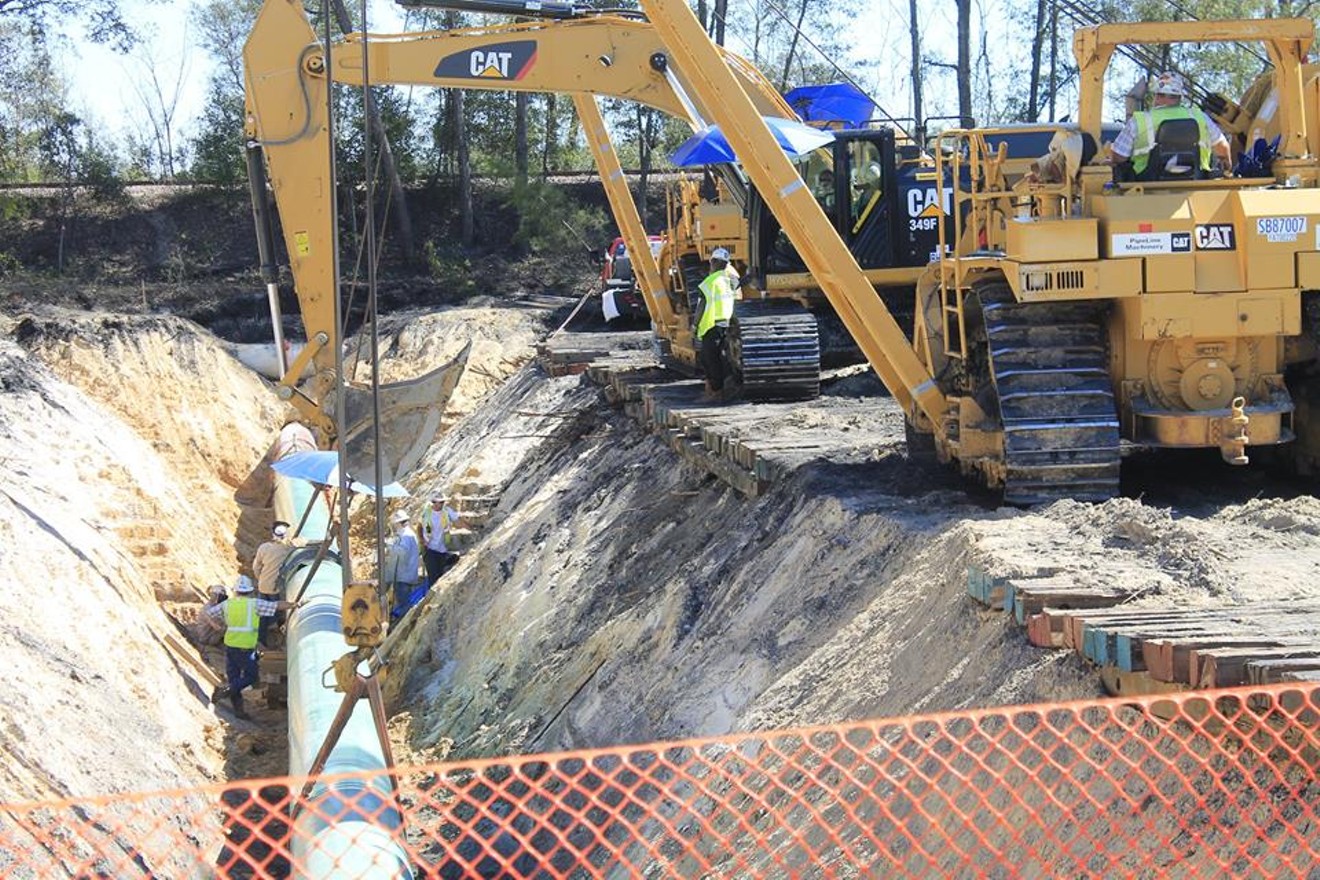 Construction of the Sabal Trail Pipeline in Marion County this past February. Courtesy of Cody Suggs

Update: Sabal Trail spokeswoman Andrea Grover says "minor technical issues" are to blame for the odorant leak. Her full statement has been posted below.

When a group called Sabal Trail began building a 515-mile natural gas pipeline from Alabama to Florida, protestors rightly worried about the possibility of a leak or explosion. All along, Sabal Trail representatives assured residents who lived by the pipeline that the risk of a gas leak was "minimal."

"The Project pipeline and associated aboveground facilities will be designed, constructed, maintained, and operated to meet or exceed the safety requirements," the company insisted.

But less than five weeks after gas began flowing through the pipeline, residents in Marion County — an area west of Ocala where Sabal Trail plans to build a giant compressor station — reported smelling a strong odor of gas in the town of Dunnellon. Earlier this month, it happened again.

Incident reports obtained by New Times tell the rest of the story: The first leak was reported July 16, when residents called 911 worrying that natural gas was seeping from the pipeline. The local fire-rescue department got ahold of Sabal Trail, which apparently told first responders that "this was a new system and they are still learning." A Sabal Trail technician named Dave responded to the proposed compressor site and found that one of two large tanks on the property was leaking.

The leak wasn't natural gas, thankfully, but the Marion County hazmat team still detected mercaptan — a stinky substance that's sometimes mixed with natural gas to give everyone a when there's a leak — at more than ten times the level the government says is "immediately dangerous to life or health."

Though harmless in small quantities, mercaptan at higher doses can cause problems for the respiratory system and the central nervous system, according to the Occupational Safety & Health Administration. Yet Sabal Trail's solution, according to fire-rescue reports, was to "wrap the area with towels and spray a deodorant," saying someone would stop by in the morning to fix the leak.

The site of the odorant leak in Dunnellon.
via WWALS
The second leak in Dunnellon was reported August 5. According to an incident report, the same technician told the local fire department that there had been another mercaptan leak and that Sabal Trail was handling it.

The WWALS Watershed, led by Suwannee Riverkeeper John Quarterman, has long fought the pipeline, expressing concern that gas could leak into Florida's rivers or even its aquifer. After Quarterman wrote a number of government regulatory agencies complaining about the mercaptan leak, Sabal Trail responded in a letter that it planned to fix the odorant tanks, adding there's no requirement to report odorant leaks to the public.

Quarterman, meanwhile, says it's inexcusable that Marion County Fire Rescue is left holding the bag while federal agencies have yet to respond.

"How can that possibly be the way things should work, that a local county is left dealing with the situation without assistance from the agencies that permitted the pipeline in the first place?" he says. "The system is massively broken."

Merrillee Malwitz-Jipson of the Sierra Club says what happened in Dunnellon is a scary reminder of how unprepared the state is to deal with a natural gas leak.

"There is no clarity on how Florida emergency personnel are going to handle transmission ruptures, leaks, and explosions," she says. "The citizens in Florida are not clear, based on this experience, on how that will be handled in a community."

Malwitz-Jipson says she worries about a potential "boy who cried wolf" situation that would lead to fire officials failing to take a real leak seriously. But Marion County Fire Rescue spokesman James Lucas tells New Times the department responds to every call as an emergency and will continue to respond to reports of gas smells in the area.

"If we get a 911 call about an odor of gas in the area, we’re going out there and responding with our hazmat team," he says. "We've toured the facility, we've designed our training scenarios around the pipeline for a natural gas leak, and we're fully prepared in Marion County to handle the full spectrum of hazmat, to include a natural gas leak or odor."

"Over the past several weeks, Sabal Trail has been working through minor mechanical issues on the above ground odorant equipment at the future compressor station site along State Route 200 near Dunnellon in Marion County. During those activities, some have smelled the odorant that is typically added to the natural gas. The tanks are permanent and store the odorant prior to it being combined with the natural gas.

Natural gas in its natural state is odorless. The US Department of Transportation, who regulates interstate natural pipelines, has regulations where odorant is required to be added.

At no time, has there been a natural gas leak from the pipeline and there is no danger to the public. Sabal Trail is actively working to permanently resolve this issue as soon as possible, and we will continue to coordinate these activities with the county’s first responders."