Focus Features
In the latest movie by Paul Thomas Anderson, Phantom Thread, Daniel Day-Lewis plays Reynolds Woodcock, a dress designer in 1950s London. As you might guess, the film’s costume designer is especially important for such a movie. Mark Bridges, who has worked with Anderson since the director’s first movie in 1996, says he felt no added pressure from the subject matter in his task for the movie.

“The attitude was more [one] of fun rather than pressure,” he says.

Bridges was in Florida this past November to accept the Golden Key for Costume Design at the sixth-annual Key West Film Festival. Before that, he won an Oscar for his work in The Artist. It's still too early to know if he will be recognized for his work in Phantom Thread, which is often shown in the film via closeups as well impressively staged wide shots of exactingly staged mise en scène.

“Peripherally, you just never know what’s going to happen,” he says about going into awards season. “There are some amazing costume films coming up this year. I think because I’m associated with Paul, and of course Daniel is just so strong and wonderful in the film, and Vicky [Krieps, the film’s lead actress], I think it’s getting noticed, and we shall see.” 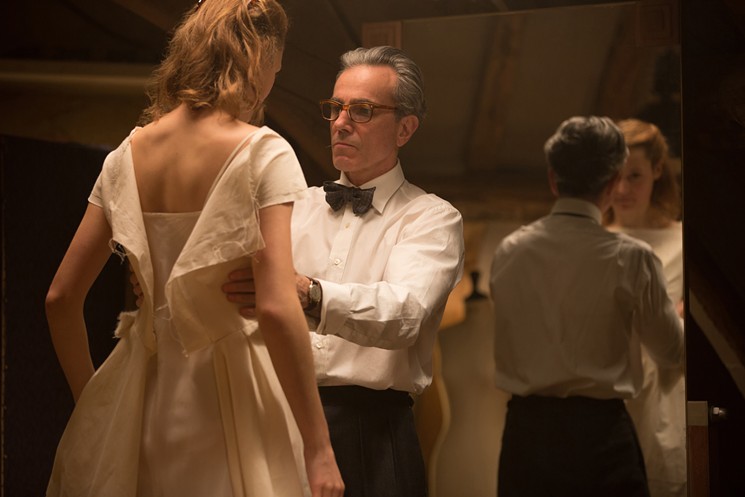 Daniel Day-Lewis in Phantom Thread.
Focus Features
The film pays close attention to the details of the time and place of the fashion scene. For instance, to make their hips more voluptuous in those days, women wore undergarments with small pads stitched just above the pelvis beneath their dresses.

“He is always fascinated by things that he researches,” Bridges says of the director, who is also well known for another famous Day-Lewis film, There Will Be Blood. “Whether it’s how an oil derrick works or how construction works on a gown, he’s got a really interested mind. I think it helps him to direct when he understands to that level of detail.”

As for Bridges’ added insight into costume design, he says Anderson never asked any more of him than he would have for his task in Magnolia or Boogie Nights. “You know, the subject matter would change from movie to movie, but my contribution would be the same from movie to movie,” Bridges insists. “I think my role is always to tell a story with the clothes and give time, place, and character — perhaps several layers down, subtlety, some kind of dramatic emphasis to the scene. That’s always my job on Paul’s movies. Bottom line: On this, it was the same.”

Bridges often compares his relationship with Anderson to family. Working with Anderson is unique, he says, because the director includes him early in the collaborative process. “You know you’re doing something special when you’re working with him,” Bridges declares, “and we get to work on it for a really long time because we’ll have meetings as he’s writing. That’s very unusual. So there’s a back-and-forth even during the writing process, and he’ll maybe want to see some pictures or we’ll look at research together or something. We just love the research stage of it as well.”

It's apparent from the conversation with Bridges that Anderson creates a healthy working environment, a rarity among directors who work with as much detail as he does. “It’s wonderful to get together,” Bridges says of the crew, which also included regulars such as editor Dylan Tichenor and score composer Jonny Greenwood of Radiohead. “I am so proud of all of the work that I’ve been able to do with Paul and proud to be his costume designer all these years, and then of course his films are so terrific. I look at the final product and think it really moves me to think that I’m involved in something so special, so that’s what keeps me coming back — that feeling of happy, grateful, satisfied, proud, and part of a family.”

Focus Features
That seems reward enough, so Bridges remains modest in any expectation for recognition by the Academy of Motion Picture Arts and Sciences come March. “Whether it catches the public’s imagination or whether it captures the attention of your peers, you just never know,” he says, repeating the final phrase several times. “You just never know, but you can just do your best and put it out there and hope somebody likes it.”