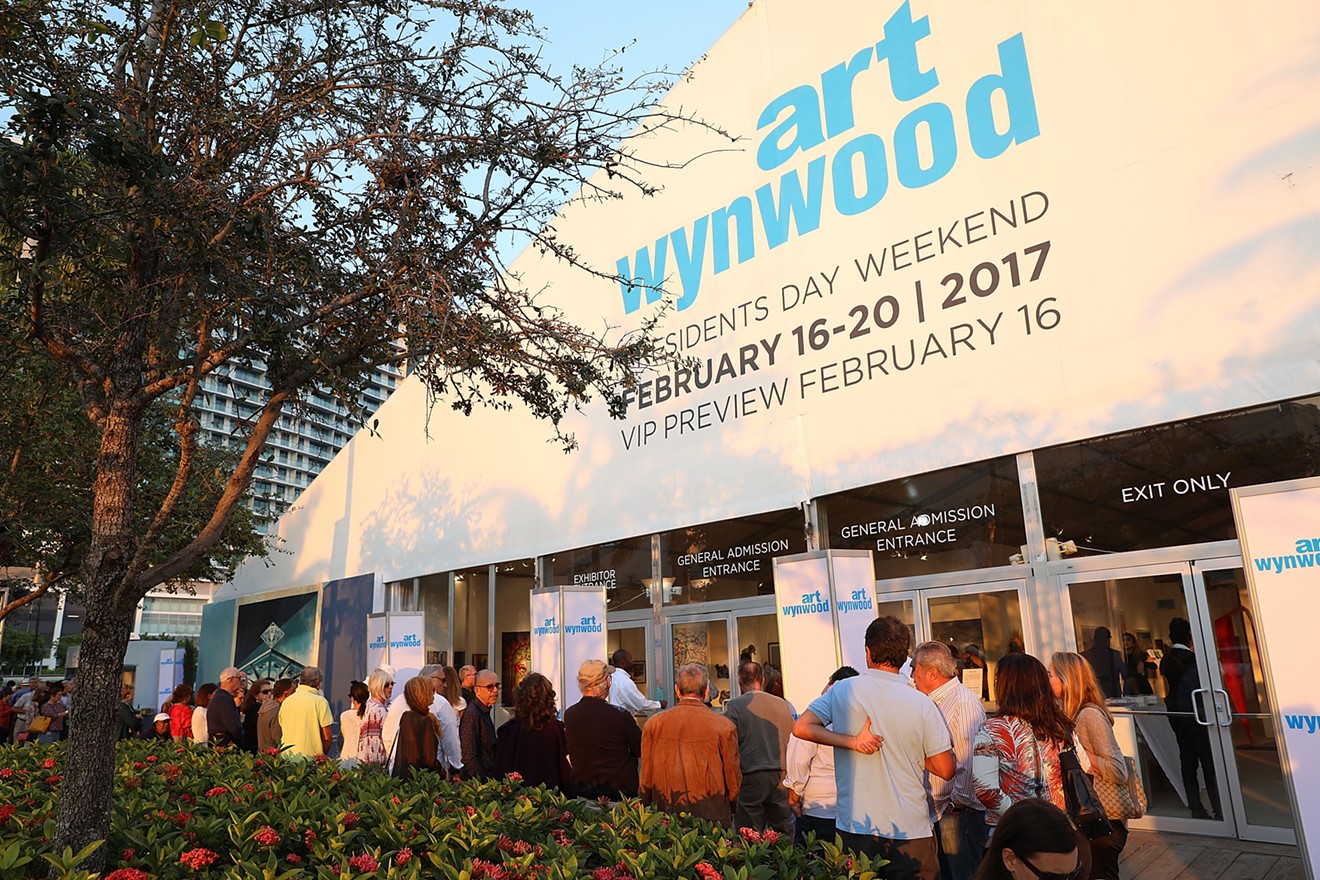 Art Wynwood in its former midtown home. The fair relocates to downtown Miami this month. Courtesy of Art Wynwood
After a hectic and exhausting Basel season, Miami’s art world is ready for its next round of creativity-based commerce. In its seventh year, Art Wynwood, a sister to the Art Miami/Context/Aqua trio of white-tent showcases, leads the new round of art fairs in 2018 by kicking off Presidents' Day weekend. Taking place in the location that housed Art Miami and Context during Miami Art Week 2017, Art Wynwood will see its biggest change this year in that it’s no longer in or close to Wynwood.

“Once you have your identity, it’s OK to keep it as you move. It happens in all industries. There are department stores with 'New York' in their names and they open in different places,” she says. “Art Wynwood has that [Wynwood] vibe, and that vibe won’t change. The personality of the fair is not changing... because of the location. It’s still in the heart of Miami; it’s not like it’s moving to another county.”

For 2017's Miami Art Week, Art Miami LLC uprooted its popular mainland-Miami fairs — Art Miami and Context Art Miami — from their long-standing midtown location, relocating them to a lot wedged between the Venetian and MacArthur Causeways. The company signed a multiyear lease for the site at 1 Herald Plaza and poured a 250,000-square-foot foundation in preparation for the fairs in December. Details such as the exact length of the lease and whether other tenants will be permitted to use the site are confidential, says Nick Korniloff, executive vice president and partner at Art Miami LLC.

“The most important thing my team learned [this past Miami Art Week] is that the right location is vital to a successful fair,” Korniloff says. “The location was the most important piece of real estate and the last at the waterfront in the downtown city of Miami.”

Moving is a stressful activity for anyone, especially for a vendor-based multimillion-dollar operation with a nearly decade-old home in midtown. Still, Korniloff insists the transition went smoothly. “We really had no challenges, as my team was prepared for any setbacks or unexpected issues. We prepped for months to ensure that if anything went wrong, we could handle it on the spot.”

Korniloff cites downtown’s urban infrastructure and amenities as some of the biggest benefits of the fairs’ new home, saying the proximity to the Venetian and MacArthur allowed the fairs’ visitors to commute easily from Miami Beach. With the upcoming Art Wynwood fair approaching, Korniloff says his team will “rely on that easy connectivity to Miami Beach, Key Biscayne, and the Grove allowing Art Wynwood to share an audience with the Yacht & Brokerage Show, Boat Show, and Coconut Grove Arts Festival” that also take place over the holiday weekend.

Art Wynwood can be thought of as Art Miami’s younger, cooler sister. The fair takes place in the reconfigured pavilion from last year's Context fair. Though Art Miami hosted more than 80,000 guests this year, Art Wynwood saw fewer than half of that number over the five-day event last year.

“Art Wynwood was developed to be, as Nick says, ‘the second bite of the Art Miami apple,’" Orihuela explains. "It’s modeled after Art Miami, but it’s purposefully much smaller. Visitors can be slower, more relaxed, and not in a rush... It’s smaller, more intimate, and more boutiquey.”

But visitors to Art Wynwood can also expect to find more traditional art at the fair, such as Édouard Manet’s undated The Christ as Gardener, which is valued at $4.3 million, and other secondary and blue-chip works. The fair will include more than 180 artists and 70 galleries that represent countries in Asia, North America, South America, and Europe.

“People walk at a different pace and engage in a different way [than during Miami Art Week],” Orihuela says. “Exhibitors say they have lovely conversations with people... they remember the people they spoke to. It’s not just about the immediate sale... it’s about creating connections.”