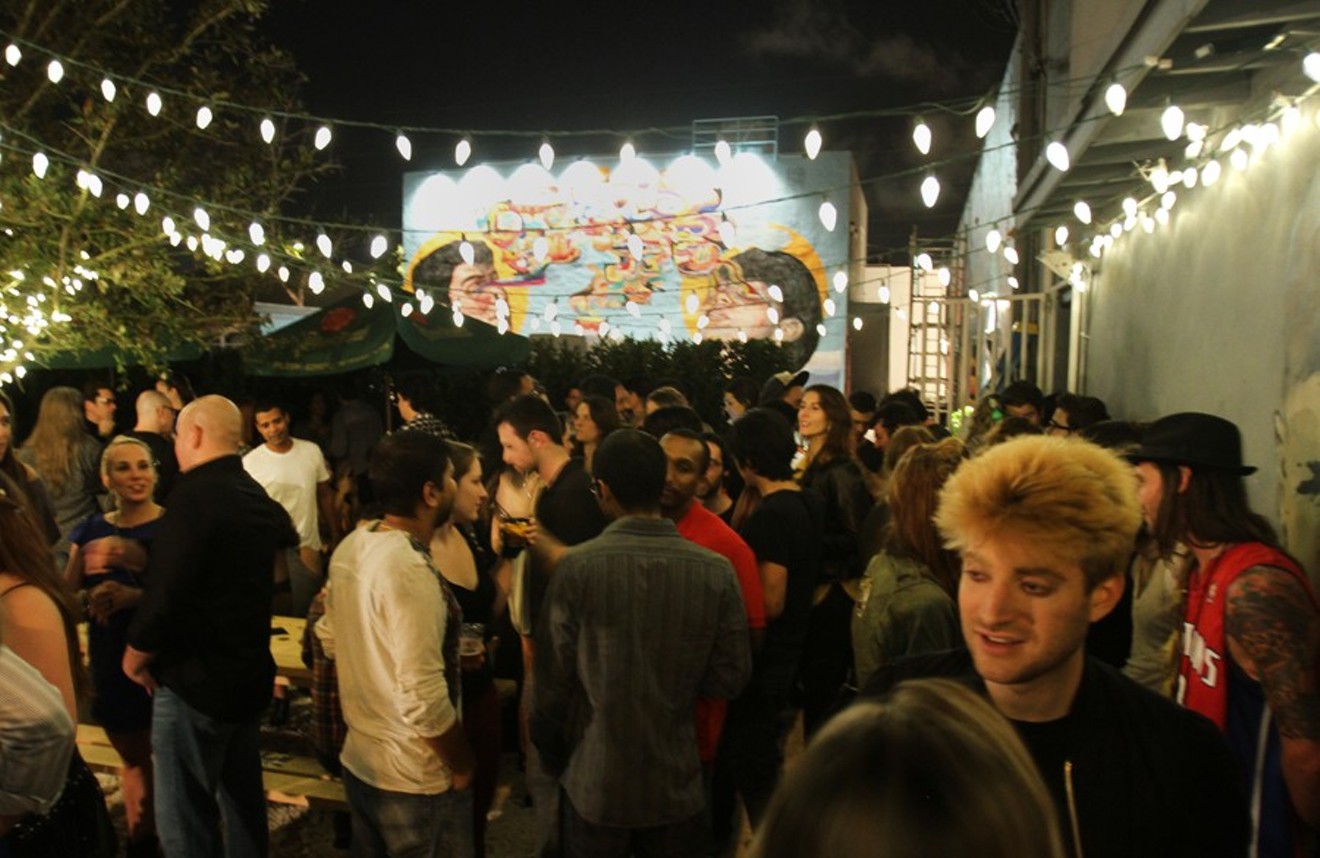 Opening night at Wood Tavern nine years ago. Photo by Logan Fazio
Nine years ago, Cesar Morales told New Times he wanted to create a bar to please the common people. He succeeded with Wood Tavern, the dive bar that managed to stay true to Wynwood's vision of a bohemian paradise even as the neighborhood around it became increasingly gentrified.

Now Wood Tavern is closing, a casualty of the restaurateur's version of the "New Normal": a lethal ratio of rent to revenue.

"We're down as much as 90 percent from last year. We're also paying a premium rent. When the place was packed pre-COVID, it was okay, but it's impossible to stay open with such a drastic dip in sales," the owner says.

Morales says that while he agreed with — and complied with — state and local COVID mandates, they made it difficult to keep a bar open.

"We had lines to get in during the weekend, but we can't let people in if we're at seating capacity," the bar says, explaining that while Wood's official capacity is 440, all patrons must be seated and the venue has only about 100 tables and 200 seats.

Add a curfew to the mix, along with a ban on music played above speaking level, and it's not exactly a recipe for success. Playing by the rules, Morales says, meant "no dance floor, the music is low, and the vibe is gone."

Ordering drinks via an app minimized human contact but also human interaction, chilling the most crucial tavern relationship: the one between bartender and customer.

"It's cold," says Morales. "When you go to a bar, you don't want to order from your phone."

He considered raising drink prices, maybe configuring a VIP area or charging a cover. He quickly discarded those ideas.

"If I changed prices and started to charge a cover, it wouldn't be Wood any more. To me, that would have been sadder than closing Wood's doors."

He decided to set a date rather than watch his bar slowly die. He broke the news to his employees yesterday: March 14 would be the Wood's last day.

Wood Tavern, along with two of Morales' other ventures on the same Wynwood block — Valentina's Pizza and BND Burger — are set to close in two weeks. Morales' Miami Mojito Company, also located along that stretch of NW Second Avenue, will remain open for a few months, maybe more.

There is some rebirth to look forward to.

On St. Patrick's Day, March 17, Morales will open Pizza and Beer a few blocks to the south, on NW 23rd Street. The 7,500-square-foot establishment will offer a simple menu of Neapolitan pizzas, cocktails, and beer. Wood employees have been invited to staff the new restaurant, meaning no jobs will be lost.

"If I kept Wood Tavern open for a few more weeks or months, I would have had to staff Pizza and Beer and then lay off the Wood Staff," Morales says. "That would be 30 to 40 people without a job. Realtors were already showing Wood Tavern to prospects and it was just a matter of time, anyway.

"We opened in November 2011," he adds with evident nostalgia. "There really wasn't much here except for Panther Coffee, Joey's, and Wynwood Kitchen & Bar. It was exciting back then."

Now Wynwood is going through what Morales calls "a second level of gentrification," wherein restaurateurs from New York and Los Angeles are snatching up property. "The places coming up now cater to a different demographic," he notes.

In that same light, Morales hasn't given up on Wood Tavern completely. He envisions a return of the bar — possibly in Allapattah, where rents are still somewhat reasonable. Morales already operates Las Rosas Tavern, as well as a restaurant, Tayrona, in the neighborhood that lies just to the west of Wynwood.

Still, it couldn't ever be exactly the same.

"I was looking at all the messages people were leaving on Instagram," Morales says. "People fell in love here. People came here with friends. I'm seeing Wood Tavern all over again through other peoples' eyes."

If you're looking to toast some memories yourself, there's still time to hoist a few at Wood Tavern.

Wood Tavern. 2531 NW Second Ave., Miami; 305-748-2828; woodtavern.com.
KEEP MIAMI NEW TIMES FREE... Since we started Miami New Times, it has been defined as the free, independent voice of Miami, and we'd like to keep it that way. With local media under siege, it's more important than ever for us to rally support behind funding our local journalism. You can help by participating in our "I Support" program, allowing us to keep offering readers access to our incisive coverage of local news, food and culture with no paywalls.
Make a one-time donation today for as little as $1.