"We're Trying to Hang On": Miami Bars Await Their Shot at Reopening 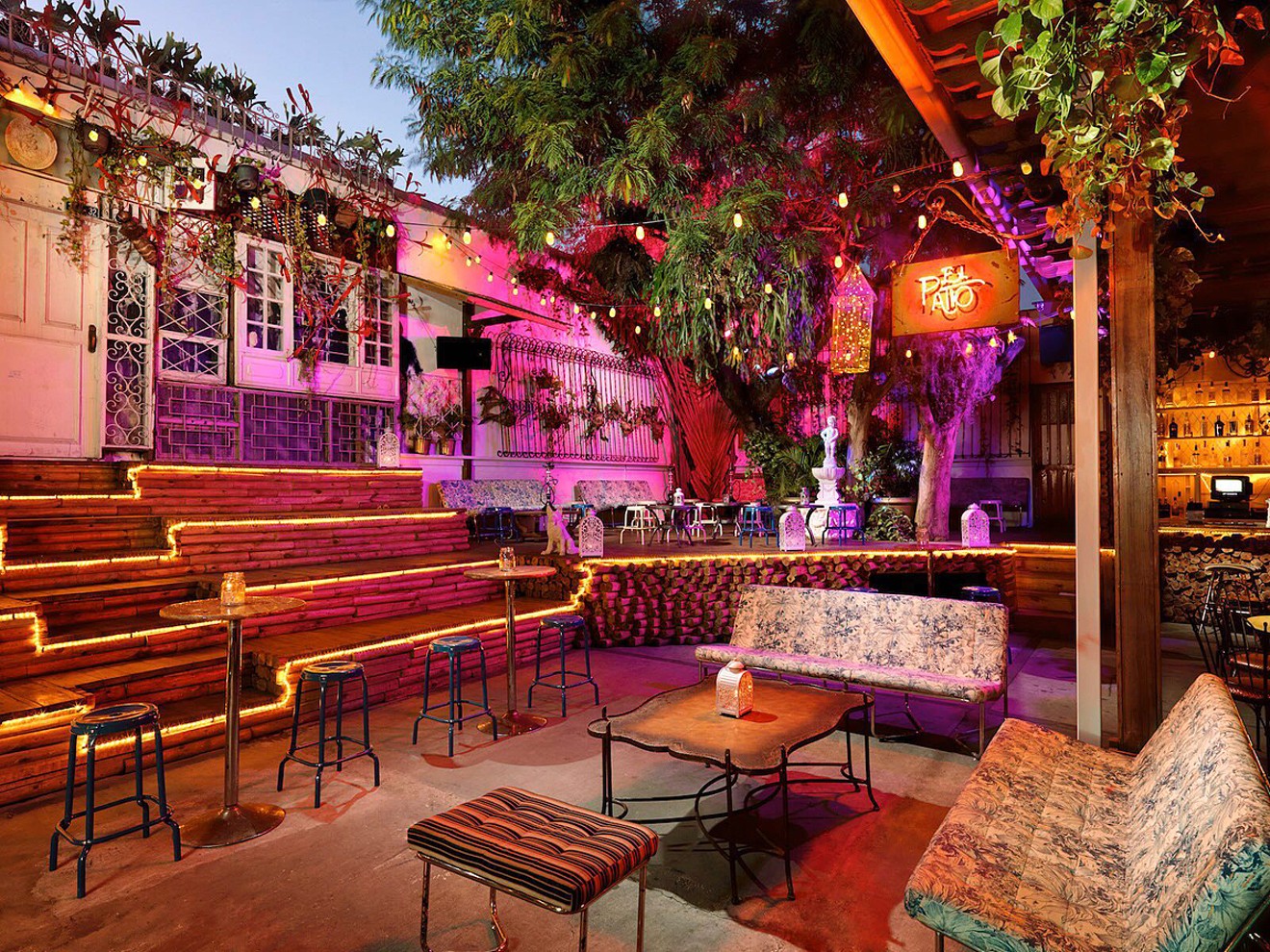 The owners of El Patio are in the process of making masks with a zipper and small opening that would allow people to sip their drinks without removing their face covering. Photo courtesy of El Patio Wynwood
Almost as soon as bars were ordered closed in March to curb the spread of the novel coronavirus, Philippe Kalifa, co-owner of the bar El Patio Wynwood, got to work on $20,000 in renovations in anticipation of his business reopening.

Kalifa and his business partner installed infrared thermometers and hand-sanitizer stations, bought protective equipment for staff, and converted the furniture into private booths enclosed in wood-framed sheets of Plexiglas. The bar, DJ booth, and hostess stand were reinforced with Plexiglas. Kalifa wishes the décor looked better, but in terms of keeping people separated and in small groups, it got the job done.

El Patio also set up a notification system to text patrons when their table is ready, signs that prompt diners to wear their masks, and floor markers to remind them to distance themselves from others.

"These were investments we were willing to make even in a tough time when money was difficult," says Kalifa, who is also president of the Wynwood Restaurant and Bar Association. "We invested in all of that because we know we're going to be in this for the foreseeable future."

When news began to circulate in late May about the possibility that bars could reopen because of a decrease in COVID-19 infections and hospitalizations, Kalifa felt ready.

But no bar in Miami-Dade was allowed to reopen for on-site alcohol consumption, even as those elsewhere in the state opened in early June and closed again later in the month because of noncompliance with safety guidelines.

The Florida Department of Business and Professional Regulation (DBPR), which oversees licensing and regulation for various businesses, announced earlier this month that bars once again can do business under various COVID safety guidelines. But Miami-Dade County Mayor Carlos A. Giménez said bars in the county probably won't open until an effective vaccine for the coronavirus is available. The mayor subsequently backtracked and said he'd discuss the matter with the county's medical experts with an eye toward allowing bars to open sooner.

With the fate of Miami's bars in limbo, owners say they want their shot at reopening and saving their businesses from financial ruin.

Johnathan Wakefield, owner of J. Wakefield Brewing, says taproom and keg sales to bars and restaurants were his business' major sources of revenue. With the taproom closed and outside sales at a near standstill, he shifted production entirely to carryout. But the new business model isn't cutting it; the brewery is making just enough money to cover payroll, rent, and the cost of grain.

Wakefield and his father put their savings into opening the brewery. Neither wants to see it close permanently.

"We're not making money by any means. We're trying to hang on for as long as possible," Wakefield says. "We're still operating with the model that we have now, but if it continues at this rate and we're given no reprieve and no outlook, will we make it another year? I don't know. I hate to say no, but probably not."

Wakefield says he and his father feel responsible for the employees and don't want them to go without paychecks. They laid off some bartenders and an employee who did outside sales, but he says he has kept most of his staff. The federal Paycheck Protection Program (PPP) loan he received covered payroll for a month.

"Maybe it's not a smart idea, businesswise, because overhead is high and revenue isn't, but I don't want these guys going on without their jobs." — Johnathan Wakefield

"I've tried to keep everyone employed," Wakefield says. "Maybe it's not a smart idea businesswise, because overhead is high and revenue isn't, but I'm trying to do the best I can for employees. I don't want these guys going on without their jobs. It's frustrating because you get no help. I'm trying to help the people that work for me, but where's the help on the other side of this thing? There is none."

Bar and nightclub owners say they're willing to jump through every hoop necessary so they can reopen in some capacity. Megan and Behrouz Nazari, owners of the Miami Beach nightclub Do Not Sit on the Furniture, built an outdoor deck to provide more space for guests. The two are paying out of their own pockets to keep the place afloat until they can welcome patrons back.

"We're going to be heavy in debt, but when you love something so much, you take risks," Megan Nazari says. "That's what we're doing."

Medical experts say bar owners are in the unenviable position of running businesses that have a likelihood of increasing COVID-19 infections and potential super-spreader events. Despite the precautions, they say, the risks are too great for bars to reopen.

Dr. Aileen Marty, a public-health expert and infectious-diseases professor at Florida International University's Herbert Wertheim College of Medicine, has pointed to data from other nations showing that bars and clubs "have been sites of major, major clusters for COVID-19."

South Korea, France, and Italy have reported clusters, which typically begin with one person testing positive for COVID-19 days after visiting a bar or nightclub and, through contact tracing, are linked to scores of others who become infected. Dr. Anthony Fauci, the U.S.'s leading infectious-diseases expert, has said going to indoor bars is one of the riskiest things people can do.

Still, bar owners wonder how gyms, strip clubs, and movie theaters — all of which have reopened — are any safer.

"People tend to — especially in restaurants and bars — be in groups," Adirim explained last week in an interview with New Times. "If you're drinking, you're less likely to be careful about social distancing, whereas in a gym, presumably, you're not drinking, you tend to be by yourself, and you're wearing a mask."

That leaves bar owners with impossible choices when considering public-health concerns, the viability of their businesses, and their own financial responsibilities — and with no end or substantial help in sight.

"It's such a tender situation. Nobody wants to hurt anybody. We're all afraid that someone gets coronavirus and something happens." — Dan Binkiewicz

"It's such a tender situation," says Dan Binkiewicz, owner of Blackbird Ordinary, Sweet Liberty, Mama Tried, and the Bar. "Nobody wants to hurt anybody. We're all afraid that someone gets coronavirus and something happens. We don't want to hurt anybody. It's just a difficult decision."

Aside from the Bar in Coral Gables, which has a full kitchen and serves food, all of Binkiewicz's establishments remain temporarily shuttered. Sweet Liberty, which also serves food, reopened for a short period but closed again because it has no outdoor seating.

Binkiewicz says he wouldn't reopen Blackbird Ordinary and Mama Tried yet even if the county were to allow it. He worries about bars rushing to reopen, only to be shut down because of a spike in COVID cases. Some businesses might not survive closing yet again. Either way, Binkiewicz believes opening bars under an 11 p.m. countywide curfew with 50 percent capacity will cause more harm than good.

"It's hard enough to make it and survive or make money under normal conditions," he says. "Fifty percent occupancy and a curfew is a death sentence. This is a game about losing less money. For me, losing less means staying closed."

For others, losing less means opening, even under the capacity strictures and reduced hours.

Last week, Kalifa, the El Patio co-owner, helped organize a protest in Wynwood to call attention to the impacts of six months of bar closures. He says he hopes officials like Giménez will listen to the concerns of business owners and at least engage them in conversation to find solutions. Kalifa says he has been waiting for more than a week to speak to Giménez about a plan for bars.

"We've never said that we wanted to reopen at full capacity and close at 3 a.m.," Kalifa tells New Times. "We know that’s not possible. We said: Please give us the same requirements and restrictions as restaurants, where we can serve people at tables, close at curfew, and see how it works. We're asking to work hand in hand with our officials, exchange ideas, and come up with a plan together. Let's hope we're able to do that. We're not asking for the moon."

(New Times news editor Jessica Lipscomb contributed to this story.)
KEEP MIAMI NEW TIMES FREE... Since we started Miami New Times, it has been defined as the free, independent voice of Miami, and we'd like to keep it that way. With local media under siege, it's more important than ever for us to rally support behind funding our local journalism. You can help by participating in our "I Support" program, allowing us to keep offering readers access to our incisive coverage of local news, food and culture with no paywalls.
Make a one-time donation today for as little as $1.