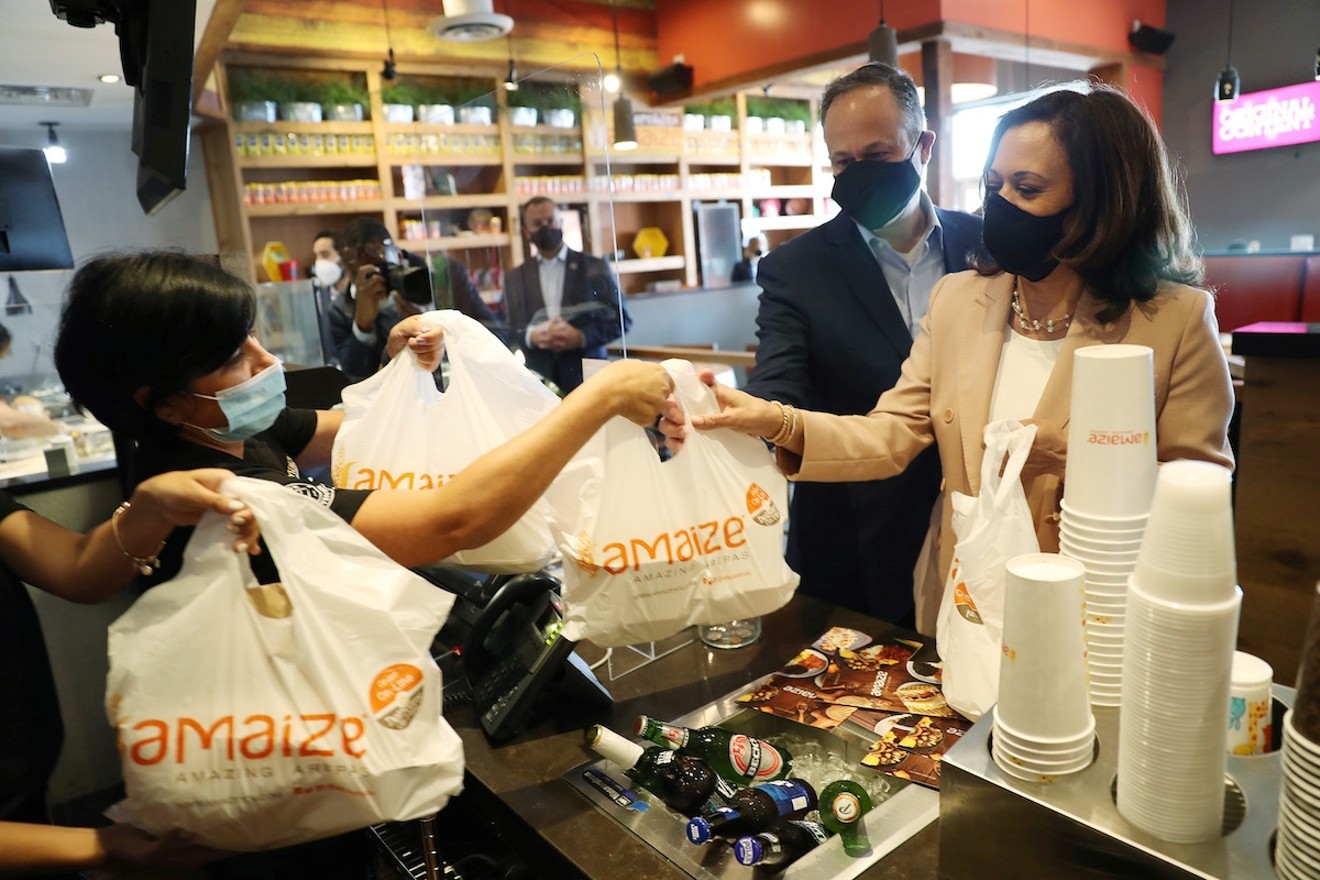 Democratic vice-presidential candidate Kamala Harris and her husband, Doug Emhoff, pick up their order at Amaize in Doral. Photo by Joe Raedle/Getty Images
Kamala Harris touched down in Miami just before 1 p.m. yesterday, headed for a long day of meetings and fundraisers.

The vice-presidential candidate planned several stops in key battleground neighborhoods in Miami-Dade County, including a meeting with community and political leaders at Florida Memorial University in Miami Gardens and a stop in Aventura, where Harris and her husband, attorney Doug Emhoff, would speak with rabbis and prominent Jewish political figures.

But first, a stop for some Venezuelan comfort food at Amaize in Doral.

When Harris and Emhoff arrived at the restaurant with Florida state Sen. Annette Taddeo and political pundit Ana Navarro, they were greeted warmly by the surprised patrons.

According to the press pool following the entourage, one patron greeted Harris by saying, “Welcome to Doralzuela,” employing the community's local nickname, which speaks to its large population of Venezuelans.

Harris spoke in Spanish to a group seated at another table and could be heard thanking them before adding in English, "There are so many important issues." Harris posed for selfies with them and other guests — everyone wore masks — before she and her husband placed a large to-go order for arepas and tequeños.

One of the diners who spoke with Harris, Venezuelan Carlos Andrade, 40, told a member of the press pool that he was "super excited" to see the senator. "We were hopeless and Biden is the solution for the country. Many of the people who have lived in this country for many years, we are not supporting Trump," Andrade was quoted as saying in Spanish.

"You have to pay attention to public opinion because many of the people who are speaking out in favor of Trump are not voters," he added.

Harris was inside the restaurant for about five minutes. As she got into her car afterward, a woman holding a pro-Trump sign stood in the parking lot, shouting. The woman, who identified herself as Mariela Jiménez, told reporters that "Kamala Harris represents communism and socialism."

If you want to eat like Kamala Harris, Amaize has locations in Doral and Davie and specializes in arepas like the "Beauty Queen" arepa, stuffed with creamy chicken and avocado salad ($6.99) and the "Shaggy" arepa, filled with shredded beef and cheese ($7.99).

Amaize. 3887 NW 107th Ave., Doral; 786-542-1559; and 2258 S. University Dr., Davie; 954-740-8999; amaizeyou.com.
KEEP MIAMI NEW TIMES FREE... Since we started Miami New Times, it has been defined as the free, independent voice of Miami, and we'd like to keep it that way. With local media under siege, it's more important than ever for us to rally support behind funding our local journalism. You can help by participating in our "I Support" program, allowing us to keep offering readers access to our incisive coverage of local news, food and culture with no paywalls.
Make a one-time donation today for as little as $1.