Tran An: Vietnamese Comfort Food for Well Under $20 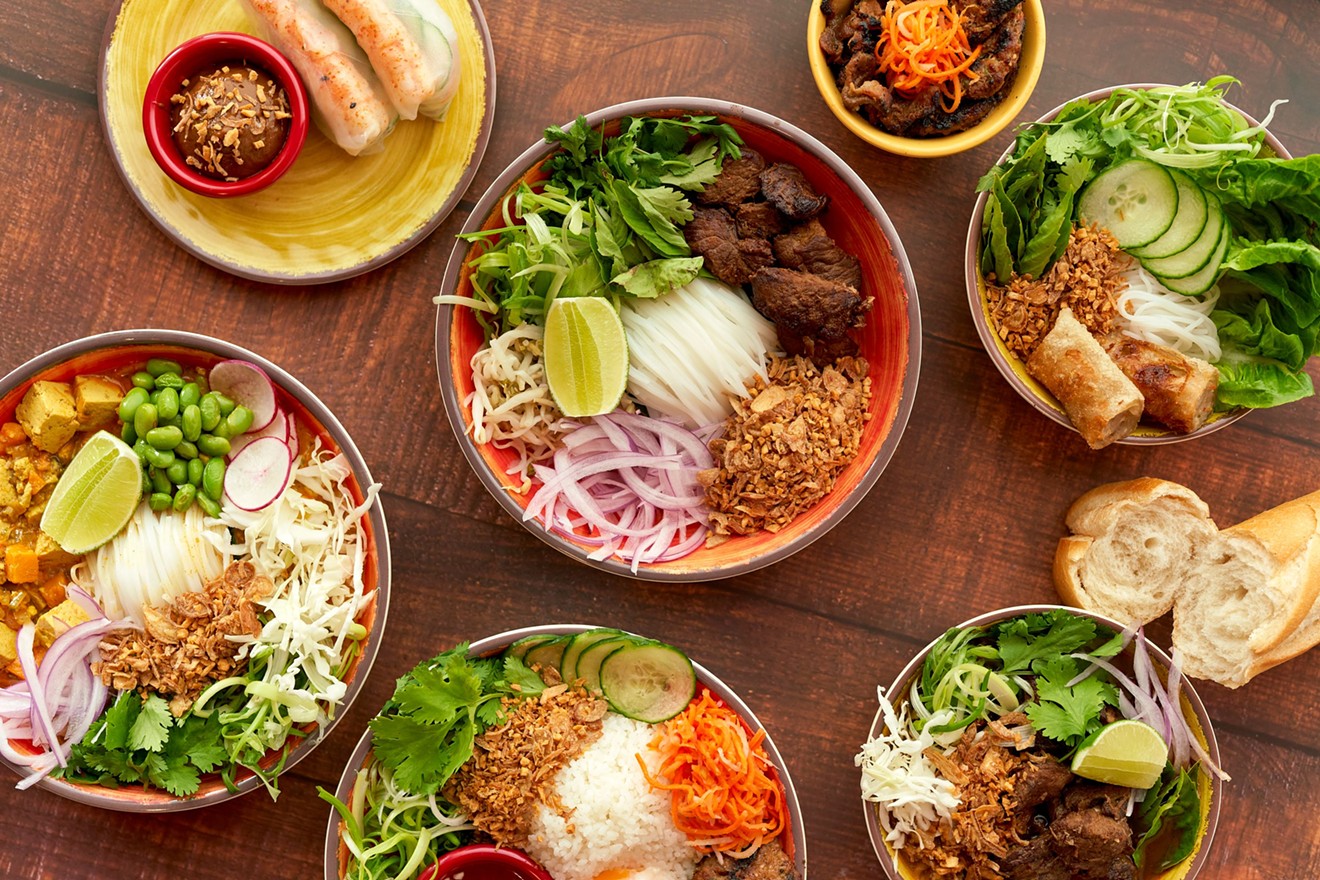 Tran An's phos and rice bowls. Photo by Ruben Cabrera
MIA Market, the Design District food hall, may have gone through several name changes (it was formerly known as St. Roch Market and Politan Row), but one thing is certain: It has been home to some of Miami's best concepts — including Itamae, where Valerie Chang has received several James Beard nods for her work at the family-run Peruvian-Nikkei restaurant.

Jon Nguyen's Tran An also started out at the market, offering bánh mì sandwiches, pho, and spring rolls. But the chef, whose résumé includes a stint at Danny Meyer's restaurant at the Museum of Modern Art in New York City,  decided to open a standalone version of the Vietnamese street-food concept he named after his grandfather, in addition to the original Tran An, which remains at the food hall.

Having settled on an 18-seat restaurant space at a newly renovated strip mall in the northern part of Little Haiti, Nguyen was preparing to open when the pandemic hit (shutting down the food hall in the process). Nguyen says he remembers that day — March 18 — vividly.

"That morning, my staff came in and we cleared out the cooler. I had no idea when we would reopen, so I told my employees to take all the food home to their families," Nguyen recounts. He tried to open for takeout only in April, but business was too sporadic. So he turned all his attention to making sure his Little Haiti restaurant was ready by the time restrictions lifted. "We took our time to get everything perfect, but basically from March to July there was no income, which was a crazy thing."

On July 20, when Nguyen got the OK to open, he started tentatively, with his takeout window. "We got instant traction," he reports. By October he'd decided it was time to open the dining room.

Though tiny, the indoor space packs a lot of personality: gilded faux animal heads smile down upon diners as they happily slurp noodles to a soundtrack of Billy Joel and the Bee Gees. A few picnic tables decorated with greenery and string lights comprise the outdoor seating.

Start with an order of shrimp chips ($4.25). Squeeze on some lime juice and listen as the colorful little crisps crackle like a bowl of Rice Krispies. Although the chef assures that all the chips are the same, for some reason the pink ones seem to taste better. Other starters include a tangy green papaya salad ($8.75), spring rolls, and a Vietnamese chicken slaw seasoned with "Grandma" sauce — a tangy mixture of vinegar, garlic, fish sauce, and chilies. (You can buy a bottle of the sauce for $9.50.)

Main dishes are comforting and eminently shareable. "Tran An Chicken Rice" combines rice cooked in chicken-bone broth with confit chicken, white cabbage, red onions, and spices ($16.75). The beef in the lemongrass braised beef stew ($17.75) is melt-in-your-mouth tender. Nguyen recalls his mother making the dish for him as a child from a recipe she brought over from Saigon. The stew, says the chef, is a Vietnamese interpretation of a classic French beef bourguignon. "This style of stew only exists in the northern part of Vietnam. It's a result of the French colonization of Vietnam."

The vegan pho at Tran An.
Photo by Ruben Cabrera
Phos come in chicken ($15), beef ($15.75), and vegetable with a vegan broth ($13.75). No matter which you choose, expect a giant bowl of rich broth, a generous helping of rice noodles, and plenty of meat or vegetables.

Bánh mì sandwiches ($9.25 to $12.75) start with baguettes from La Provence bakery and are filled with shrimp, chicken, pork, beef, or vegetables.

Bottom line: If you have a $20 bill, you can get a full meal — maybe even with leftovers for the next day.

Nguyen says he designed the menu to be affordable — and accessible — to everyone who comes in. And he adds that even though the recipes are his mother's from Vietnam, he's not looking to hew to authenticity. "Everything draws on nostalgia and comfort," says the chef. "Yes, we serve Vietnamese food, but it may not be the same Vietnamese food that's served in restaurants in California or Toronto."

Nguyen prefers to focus on universal appeal. "People are gravitating toward our cuisine because at the end of the day it's about sandwiches and stews and soups," he says. "Who doesn't like a nice bowl of warm chicken noodle soup? We just put some different spices in it and we call it pho, but it has the same love and care that you equate with any good bowl of chicken noodle soup. And it's delicious, actually."

Nguyen is working on acquiring a liquor license, but in the meantime, Tran An serves no alcohol. There's a wine store a few doors down, however, and patrons are welcome to bring in beer or a bottle of wine ($10 corkage fee).

In the coming months, Nguyen will open a market in the space next door, stocking the shelves with items from local vendors in the hope of giving a leg up to other Miamians with a dream. "I always wanted to create a platform for other small businesses. During the pandemic, there were bartenders baking bread and cooks making pizza," he says. "All these people doing what it takes to survive. I would like to think this space is a sanctuary for people who want to make something good."

He says he's naming the market Dyl's, after his two-year-old son, Dylan, who's living in Boston. "Being away from my son gives me a perspective. I'm all alone here in Miami doing everything. I have no partners, no investors. I want my son to know I'm here hustling for him so he can have a future. I want him to see what I've built and that I'm doing this all for him."

Tran An. 215 NE 82nd St., Miami; 305-905-5006; trananmiami.com. Monday to Saturday noon to 10 p.m., Sunday noon to 6 p.m.
KEEP MIAMI NEW TIMES FREE... Since we started Miami New Times, it has been defined as the free, independent voice of Miami, and we'd like to keep it that way. With local media under siege, it's more important than ever for us to rally support behind funding our local journalism. You can help by participating in our "I Support" program, allowing us to keep offering readers access to our incisive coverage of local news, food and culture with no paywalls.
Make a one-time donation today for as little as $1.