The Oasis, an Outdoor Venue With Food, Drinks, Art, and Music, Will Open in Wynwood 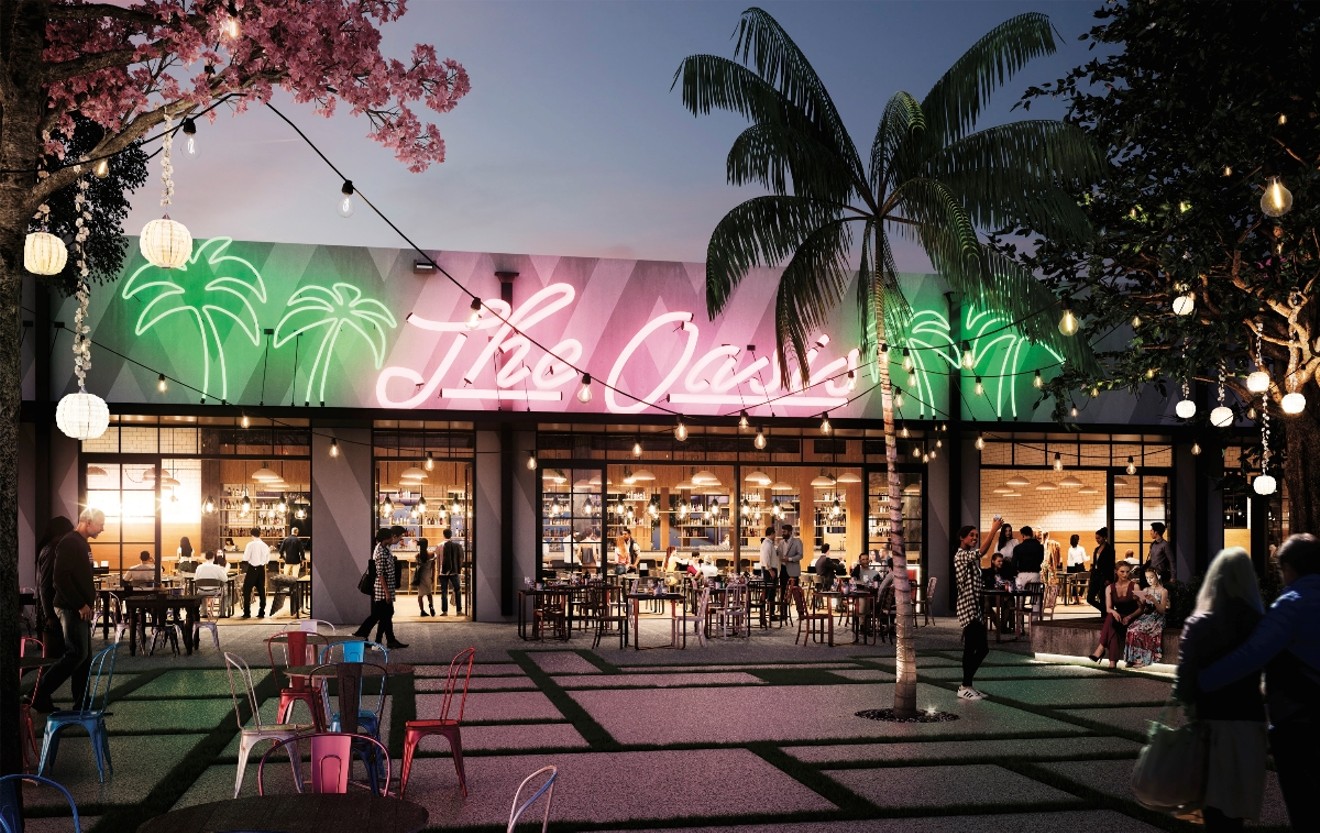 The Oasis will offer food, cocktails, music, and more in a garden setting. Rendering courtesy of the Oasis/Carma Connected
Travel through a valley of oak trees and you'll find the Oasis.

Tucked just off North Miami Avenue in Wynwood, the new venue will offer food, music, cocktails, art, and community events in a space surrounded by trees and greenery.

Set to open next month, the Oasis will offer 35,000 square feet of outdoor space and an additional indoor area that will house several retail establishments, a café and a fitness studio, a lounge called Huacachina, and Spotify's Miami headquarters, according to project developers Erik Rutter and David Weitz.

Rutter tells New Times the outdoor area will house several shipping containers that were retrofitted with custom kitchens for each of the culinary concepts. The shipping container idea came from the fact that the property once served as a repair site for the shipping industry. "The shop repaired the giant engines on cruise ships."

The Oasis' tower bar will also be constructed from shipping containers and will feature a mural by Spanish artist Antonio Marest.

Rutter and Weitz tapped the expertise of Coyo Taco and 1-800-Lucky cofounders Sven Vogtland and Alan Drummond to manage the culinary and entertainment programs at the Oasis. The food concepts include Miami favorites as well as some New York transplants:

Alidoro. An NYC sandwich shop will offer Italian food (including 20 different sandwiches), cocktails, and its own rosé prosecco.

Buya Dumplings + Buns. The team behind Buya Izakaya and Buya Ramen in Miami will offer Asian street fare including gyoza and steamed bao.

Los Buenos. The people behind Coyo Taco will offer tacos made with hand-pressed tortillas, as well as burritos and quesadillas.

Mr. Mandolin. The creators of Mandolin Aegean Bistro offer a fast-casual version of their Mediterranean menu, including gyros, kebabs, and salads.

The Oasis will also host a music series, says David Weitz. "We have a large stage on site and we plan to do live music five nights a week from pop to classic rock to hip hop. We want to offer all kinds of music. We don't want to be pigeonholed into one kind of music."

In addition to music, Weitz says the stage will be open to everything from poetry slams to live comedy to community events. "We are looking to activate the space 365 days a year, morning, noon, and night."

Weitz and Rutter are also working to create a safe space for guests at the Oasis. Masks will be required for all employees (and guests when not seated), and hand-washing stations will be scattered throughout the venue. The entire space will be sanitized on a regular basis and seating will be socially distanced. A designated safety officer will be on hand to enforce compliance.

Oh, and the Oasis is a dog-friendly space, so you and your best friend can enjoy a day out.

The Oasis. 2335 N. Miami Ave., Miami. oasiswynwood.com. Opens April 2021.
KEEP MIAMI NEW TIMES FREE... Since we started Miami New Times, it has been defined as the free, independent voice of Miami, and we'd like to keep it that way. With local media under siege, it's more important than ever for us to rally support behind funding our local journalism. You can help by participating in our "I Support" program, allowing us to keep offering readers access to our incisive coverage of local news, food and culture with no paywalls.
Make a one-time donation today for as little as $1.