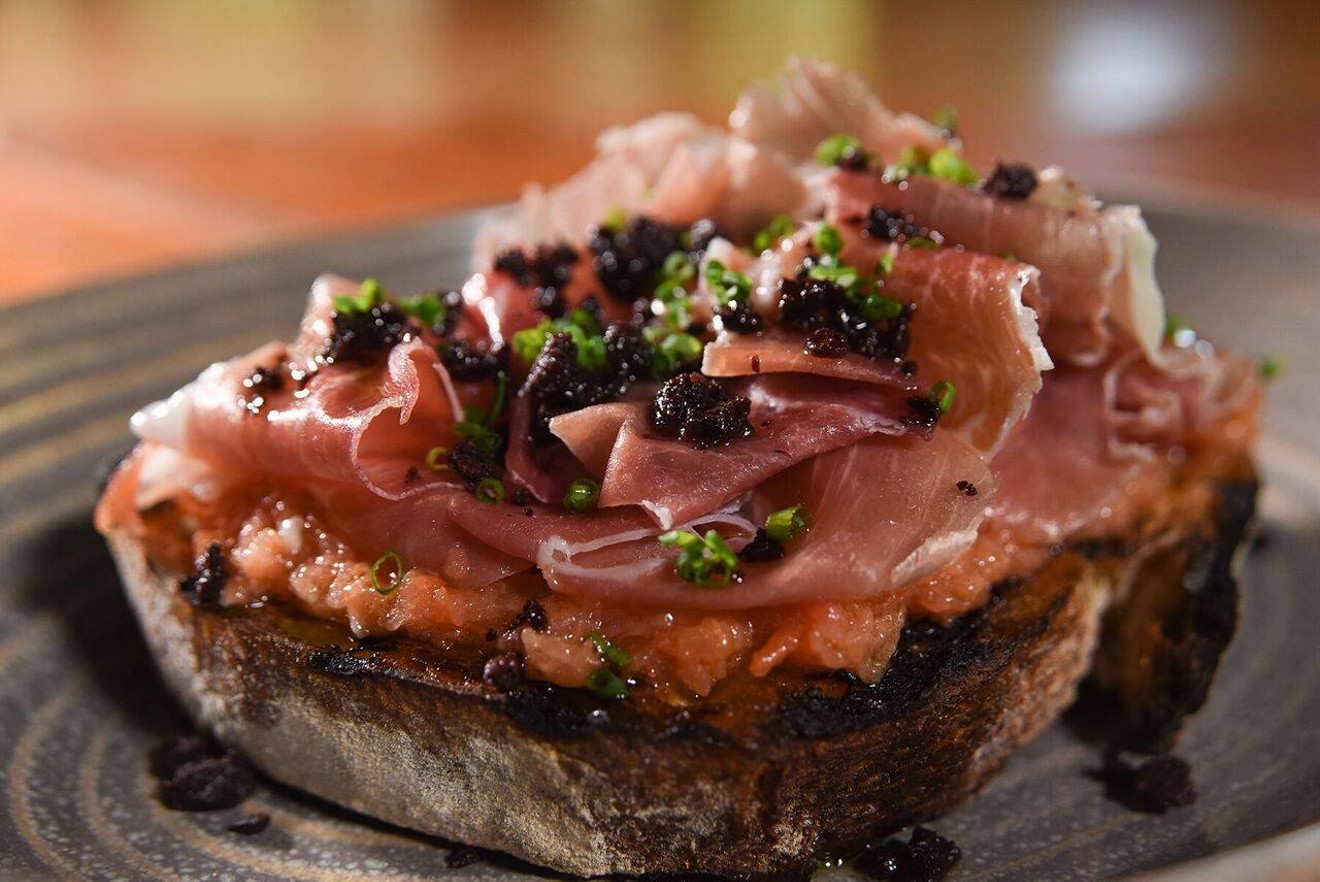 Courtesy of Glass & Vine
Although more than two centuries have passed since Miami’s oldest neighborhood was founded in the late 1800s and later annexed by the City of Miami in 1925, the eclectic, welcoming, and laid-back atmosphere has hardly disappeared from the lush, tree-lined streets of Coconut Grove. Thanks to its early influx of immigrants hailing from Britain, the Northeast, and the Bahamas, residents visitors can still enjoy traces of the Grove’s unmistakable bohemian roots, in addition to its vibrant and modern flair sparked by changing times.

Coconut Grove also boasts a culinary scene as rich and diverse as its history. The umbrella-shaded corner eatery Cafe offers a scrumptious brunch that lures throngs of people. College-kid-approved Lokal satisfies burger-and-beer-loving diners by serving creative and sustainable menu staples. The family-friendly Ariete doesn’t disappoint with its sophisticated approach to progressive American fare. Plus, restaurants such as Bombay Darbar, Le Bouchon, and Atchana successfully pay homage to the classic cuisine of each eatery's culinary roots.

3540 Main Hwy., Coconut Grove
305-640-5862
arietemiami.com
Much has changed in Coconut Grove’s dining landscape in the past few years — and for the better. Led by Michael Beltran — former of the Cypress Room and Tuyo — and Jason Odio of Sidebar, Ariete brings a touch of natural elegance to the neighborhood via a menu that fuses Beltran’s Cuban roots with new American cuisine. The result: dishes such as foie gras ($26) served with sour orange, temptation caramel, cocoa nibs, and fried plantains, and pork chops ($29) that have been brined, smoked, and lightly charred for optimal taste and texture. From 4 to 7 p.m. Tuesday through Sunday, Ariete’s popular happy hour welcomes guests to nibble options such as and smoked salmon sliders, as well as imbibe cocktail floats and select beer and wine. And as with all things at Ariete, weekend brunch — filled with drool-worthy sweet and savory items — is a hit. 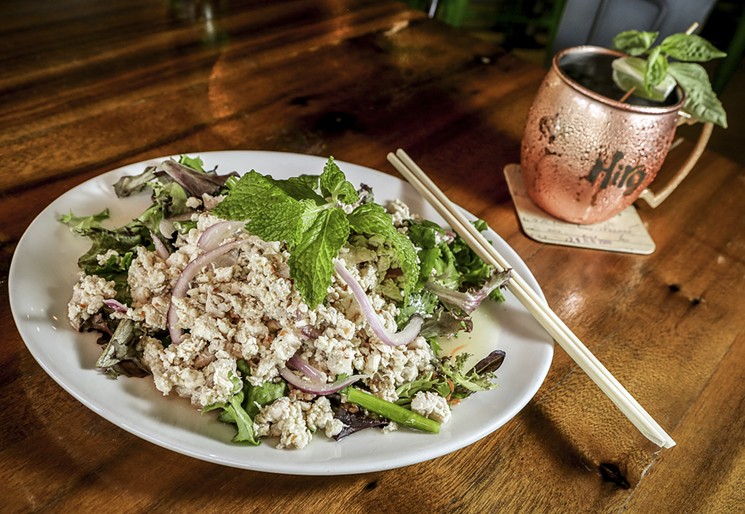 3194 Commodore Plaza, Coconut Grove
305-774-0404
atchanas.com
Thanks to the recent opening of Atchana Capellini’s namesake in Coconut Grove, Southeast Asian-food enthusiasts can now enjoy her honest approach to Thai cooking. Using herbs and spices sourced from local farms, Atchana serves a rich blend of simple and vibrant dishes reminiscent of Capellini's childhood in a welcoming atmosphere. Try the larb ($15), light and flavorful Isan-style minced chicken brightened with lime and fresh herbs. Find a selection of curries, soups, rice, and noodles, but the pad thai ($17) and crispy duck ($35) not to be missed. Pair your meal with craft beer from local microbreweries and you’ll feel right at home. 2901 Florida Ave., Coconut Grove
305-444-7272
bombaydarbar.com
If authenticity and comfort are what you seek in your Indian food, look no further than Bombay Darbar. It offers the diverse flavors of Mumbai as well as other regions of India, showcasing the mastery of aromatic spices through dishes such as tandoori lamb chops ($21.95), chicken tikka masala ($16.95), shrimp malai curry ($17.95), mushroom makhani ($14.95), and other flavorful variations. Most dishes can be ordered mild, low-medium, medium, high-medium, hot, or  depending upon your tolerance for spice. Cool those taste buds with a sweet glass of mango lassi ($3.45), and order gulab jamun ($3.95) — fried milk-powder balls soaked in rose-scented syrup — for dessert. 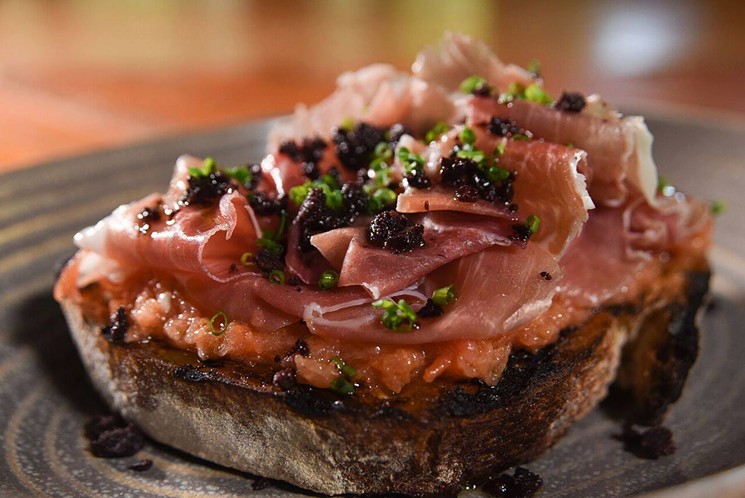 2820 McFarlane Rd., Coconut Grove
305-200-5268
glassandvine.com
To fully experience the energy of the Grove, take a seat on the massive patio at Glass & Vine, a casual garden oasis overlooking Peacock Park and Biscayne Bay in the distance. With lush greenery and kiddie play areas within walking distance, the 200-seat eatery by Chopped champion and Eating House chef Giorgio Rapicavoli has become a dining retreat for those seeking simple, ingredient-driven dishes in the area. The menu, inspired by Florida classics and Latin and European influences, is divided into four sections: Snacks, Garden, Sea, and Land. Whether you’re coming for a light snack of chilled-shrimp tostada ($14), made with slices of Zak the Baker bread, salsa verde, tomatillo, lime, and cilantro; a heartier sharable dish of bison churrasco ($26); or a refreshing craft cocktail before a night out on the town, Glass & Vine fits the bill.

3468 Main Hwy., Coconut Grove
305-444-0244
greenstreetcafe.net
Because is an Olympic sport in Miami, head to , the restaurant that set the standard for what a proper brunch soiree should be. Open until 1 a.m. Sunday through Tuesday and 3 a.m. Wednesday through Saturday, this beloved all-day dining institution serves sweet breakfast dishes such as coconut-crusted French toast ($9) and cinnamon roll pancakes ($9), as well as savory lunch and dinner items including a juicy ($17) and filet mignon ($29). An assortment of healthful leafy greens and a lineup of well-crafted cocktails round out the menu. Pro tip: Sit on the patio for optimal people-watching. 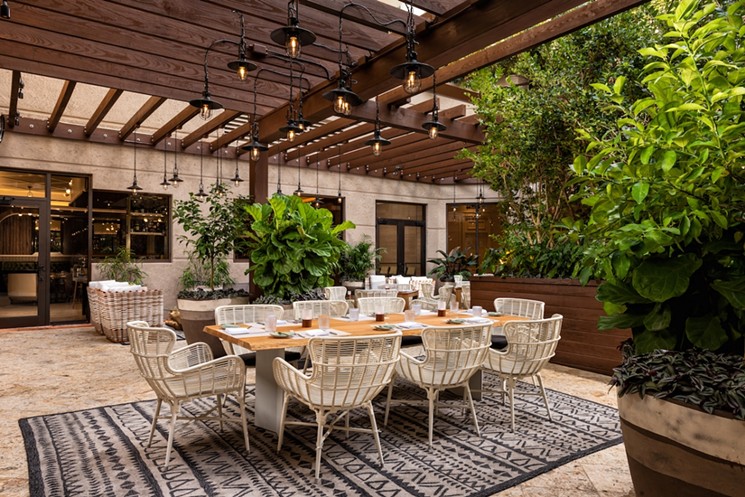 3300 SW 27th Ave., Coconut Grove
305-644-4680
isabellescoconutgrove.com
Walk through the Ritz-Carlton lobby to find Isabelle's Grill Room & Garden, a restaurant named for Isabella Peacock, one of the Grove’s earliest settlers and founder of its first hotel, the Bay View Inn. Chef Abel Veulens' all-day dining menu includes options such as eggs and lentils, made with Calabrian tomato sauce, braised lentils, and grana ($13); and chicken and waffles with jalapeño honey ($24). Main courses include Sunday gravy pizza with meatball, ricotta, tomato sauce, and mozzarella ($19); lobster pappardelle ($29); and Scottish salmon with peas, carrots, sweet corn, and chorizo ($26). The fare pairs well with signature drinks such as the Peacock, made with Absolut Elyx, lavender, lemon, and blood orange purée, to be enjoyed in the charming outdoor garden or across the lobby at the Commodore, the hotel's cocktail lounge.

3430 Main Hwy., Coconut Grove
305-448-6060
.com
Chef/owner Christian Ville honed his skills as the head of the kitchen in restaurants in England and France before making his way to Miami in 1998. His quaint, long-standing café enchants guests during breakfast, lunch, and dinner via signature French delights, seemingly endless wine selections, and a je ne sais quoi that Coconut Grove needs. Never-fail starters include onion soup ($8) topped with Swiss cheese, and escargots en persillade ($12.50), a timeless creation of snails in garlic and parsley-laced butter. Standout entrées include roasted snapper with ratatouille ($26.50), traditional French red wine beef stew ($28.50) made with veal cheeks and served over a nest of fettuccine, and steamed fresh mussels ($20.50) made with white wine and shallots and accompanied by crisp fries.

3190 Commodore Plaza, Coconut Grove
305-442-3377
lokalmiami.com
Perhaps the buzziest dish at Lokal is the burger My Childhood Dream ($15). A four-ounce Florida grass-fed patty, American cheese, and a fried egg sandwiched between two halves of a seared glazed doughnut from the Salty Donut worth the hype. But don’t sleep on other decadent options. The sustainability-conscious gastropub slings comfort-food favorites using locally sourced ingredients, including a burger made from 50 percent Florida ground beef and 50 percent Florida ground bacon ($15); fried Florida chicken and Belgian waffles ($15); local alligator ($13) from Clewiston; and the zestiest key lime pie ($8), made with Florida key limes. Join regulars at this graffiti-covered hot spot with a Funky Buddha Floridian in one hand and your four-legged friend's leash in the other — pooches are welcomed with freshly made doggie treats and a special canine menu. 3111 Grand Ave., Coconut Grove
305-476-8292
saporedimaremiami.com
Italian for "Taste of the Sea," Sapore di Mare is as close to a trip to Italy as you can get in the Grove. The restaurant's specialty is seafood from Campania, a region in southwestern Italy that includes Naples and the Amalfi Coast. Notable dishes are the branzino carpaccio ($20) and Luciana (baby octopus served in a tomato sauce with capers and black olives). The e  is tossed tableside inside a wheel of aged pecorino imported from Rome ($24; black truffles cost an additional $15).

Strada in the Grove

3176 Commodore Plaza, Coconut Grove
305-444-1312
stradainthegrove.com
Between the compelling flavors of traditional Italian cuisine and the warmth of the contemporary space, there’s something uniquely about this gem. Choose from the eatery's high-end collection of more than 100 wines, including boutique labels from every region of the world. Brunch, lunch, and dinner menus are almost as extensive as the wine list, with a series of , appetizers, cured meats, salads, , seafood, and meat dishes to please every kind of Italian food craving. Simple yet complex, the spaghetti ($12.50), made with garlic, red pepper flakes, and aged-anchovy elixir, does not disappoint. Neither does the tiramisu ($7) for dessert.
KEEP MIAMI NEW TIMES FREE... Since we started Miami New Times, it has been defined as the free, independent voice of Miami, and we'd like to keep it that way. With local media under siege, it's more important than ever for us to rally support behind funding our local journalism. You can help by participating in our "I Support" program, allowing us to keep offering readers access to our incisive coverage of local news, food and culture with no paywalls.
Make a one-time donation today for as little as $1.
Juliana Accioly
Contact: Juliana Accioly

Laine Doss is the food and spirits editor for Miami New Times. She has been featured on Cooking Channel's Eat Street and Food Network's Great Food Truck Race. She won an Alternative Weekly award for her feature about what it's like to wait tables.
Contact: Laine Doss
Follow:
Facebook: Laine Doss
Twitter: @lainedoss
Maureen Aimee Mariano is a freelance food writer for Miami New Times. She earned a bachelor of science in journalism from the University of Florida before making her way back to the 305, the city that first fueled her insatiable appetite.
Contact: Maureen Aimee Mariano
Follow:
Facebook: Maureen Aimee Mariano
Twitter: @maureenaimee