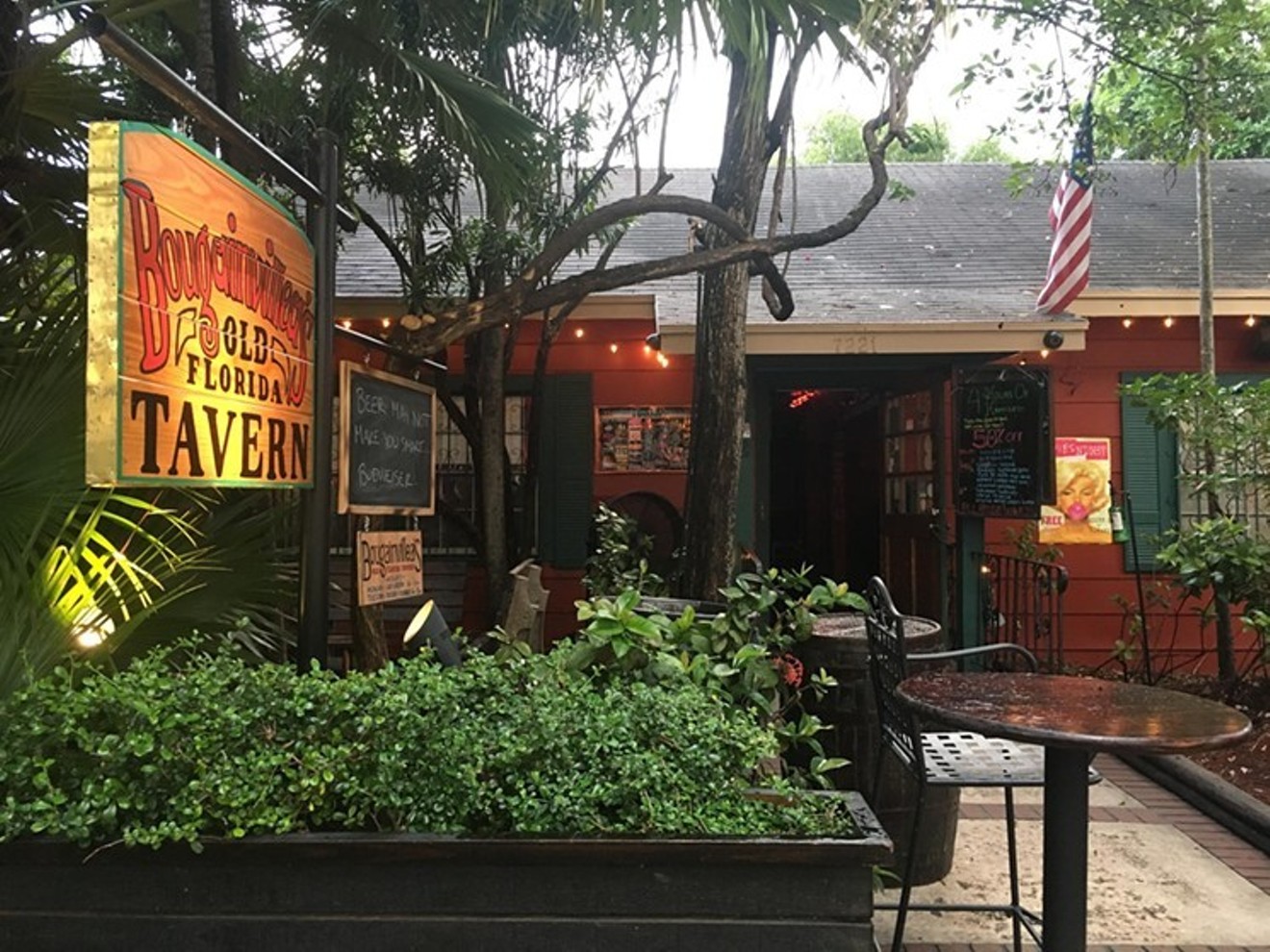 Bougainvillea's Old Florida Tavern — Bougie's, to you. Photo by Jessica Gibbs
Update November 20, 12:30 p.m.: Bougainvillea's Old Florida Tavern seems to no longer in danger of closing. The much-loved South Miami establishment is renegotiating its lease with the property's landlord. In an email to New Times, Alcione Gonzalez, marketing and events director for Bougie's wrote, "Our customers rallying on social media really saved the business. It was pretty magical what they did and we are so grateful for their support. We have begun talks with our landlord on the potential of a long-term lease."

For two decades, Bougainvillea's Old Florida Tavern, AKA Bougie's, has been the place to go for cheap drinks and live music in South Miami.

The bar, housed inside a 1940s cottage, has long been a place where everyone from UM students to trendy condo dwellers can coexist with the shared goal of drinking in a convivial environment.

Now, the cozy, neighborhood hangout is in jeopardy of closing its doors forever.

In an email to New Times, Bougainvillea's marketing and events director, Alcione Gonzalez, said she and the bar's staff were devastated to learn that the bar is in danger of closing. "After 20 years as Bougainvillea’s Old Florida Tavern, we are being forced to shut our doors. There are no words to describe what we feel right now but we will try," Gonzalez wrote.

She attached a letter addressed to Bougie's landlord, Ruby Bacardi, and said Bacardi had "refused to read it and ripped it up and shredded it in front of our faces."  According to Gonzalez, Bacardi is part of the famed spirits dynasty.

Gonzalez shared the letter, which outlined the events that led to the possible closure of the beloved bar, on social media.

According to the letter, Bacardi took over the property in 2009 and seemed to have a good relationship with the bar until March 2020, when drinking establishments were closed during the coronavirus mandatory shutdown. The bar's management said it used the downtime to make repairs to the property, including fixing a plumbing issue, asserting that it spent about $100,000 over the past 12 months.

On November 4, the letter says, the bar received a letter from Bacardi's lawyer, stating they were in default of their lease and in rent arrears from April to November 2020. Upon trying to negotiate, the letter says, "we were told that you just wanted us to vacate the property without any explanation."

The letter notes that, although the bar reopened on October 16, it has been operating at reduced capacity. That, combined with the midnight curfew, has affected sales.

Bougainvillea's lease ends November 30 and, if a new one isn't negotiated, the bar might be forced to close. If it does close, 20 employees will be left without income including, according to the letter, "a countless amount of musicians, DJs, entertainers, and loyal patrons that will feel a major loss by this decision."

Gonzalez declined a request for an interview, referring New Times to the letter to Ruby Bacardi. We reached out to Bacardi and will update this story with additional information. A records search yielded no pending eviction cases against the bar.
KEEP MIAMI NEW TIMES FREE... Since we started Miami New Times, it has been defined as the free, independent voice of Miami, and we'd like to keep it that way. With local media under siege, it's more important than ever for us to rally support behind funding our local journalism. You can help by participating in our "I Support" program, allowing us to keep offering readers access to our incisive coverage of local news, food and culture with no paywalls.
Make a one-time donation today for as little as $1.