"Food halls have been popping up around the nation. One made sense in Fort Lauderdale because the city is growing at light speed, and there's a big movement towards quality foods and away from chains," explains Steven Dapuzzo of Society Eight Hospitality Group, who devised the project.

"Locals are developing a thirst for more specialized cuisines and elevated dining experiences," Dapuzzo tells New Times. "I also believe that food halls are the future, with their different choices for solo diners to enjoy on their own or the option for people to be sociable and congregate."

The project is divided into two former warehouse buildings, the first housing a dozen South Florida food concepts, each with its own culinary focus and look. Navigating the one-story, 24,000-square-feet space is easy. The big challenge may be narrowing down your choices.

Follow the scent of Aussie-style coffee to Bronte Café, open all day along with Chop Shoppe Meat Provisions and the Argentinian concept Empanada Bodega. Lebanese recipes are at the heart of Needa' Pita, while HotLime Craft Tacos and Ceviche (also found at Miami's Politan Row Market) offers its own take on Latin staples from a stationed 1960s Volkswagen camper.

Options go on with a vegan menu at Heavenly Raw, poke bowls and sushi boxes at an outpost of Miami-based concept Poke OG, and ramen and other Asian specialties at Senbaruzu Asian Fusion Tapas. Square pizza slices by the inch are served at Fuoco Roman Pizza, and Nellie's Country Kitchen dishes out a list of Southern items. 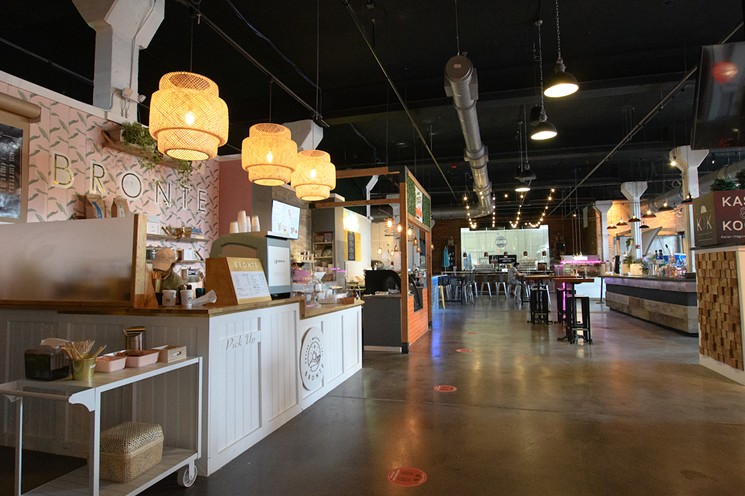 Bronte Café inside the Sistrunk Marketplace.
Photo by Cailin Byrne
Patrons can enjoy savory and sweet items from French-owned OSOM Crepes and fun Asian desserts from Kasai+Koori, including mochi, taiyaki waffle cones, and kakigori made from shaved blocks of ice garnished with flavorings and topping.

Sistrunk Marketplace carries wine, draft beer, and liquor and its full-service Center Bar. Khoffner Brewery has a counter slated to open in the next two months. Also sharing the action is Wired Sound DJ, a production music academy, and a cooperative-style retail area called SistrunKollective.

For now, the market is open Thursday through Sunday and features live music every evening. Cooking classes are planned for the future, along with themed nights, Sunday brunches, Sunday 'In the Biz' family dinners, wine pairings, and movie nights.

According to Dapuzzo, the venue is operating at less than half of its 565-person capacity. Menus are available digitally, enabling guests to order from their phones from within the hall itself. Reservations must be made in advance, and masks and social distancing are required.

"Everyone was ready to open back in March, and we couldn't, so we used the downtime to make it a COVID-19 facility in terms of meeting and exceeding the guidelines," Dapuzzo says. "The facility, for its sheer size and 20-foot ceilings, is almost comforting, but we adopted a reservation system to help with the pacing of people, allowing us time between parties to sanitize so everyone can come in and have the right experience."

Sistrunk Marketplace & Brewery. 115 NW Sixth St., Fort Lauderdale; 954-329-2551; sistrunkmarketplace.com. Thursday 4 to 10:30 p.m., Friday through Sunday 9 a.m. to 10:30 p.m.
KEEP MIAMI NEW TIMES FREE... Since we started Miami New Times, it has been defined as the free, independent voice of Miami, and we'd like to keep it that way. With local media under siege, it's more important than ever for us to rally support behind funding our local journalism. You can help by participating in our "I Support" program, allowing us to keep offering readers access to our incisive coverage of local news, food and culture with no paywalls.
Make a one-time donation today for as little as $1.
Juliana Accioly
Contact: Juliana Accioly