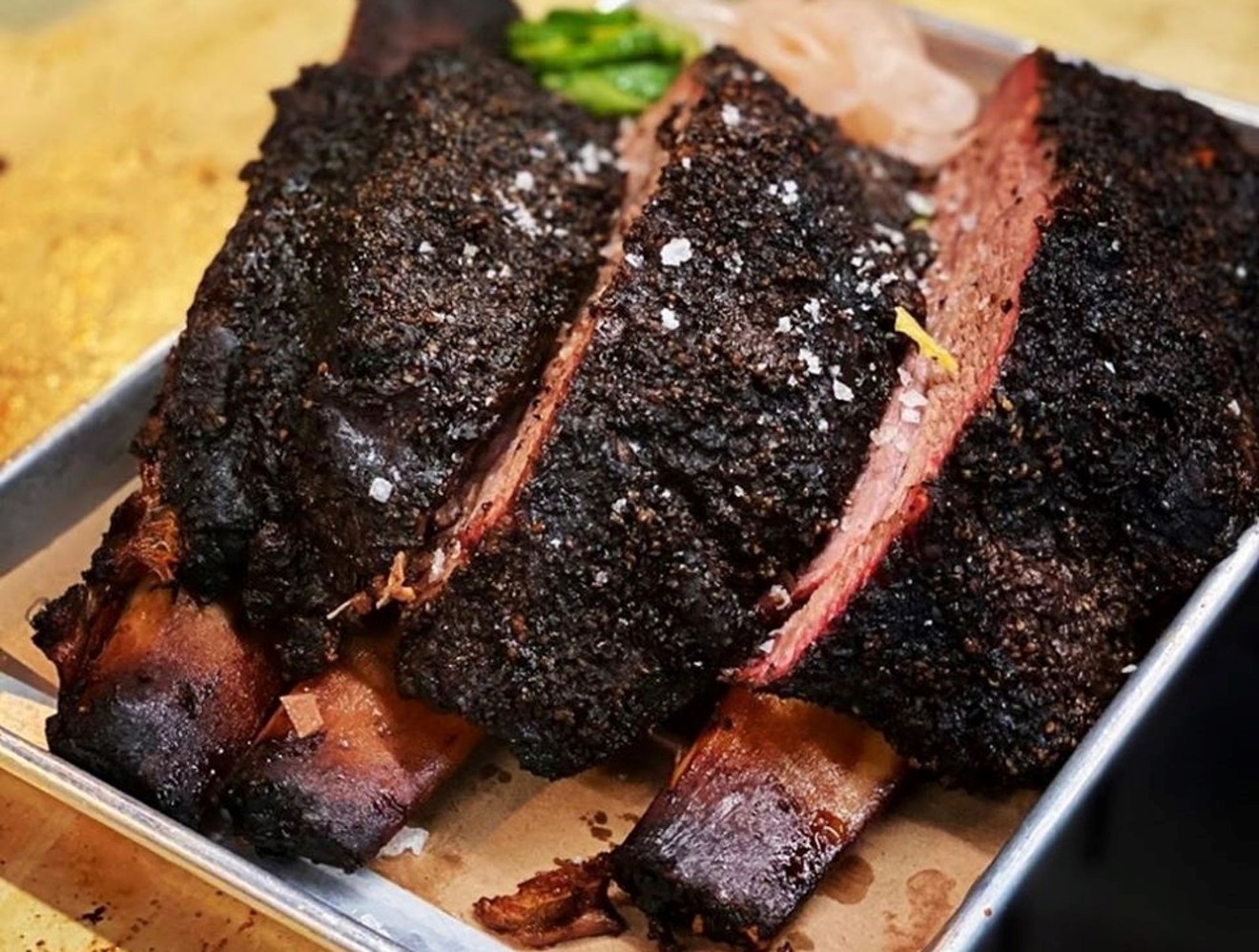 Beef ribs at Society BBQ. Photo by Richard Hales
When Richard Hales opened Sakaya Kitchen in 2009, Midtown wasn't the bustling shopping and residential hub it is today. "Besides Target, I have the longest lease there," the chef and restaurateur tells New Times over the phone.

Hales has gone on to open several other concepts, including Blackbrick (also located in Midtown), the now-shuttered Bird & Bone in Miami Beach, and Society BBQ at the Citadel food hall in Little Haiti.

When COVID-19 forced the restaurant industry to rethink menus and business models, Hales was able to persevere with Society BBQ and Blackbrick. "Even considering the quarantine and lockdown, they're doing very well," Hales says. "Sales are not back to where they would normally be, but we're surviving."

Late last month, when restaurants in Miami-Dade County got the go-ahead to try indoor dining again, he was faced with a choice: Invest in renovating Sakaya Kitchen's dining room and menu, or make a change.

He decided to transition the Sakaya Kitchen space in Midtown into a second Society BBQ.

"Part of my job as a restaurateur is to assess the risk on every dollar we spend. I just felt like I need to go with the sure thing. I can't throw the limited dollars we have away, " Hales explains.

Expected to open as early as next week, Society BBQ Midtown will offer the same menu as the Citadel location, along with some additions, such as the burger and chicken sandwich Hales served at Bird & Bone.

The chef says people are seeking comfort these days and barbecue is the ultimate comfort food.

"At Society, it's ribs, mac and cheese, and cornbread. It's pulled pork and chicken. It's food that sells itself, and that's appealing to me as a restaurateur."

And the chef in Hales has discovered a newfound passion for cooking with fire.

"When I'm at home, I'm cooking with wood and honing my skills," he says. "There's something about leaving behind the electric and gas and using wood-fired grills. I've been toying with wood for six, seven years and you think you're going to control the fire, then it does something else. This is now what I want to master."

Even with all the changes, Hales is not shuttering — or even mothballing — Sakaya Kitchen. The restaurant will operate as a virtual entity. Fans of Sakaya's Brussels sprouts and bao will still be able to order from the full menu online. Food will be prepared in Blackbrick's kitchen.

And there's always the possibility it will return in restaurant form.

"I can spend an hour telling you why opening Society BBQ is a good business decision, but closing Sakaya stung," adds Hales, who had five years of fine-dining experience under his belt when he opened the small eatery. "At the time, Miami was filled with restaurants with million-dollar build-outs that played Ibiza Sunday lounge mixes. I wanted to play rock 'n' roll and serve food that was approachable."

In that respect, Hales comes full circle with Society BBQ.

"In a lot of ways, I think of Society in the same way. I know Texas barbecue isn't new, but it's new to Miami. And it's a nice addition to Midtown. I think it's good for the community to experience something different."

He also sees a financial future in barbecue. He's in Tampa now, looking to purchase a restaurant space that will allow him to open a third Society BBQ that will also serve as a facility from which he can ship orders nationwide.

"Society is very portable," he says. "It's comforting. I think that's important right now. I freeze and ship the meat and people tell me it's the best brisket they've had. You can't do that with Korean fried chicken."

Society BBQ. 3401 N. Miami Ave., Miami; societybbqmiami.com.
KEEP MIAMI NEW TIMES FREE... Since we started Miami New Times, it has been defined as the free, independent voice of Miami, and we'd like to keep it that way. With local media under siege, it's more important than ever for us to rally support behind funding our local journalism. You can help by participating in our "I Support" program, allowing us to keep offering readers access to our incisive coverage of local news, food and culture with no paywalls.
Make a one-time donation today for as little as $1.