For the past three weeks, Miamians have been discovering this for themselves at Galper's newly installed counter at Time Out Market in Miami Beach. Longtime fans have been ordering the pies since early 2021 when Galper was hosting pop-ups prior to launching the food truck he now parks in Edgewater.

Over the past year, Galper has steadily grown his business, the key to his success being, quite simply, demand. On June 26, he took a moment to share that sentiment with his staff via email.

"Tonight was a special night," he wrote. "Tonight was a much-needed reminder of why and how PizzElla is where it is since its birth in March of 2021."

Just before seven o'clock on that summer evening, Galper had received an online order for a dozen pies from a customer who'd bought ten the night before.

"Even as Galper was toiling to fill the formidable request, someone called to order by phone. It threw him for a second — he doesn't take phone orders — but he happily obliged. When the customer arrived, he recognized her as a regular customer at the truck's previous location.

"She said she'd been calling and trying to find us for weeks and almost gave up," the pizzaiolo shares with New Times. "She didn't want to eat pizza anywhere else. She always gets a margherita and likes light garlic oil."

Chef Larry Galper has augmented his pizza pop-up with a coveted spot at Time Out Market.
Photo courtesy of PizzElla
"You know how many pizza places there are between Edgewater and Kendall?" Galper asks. "I'm willing to bet it's around 40 or 50, but they said they loved our pizza from having it at Smorgasburg [in Wynwood], and since then at Time Out. They could taste the love. It's not just the taste of the pizza that brings them all back. Good food isn't enough. In fact, I would argue it's just the minimum."

In 2021, Galper began selling pies from a tent outside Imperial Moto Cafe in Little River. A series of similar events took him across Miami to places like J. Wakefield and Panther Coffee, where he was discovered by Time Out contributor Eric Barton, who deemed his pies among the "best pizzas in Miami."

In need of more space, the chef bought a 20-foot FedEx truck and made regular stops in Midtown, at Smorgasburg, and its current location behind Mimi's in Edgewater, where locals get discounts and, on Wednesdays, cash in on his buy-one-get-one deal.

When the opportunity arose to take over the built-in Neapolitan oven at Time Out Market Miami, Galper didn't hesitate to scale up.

The self-made restaurateur will tell you PizzElla — named after his mother, whom everyone calls "Ella" — is an extension of his love for food.

"My mother was an amazing cook, and I grew up loving food — the process of making it, serving it, and the instant gratification of someone loving what you made for them," explains Galper, who relocated from Los Angeles to Miami in 2020, leaving behind a career as a Hollywood agent. "It took me to age 35 to realize that."

Now, armed with experience from a fast-track culinary program in 2018 followed by work in a number of California kitchens, Galper is doing what he believes he was born to do: make pizza.

And not just any pizza. His is a Neapolitan style that walks the line between the thin-crust New York slices he grew up on and the dense, flavorful Italian pies he fell in love with.

"What I aim for is something that falls in between. If those two pizzas got married and had a child — that's what I'm looking for," Galper says. 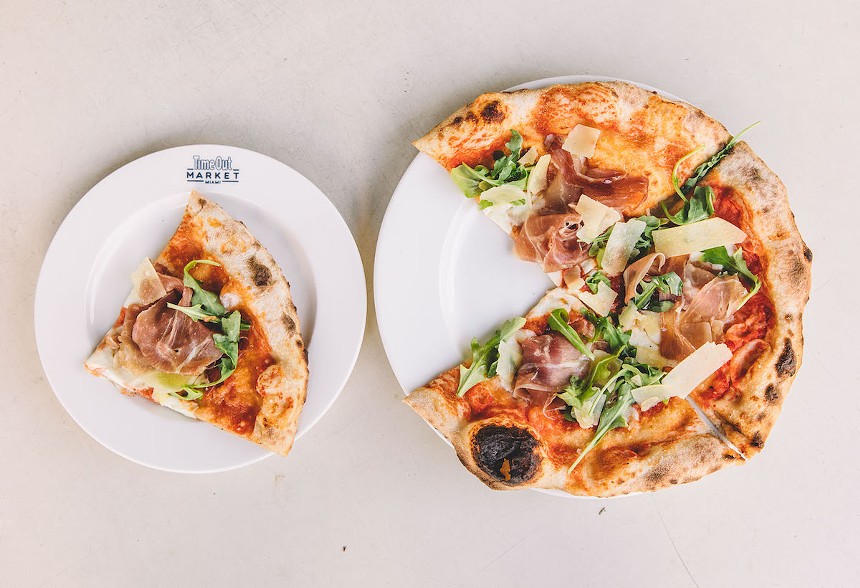 The new prosciutto and arugula pie from PizzElla is available at Time Out Market.
Photo by Sharron Lou/@shotbysharron
While his surroundings have changed, Galper's dedication to the pizza has remained constant. It begins with the dough: a traditional Neapolitan mixture of flour, salt, water, and yeast. After recording early batches in a journal, he arrived at the perfect alchemy of temperature, hydration, and ingredients to create a dough that's crisp at the center, dense and chewy around the edges.

"It's perfect for two people to share, while it's light enough for one to down," he notes.

At both Time Out Market and the food truck, the menu continues to offer PizzElla's three top sellers: a traditional Margherita, a sauce-free cacio e pepe, and his marinara-based pepperoni and hot honey.

Customers can also get creative with a "Modify Yo Pie" option, which lets you choose from the week's ingredients along with staple toppings that include house-made pickled shishito peppers and a pork and turkey sausage seasoned with thyme, oregano, rosemary, and Italian parsley.

For his sauce, Galper uses only San Marzano tomatoes imported from Italy. It's a proprietary process flavored with basil, salt, and garlic, presenting as a rich base that plays well with the ingredients that top it without overshadowing it.

The most popular pie continues to be the cacio e pepe, one Galper says was inspired by LA-based Pizzana's Daniele Uditi. In lieu of sauce, you'll find the holy trinity of Italian cheeses — a thick blanket of Parmesan, pecorino, and medallions of mozzarella that emerge from the oven bubbling and oozing. It's topped with the house garlic oil and a second layer of Parmesan and pecorino and returned to the fire before receiving a piping of cacio crema spiked with a generous hit of fresh black pepper. (Like frosting on a cake, he uses it to spell "PIZZELLA" on each cacio e pepe pie, though he's open to special requests.)

Whatever you order, when you bite into one of Galper's pies, you'll certainly taste and feel the love.

"We're living in a weird time," he says. "It seems like these days, at every turn, the world is taking every shot to make life harder on most people. In our line of work, we have these little opportunities to do something so small that could turn someone's bad day into a great day."

PizzElla at Time Out Market. 1601 Drexel Ave., Miami Beach; eatatpizzella.com. Sunday through Thursday 11 a.m to 10 p.m., Friday and Saturday 11 a.m. to 11 p.m.
KEEP MIAMI NEW TIMES FREE... Since we started Miami New Times, it has been defined as the free, independent voice of Miami, and we'd like to keep it that way. With local media under siege, it's more important than ever for us to rally support behind funding our local journalism. You can help by participating in our "I Support" program, allowing us to keep offering readers access to our incisive coverage of local news, food and culture with no paywalls.
Make a one-time donation today for as little as $1.