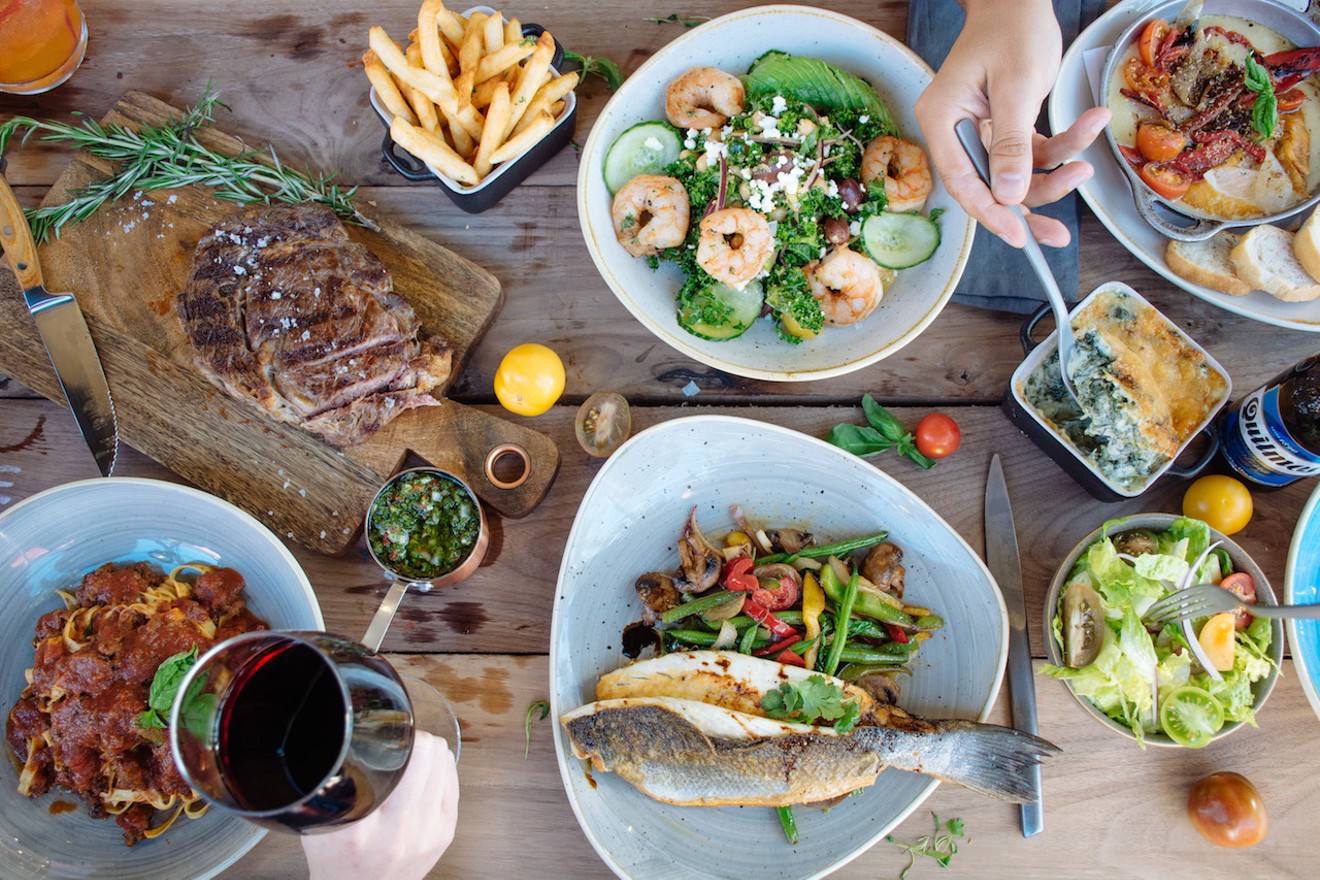 Argentine feast at Novecento. Photo by Valeria Martens
A blend of Mediterranean and indigenous cooking, Argentina's most famous contribution to the world is beef, and its staunch native carnivores are known to require a variety of succulent, savory cuts grilled over an open flame in order to consider a meal true and full.

From classic parrillas to authentic bodegones, Argentine restaurants make up a considerable slice of the Magic City's increasingly diverse food scene. Along with traditional dishes such as milanesa, churrasco, and provoleta, pastas pay homage to the Italian ancestry of many Argentines. In addition, many restaurants have also accommodated the local demand for seafood, gluten-free, and vegan options.

For a mix of experiences, check out these Argentine restaurants in Miami. 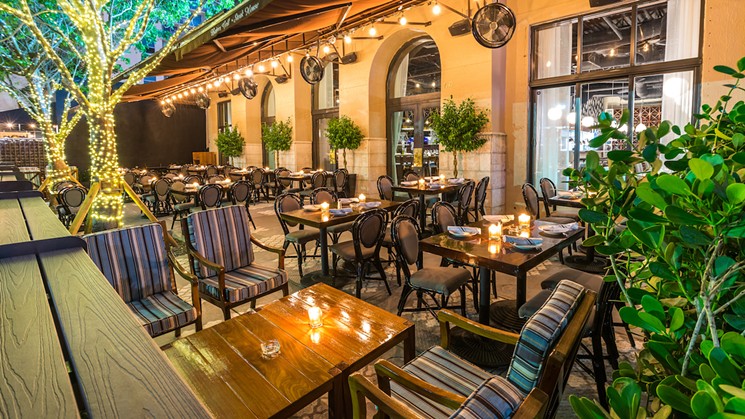 Various locations
bairesgrill.com
The ideal Argentine meal is as much about ambiance as it is food. For more than 20 years, Baires Grill has consistently offered solid dishes, friendly service, and reasonable prices. Argentine waiters who know the menu inside and out will suggest you start with an order of the spiced blood sausage morcilla ($4.50) or tablita Baires, with crisp sweetbreads, sausages, and a choice of empanada ($21). From the grill, choose from options such as entraña (skirt steak), vacío (flap steak), and parrillada to share ($68). Lighter fare includes a signature steak salad with caramelized onion, tomato wedges, and avocado ($17), and a glazed salmon and quinoa bowl with broccoli, spinach, and roasted sweet potatoes with miso and sesame dressing ($16). Enjoy any of these dishes with a glass of one of the many Malbecs. 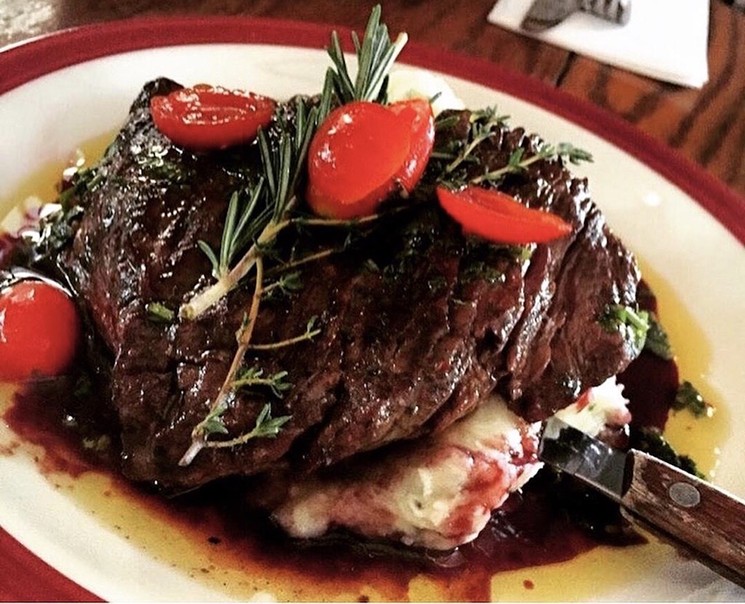 5555 NE Second Ave., Miami
305-754-2899
fioritomiami.com
The Alvarez brothers have been running this rustic bodegón in Little Haiti since 2012, when locals began streaming in to soak up Argentine culture in Fiorito's laid-back setting over big portions of comfort food and televised soccer matches. Named for Villa Fiorito, a slum south of Buenos Aires where soccer legend Maradona grew up, the restaurant transports guests to la Argentina via a homey, no-frills menu of dishes such as butternut squash soup with homemade chili and diced provolone ($7), golden and crisp sweetbreads ($12), and provoleta con chorizo ($13). The well-priced list continues with entrées such as vegetable parrilla with blue cheese and tomato chimichurri ($13), ricotta and spinach crepes ($17), and New York strip with grilled tomato and eggplant ($25). For dessert, dulce de leche pancakes ($9) or flan ($8) are the biggest hits. 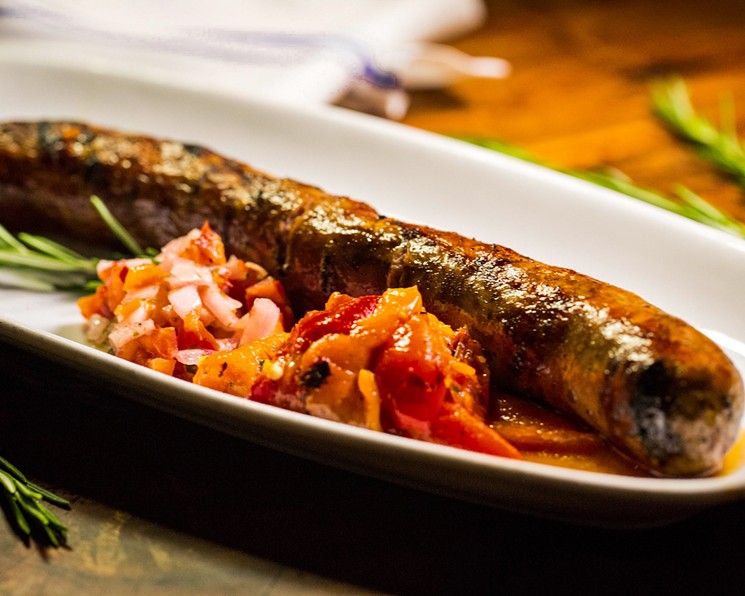 Various locations
grazianosgroup.com
In 1989, Mario Graziano and his wife Maria went from running a butcher shop in Buenos Aires to opening a market on Coral Way. Three generations on, the family's multiple restaurants and mercados are some of the best local Argentine spots to experience what parrilla is all about. Locals pack the markets to order from an affordable menu of pasta, panini, steaks, and more than 20 varieties of empanadas as well as purchase Malbec and other wines by the bottle. At the restaurants, some of the most popular dishes are beef rib-eye carpaccio with Worcestershire mayo ($18), wild-caught Madagascar giant prawns ($15 each), and sausages of spicy wild boar, lamb, and pheasant flambéed with cognac ($19). Standout entrées are Patagonian lamb ($39), short ribs slowly grilled for three hours over quebracho wood ($42), hand-cut tenderloin in a Malbec reduction with mushrooms ($39), and bucatini cacio e pepe ($19). Save room for torta balcarce, a traditional Argentine cake, with merengue, peaches, and coconut shavings ($12); or dulce de leche panna cotta ($11). 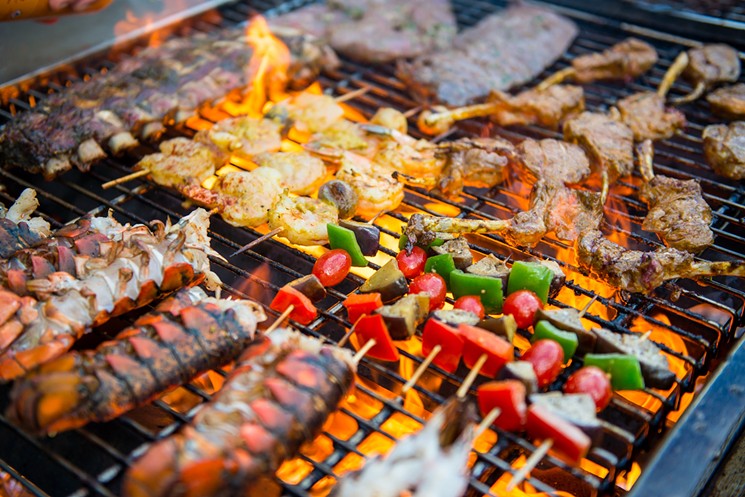 The grill at Leynia.
Sbe Hotels

1685 Collins Ave., Miami Beach
305-674-5752
sbe.com
Hotel restaurants can be stuffy and impersonal, but the warm service and scent of meat sizzling on the outdoor plancha at Leynia inside the Delano will transport you to a family cookout in the middle of the Pampas. Covered patio seating overlooks the hotel's picture-perfect garden, where the grillmaster sprinkles meats with salt before they are brought to your table still hot from the flames. Dishes are served family-style, and favorites include grilled octopus with harissa aioli and smoked paprika ($24), Patagonian lamb with salsa griega ($32), churrasco ($24), and rib-eye with chimichurri ($42). Chef Jose Icardi hails from Buenos Aires, but his food also draws on influences from his travels to Japan, so you can go beyond meat via options such as sea bass with miso marinade and green grapes ($32), tuna pizza ($26), and melted provolone cheese with pickled baby pear ($24). Standout desserts are lemon and champagne sorbet ($16) and chocotorta, made with a chocolate cookie, honey cream, and house-made dulce de leche ($13). 7001 Biscayne Blvd, Miami
305-456-3218
lodelea.com
As in Argentina, la cena begins late at this convivial Argentine eatery on the Upper Eastside. If you're looking for atmosphere, don't show up before 9 p.m. Whether you opt for the indoor dining room or the outdoor garden, owner Leandro De Vita will offer you a stream of grilled choices such as tabla Lo de Lea, with grilled sweetbreads, sausage, blood sausage, empanada, red peppers and grilled onion ($19); entraña with mashed potatoes and escarole ($24); and grilled pork chops with apple chutney served with potato mash and wilted spinach ($22). If you're craving pasta, try orecchiette with broccoli rabe, chili, Argentine sausage, garlic, and olive oil ($21). Finish with dulce de leche ice cream covered in chocolate sauce ($9). 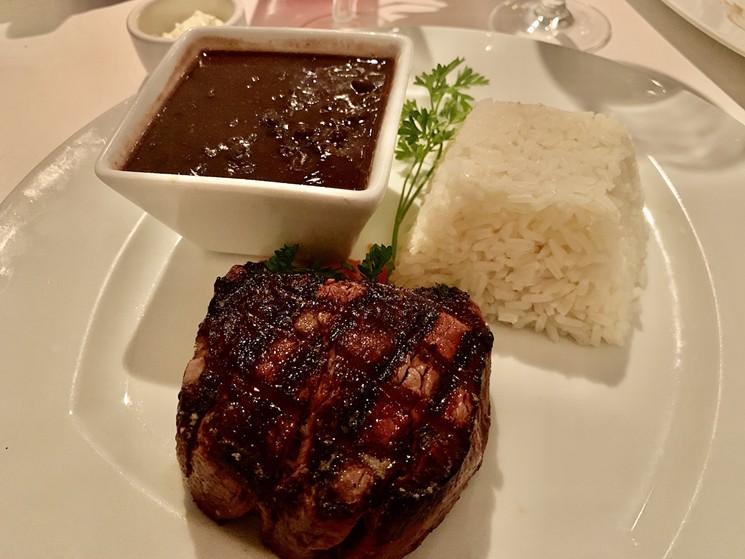 5555 Collins Ave., Miami Beach
305-397-8848
lolarestaurantgrill.com
Dishes made with curry and other global flavors might catch you off-guard at Lola, but the menu at this Mid-Beach spot offers quintessential Argentine fare by a chef who also embraces the country's more modern cuisine. The dining room, located on the second floor, has been tastefully decorated in white and red, and the vibe is both romantic and cool. The menu of Argentine comfort food ranges from mussels Provençal with garlic, parsley, and creamy white wine sauce ($14) to fresh pasta such as cannelloni stuffed with ricotta cheese, braised chicken, Virginia ham, and Parmesan cream sauce ($21). From the grill come chicken marinated in chimichurri ($19), flap steak ($24), and filet mignon ($39), with a choice of sides such as rice and beans, creamy spinach gratin, and mashed potatoes. 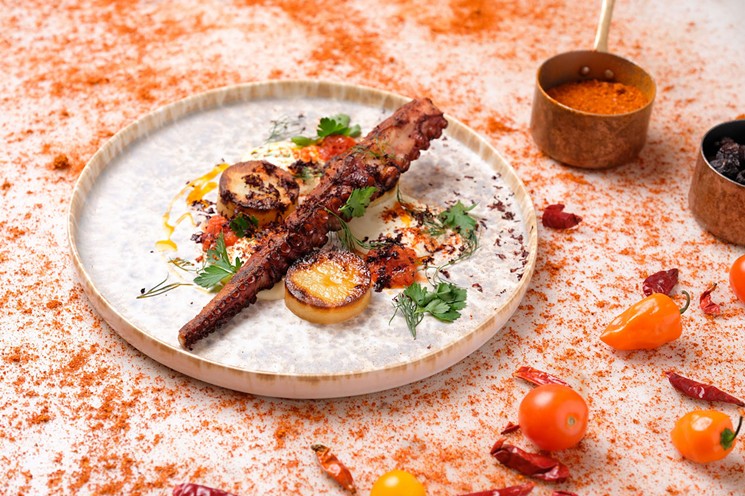 3201 Collins Ave., Miami Beach
786-655-5600
faena.com
Fire is an integral part of Argentines' identity, and their many ways of cooking with wood are elevated at Francis Mallmann's restaurant inside the Faena Hotel. With lush furnishings and cinematic ambiance, Los Fuegos is one of the most photogenic establishments in town, but it's the food that earns its high ratings. Opt for the alfresco dining experience, and will get a VIP seat to the action in the fire kitchen, equipped with a custom-built oven. You could make a meal of the plump empanadas filled with hand-cut prime filet or pecorino cheese and caramelized onions ($8), or the flavor-packed wood-fired artichoke with sesame yogurt ($18) and lush Wagyu carpaccio roll with red endives, green apple, and Parmesan and anchovy aioli ($20). But you will also want to sample options from the grill, such as crisp pork belly with sweet potato ($35), Mallmann's beef tenderloin Milanese with a poached egg ($42). Large plates to share include a seafood parrillada with branzino, prawns, snapper, and octopus, as well as a meat option with skirt steak, rib-eye, chorizo, morcilla, and sweetbread ($130 each). A long list of wines poured by a first-class sommelier complements the offerings. 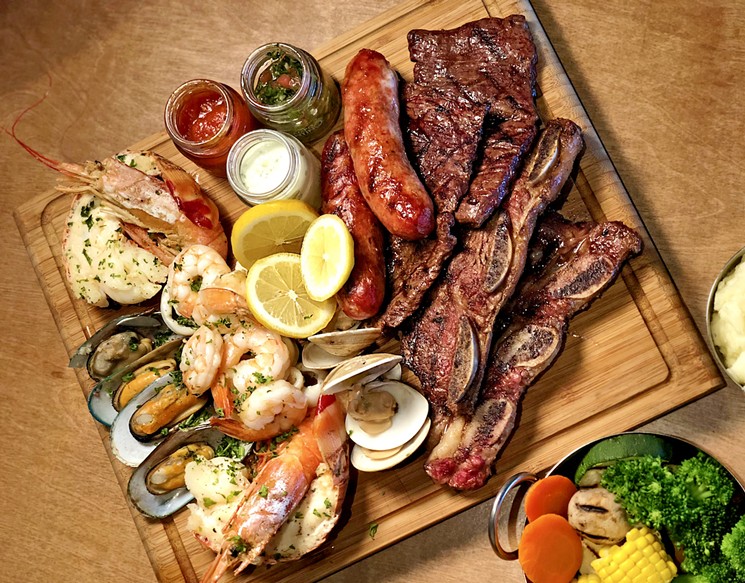 6954 Collins Ave., Miami Beach
305-864-3669
newcampoargentino.com
The family-owned New Campo Argentino in North Beach for the past decade has been a neighborhood favorite for Argentine meals. Head chef and owner Gabriel Ottai channels his Italian background to create plates such as homemade lasagna with meat sauce and mushroom-pink sauce ($21.90), gnocchi filet mignon with fresh tomato ($21.90), and the signature milapizza, with tomato sauce, mozzarella, and ham topped with four fried eggs ($38.90). Carnivores will want to try grilled short ribs ($26.90), parrillada for two ($64.90), or lomo with mushroom sauce ($41.90), served with garlic-and-parsley papas Provençal. End your meal with the signature flan casero with cream and dulce de leche ($6.90).

Various Locations
novecento.com
Locals have been packing Novecento for the past 15 years for breakfast, lunch, and dinner. Meals always feel unhurried, whether during midafternoon business meetings or televised soccer matches, when the restaurants fill with a rainbow of fútbol jerseys. Food options abound. For starters, order the sharable picada criolla, offering natural chicken, chorizo, skirt steak, and empanadas of your choice ($29), or chargrilled octopus with whipped potatoes and smoked paprika ($19). Main-course highlights are risotto di carne with filet mignon ($24) and ravioli filled with mushroom, ricotta, and creamy truffle sauce ($22). Dishes from the parrilla include branzino ($34) and slow-cooked short rib ($36). In addition to offering an extensive wine list, Novecento pours the pungent herbal brew mate — in traditional and boozy versions — from a cart and serves cocktails such as the Sweet Surrender, made with rum, biscotti, and dulce de leche ($13). During the daily happy hour, enjoy bites priced from $5 to $7 and drinks from $5 to $8. 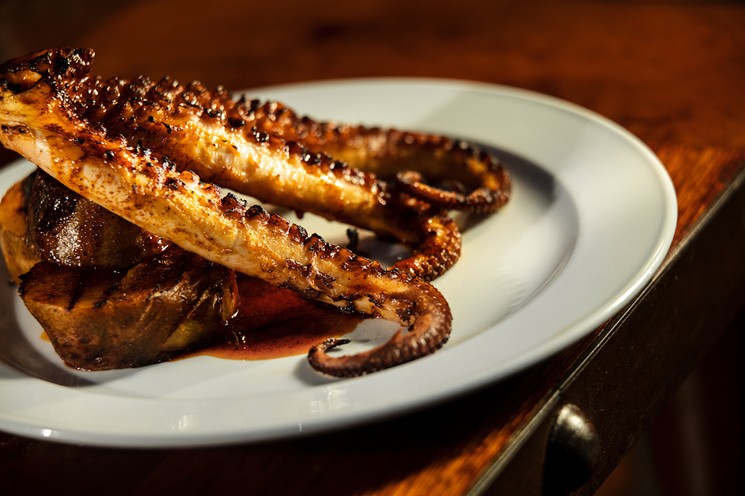 1453 S Miami Ave., Miami
305-200-5606
pmrestaurantes.com
Named for Puerto Madero, a metropolitan waterfront neighborhood in Argentina, this 200-seater in Brickell serves topnotch steakhouse fare. The space comprises two dining rooms, but the inside bar, where chef Javier Carballo works the grill, offers the best seats in the house. The restaurant marries recipes and techniques from across the South American country and continent, so expect dishes such as ceviche ($20); tuna, octopus, or veal carpaccio ($20); and pastas such as fettuccine Bolognese ($20) and crab tortellini ($28). For mains, find skirt steak ($32), rib steak ($48), Wagyu tenderloin ($69), and a prime burger served with steam-puffed souffléed potatoes puffed, a house specialty. Baked crepes come filled with cottage cheese and covered with berry coulis ($10), and pecans top the alfajor, a crisp puff pastry layered with caramel ($9). PM Buenos Aires Fish & Steak House hosts a daily happy hour offering cocktails and wines from Mendoza, Salta, and Patagonia.
KEEP MIAMI NEW TIMES FREE... Since we started Miami New Times, it has been defined as the free, independent voice of Miami, and we'd like to keep it that way. With local media under siege, it's more important than ever for us to rally support behind funding our local journalism. You can help by participating in our "I Support" program, allowing us to keep offering readers access to our incisive coverage of local news, food and culture with no paywalls.
Make a one-time donation today for as little as $1.
Juliana Accioly
Contact: Juliana Accioly