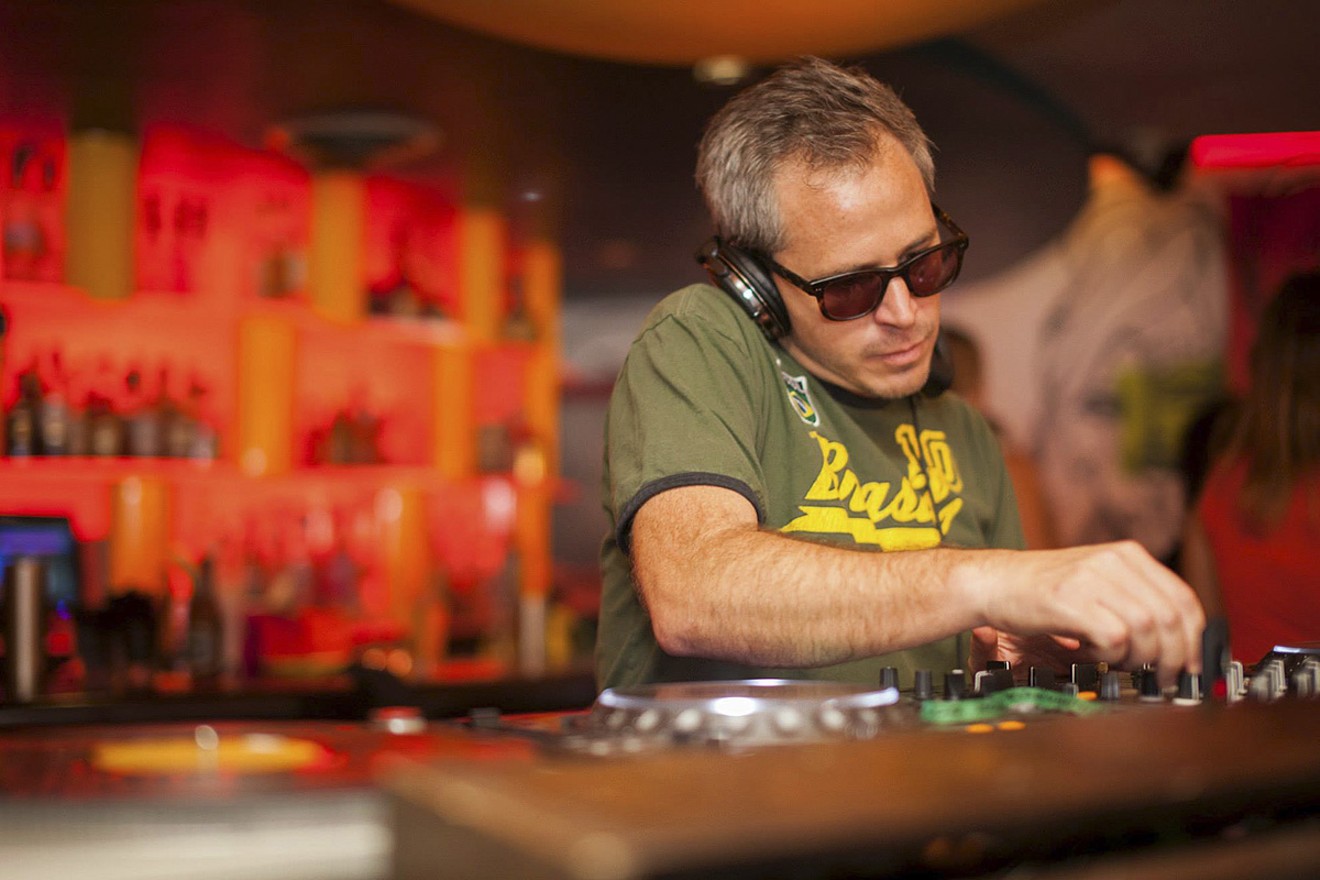 If you're walking through Wynwood and see a tangle of neon lights suspended over a small bar while Stevie Wonder's "Superstition" blares overhead, go on in. You're at Alter.

You can chill out to some Talking Heads and Doobie Brothers while you dine on Australian winter black truffles. Be prepared to kick it up a notch, because by the time your rock shrimp risotto arrives, James Brown will be feeling good, and the music will be growing louder and funkier.

After dinner, you might find your way to Alter's terrace bar, where you'll groove to '90s hip-hop (think Notorious B.I.G. and Jamiroquai). Before you know it, you'll be ordering a second round of (expensive) drinks.

Sound fun and spontaneous? Maybe. But an evening like this doesn't happen by accident. According to a recent report by the Association for Psychological Science, many restaurants skillfully calibrate music to maximize the time customers spend there, equating to a larger check at the evening's end.

The study shows that music's intensity, repetition, variation, beginning, and ending all contribute to "remembered pleasure." Aligning the right style or genre with a particular dining experience is likelier to be pleasing and generate return business than good food alone, the study shows. Though dinner and drinks last only a few hours, people remember the emotions connected to the experience much longer.

"It's not only about food on a plate anymore," says Brad Kilgore, owner and head chef of Alter. "It's the entire environment, and music adds another element to the experience."

In Miami, a city with seemingly endless places to eat and drink, not understanding how music influences sales can spell doom for restaurants. "You have to know how to pivot music based on the crowd," Mel Gonulkirmaz of MelG Group Hospitality says of the influence of music on diners. "If the music sucks, they'll leave and go next door." For more than 15 years, Gonulkirmaz has consulted on restaurants, bars, and nightclubs, including Suviche Wynwood and Lombardi's at Bayside Marketplace.

But some eateries adopt a different strategy. "We always play the same type of music that is conceptual to SushiSamba Miami Beach," the restaurant's general manager, James Recio, says. "Other venues play to the guest."

SushiSamba is decked out in vibrant stained-glass lighting and plays cutting-edge Brazilian music with rock, hip-hop, funk, and jazz beats. Recio says the consistency of the food and music keeps customers returning. He cites as evidence the restaurant's 16 years of success on a high-turnover stretch of Lincoln Road. "When you find that spot where you had a great time, you want to do it again," Recio says. "It's like a drug."

"A lot of places are trying to turn into clubs at night. Many restaurants fail that way."

At Blackbrick in Midtown, owner Richard Hales takes a similar approach to music. "When I opened my first restaurant in 2009, it was focused more on food, but now it's the entire experience," he says. The ambiance at Blackbrick is unexpected for a Chinese restaurant. Red lights illuminate graffiti-covered walls while French rap music drowns out the din of the packed house. "All the beats and the drops are like hip-hop, but it's a French guy rapping," Hales says of his restaurant's signature sound. He mixes it up with funk, Spanish jazz, and a little Michael Jackson and Lauren Hill in for flavor.

Hales pays close attention to the music's beats per minute, or bpm, which is representative of the music's tempo. Too fast can be distracting, and too slow can be boring. "I love Rage Against the Machine, and I just blast it in my office while I'm working," he says. "But in the dining room, when the guitarist is just ripping, it's disruptive."

On a recent evening, Blackbrick is one of few places in the neighborhood that's jumping. "Part of the reason I come here is that I love the vibe of the place," says 23-year-old Miamian Javonica , sipping a martini at the bar with a friend. "I feel comfortable, and I find it relaxing."

The vibe is very different a few blocks away at Sugarcane, where Latin fusion pulsates so loudly it can be heard a block away. The patio is less than half full, and customers are struggling to converse. Patrons shout and walk around their tables to hear one another.

"I didn't like it," 36-year-old Khadine Schultz of Miami says on her way out. "It's loud and not my style." A few moments later, 32-year-old Hector Escobar, vacationing from Puerto Rico, emerges. He liked the music. "I come from an island, and I feel at home here," he says. "It's tropical and nice."

At nearby Riviera Focacceria Italiana, old-school Italian crooners such as Gino Paoli and Luigi Tenco share the spotlight with the traditional fare. "The music feels like I'm inside a Sophia Loren movie," says 36-year-old Miamian Emily Bench, who dines there weekly with her husband. "I have no idea what they're saying, but it's romantic. You can just feel it."

Paolo Albertoni has been the general manager at Riviera Focacceria since it opened almost five years ago. He's attuned to the emotional power of a good song. "People like music that invokes times when you were younger, richer, happier, in love, or in a better place," Albertoni says.

He's committed to the restaurant's Italian theme and doesn't want to make what he considers a common mistake. "In Miami, a lot of places are trying to turn into clubs at night. Many restaurants fail that way."

He loves when people ask for the playlist, but he says the most important thing will always be the food. "This is a restaurant, and it needs to stay a restaurant," Albertoni says. "The party is never the friend of the chef."

Back at Alter, Brad Kilgore rarely uses the same playlist twice. "It's a nonstop evolution, much like our menu," says Kilgore, who designs the music to match the progression of the meal — light fare and softer music to begin the evening, followed by entrées paired with more intense jams.

Planning a playlist that precise might seem arduous, but it's worth it if it keeps customers coming back. Kilgore says he'll continue serving his special concoction of hip-hop and rock 'n' roll. And sometimes, it will be loud. "People in Miami truly expect loud music when they're hanging out having a drink," he says. "You can see it happening around the neighborhood. Loud music — that's where people want to be."