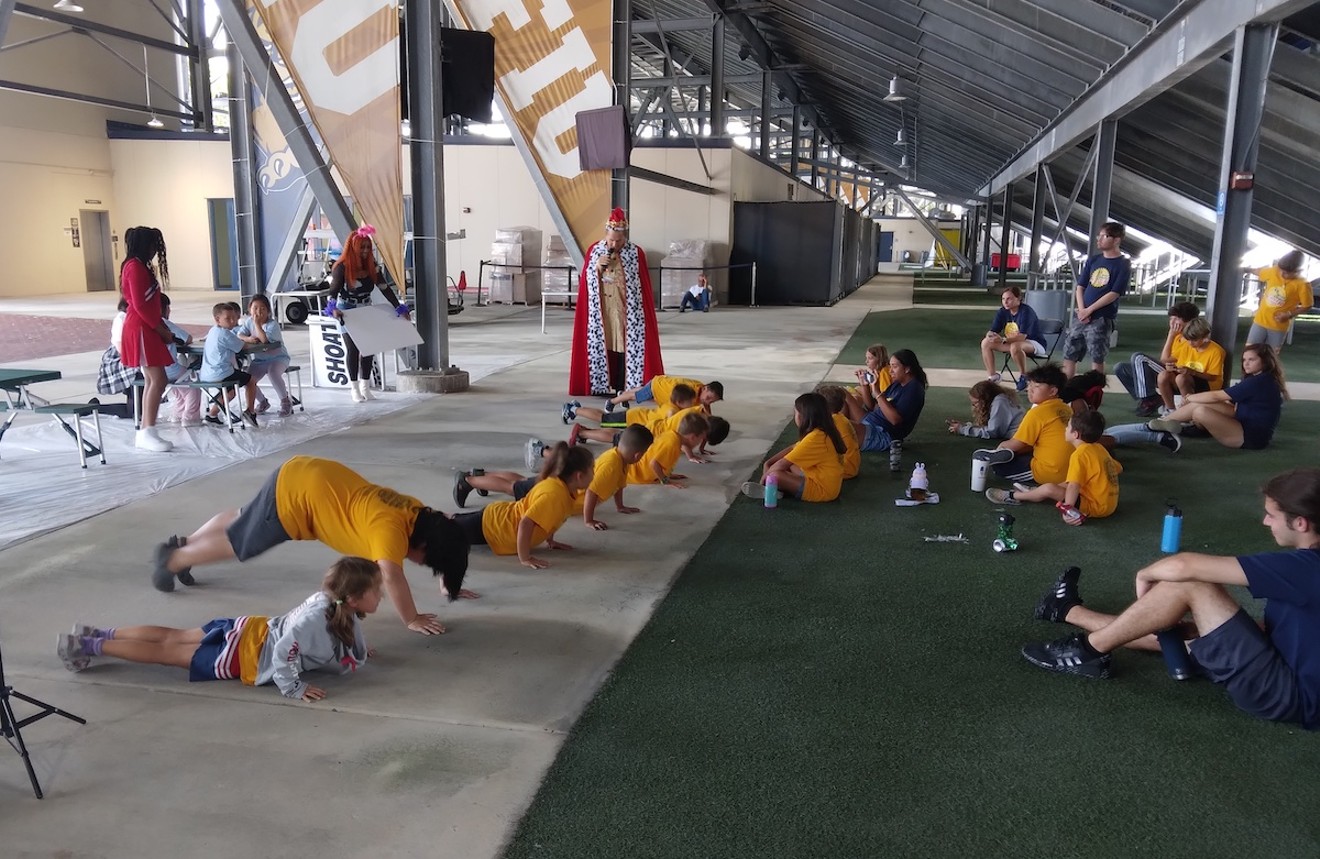 The Pig Club recently filmed at the FIU campus. Photo by Glen Lambert
The next time you reach for some fattening food, play "Quit Putting Fat in My Heart," and you might think twice.

If you haven't heard the song, don't worry — it's not on mainstream radio just yet. But picture this: A young man dressed in a T-shirt that reads "Pig Club" takes the stage on a set made to look like a barnyard. Music to a '90s Backstreet Boys ballad begins, and you're expecting to hear him belt out the familiar lyrics, but instead, he follows the rhythm with new words written for an educational children's television show that preaches healthy eating.

"In my heart, I feel/I would like another meal/But in my mind, I know/That this meal is too fattening," he sings to the beat of "Quit Playing Games With My Heart."

The song is just a snippet of extra footage you can find on YouTube from a Florida-based children's educational television program called The Pig Club, a show created to help kids make healthier eating choices.

The Pig Club is the brainchild of Weston resident Michael Marine, who tells New Times he noticed the dearth of quality educational television programming for children and decided to create something to fill the void.
Marine, who combined his love of acting with his master's degree in public health from Tulane to create the show, said he was inspired by his time in junior high school, where he first created the club by launching a satyrical newspaper he dubbed the Daily Grunt.

"Think of it as a throwback to children's programming of the past. The idea is to fill the gap left by kids' TV icons like Fred Rogers and Captain Kangaroo," said Marine.

To date, Marine has filmed the show at the Tamarac Theatre of Performing Arts and the Riccardo Silva Stadium in Miami. The most recent taping, filmed in partnership with Wise Choice Summer Camp, is expected to post on The Pig Club website in the coming weeks.

During each show, audience members are chosen as contestants to participate in pig trivia, dispelling common misconceptions about swine. From there, kids participate in a series of competitions, including a pie eating contest (fresh fruit topped with low-fat, low-sugar whipped cream) and mudslinging (using low-fat chocolate pudding).

They also learn to do a pig salute — placing a thumb to the tip of their nose and pushing up, so they more closely resemble pig snouts, then issuing three snorts. And, at the end of the show, everyone is invited on stage to do pushups and jumping jacks.

The winner gets to call themselves "Pig of the Week" — a nod to the 1950s television show Queen For A Day.

While it might sound counterintuitive to have children compete in eating contests, throw pudding at each other, and make pig noses, Marine says it's part of the overall message to show kids the ways they can make healthier, more informed decisions.

"The idea is to show them it's OK to pig out on healthy foods like fruits and vegetables," Marine said. "It's also my hope to show kids how to make better choices and dispel stereotypes. For example, pigs are denigrated in our society, but they are actually one of the smartest, cleanest animals."

Marine first filmed the show as a pilot featuring his three children in 2011 but decided to give The Pig Club a reboot after the pandemic, filming episodes at several South Florida locations over the past year. With each filming, the Pig Club covers themes Marine says are even more valuable today than they were a decade ago.

"We have more knowledge about what's healthy, but no one is making better choices," said Marine. "Combine that with the lack of physical education and uptick in fast food consumption, and it's a recipe for childhood obesity."

"My goal is to get it going again at schools and summer camps," sums up Marine. "And, maybe down the road, take it to the next level. If there's enough momentum, I'd love to see the show reach a national audience. We need it now more than ever."
KEEP MIAMI NEW TIMES FREE... Since we started Miami New Times, it has been defined as the free, independent voice of Miami, and we'd like to keep it that way. With local media under siege, it's more important than ever for us to rally support behind funding our local journalism. You can help by participating in our "I Support" program, allowing us to keep offering readers access to our incisive coverage of local news, food and culture with no paywalls.
Make a one-time donation today for as little as $1.