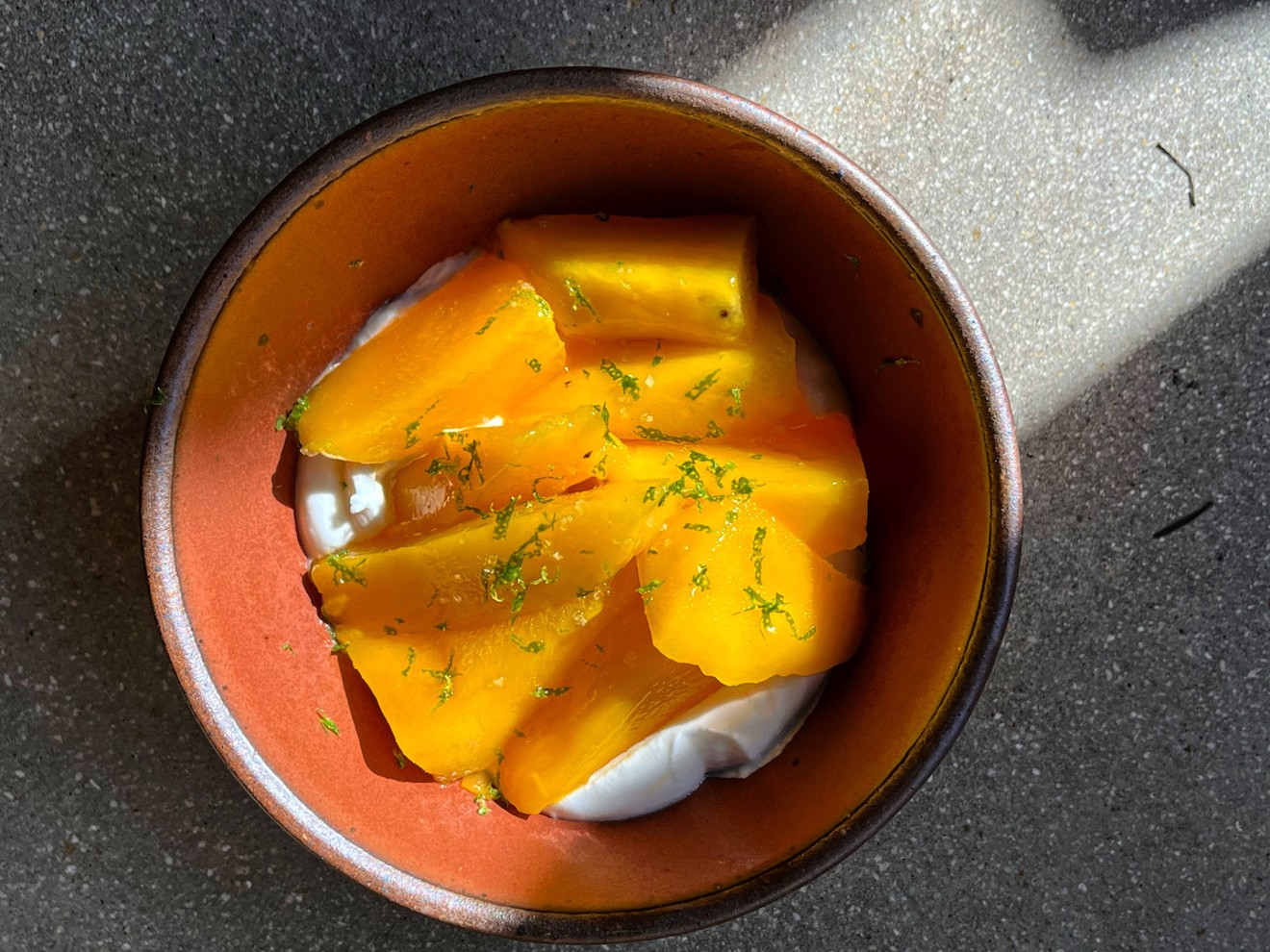 As a regular, Kramer would converse with the cafe owners about work, life, and her mango tree. "She was talking about how she has this gigantic mango tree, and every year she doesn't know what to do with all these mangos," says Audrey Wright, co-owner of Paradis. "And we were like, 'We will absolutely take as many as you want to give us.'"

"The first time I showed up with a bunch, they were shocked," Kramer says. "Maybe they just assumed I was going to just bring them a dozen and call it a day."

Instead, she brought hundreds of mangos to the tiny cafe. In return for the bounty of fruit, Kramer reluctantly accepts glasses of wine.

A mangos-and-cream dessert became the first dish in what Paradis' owners dubbed on social media the "Major Mango Menu Takeover." The dessert ($6) starts with a spiced rum cream, topped with fresh mango cubes, and finished with flaky salt and the juice and zest of a lime. "We wanted that to be like a celebration of super fresh mangos," Wright says. "So we cut those up only a few hours before we serve them."

"It feels like my mangos have been fancified," Kramer adds.

At a time when inflation and supply chain breakdowns have driven up food prices, squeezing restaurant owners, South Florida chefs are taking advantage of gifted, bartered, or borrowed mangos from their customers' or employees' backyard trees — or even their own. And from the look of their menus, you wouldn't guess it was one of the worst years for mangos in decades.

"We had these series of random poorly-timed chill events, and so there's very little mango currently," says Alan Chambers, assistant professor of tropical fruit genetics and breeding at the University of Florida. Chambers works at a horticultural research center in Homestead, where he says some of his experiments had to be postponed this year because there just weren't enough mangos.

He says that cold weather can be good for mango harvests, as temperatures in the 40s and 50s stimulate flowering. But this year, just after one chill caused mango trees to bloom, another chill rolled in and killed the flowers before they had a chance to turn into fruit. "The timing was just perfect where the plants couldn't overcome the stress," Chambers adds. 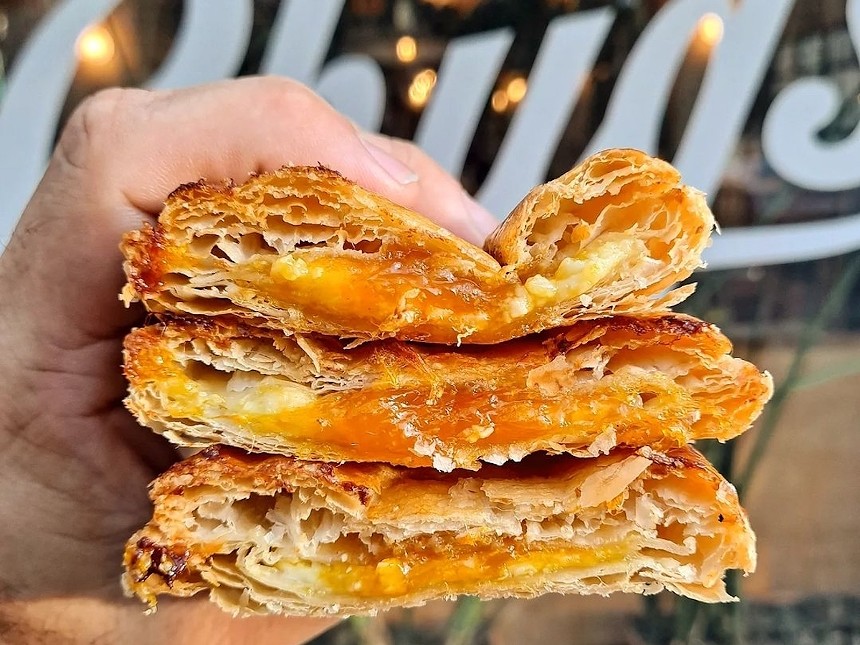 Mango and queso paslelitos from Pastelito Papi
Photo courtesy of Pastelito Papi
According to Chambers, many people's backyard trees fared better because it's a few degrees warmer closer to the coast.

And that's been good news for cash-strapped restaurants.

"I don't need to pay for mangos right now," says Giovanni Fesser, also known as Pastelito Papi, who is selling mango and queso pastelitos ($3.99) this season. He crowdsources backyard mangos on social media, bartering about three dozen mangos for a half-dozen pastelitos. Fesser says some people want to do the barter; some just want to get rid of them because they're sick of mangos rotting in their yards. He still has about 200 pounds of mangos in his freezer, which he uses to make mango jam for his pastelitos. "I've processed already 300 pounds," he says. "I'm getting sick of mangos myself."

Fesser had so many mangos that he shared them with Mikey Mayta and his wife, Keily Vasquez, who own  United States Burger Service (USBS) inside the Citadel (8300 NE Second Ave., Miami). When the couple posted on Instagram that they were looking for mangos, they didn't have much luck. "One person brought us a few, and that was about it," says Mayta.

One day, Fesser was in Miami Shores picking up backyard mangos from one of his informal suppliers and stopped at the Citadel nearby for a burger at USBS. Mayta brought him some mini apple pies to try. Fesser had seen the Instagram post and asked if mango pies were available. The answer was no because the mango supply hadn't met expectations.

"I was like, 'Bro, I got mad mangos in my car. How many do you want?'" Fesser says. He gave Mayta 30 to 40. Mayta says the mango pies are available for a limited time, depending on whether the restaurant has the ingredients on hand. Soon, he's expecting to roll out a strawberry variety. 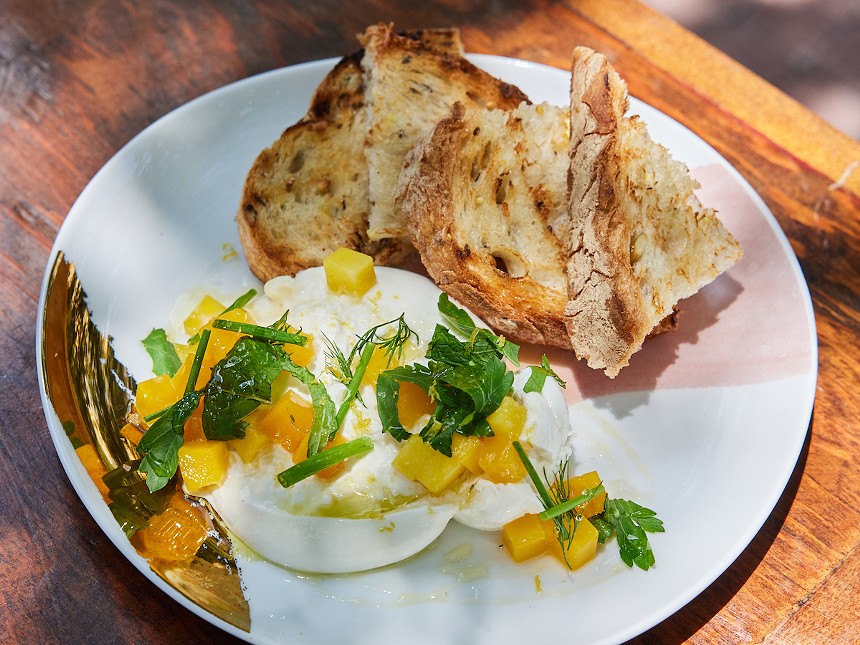 Mangos are paired with burrata at Rosie's: The Backyard.
Photo courtesy of Rosie's: The Backyard
Rosie's: The Backyard (7127 NW Second Ave., Miami) co-owners and husband-and-wife duo Akino and Jamila West hit the mango jackpot when they bought a home in Buena Vista a couple of years ago, complete with a mango tree in the backyard. When they first moved in, the tree was "skimpy" and wasn't producing much. The couple resoiled the yard, fertilized it with manure, and installed an irrigation system.

"Now, this year alone, our tree pumped out 100 mangos," Akino says. "They have no fibers. They're super silky, have great sweetness, and have that back end of acidity, which we really enjoy. We pull them when they're just starting to turn golden, right before the birds start to peck at them." The mangos are on Rosie's menu, paired with burrata from Mimmo's Mozzarella Italian Market in North Miami.

At La Cocina (1000 E. 16th St.) in Hialeah, backyard mangos are pureed and mixed with vodka, lime juice, and ginger beer to make its "El Burrito Sabanero" cocktail ($10). Cristina Suarez, beverage director for parent company, Kush Hospitality, says a neighboring café sells backyard mangos at a pop-up table, and staff members bring some from their homes. Suarez says she's preparing for when that steady stream of mangos dries up. She's been freezing some for the months to come.

Chef Allen Susser, the author of The Great Mango Book, literally wrote the book on mangos. He's glad that chefs have been sourcing mangos from locals to use in their restaurants. Susser has been trading meals for mangos for years. "Bring me a wheelbarrow of mangos, and I'll trade it for dinner for two. I'll do a four-, five-, or six-course mango dinner," he says.
KEEP MIAMI NEW TIMES FREE... Since we started Miami New Times, it has been defined as the free, independent voice of Miami, and we'd like to keep it that way. With local media under siege, it's more important than ever for us to rally support behind funding our local journalism. You can help by participating in our "I Support" program, allowing us to keep offering readers access to our incisive coverage of local news, food and culture with no paywalls.
Make a one-time donation today for as little as $1.
Jessica Bakeman
Contact: Jessica Bakeman