Fernando Mateo isn't afraid to beg them to return.

Frustrated by the restaurant industry's mass exodus, Mateo, one of 21 candidates vying to succeed De Blasio in November, arrived in Miami last week with a mission to bring back New York City’s transplanted restaurants and bars.

Last Monday, March 22, Mateo, a Republican, arrived in Miami to meet with nearly a dozen New York City business owners for a roundtable dubbed "The Welcome Back Series." The initiative will continue to run once a month through November, aimed at persuading businesses who've fled New York’s high taxes and anti-business environment to return, Mateo told New Times.

"It's why I came to Miami," Mateo said. "To let the restaurant, club, bar, and small-business owners know that New York City can change, and if they come back, they will see a city that will thrive once again."

One year after the onset of COVID-19, New York remains at a pivotal point as restaurant, bars, and nightlife operations continue to be among the most affected, with an increasing number of closures — many of them permanent.

While it's impossible to say exactly how many restaurants have gone out of business, the New York Times reports that as many as 2,800 businesses have closed since March 2020, when Gov. Andrew Cuomo closed all nonessential businesses after the state of New York reported its first death from COVID-19. Although New York restaurants were allowed to welcome indoor diners at 25 percent capacity as of February 12, the restrictions imposed on NYC businesses have taken their toll.

From the East Village to the Meatpacking District, neighborhood favorites from across the five boroughs have shuttered their doors, including decades-old institutions like 21 Club and more recent popular spots like Uncle Boons and Maison Premiere, not to mention the flagship McDonald’s near Times Square.

"In all likelihood, this is only the beginning of permanent closures in New York," Andrew Rigie, executive director of the New York City Hospitality Alliance, tells New Times. “Right now, we have to save as many of our local spots as possible. We've already lost countless restaurants and bars, with dozens more [closures] on the way." 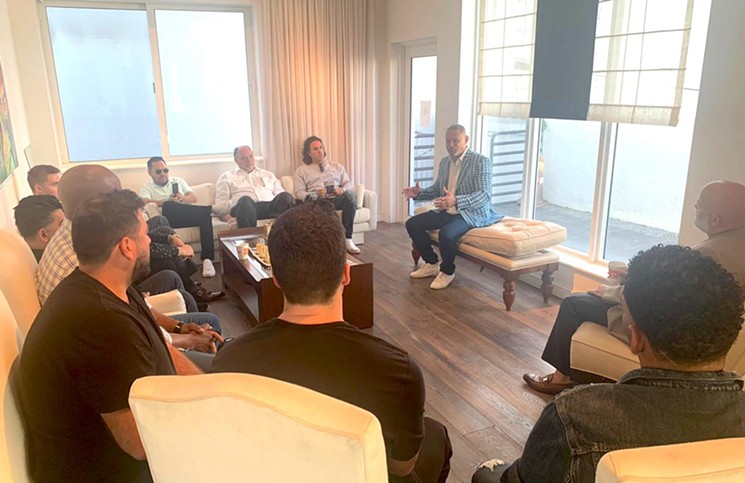 New York City mayoral candidate Fernando Mateo arrived in Miami this week to urge New York business owners to return home.
Oscar Herasme
"I sold my business and moved to Miami," Dennis Agalli, owner of a multimillion-dollar chain Rocky’s Pizza Group and Old Country Coffee Corp in Hudson Yards, told Mateo at the roundtable. "But make no mistake. I did not leave New York City; New York City left me. The city left me to fend for myself with no support, no public safety, dirty streets, high taxes, unwarranted harassment from city agencies, and excessive fines for no reason. For me, enough was enough."

In the meantime, a number of New York restaurants are establishing second homes in the Magic City. Over the past several months, Miami welcomed newcomers like Cote in the Design District, Momosan in Wynwood, Carbone in Miami Beach, and soon-to-come Pastis.

Outside Miami, Palm Beach County continues to welcome outposts for many of New York City's high-end establishments, from Swifty’s, Sant Ambroeus, La Goulue, and Le Bilboquet to Host Restaurant's new Delray Beach steakhouse, Avalon. And there are more to come.

Mateo promises to bring back businesses — and lost money — by implementing a tax-eschewing, pro-business administration he says will reward business owners and help spur economic revitalization for New York City. A self-described serial entrepreneur, Mateo is also a restaurateur; his most recent commercial venture is a partnership stake in Zona de Cuba, located on the rooftop of a historic building in the Bronx. The restaurant opened in May 2019 and employs more than 100 residents of the South Bronx.

"I'm not a politician," Mateo admits. "I'm running because I am the only one that has the experience as a business owner. I can tell you firsthand, I've felt the pain and suffering both New York City and the State of New York has brought on small business owners. If you've been in it, you realize what needs to be fixed."
KEEP MIAMI NEW TIMES FREE... Since we started Miami New Times, it has been defined as the free, independent voice of Miami, and we'd like to keep it that way. With local media under siege, it's more important than ever for us to rally support behind funding our local journalism. You can help by participating in our "I Support" program, allowing us to keep offering readers access to our incisive coverage of local news, food and culture with no paywalls.
Make a one-time donation today for as little as $1.