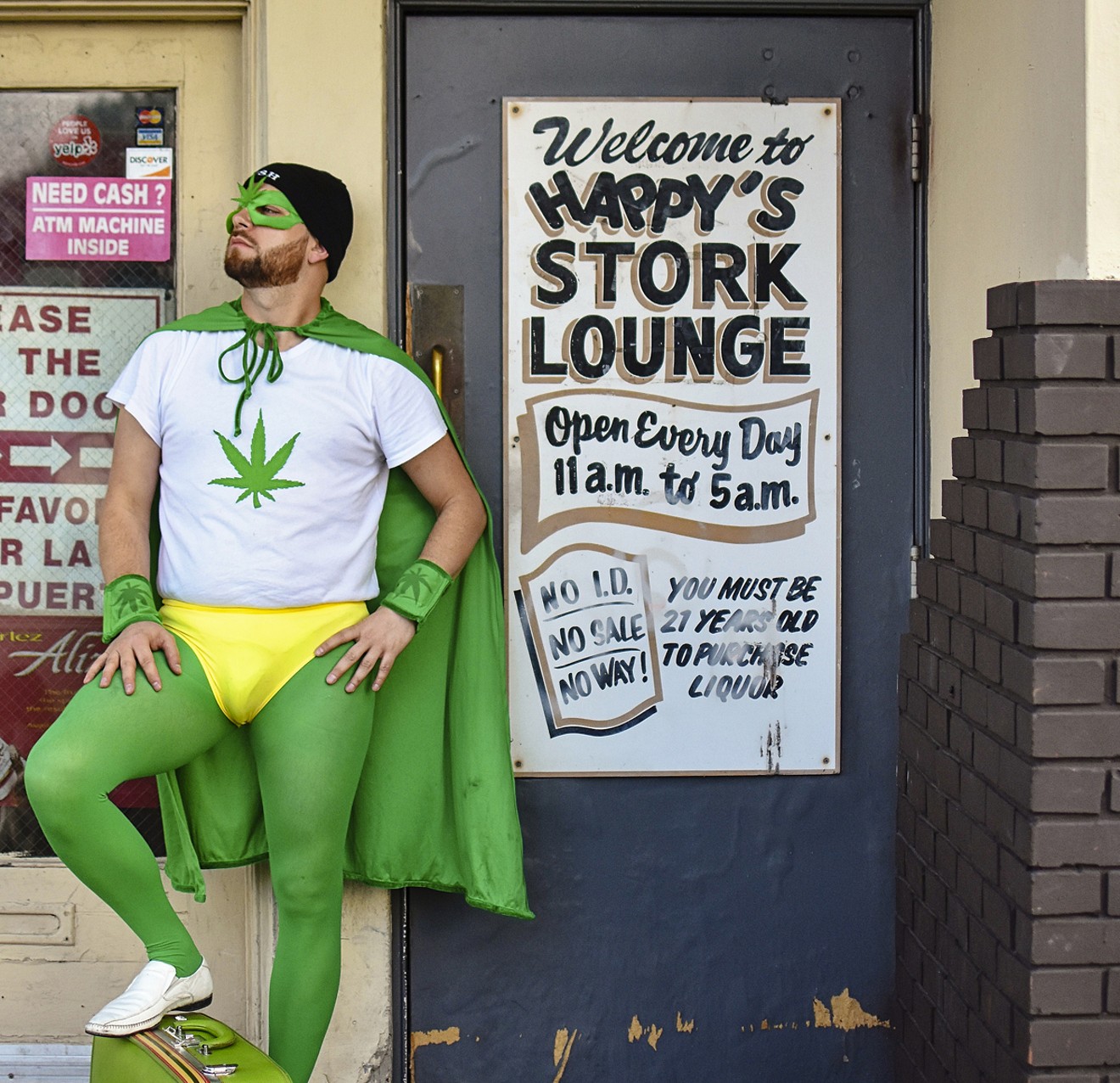 Who is that masked man? Natalia Parra

It's late afternoon on a recent Saturday, and a man wearing a green cape, green tights, and a mask with a marijuana leaf pinned between the eyes strolls into North Bay Village's Happy's Stork Lounge & Liquor.

Stepping up to the bar, he draws a few puzzled looks from patrons who grin and shrug before returning to their pints and whiskey. It's hard to find anyplace these days that still allows smoking, but on this island between Miami Beach and the mainland, Kaptain Kush is in his element.

"There's nothing better than a cheap, cold beer and a smoke after a long day of fighting crime," the Kaptain says while adjusting the bulge in his yellow Speedo.

He's not out to capture pimps, pushers, and identity thieves. This crusader for chronic justice is more a champion of the little guy. He's built a restaurant empire by embracing counterculture culinary obsessions — from craft beer and grass-fed burgers to brownies served with dime bags of dried mint leaves. Now, as the pot-powered Kaptain Kush, he's decided turn that eye for the weird and wonderful to the city's lesser-known eateries and landmarks that make Miami great. He visits places such as Happy's Stork several times a month in full superhero gear, often following an early-morning wake-and-bake or a late-night chief.

"This is the hero we need," says George Reyes Jr., a lanky, red-eyed, 28-year-old cryptocurrency trader and consultant. "I'm wanted by governments in six countries. I know some bad guys — this is a good guy."

The good guy's alter ego is Matt Kuscher, a 39-year-old, third-generation restaurateur. From the '50s to the '80s, his grandfather owned a fleet of bars in New York and South Florida. His dad oversaw cafeterias and Dunkin' Donuts locations in Washington D.C., where Matt was born and raised before moving south in the late '90s to attend Florida International University. Then he moved on to management positions with Hillstone Restaurant Group and other large-scale outfits.

He recoils in very unsuperhero-like fashion when the boiling broth burns his mouth.

His first solo success came in 2011 when he opened LoKal in Coconut Grove. The eatery quickly became a favorite for gut-busting, stoner-friendly chow. Kuscher improvised much of the design, even going as far as making the check holders himself. The place found a fast foothold in Miami's nascent craft beer scene and was one of the few spots to serve Jonathan Wakefield's innovative beer recipes before the young brewmaster opened his own place.

In 2014 came Kush, Kuscher's Wynwood bar with an appellation that nods to both his nickname and, well, something else. It began as a way bring better beer to the neighborhood but soon also became known for dishes such as alligator bites and a Johnny Utah burger crowned with a hunk of hot pastrami. 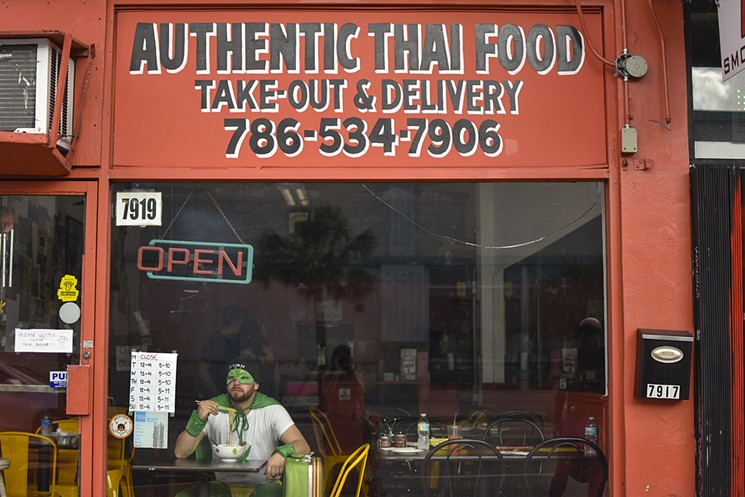 The Spillover, a more upscale seafood spot in the Grove specializing in tart European ciders and plates such as whole fried fish and slow-roasted alligator ribs, came in 2016. The following year, he opened Vicky's House on Commodore Plaza, where he re-created his mother's '80s kitchen, complete with Formica, loud wallpaper, and orgiastic milkshakes like the $15 Golden Girls: a banana concoction with a cream-cheese-frosting rim, Golden Grahams cereal, toffee bits, whipped cream, caramel, a Twinkie, vanilla wafers, and a homemade blondie with a cherry on top. Joint not included.

On deck is Stephen's Restaurant, one of the city's oldest remaining Jewish delis, which Kuscher bought this past November and then closed for renovation. A throwback to Hialeah's former life as a garment district, it's a huge risk and one that's proving to be his costliest, most time-consuming endeavor. But in light of Stephen's notoriety and Kuscher's reputation for turning the strange into success, it just might be a hit.

Yet they're nowhere near as strange as the few days each month Kuscher wakes up, straps on his weed mask and cape, and traipses around town trailed by a cloud of smoke while stopping for a bite and a dramatic picture in front of what he believes are the city's best-kept secrets. (He posts them all, of course, on the Instagram of Miami's "first and only superhero," @KaptainKush305.)

On a recent day, he and a small retinue including another weirdo in tights who calls himself "Mindhacker" find themselves in Greynolds Park, a 249-acre spread of lush greenery that includes a waterway where Seminoles once traded with early settlers. "This is such an amazing, hidden gem in Miami, and not enough people take advantage of it," he explains before heading to Dumpling King, a hole in the wall on NE 167th Street, where he orders a pair of bamboo steamers filled with pork and crab soup dumplings. He picks one up and takes a bite before recoiling in pain in very unsuperhero-like fashion when the boiling broth burns his mouth.

Next is a trip down West Dixie Highway as onlookers honk and holler at his costume before he stops at Chef Creole, where savory Haitian food is served. "Pikliz!" the Kaptain shouts. Moments later, he's digging into a Styrofoam tray heaped with fatty, crisp griot and red beans and rice. "This is perfect. This is Miami," he says before taking a long pull of watermelon soda.

"Duck soup!" he then proclaims before heading down Biscayne Boulevard to Cake Thai Kitchen, where he starts with broth before moving onto a spicy-sour pork stew, scallion and tapioca fritters, and cucumber salad.

Finally, the Kaptain and his entourage circle back to Happy's Stork, where he insists there's no better place to find happiness than in Miami. "And I'll never stop fighting to prove it to the world," he adds.