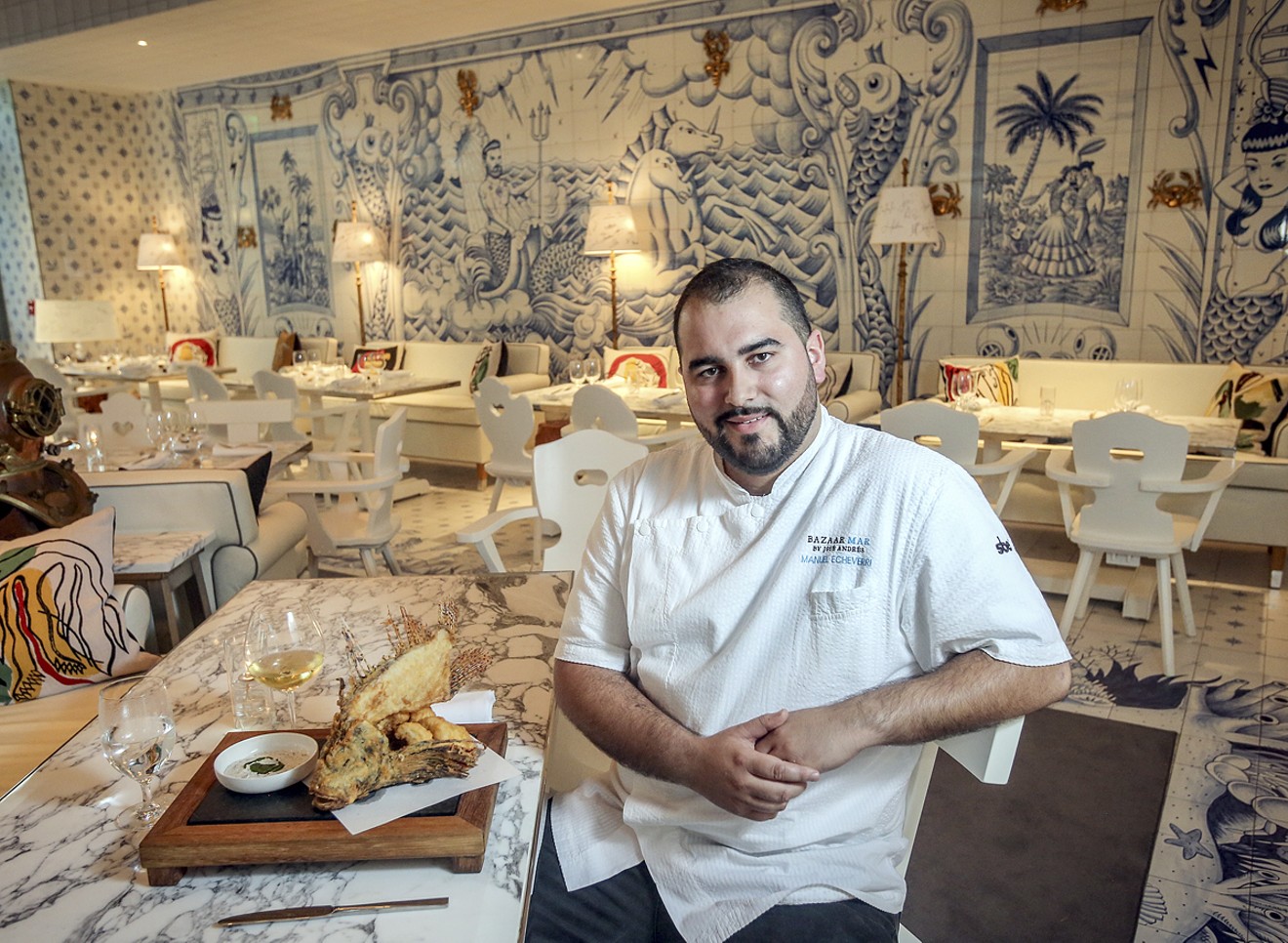 In a 2010 segment of 60 Minutes, chef José Andrés told Anderson Cooper "meat is slightly boring" while "vegetables and fruits are sexy." The pioneer of molecular gastronomy didn't share his thoughts on fish during the interview, but his latest eatery, Bazaar Mar, says it all. The James Beard Award-winning toque doesn't just find seafood sexy; he thinks it's downright seductive.

Indeed, the newest iteration of Andrés' popular Bazaar concept is best described as an upscale seafood shrine serving responsibly sourced, top-quality fare ranging from sea snacks and oysters to whole fish. Located inside the new SLS Brickell, the 210-seat restaurant features a raw bar and three open kitchens — each focused on executing a different portion of the expansive menu.

Designed by French master designer Philippe Starck, Bazaar Mar doesn't miss an opportunity to bring the ocean inside. A giant sculpture of a fish head with horns surveys the whimsical dining room, while smiling gold crabs adorn the tiled walls. The palette is unsurprisingly navy blue and white, with the walls and the ceiling depicting the adventures of Roman sea god Neptune.

It looks like a work of art and tastes so luxurious it puts the California roll to shame.

And nearly all the dishes are presented in a manner that evokes the sea. This is because Andrés thinks eating should be fun, and the dining experience ought to be as much about the brain and the eyes as it is about the tongue and stomach. Case in point: Bazaar Mar's bagel and lox. The smoked fish comes from Manhattan's famous Russ & Daughters, which was selected after the chef and his crew tried more than a dozen varieties and deemed this one the winner in taste and sustainability.

But rather than being proffered on a bagel, the lox rests atop air bread shaped like a fish. Each of the Bazaar restaurants in Miami, Los Angeles, and Las Vegas has a signature air bread that is crisp on the outside and hollow on the inside. Bazaar Mar's version is seasoned with an everything-bagel mix and stuffed with cream cheese. The finishing touch is pickled onions and a light lemon dressing. It's quite possibly the most adorable dish ever, and it tastes as lovely as it looks. The everything air bread lets the flavor of the fish and the velvety cream cheese shine through while still providing a desirable crunch.

Bagel and lox
Photo by CandaceWest.com

The bagel and lox starter perfectly encapsulates why Andrés has become such a successful chef: He takes familiar ingredients and flavors and reinvents them in a combination that makes diners gasp in awe.

Another example is the California "funnel cake" listed in the menu's "Sea Little Snacks" section. It's essentially a deconstructed California roll that begins with a layer of crisp seaweed, is followed by a layer of chopped cucumber, and is topped with a generous serving of Maryland blue crab mixed with Japanese mayo and flying fish roe. The "cake" sits on a white sheet of paper held by a silver stand in the form of an octopus. It looks like a work of art and tastes so luxurious it puts the California roll to shame. It's one of Bazaar Mar's best sellers.

Another must-try is Andrés' take on the ubiquitous tuna crispy rice. Called Neptune's pillow, it's composed of air bread stuffed with traditional spicy tuna mix — the pillow — and topped with tuna sashimi that's been dressed with a hint of soy, lemon zest, and wasabi. Nothing newfangled here, but is it scrumptious.

A high-school dropout, the now-47-year-old Andrés trained with world-famous toque Ferran Adrià before leaving his native Spain for Washington, D.C., in 1993. He began with one tapas bar, Jaleo, but today oversees an empire that includes more than 20 eateries (only a few are called Bazaar), as well as a catering business. In 2015, he made headlines for backing out of a deal to open a restaurant inside the Trump International Hotel in D.C. after the presidential candidate disparaged Mexican immigrants.

Miami became well acquainted with the outspoken restaurateur in 2012 when he opened the Bazaar by José Andrés at the SLS South Beach. Andrés believes in promoting from within, so when it came time to hire a chef de cuisine for his seafood concept, he tapped 28-year-old Manny Echeverri from the only other Bazaar in town. The Colombian chef is a Cordon Bleu graduate and worked at Toscana Divino in Brickell before joining the Bazaar. It's a dream come true, Echeverri says of his new post, adding that working with Andrés has been nothing short of transformative.

One of Andrés' goals is to make Bazaar Mar the sort of place where diners can return regularly. It's why he instructed his crew to price the sashimi tasting platter at $24 — even though he contends that renders the dish unprofitable. The sampler includes two pieces of six sashimi varieties based on what's fresh. And if your server is well versed in the menu, he or she will inform you this is one of the few Miami restaurants to serve geoduck.

Despite its name, geoduck is a giant clam that has to be kept alive until it's served. Bazaar Mar has tanks by the front for this very purpose, and you can see the oddly shaped creature lying next to other clams, lobsters, and scallops. It resembles a raw scallop, but firmer and chewier, though not in a good way. Still, give it a try if only to say you've eaten geoduck. Less novel sashimi offerings, such as albacore tuna and king salmon, are excellent, however.

Those looking for something more filling can opt for an entrée such as the Ora King salmon from New Zealand. Chef Echeverri says the only reason salmon is on the menu is that the restaurant was able to find an honest farm. The protein is cooked in a wood-burning oven until it's supercrisp; then it's presented alongside its roe, which has been marinated in sake and seasoned with soy sauce. It's a clean and simple dish where the oily fish is the star.

Upon our waiter's recommendation, we paired the salmon with an order of roasted cauliflower. It's prepared in a charcoal oven called a Josper and plated with a preserved lemon sauce, pine nuts, and pomegranate seeds. The creamy citrus sauce is nice, but the cauliflower lacks a certain je ne sais quoi.

An evening at Bazaar Mar is time well spent. Service is smooth, the crowd is fancy but unpretentious, and the cookery is imaginative without getting carried away. It isn't cheap, though, so come prepared to spend $75 to $100 per person on food alone to feel full.

KEEP MIAMI NEW TIMES FREE... Since we started Miami New Times, it has been defined as the free, independent voice of Miami, and we'd like to keep it that way. With local media under siege, it's more important than ever for us to rally support behind funding our local journalism. You can help by participating in our "I Support" program, allowing us to keep offering readers access to our incisive coverage of local news, food and culture with no paywalls.
Make a one-time donation today for as little as $1.
Valeria Nekhim was born in the Ukraine and raised in Montreal. She has lived in Manhattan and Miami. Her favorite part of food writing is learning the stories of chefs and restaurateurs.
Follow:
Twitter: @valerianekhim