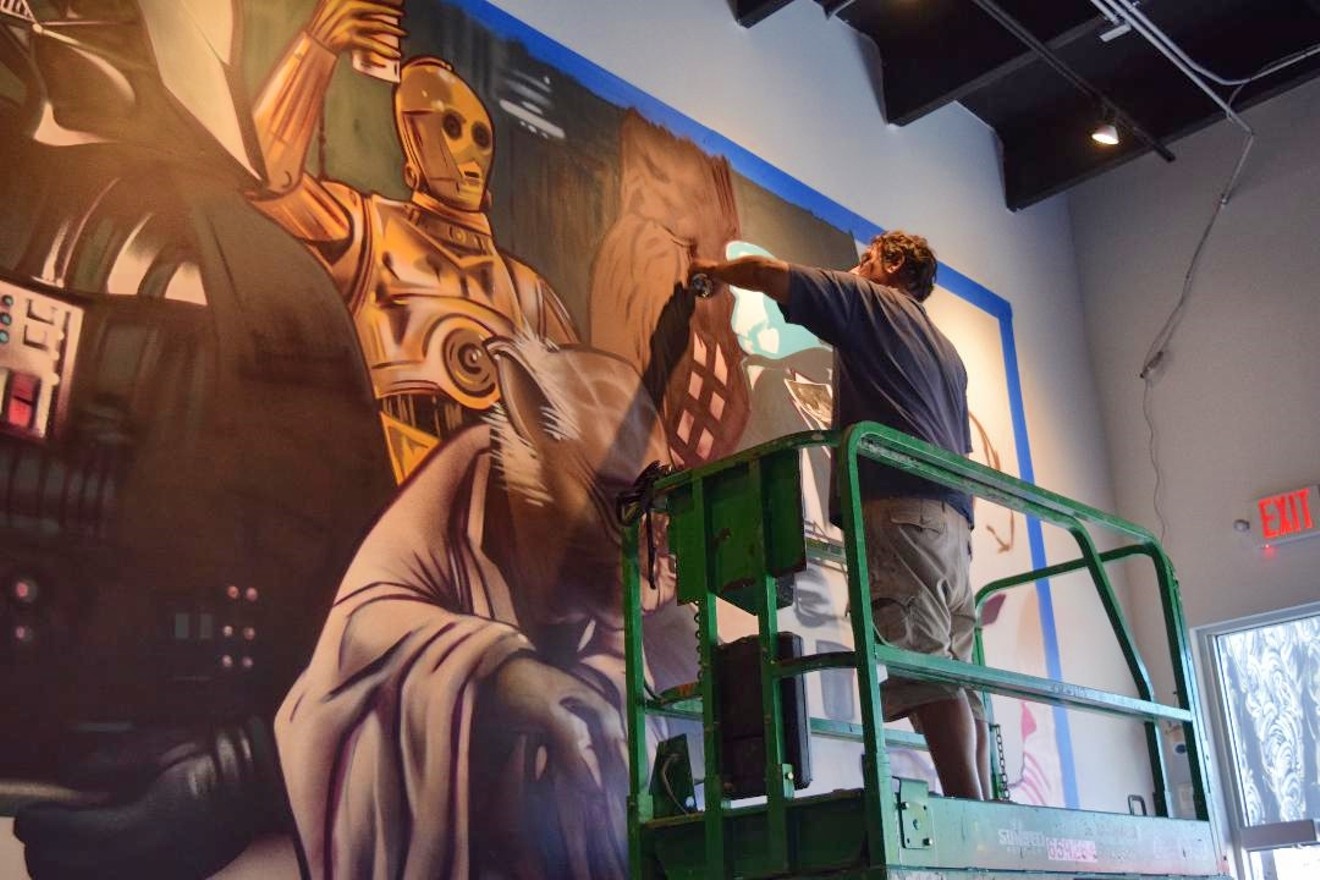 Artist Claudio Picasso (AKA CP1), who painted the taproom's original Star Wars mural, has created a completely new take on the movie's cantina scene. Taking up the largest wall of the 1,200-square-foot taproom, the mural portrays 14 classic characters, including Yoda, Han Solo, Chewbacca, Princess Leia, and Darth Vader. The famous Mos Eisley Cantina has been turned into a taproom, where Vader is seen serving a dark beer. Picasso says each character has its own dynamic. "Lando is talking to Leia at the cantina, while Han is looking at them from across the bar." Picasso also used artistic license by adding droids as servers in the mural. "In the movie, droids aren't allowed in the cantina." 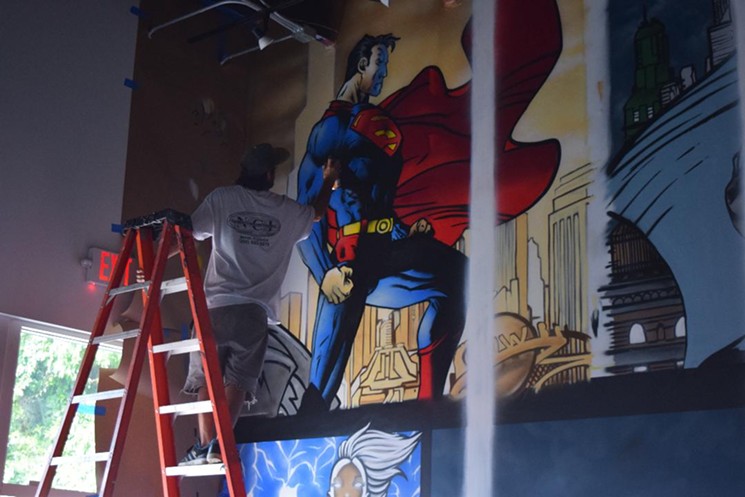 Rocco Riggio
On the opposite wall, artist Monzernater's work includes superheroes from the Marvel and DC universes. Wolverine, Iron Man, Storm, Batman, and Superman are strong figures in full color, each living in their own world.

The most striking addition to the brewery is a bar table that depicts Han Solo encased in carbonite. The table features color-changing technology and is bound to be one of the most Instagrammed pieces of furniture in Miami.

Other renovations include new lighting, flooring, and seating for the bar, including six tables with 20 seats total and 28 barstools. A second phase of the renovation will revamp the area behind the bar.

Wakefield says the refresh was sorely needed. "I was looking at the old Star Wars mural and all the holes and dings that it received over the years. I thought it just looked beat up and that the place needed an update, and that's exactly what we went after."

The brewery founder says he's elated with how the murals turned out. "The cantina scene is unbelievable. It destroys the old one, and we finally have a comic book wall."

With the two murals and Han Solo table in place, the J. Wakefield taproom takes on a distinct '80s vibe. That decade is trending, with Stranger Things and the upcoming season of American Horror Story both paying tribute to the era. Wakefield says he didn't aim for that look, but he's fine with the brewery being identified with that decade. "I think there's maybe a renaissance of that era. That's what I grew up with. As long as they don't bring back Jazzercise and New Coke, I'm good with it."

The brewery reopens tomorrow, July 18. The first new-release party at the revamped Wakefield is set for Saturday, July 27, at 10 a.m. with the debut of Big Poppa and the Gauntlet series.

The Gauntlet series of 17 percent ABV Russian imperial stouts includes these seven 500ml bottles:
Wristbands will be distributed beginning at noon Monday, July 22, while supplies last. July 27, wristband-holders may purchase a full allotment of beers, which will consist of two bottles of Big Poppa and one complete bundle of the Gauntlet Series (nine bottles in total) for $220. Non-wristband sales will begin afterward. All beer releases are subject to change.

J. Wakefield Brewing. 120 NW 24th St., Miami; 786-254-7779; jwakefieldbrewing.com.
KEEP MIAMI NEW TIMES FREE... Since we started Miami New Times, it has been defined as the free, independent voice of Miami, and we'd like to keep it that way. With local media under siege, it's more important than ever for us to rally support behind funding our local journalism. You can help by participating in our "I Support" program, allowing us to keep offering readers access to our incisive coverage of local news, food and culture with no paywalls.
Make a one-time donation today for as little as $1.