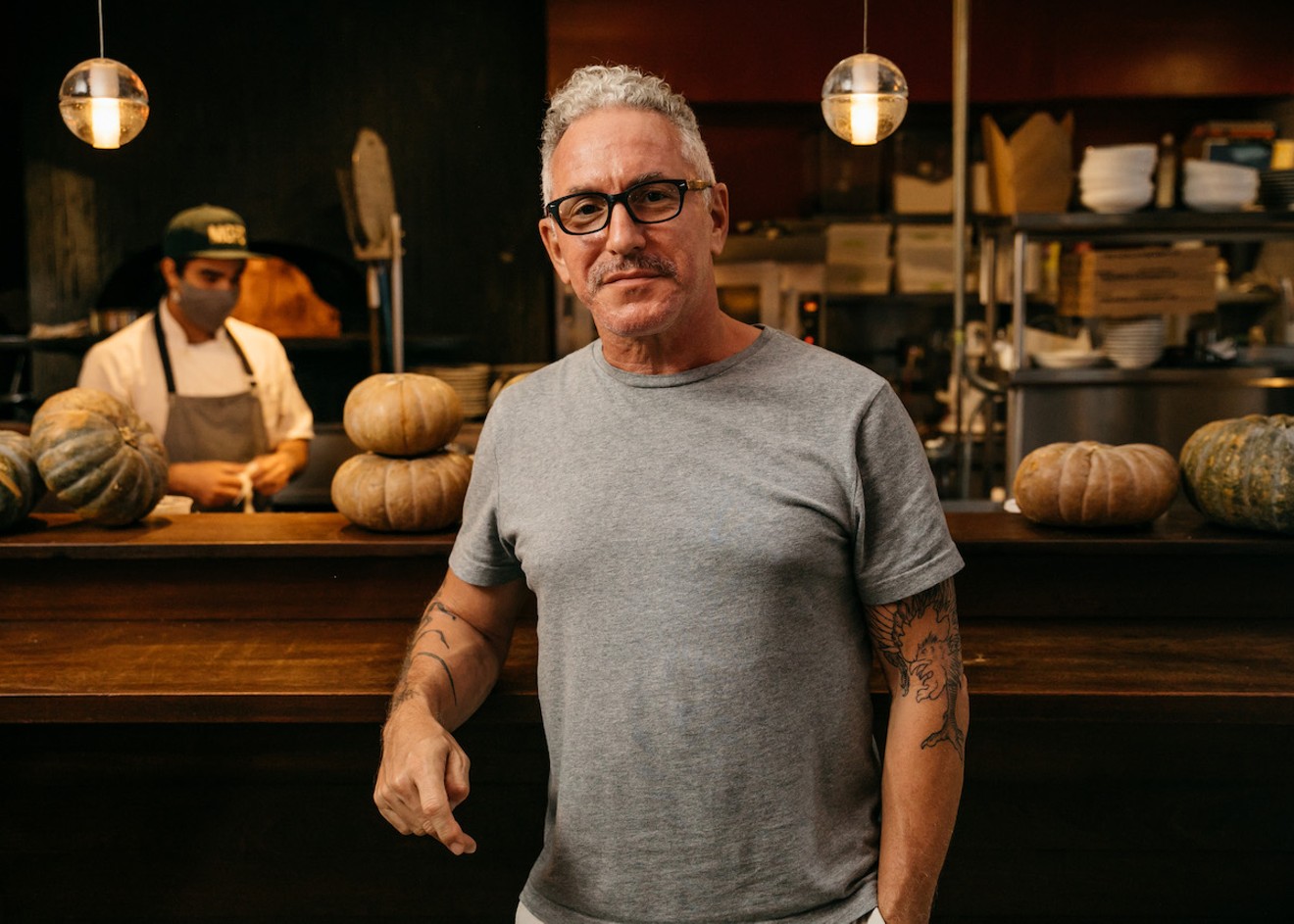 Chef and restaurateur Michael Schwartz at his namesake restaurant, Michael's Genuine Food & Drink. Photo courtesy of the Genuine Hospitality Group
On March 13, 2007, a young chef by the name of Michael Schwartz opened a restaurant in an area of Miami that held the promise of future development.

"I remember bringing my best friend, who is now my business partner, over to the restaurant," Schwartz says. "The sign had just gone up and I wanted to show it to him lit up in the evening. He said, 'OK, but I'm not getting out of my car.' That was the Design District 15 years ago.

"The Rolex store next to Michael's?" he goes on. "That was an empty lot that served as our parking lot. I remember we had a big smoker out there that we set up."

Now, of course, the Design District is one of Miami's toniest neighborhoods, filled with luxury brands like Dior, Louis Vuitton, and the abovementioned watch company. Schwartz says his little restaurant is the "lucky recipient" of being part of an area of the city he calls "super interesting."

This week, Michael Schwartz celebrates the 15th anniversary his namesake restaurant on the heels of a major renovation that included an expanded kitchen and a retractable roof for the outdoor patio.

And, though Schwartz emphasizes that the renovation was much needed, he says he worried a bit that some regulars would prefer that the restaurant stay the same.

He recalls six years ago when he expanded the bar into a semiprivate dining room. "We closed for a few weeks. The day we reopened, the first person who walked through the door said, 'Where's my room?' It was the worst room, and nobody wanted to sit there, but this one man missed it."

Schwartz shared his fears with his designer and came away feeling the newly designed space hits all the right marks — or, as he puts it, "the perfect balance between sophistication and simplicity."

In a city that sees restaurants come and go, few have the staying power of Michael's Genuine. When asked for his secret to longevity, Schwartz points out, "Well, we're genuine." He then clarifies. "Michael's opened up with the simplest of intentions: We want to feel like we serve the community. We don't want to be the place that's engineered in any way."

Schwartz's restaurant was also one of the first in Miami to embrace the farm-to-table movement. "It took me a while to figure out the seasons in Miami and cultivate a relationship with local growers," he says, though he concedes that while it's important to support local farms and fisheries, reality sometimes sets in. "I would never say that the majority of our product is local or organic. It's impossible in Florida."

The restaurateur is also proud of the chefs who've worked at Michael's — like Hedy Goldsmith, Niven Patel, Michael Beltran, and Dallas Wynne, to name only a few. "There's a good list of people that are thriving and that's exciting. I love it," he says, adding that he's also happy to give advice to any young chef in the Miami area. "I'm always willing to share. The more we share resources and recipes and stories, the better we all are. I'm always available if someone wants to bend my ear."

Looking to the future, Schwartz says he wants to get more involved in giving back to the community that has embraced him. One example: "We're working with Rethink Food to decrease food waste."

He's feeling a sense of renewal about his own culinary journey, too, on the heels of being named a semifinalist for a 2022 James Beard Award in the "Outstanding Chef" category. In 2010, Schwartz won a James Beard for "Best Chef: South." He says he was pleased to see so many Miami chefs up for awards this year. "There are some good people on this list. We gotta kick some ass this year."

This week, though, is about celebrating 15 years of Michael's Genuine.

The restaurant's executive chef, Bradley Herron, and chef de cuisine, Dillon Wolff, have updated the menu. This week, the restaurant will bring back some favorite dishes as daily specials up through the official anniversary date of Sunday, March 13. On that day, diners will be treated to a glass of Champagne with their meal to celebrate the occasion.

And Schwartz plans to ask some of the regulars to recount their memories of the place on video, for posterity. "We're going to ask people about why Michael's is special to them," he says. "We want to embrace the people who have embraced our restaurant."

Michael's Genuine Food & Drink. 130 NE 40th St., Miami; 305-573-5550; michaelsgenuine.com.
KEEP MIAMI NEW TIMES FREE... Since we started Miami New Times, it has been defined as the free, independent voice of Miami, and we'd like to keep it that way. With local media under siege, it's more important than ever for us to rally support behind funding our local journalism. You can help by participating in our "I Support" program, allowing us to keep offering readers access to our incisive coverage of local news, food and culture with no paywalls.
Make a one-time donation today for as little as $1.