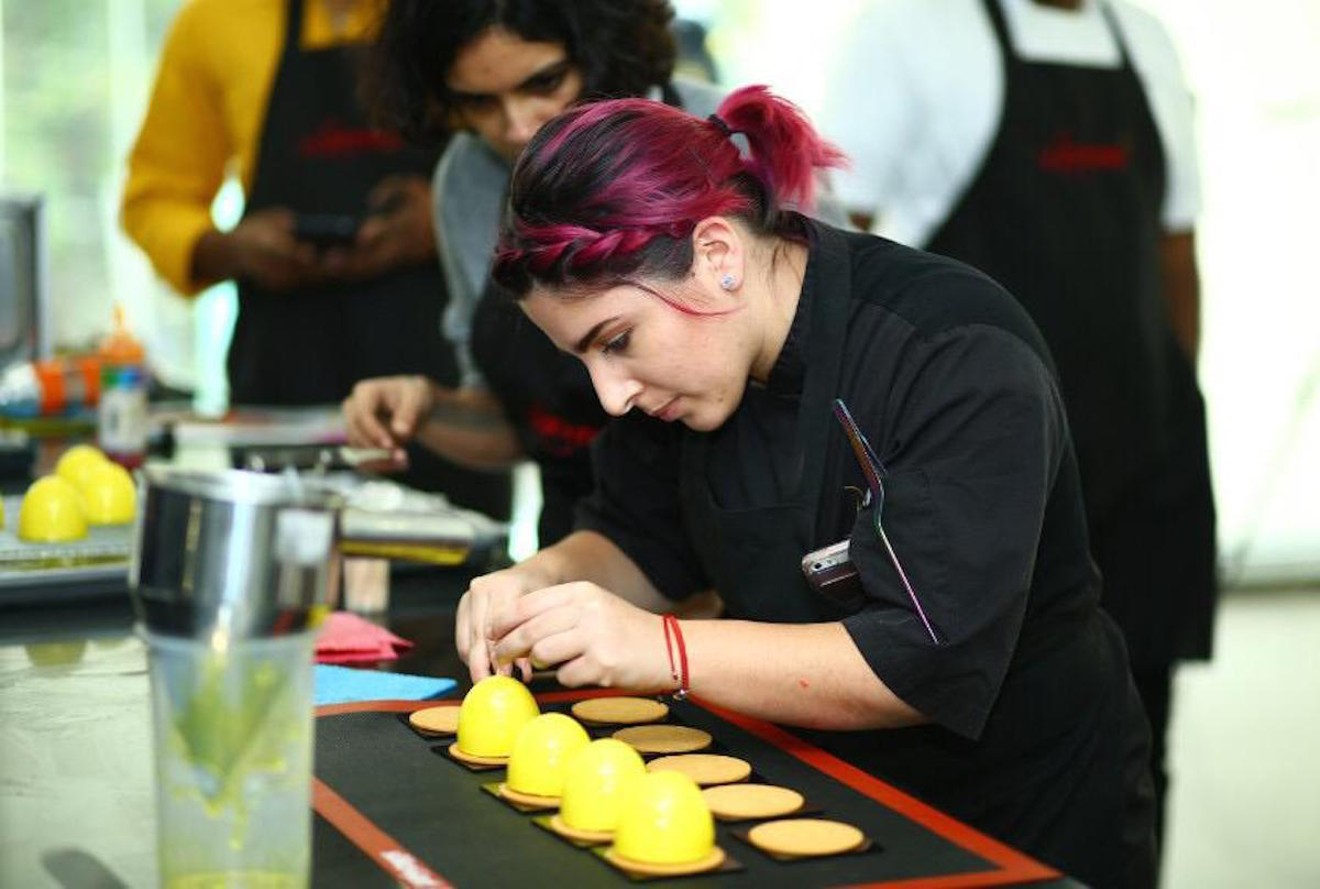 As the #MeToo movement's momentum gives many at the heights of the restaurant world their long-delayed comeuppance, the industry continues to grapple with the unequal representation of women in the upper echelons of kitchens or the media.

One unscientific, untested hypothesis is that men are peacocks and evolutionarily predisposed to flaunt whatever they have. Across the animal kingdom, males of most species boast some ornate feature or outlandish behavior. On the Galapagos Islands, for example, the male blue-footed booby begins the mating season by presenting the female with a small stick or stone. He then tips his beak, tail, and wings to the sky; whistles; and high-steps around the female with a show of his feet. Men, whether they swim, fly, or fillet, need attention.

But even if female cooks seek less attention, they're working in kitchens as worthy of acclaim as those of their preening male counterparts. Pastry chef Karina Rivera, one of Antonio Bachour's top lieutenants, has started a group called WomenChefs305 that will serve as a supportive framework for female cooks. Moreover, a stroll through the underbelly of any hotel in Miami Beach reveals plenty of women with their heads down and knives out. The women are there. Get to know a few of the up-and-coming female chefs and cooks working in and running some of the city's best kitchens.

Eka Wassel with husband Fouad.
CandaceWest.com
Eka Wassel of Awash Ethiopian Restaurant. Eka was born in Ethiopia's capital, Addis Ababa, and though her mother was a respectable cook, it was a neighbor named Etey Ababu who taught her the foundations of Ethiopian food. There were lessons in how to make injera — the airy sourdough flatbread created with flour from the iron-rich grain called teff, which is ubiquitous in Ethiopia — as well as the heavily spiced clarified butter that permeates the raw beef dish known as kitfo ($12.99). Wassel oversees the daily preparation of fragrant stews such as wat ($13.99) and the ginger-spiced beef stew wot ($14.99). 9934 NW Second Ave.,
Miami Gardens; 305-770-5100; awashmiami.com.

Samira Saade at work.
Curtesy of Samira Saade
Samira Saade of Bachour. For years, this 24-year-old who sports a short, shiny crop of technicolor hair was the first to arrive at the Brickell bakery where pastry chef Antonio Bachour was once a partner. Most are zombies at 4 a.m. Not Saade. She'd start frantically popping hundreds of croissants and other pastries into ovens. A moment later, she'd be across the room laminating layers of butter and dough into even more flaky sweets. As the kitchen began filling with bodies, she'd begin directing traffic, breaking down tasks among white-clad pastry cooks laser-focused on creating the pristine desserts on which Bachour has built his highly successful reputation. After Bachour split from the Brickell bakery, he recruited Saade and Karina Rivera to join him on his jaunts around the world, where he imparts his uncompromising skills upon eager, well-paying students. Over the past year, Saade has been to South Korea, Thailand, India, Ukraine, Romania, Mexico, and Colombia. And when Bachour's new Coral Gables bakery opens at 2020 Salzedo next month, she'll be its pastry sous-chef. 2020 Salzedo St., Coral Gables. Opening soon.

Maggie Hyams at Wabi Sabi, where she's responsible for preparing the all-important sushi sometimes three times a day.
Courtesy of Maggie Hyams
Maggie Hyams, assistant chef at Wabi Sabi by Shuji. This Broward County-born cook never meant to immerse herself in Japanese cuisine and culture, but when she was hired to work under chef Shuji Hiyakawa, who once ran Kuro at the Seminole Hard Rock Hotel & Casino, she started down a path that today has her second in command at one of the city's best sushi spots. After graduating from J.P. Taravella High School in Coral Springs, Hyams, now 24, was accepted to the Culinary Institute of America but turned it down because of the high tuition. A catering gig led to a job at the Hard Rock, where she worked a broad swath of jobs in almost every corner of the hotel and casino before linking up with Hiyakawa, who took her under his wing. "Shuji had me work my way from the bottom up," Hyams says. She made the sauces, the rice vinegar, and all of the other details that make pristine sushi a reality. "This cuisine is very intricate and takes a lot of dedication and the ability to sometimes put aside your feelings and frustrations to deliver at a high level," she says. "It's also about much more than the food. It's about the culture; it's about the traditional. And I have so much more to learn." 851 NE 79th St., Miami; 305-890-7228; wabisabibyshuji.com.

Estefania Andrade in the kitchen at Obra.
Courtesy of Miami Chefs
Estefania Andrade, sous-chef at Obra Kitchen Table. This 22-year-old cook has trained under some of Latin America's best chefs. But while doing time in the kitchens of titans such as Enrique Olvera and Carlos Garcia, the Caracas-born Andrade was constantly worried about the rest of her family back home as Venezuela's security and collapsed under the regime of President Nicolás Maduro. Luckily, her family won a green-card lottery and has since moved to Miami, while Andrade, who completed an internship at Garcia's Alto in Caracas and Olvera's Cosme in New York City, landed a job at her old boss' new spot in Brickell. Here, she helps oversee a kitchen that has become a fast favorite for its lineup of classic Venezuelan and Latin American dishes amped up with thoughtful ingredients and sophisticated techniques. 331 Brickell Bay Dr., Miami; 305-846-9363; obramiami.com.

Camila Olarte in the Surf Club's kitchen.
Courtesy of Camila Olarte
Camila Olarte, sauté cook at Surf Club Restaurant. Olarte has traveled the world and worked in some of its best restaurants, but it was never a given. She's 29, Colombian, and from a professional family that expected her to pursue a career with high education requirements. One of her sisters is a lawyer. The other is a doctor. Her parents were shocked when she said she wanted to cook, but they remained supportive. It paid off when she landed a gig in Thomas Keller's kitchen in Surfside after working her way up, from kosher restaurants in the northern part of the county to Juan Manuel Barrientos' El Cielo, Francis Mallmann's El Fuego, and now the Surf Club. Though she says she's been lucky throughout her career and hasn't had any problems as a female cook, her diminutive size hasn't made it easy. "I'm five feet tall and 90 pounds, so maybe, in my case, I always have to work a little bit harder to prove myself to others," she says. "Everyone that hires me says, 'Maybe you’ll be manger or try pastry.' I hate that. I say I only want to work in or sauté, so I have to work harder." 9011 Collins Ave., Surfside; 305-768-9440; surfclubrestaurant.com.
KEEP MIAMI NEW TIMES FREE... Since we started Miami New Times, it has been defined as the free, independent voice of Miami, and we'd like to keep it that way. With local media under siege, it's more important than ever for us to rally support behind funding our local journalism. You can help by participating in our "I Support" program, allowing us to keep offering readers access to our incisive coverage of local news, food and culture with no paywalls.
Make a one-time donation today for as little as $1.