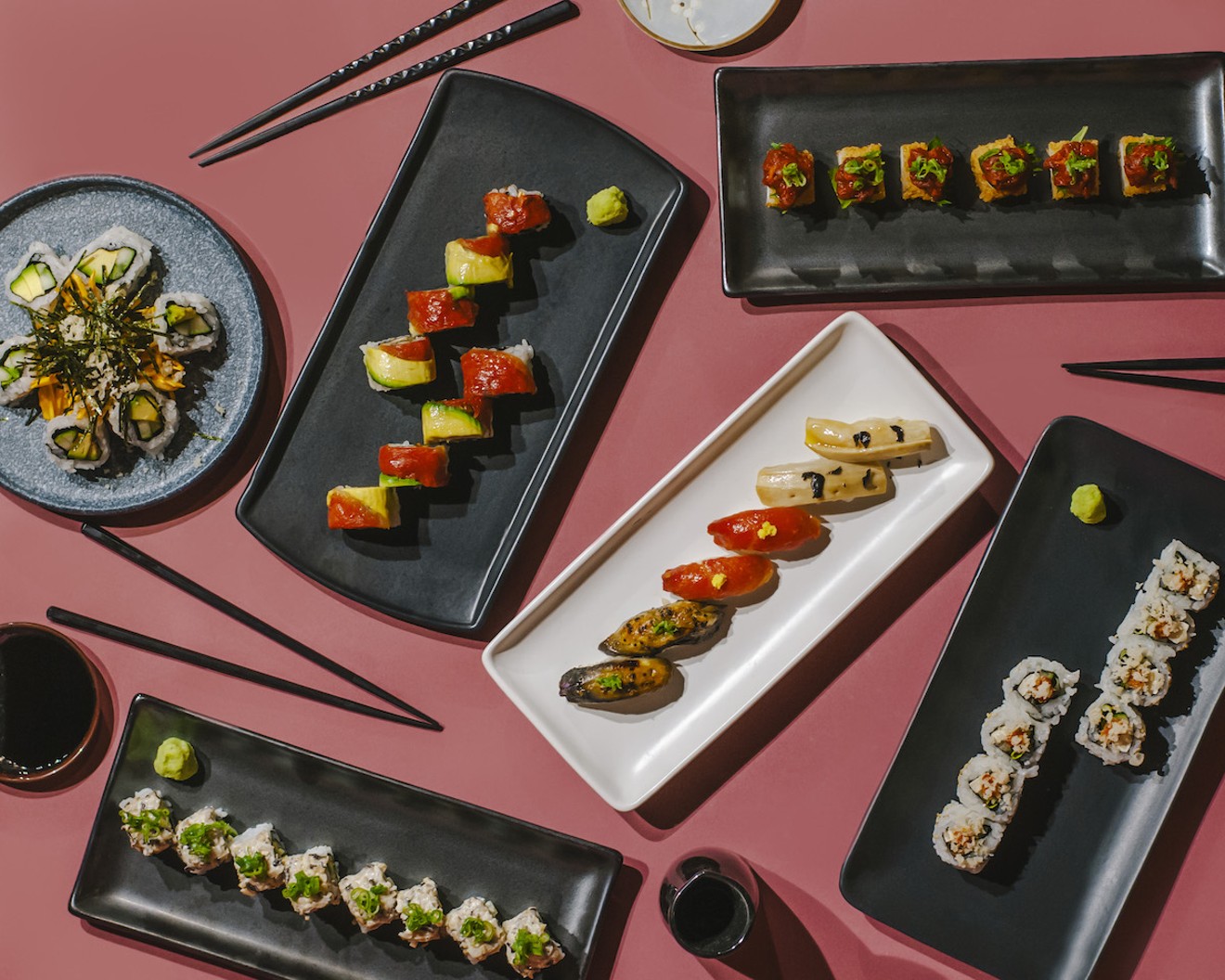 Planta Queen in Fort Lauderdale offers vegan-based bites during its first Dine Out Lauderdale. Photo by Steven Lee
Going vegetarian or vegan comes with only one problem: finding restaurants that cater to dietary needs without boring, overly-processed, or flavorless menu options.

And no matter which lifestyle choice you've made, all plant-based diners share one basic need — to avoid animal products in meals.

However, look no further than Miami Spice tasting menus if it's variety, flavor, and options you're after. They'll offer up dishes aplenty, compliments of the Magic City's most talented chefs.

To that end, here are this year's five best vegan-friendly menus to sample during Miami Spice.

Minty Z is one of Miami's most popular vegan and vegetarian-friendly restaurants.
Photo courtesy of Minty Z

3206 Grand Ave., Coconut Grove
786-409-7151
mintyz.com
One of Miami's hottest plant-based dining experiences serves up Asian fusion cuisine prepared from scratch, be it plant-based dim sum, Far East-inspired baked goods, or creative power foods and seasonal produce used to recreate some of the cuisine's most delicious dishes. For lunch and dinner, priced at $28 or $45 per person, diners can jumpstart a meal with a choice of sangria, lychee martini, or soft drink — a prelude to the three-course meal to come. Begin with a refreshing cucumber salad, savory buckwheat scallion pancake, or creative Cuban corn wontons replicating the famous sandwich with a vegan "ham" cashew cream filling. Follow it up with pineapple or kimchi fried rice, stir-fried tofu, General Tso Brussels sprouts, or "beef" chow fun with a faux-egg scramble and pan-fried rice noodles. Then enjoy bao beignets for dessert. 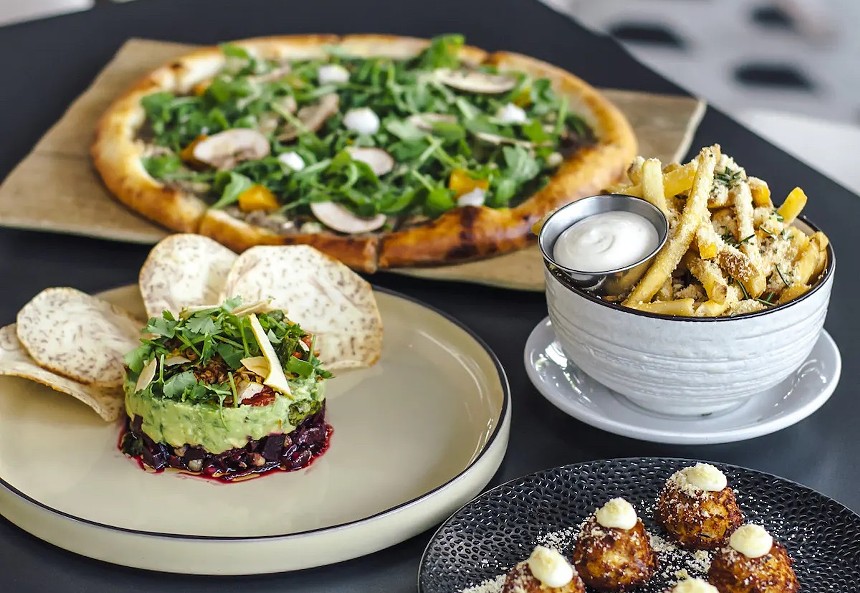 850 Commerce St., Miami Beach
305-397-8513
plantarestaurants.com
Planta — the upscale, plant-based, fine-dining restaurant in South Beach's South of Fifth neighborhood — is a no-brainer for vegetarian and vegan diners. Chef David Lee makes maki rolls, nigiri, and dumplings while exploring large plates such as burgers, pizza, and pasta. Dine for lunch or dinner, priced at $28 or $45 per person, and you'll be given a plethora of options. Explore the entire menu with popular selections like the ahi watermelon or truffle miso eggplant nigiri and rolls that take a creative twist like the baked "crab" that's really hearts of palm with a spicy mayo. Cauliflower tots and "bang bang" broccoli are popular choices. Or sample the Italian options with pizza (there's a gluten-free dough, too) that marries veggie-rife toppings like mushrooms and squash to roasted rosemary potatoes and smoked tempeh — all of it topped with a cashew mozzarella. We could go on, but you get the idea. Pubbelly is serving up a special vegetarian menu during Miami Spice.
Photo courtesy of Pubbelly Sushi

19565 Biscayne Blvd., Aventura
305-690-7710
pubbellyglobal.com
For a dedicated plant-based Miami Spice menu, look no further than Pubbelly Sushi. The eclectic neighborhood gastropub is known for its hyper-creative fusion of Japanese and Latin-inspired dishes by founding chef partner José Mendín. For Miami Spice, its vegetarian-only menu, priced at $28 per person, offers up a three-course meal with a cucumber and shiso tequila cocktail. Start with a snack of shishito pepper skewers or avocado crispy rice before moving on to a shiitake bao bun and vegan mochi ice cream.

R House offers a vegan substitute for each course of its Miami Spice menu.
Photo by Food Shots by Dan

2727 NW Second Ave., Miami
305-576-0201
rhousewynwood.com
Situated in the heart of the Wynwood Arts District, Miami's graffiti-lined cultural core, R House is perhaps best known for its lively dinner scene and raucous weekend brunches. For Miami Spice, get to know its creative cuisine as well. The menu, created by executive chef/owner Rocco Carulli, features a variety of shareables that boast bold Latin flavors. The best part: During Miami Spice, the entire menu offers guests a vegan substitute. That includes a choice of vegan tostones — grilled hearts of palm, avocado, and an heirloom tomato pico — or wild mushrooms in a red tomatillo sauce with chimichurri, molho a campanha, maduros, and coconut rice. Don't miss the off-menu vegan dessert that can be substituted during Miami Spice. It's a delectable combination of roasted pineapple-crumble accompanied by a rich and creamy vegan coconut sorbet. The Miami Spice offerings at the Strand present diners with a largely vegan and vegetarian-friendly menu.
Photo courtesy of the Strand at Carillon Miami

The Strand at the Carillon

6801 Collins Ave., Miami Beach
305-514-7474
strandcarillonmiami.com
The Strand at Carillon Miami is best known for its Mediterranean contemporary dining experience. The carefully crafted menu sources ingredients from local farms and places a spotlight on Florida's organic offerings. Whether you find yourself in the main dining room or the bar and lounge inspired by the original "Tambourine Lounge," the Strand's beachfront views and nature-inspired design are bonus material. While the lunch and dinner Miami Spice menu isn't 100 percent vegan/vegetarian, most of the options are plant-based friendly. That includes starters like a watermelon and feta salad, roasted quinoa and vegetable bowl, carrot ginger soup, and entrees that range from crispy seared tofu to pasta primavera. For dessert, go for the Miami Vice sorbet, an icy treat that combines piña colada and strawberry.
KEEP MIAMI NEW TIMES FREE... Since we started Miami New Times, it has been defined as the free, independent voice of Miami, and we'd like to keep it that way. With local media under siege, it's more important than ever for us to rally support behind funding our local journalism. You can help by participating in our "I Support" program, allowing us to keep offering readers access to our incisive coverage of local news, food and culture with no paywalls.
Make a one-time donation today for as little as $1.