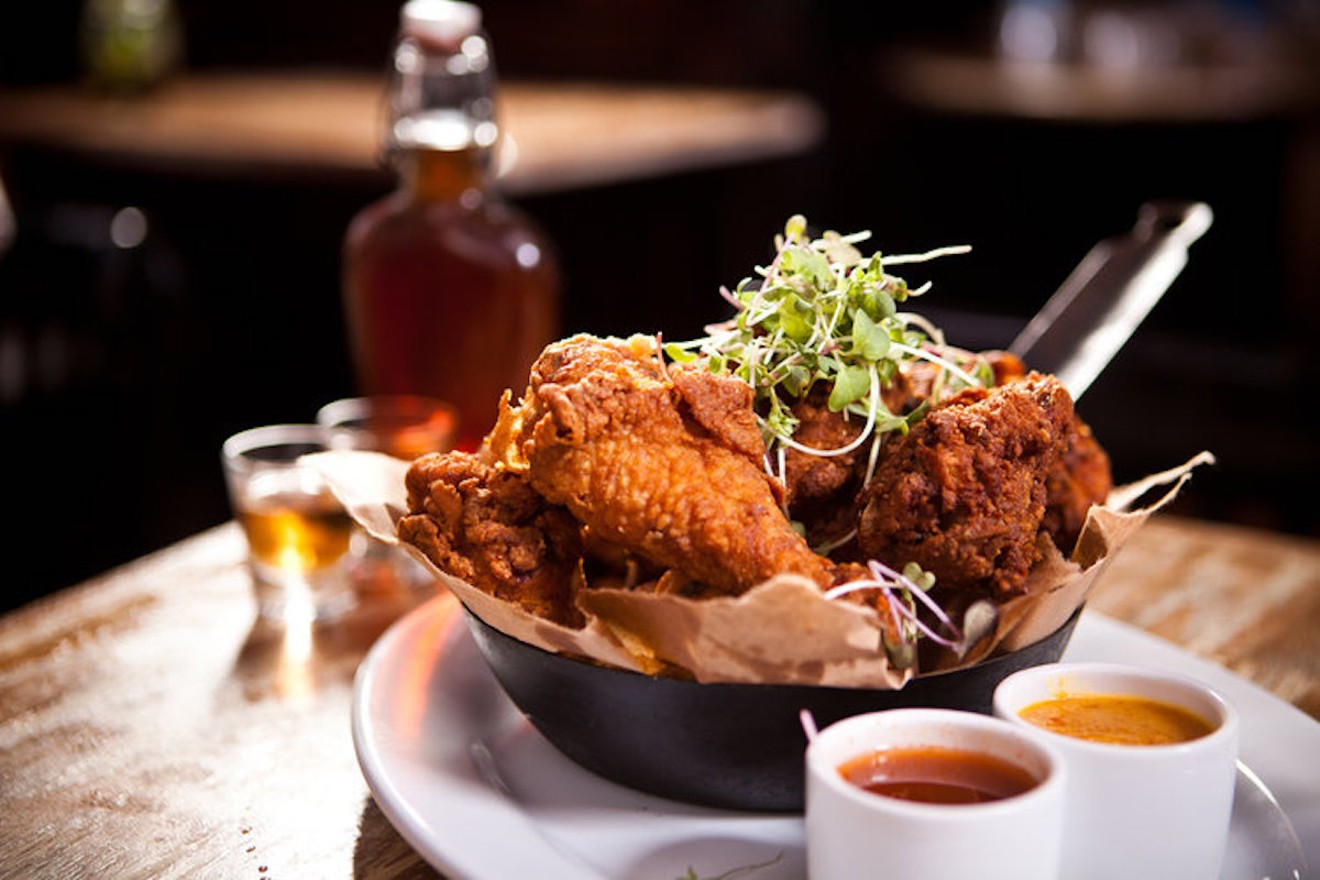 Chick'N Jones is open in Time Out Market. Photo courtesy of the Oprah Winfrey Network
Amaris Jones has worn many hats. The self-described lifestyle consultant is best known for her abilities around the kitchen. She has served as personal chef and event manager for celebrities like Rick Ross and Chris and Adrienne Bosh, but most Miamians came to know and love her food at South Street, a Motown-inspired restaurant in the Design District.

The restaurant, which specialized in fried chicken and pork-free soul food, abruptly closed in the spring of 2013. On Facebook, Jones posted, "South Street is closed...Stay tuned for what's next."

She kept busy on the private event circuit and popped up at the Forge for her "Fried Chicken Sundays," all the while secretly working on building her own fried chicken brand.

Then 2020 postponed her plans.

"I was supposed to sign a lease the week the pandemic closed dining rooms in Miami," Jones tells New Times. "The restaurant took a back seat and I had to go back to my private catering business."

But when the offer came to open Chick'N Jones at Time Out Market, she jumped at the chance.

The six-month contract allows her the freedom to make any necessary tweaks. "We're working out the concept. I know the product's good, but this gives me a good sense of how the brand is working."

That brand is a fast-casual fried chicken concept that offers healthier options of traditional Southern favorites.

The menu revolves around Jones' fried chicken, which is marinated in mustard, herbs, and spices for 24 hours. Jones says the 24-hour marination is key — any less and the chicken doesn't take on enough flavor. Any longer and the protein breaks down. "Sometimes if you marinate too long, the chicken turns to mush," Jones says.

The marinated chicken is dredged in flour and allowed to rest in a cooler for another day so the flour can adhere to the skin. Then it's fried to order in non-GMO expeller pressed oil. The spice blend is proprietary — Jones will only say it's her equivalent to KFC's secret blend.

The result, she promises, is fried chicken with a complexity of flavors.

"When I opened South Street, people were raving about the flavors. It's literally umami, like when you have all these flavors on your palate. It's a well-balanced chicken."

The recipe is based on the fried chicken Mom used to make.

"My mother would make fried chicken for the family once a month," Jones recounts. "She'd fry it in a cast iron pot. I changed her recipe a bit, but she loves my version."

Jones say that monthly meal was a "gift" from her mom to the family. "At my house, we ate mostly vegetables — if we had fried chicken, it was a special occasion."

The inspiration for Chick'N Jones comes from Chicken George, a small restaurant chain that operated in Baltimore in the 1980s. "we would go to KFC or Church's sometimes, but for some reason Chicken George always stood out for me. It was a Black-owned franchise. As I grew older, I learned that there are so many Black entrepreneurs that were able to provide for their families by making chicken. I want to reclaim that. I want to build a legacy for my family."

The chicken at Chick'N Jones is offered either in her traditional flavor, served with pickled vegetables and spicy honey mustard, or a Nashville-inspired, hot honey version that comes with bread and pickles. A four-piece bucket of either costs $17, and a sandwich costs $14.

Jones, who believes in eating healthier, also offers a variety of sides that are, by comparison, "healthier" than the usual mashed potatoes or fries. "You can have your fried chicken and combine it with a kale salad that has roasted crimini mushrooms. It's a nice balance," says the chef. Other sides include grilled green tomatoes and vegan collard greens.

If, on the other hand, you're in the market for indulgence, Jones has you covered, with an order of spiced loaded fries smothered with Cajun spice, jalapeño, sweet onions, and crumbled feta cheese ($12).

Though Chick'N Jones is open till late, Jones says her chicken tends to sell out, especially on weekends.

Her advice: "Try to make it early — it's always a good time for fried chicken."

Chick'N Jones at Time Out Market. 601 Drexel Ave., Miami Beach; 786-753-5388; timeoutmarket.com/miami. Open Wednesday through Thursday from 4 to 10 p.m.; Friday from 4 to 11 p.m.; Saturday from noon to 11 p.m.; and Sunday from noon to 10 p.m.
KEEP MIAMI NEW TIMES FREE... Since we started Miami New Times, it has been defined as the free, independent voice of Miami, and we'd like to keep it that way. With local media under siege, it's more important than ever for us to rally support behind funding our local journalism. You can help by participating in our "I Support" program, allowing us to keep offering readers access to our incisive coverage of local news, food and culture with no paywalls.
Make a one-time donation today for as little as $1.