University of Miami president Julio Frenk attended February's opening of the Center for Global Black Studies on the Coral Gables campus. Photo courtesy of the University of Miami
On February 28, at the close of Black History Month, students, faculty, and staff gathered at the University of Miami’s Cesarano Plaza for a Mardi Gras-like festival to celebrate the debut of the Center for Global Black Studies. Dancers clad in colorful costumes and show-stopping headpieces swayed in sync to the sounds of junkanoo drums and a trombone.

It was a joyful inauguration, with University of Miami president Julio Frenk, provosts Jeffrey Duerk and Donald Spivey in attendance. And a moving one, too. The center has come to represent a long-awaited racial reckoning by the university. Dr. Jafari Allen, one of the center's cofounders and codirectors, had tears in his eyes.

"Black students and Black professors have been asking for something like this for a very long time," explains Nadege Green, the center’s inaugural Community Scholar-in-Residence. "This center means something deep."

With only one semester in the rearview, the center is already serving as a platform for students and the community to address structural racism and inequality, providing opportunities for scholarships, research on Black history, and academic relationships between Black students and professors.

"We had such a great, exciting, and hopeful opening," Dr. Donette Francis, the center’s other cofounder, tells New Times. "It’s about celebrating global Blackness throughout Miami, celebrating diversity to move the needle, amplify, improve, and broaden our community."

In addition to highlighting the work of Black faculty members, the center will broaden its reach by spotlighting the efforts underway at other institutions. It's designed to act as a network that expands beyond the school’s Africana Studies programs, hosting lectures and presentations that can serve to help students with their studies. 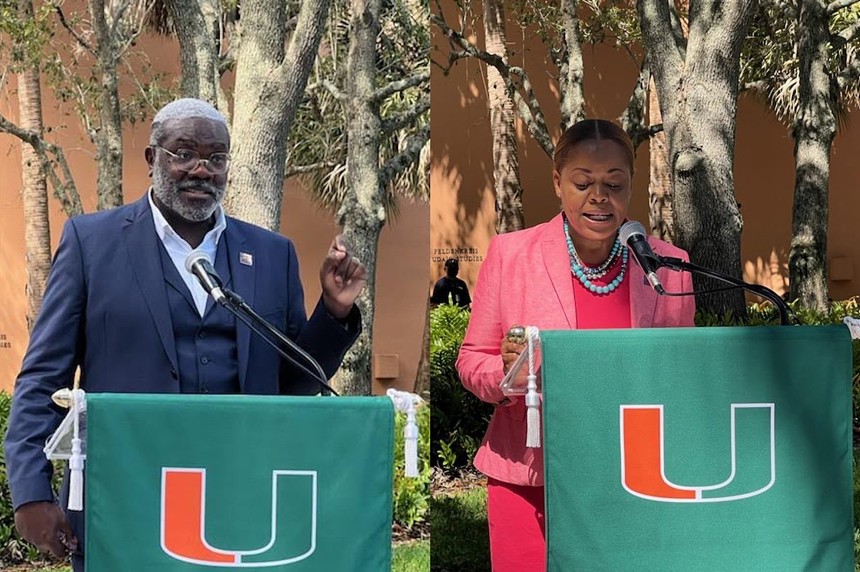 UM's Center for Global Black Studies cofounders Jafari Allen (left) and Donette Francis
Photos courtesy of Nadege Green
The center’s offices are located on the third floor of the Solomon G. Merrick Building, the oldest building on campus. During the Black Lives Matter protests across the nation during the summer of 2020, many called for the removal of Confederate statues, flags, and names of racial segregationists on buildings, and while investigating UM’s race relations, a campus group petitioned for Merrick’s name to be removed from the building after it was brought to light that Solomon G. Merrick worked with government officials to create racially segregated housing in Miami-Dade County and limit the Black community to a certain section of the city in the early 1900s.

Merrick's son George Merrick, widely celebrated as one of the founders of the university and the city of Coral Gables, had a past that was similarly clouded by racism.

"He called for Black people to be removed from city limits," Green says. "That’s why the UM students were protesting — because they know we have to be open and honest with our history, with where we came and where we are today."

The University of Miami, which was founded in 1925, was segregated until 1961. But integration in itself wasn't enough to guarantee equal rights and equal representation.

"In 1968, there was a sit-in at the University of Miami that was led by the United Black Students Association on campus. Their demands were specifically to have more Black professors and more visiting Black scholars on campus," Green recounts. "They wanted UM to have a more broad and friendly and supportive atmosphere."

Solomon G. Merrick's name has not been taken down. But UM has celebrated the naming of the Student Services Building in honor of Harold Long Jr. and H.T. Smith, two Black alumni. Long was one of the United Black Students Association demonstrators, while Smith is a longtime Miami attorney specializing in civil rights.

"The very student who was threatened with arrest and asking for Black teachers and recognition in the curriculum now 40 years later has a building named after him," says Green, referring to Long. "It comes full circle." Students taking classes in Africana Studies in their freshman or sophomore year can now take the Black Miami Studies class, which will teach not just the region’s long and fraught history with race but also the university’s.

"Black Miami Studies is a gateway course where we introduce different lecturers coming in from the medical school, law school, school of education, and from the school of music," Francis explains. "What that class does is give the opportunity to give the chance for students to meet a number of Black faculties from all the various campuses and colleges at the University of Miami."

This fall, Nadege Green will begin teaching the Black Miami course. And Francis and Allen are gearing up to offer internships and opportunities to study abroad, among other academic endeavors.
KEEP MIAMI NEW TIMES FREE... Since we started Miami New Times, it has been defined as the free, independent voice of Miami, and we'd like to keep it that way. With local media under siege, it's more important than ever for us to rally support behind funding our local journalism. You can help by participating in our "I Support" program, allowing us to keep offering readers access to our incisive coverage of local news, food and culture with no paywalls.
Make a one-time donation today for as little as $1.