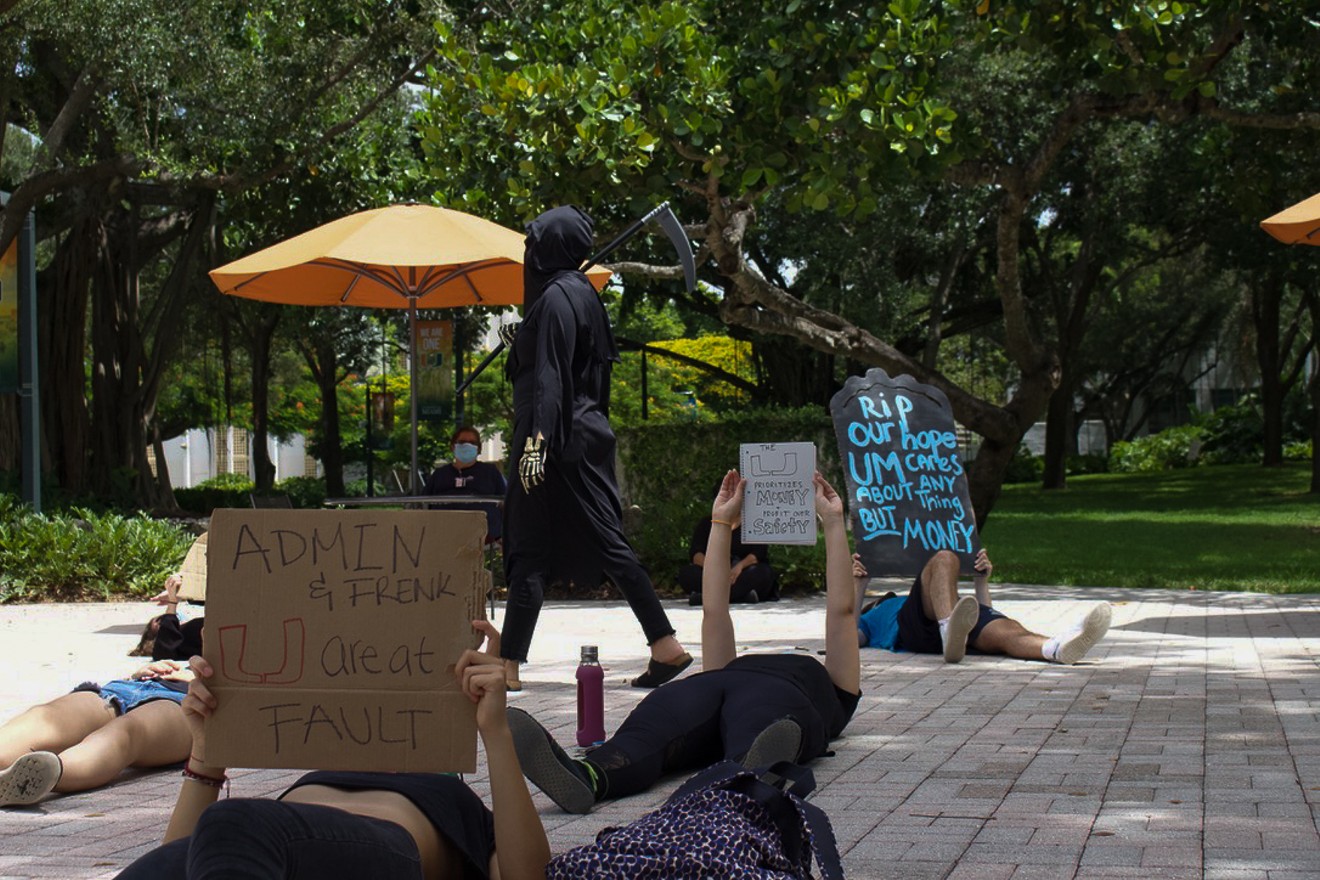 Students and faculty protested conditions at the University of Miami during a September 4 "die-in." Photo by Ally Gaddy/The Miami Hurricane
Since the University of Miami resumed in-person classes in August, the decision to reopen has come under fire. While students had the choice to stay home, faculty and staff were required to return to campus amid the pandemic.

That dichotomy led to demonstrations — on September 4, faculty, students, and subcontracted workers staged a "die-in" to protest what they viewed as a lack of concern for their safety. Demonstrators played dead while holding up signs, including one that said that UM president Julio Frenk was at fault.

Now, information has surfaced showing that the university used video surveillance to track down the protesters and call them to a meeting with administrators a few weeks later. An on-campus advocacy group, the University of Miami Employee Student Alliance, tweeted about the problematic surveillance on Tuesday.

Two weeks after the die-in, Mars Fernandez, a graduate student at UM and one of the participants in the protest, received an email from the office of Ryan Holmes, the university's dean of students.

"Dr. Ryan Holmes is inviting you to a scheduled Zoom meeting to discuss incident [sic] that happened on September 4, 2020 at the Whitten University Center," the message read. (The email was first obtained and reported on by the student newspaper, The Miami Hurricane.)

Fernandez tells New Times that the email went out to her and other students she knows who were at the protest. She says they didn't know why they were being singled out, especially given that they wore masks as a safety precaution.

"It was so easy to feel like you did something wrong and get scared. I'm a graduate student — they could fire me, or not pay my tuition. It totally felt like I was being called to the principal's office," Fernandez says.

At the meeting with Holmes on September 22, students were told that all events, including protests, are supposed to be registered in advance with the university, and that the die-in event was not properly registered.

Holmes tells New Times the purpose of the meeting was to explain to student demonstrators the procedures for registering events so that proper safety precautions can be put in place.

"We called in students who tried to have a demonstration that was not registered. The correct procedure is contacting the Dean of Students Office, letting us know about the event, and working with the Shalala Student Center," Holmes says, adding that no students were disciplined.

Yet students at the meeting, including Fernandez, were confused as to how they were identified and singled out and how their names and emails were determined, given that no one from the university had spoken to them during the protest. When they questioned Holmes, he told them he had asked the University of Miami Police Department (UMPD) for help identifying the students via surveillance footage.

Fernandez says the students were shocked and upset, and that they asked whether police had used facial-recognition technology to identify them.

"I asked for the police department to assist in identifying any students they could. I said I would like to have their names. They use investigative methods, but I'm not privy to the exact methods they used," Holmes tells New Times.

Facial-recognition software and its use by law enforcement have been widely scrutinized in recent months. For starters, critics point out that the technology sometimes fails to provide accurate matches, particularly when it comes to identifying people of color. And facial-recognition software also has trouble recognizing people wearing facemasks. The American Civil Liberties Union has been one of the loudest opponents of the technology, filing lawsuits against multiple law enforcement agencies and lobbying lawmakers to stop the use of surveillance that uses facial recognition.

Nevertheless, police departments across the nation have used the controversial technology to track down and arrest protesters who demonstrated for racial justice over the summer. In Miami, police used facial recognition to arrest a woman they say threw rocks at police with riot shields, according to NBC 6.

University police departments have also come under fire for using facial-recognition technology. Opponents have drawn comparisons to George Orwell's dystopian novel 1984, in which people are constantly monitored by surveillance.

A university spokesperson told New Times via email that the school does not use facial-recognition software. But an October 4 article in the UM student publication Distraction Magazine quotes UMPD Chief David Rivero touting the department's use of the surveillance technology to catch a burglar.

"We were able to [easily] identify and arrest him" through the Florida Department of Law Enforcement's facial-recognition software, Rivero said in the article. "We've [detected] a few bad guys that way."

Rivero's 16-page résumé, available on the UM website, also describes the introduction of a campus-wide CCTV security system as one of his top accomplishments. The document specifically mentions facial recognition.

"One of the largest security project [sic] added during Chief Rivero's tenure was the creation of the new university-wide camera system (CCTV). The system now includes 1,338 cameras, recording 24 hours a day, and featuring video analytics which is the use of sophisticated algorithms applied to a video stream to detect predefined situations and parameters such as motion detection, facial recognition, object detection and much more," Rivero's résumé states.

Overall, Fernandez says, the conversation with Holmes left her feeling unsafe, as if she is constantly under the eye of the university.

"I definitely feel watched, and that makes me feel anxious to know that I'm being watched and my institution uses surveillance as a way to address problems instead of addressing the root cause of those problems," she says.

Fernandez adds that the university has yet to address the actual subject of the protest.
KEEP MIAMI NEW TIMES FREE... Since we started Miami New Times, it has been defined as the free, independent voice of Miami, and we'd like to keep it that way. With local media under siege, it's more important than ever for us to rally support behind funding our local journalism. You can help by participating in our "I Support" program, allowing us to keep offering readers access to our incisive coverage of local news, food and culture with no paywalls.
Make a one-time donation today for as little as $1.