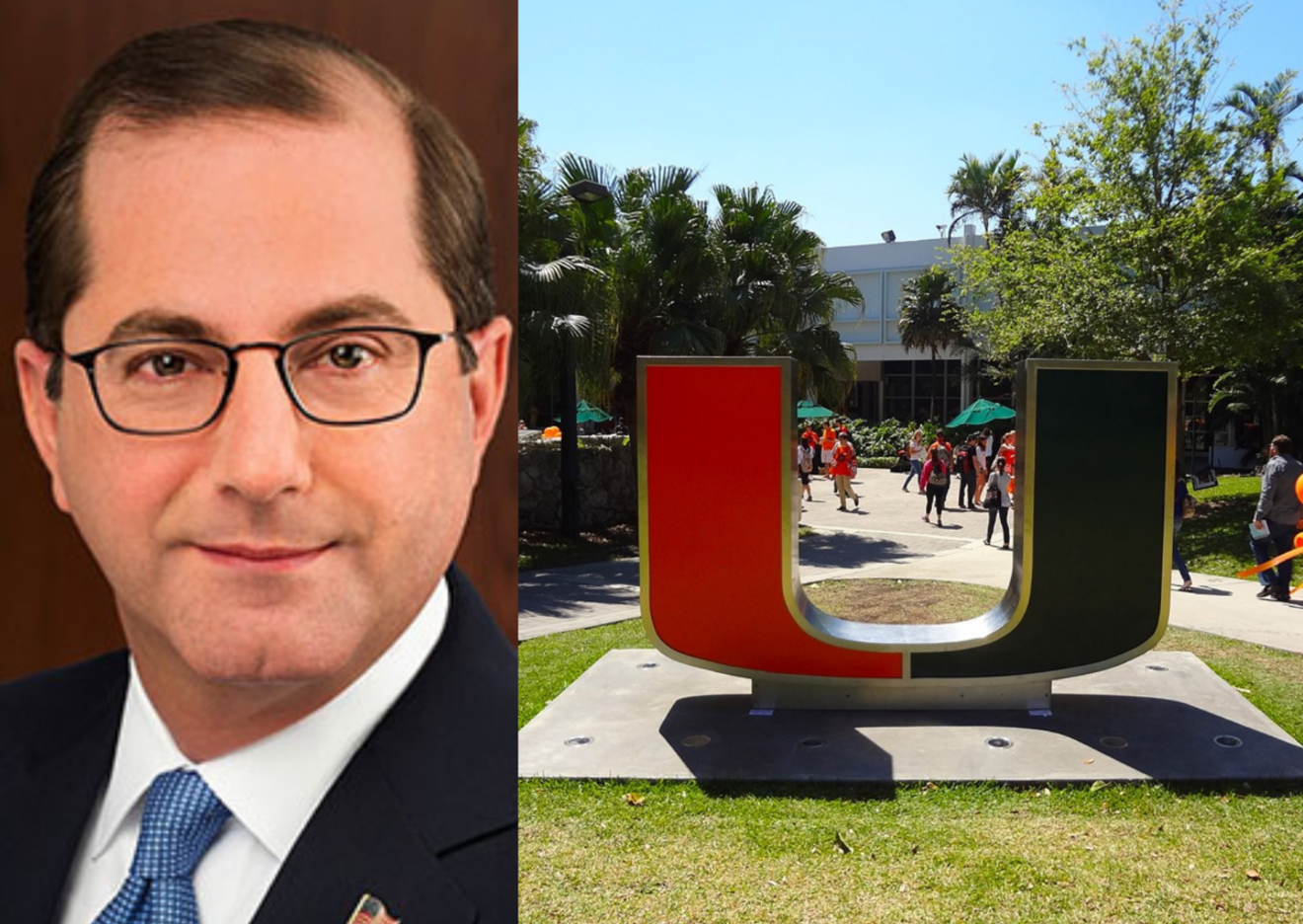 The decision to hire former President Donald Trump's HHS Secretary Alex Azar has incensed faculty, staff, and students. Photos from HIV.gov and by Chad Cooper/Flickr
On its surface, the hiring of a former federal health official would seem like a smart move for the University of Miami. After all, former U.S. Health and Human Services (HHS) Secretary Donna Shalala is already on the faculty; adding another HHS veteran would stand to enhance the private university's stable of high-profile instructors.

But the school's decision to hire former President Donald Trump's HHS Secretary, Alex Azar, has incensed a growing number of faculty, staff, and students who call into question the official's ties to one of the nation's most controversial immigration policies.

"The university hiring this person is quite despicable," says Preston Stone, a Ph.D. student in literary and cultural studies who teaches a literature course on migration and citizenship. "What happened under Trump was a human-rights abuse, and this is a person who does not respect migrants with what he's done with the Trump administration."

UM announced last week that Azar will join the Herbert Business School at its Coral Gables campus as an adjunct professor and senior executive in residence during the fall semester, which begins on August 23. Aside from that initial August 4 press release, a UM spokesperson declined to comment further to New Times about Azar's hiring and the campus outrage and said Azar could not be reached for an interview because he's on vacation.

Azar served as secretary of HHS in the Trump Administration from January 2018 until the inauguration of Joe Biden. His office oversaw part of the federal government's COVID-19 response, including Operation Warp Speed, which sought to expedite vaccine development and manufacturing during the pandemic.

One of Azar's other roles as head of HHS was to oversee facilities, such as the Homestead detention center, where thousands of migrant children were held while separated from their families after they attempted to cross into the U.S. The facility closed in August of 2019 after intense pressure from immigration advocates who decried what they said were prisonlike conditions for children in HHS custody.

Thomas Kennedy, a grad student and activist who worked with several groups to shut down the Homestead detention center, says UM's decision to hire Azar serves as an attempt to whitewash his career history.

"It's the normalization and reinsertion of people who were parts of really horrible systems that caused a lot of pain, suffering, and trauma," Kennedy tells New Times. "These people get to retire, have their names forgotten, and get a nice teaching job at UM."

Faculty, too, have misgivings about Azar's hiring. Scot Evans, an associate professor who is also president of UM's University Employee Alliance, tells New Times the hire flies in the face of the university's espoused values of racial justice, pushed strongly in the wake of social-justice protests last summer.

"You can’t be against anti-Black racism and hire Azar, the guy who was complicit in racist Trump policies, such as family separation, trying to sabotage Affordable Care Act and Medicaid, and botching the response to COVID-19 which disproportionately affected people of color," Evans says.

Other faculty members fear Azar's failure to rebuke Trump for his role in stoking dis- and misinformation about COVID-19 will set a bad example for students.

"To let the former president disparage science and undermine the very work he was doing — he didn’t have the courage to take a position," says Professor Louis Herns Marcelin, director of Global Health Studies at UM. "What are the values to be passed down to these students other than opportunism, cowardice, and an inability to stand?"

Azar publicly stated that he supported reunification for migrant families and wrote an op-ed published in the New York Times after his departure from the White House encouraging Americans to get vaccinated for COVID-19.

In UM's press release about Azar's hire, Shalala, who was president of the university between 2001 and 2015 and remains a trustee professor of political science and health policy at UM, said her perspectives and Azar's would complement each other well, despite working under different political administrations.

"Alex and I share a common understanding of the most important issues facing the healthcare industry and, through our conversations and interactions, have established a dynamic working relationship," Shalala said in the release.
KEEP MIAMI NEW TIMES FREE... Since we started Miami New Times, it has been defined as the free, independent voice of Miami, and we'd like to keep it that way. With local media under siege, it's more important than ever for us to rally support behind funding our local journalism. You can help by participating in our "I Support" program, allowing us to keep offering readers access to our incisive coverage of local news, food and culture with no paywalls.
Make a one-time donation today for as little as $1.