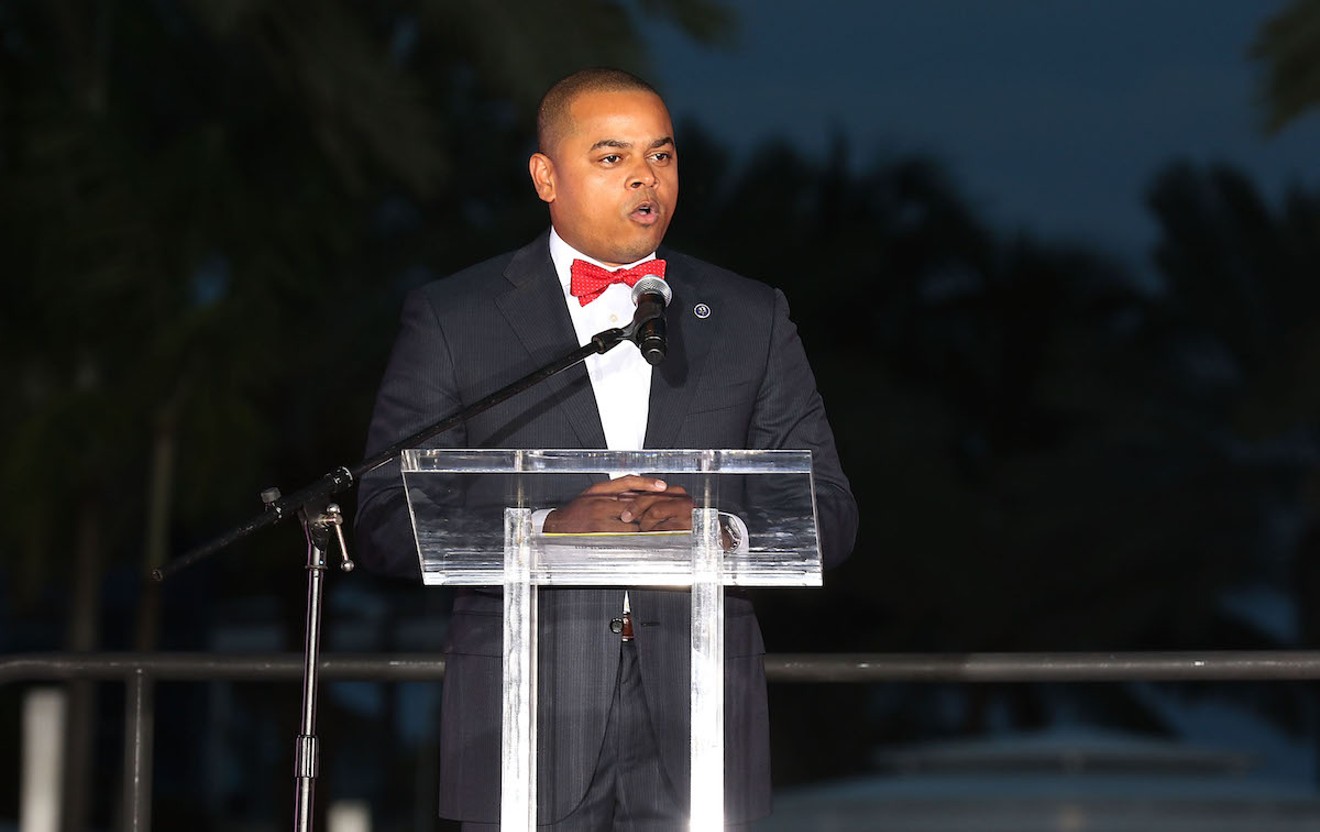 Update, October 23: A response from Gepsie Metellus, who is running against Keon Hardemon in the race for Miami-Dade County commission District 3, has been posted below.

Hardemon's haters enjoy jumping on the young African-American politician for allegedly only looking out for himself and his family. For example, Miami filmmaker and self-anointed government watchdog Billy Corben routinely refers to the 36-year-old City of Miami commissioner as "Pay to Play" Hardemon.

In fact, Hardemon is a law-abiding attorney who is too smart to get caught up in any bullshit. If he was doing anything illegal, Miami-Dade State Attorney Katherine Fernandez Rundle would waste no time charging Hardemon. After all, Rundle doesn't hesitate when it comes to prosecuting Black politicians for petty crimes and misdemeanors.

The local media has tried to tear Hardemon down, but nothing ever sticks. The Miami Herald published hit jobs about disgruntled developers suing the city, alleging the commissioner's uncle and political adviser, Billy Hardemon, was shaking them down — the insinuation being that to get Hardemon's attention, you have to hire his uncle. One of the two lawsuits, filed by the developer R. Donahue Peebles to stop an Overtown project that will bring 1,100 jobs to the neighborhood, has already been partially dismissed.

The Florida Bulldog wrote articles about Hardemon having a conflict of interest because he has awarded no-bid grants to the Martin Luther King Jr. Economic Development Corp., which is chaired by Billy Hardemon, and to the Foundation of Community Assistance and Leadership (FOCAL), where Barbara Hardemon, Billy's wife and the commissioner's aunt, is the executive director.

Both nonprofits provide legitimate services to Miami's neediest residents, such as teaching them financial literacy, assisting them with purchasing new cars for work, feeding and educating children in afterschool programs, and funding trips for inner-city kids to places they otherwise would never get to see. What's more, both organizations have been receiving city funding since Hardemon was a teenager and long before his political aspirations. Every Black city commissioner since Bill Clinton was president has given grants to Martin Luther King Jr. EDC and FOCAL. There is no conflict.

He's just the next Black politician with a big target on his back. Previous relentless attacks ended with one of Hardemon's predecessors, Arthur Teele Jr., killing himself in the lobby of the Miami Herald in 2005. Another former Black city commissioner, Michelle Spence-Jones, fought bogus criminal charges for more than a year starting in 2010. Rundle was forced to drop the case because of a lack of evidence.

Hardemon can't be accused of any crimes because he hasn't committed any. Instead, he's got a long record of accomplishments. He secured $30 million from the developer of the Magic City project in Little Haiti that will be used to build affordable housing and make community improvements in the neighborhood. He convinced world-renowned, award-winning chef Marcus Samuelsson to open a restaurant in Overtown, Miami's oldest historically Black neighborhood that is going through an economic revival. And he made sure that Charles Hadley Park in Liberty City was completely renovated, something we have been waiting 40 years to happen.

It seems like any time a Black politician does business with Black people, they get accused of doing something wrong. But when they're doing business with a Cuban, it's all good.

Miami's Black community loves Hardemon because he has done more during his brief tenure on the city commission than any other Black politician in South Florida. Hardemon delivers for the people and that's why his detractors hate him.


The race to replace term-limited County Commissioner Audrey Edmonson is wide open and the options are drastically different. On one side, there is me – Gepsie Metellus. I am endorsed by County Commissioners Audrey Edmonson, Jean Monestime, Barbara Jordan, and Sally Heyman. Three former District 3 candidates have endorsed me. The Miami Herald has endorsed me. Florida For All, the largest coalition of union and social justice organizations, has endorsed me. On the other side, there is my opponent, Keon Hardemon, who has served as City of Miami Commissioner for seven years.

Any assumption of a favored candidate before the actual election is presumptuous and very disrespectful to the voters. In fact, respect for the residents of District 3 compels us to understand that this election provides them an opportunity to elect someone who can represent an increasingly diverse community with wide-ranging sociological characteristics and political points of view.

Residents of District 3 must elect someone who can comfortably move from one segment of the district to another. The elected commissioner must be a champion for African-Americans, Haitian Americans, Latinx, Anglos, and the millennials who live, work, and play in our uniquely diverse district. The elected commissioner must embrace District 3’s multiculturalism; must work to unify residents around common interests; and must be the district’s champion by leveraging its unique assets while creating an inclusive and equitable district that serves as a beacon of opportunity for all residents. However, the District 3 commissioner must first garner the respect and trust of voters and residents.

My opponent, Keon Hardemon, has none of this despite seven years in elected office. What he does have is a well-known reputation for shady politics that pads the pockets of his family. A simple Google search unveils his storied and troubled history. He is referenced in a nine-figure lawsuit with allegations of corruption with actions to steer real estate projects to developers employing family friends. He overturned a deal negotiated by Little Haiti community leaders so that he could steer the community funds being promised by a developer to a fund he could personally control. All of this has been covered by the press.

One does not acquire respect overnight. Respect is earned through concrete action taken over time, especially when in a position of power. Name and titles do not confer respect. One cannot gain respect by playing dirty games such as spreading lies about a fellow citizen in order to win an election. Likewise, one cannot obtain respect by falsely claiming the endorsement of an elected official or by doctoring photographs to convey a false impression that a respected national leader is supporting one’s candidacy. Respect goes by the wayside when residents feel extorted.

Elected officials are held to a high standard. Respect is earned through actions that honor the trust and power bestowed upon the office. Sadly, for the voters, Hardemon has a well-earned reputation of skirting the lines of questionable actions, ignoring those who do not benefit him and going to great lengths to reward an inner circle of friends and family. I am in the race because our community deserves better. We should not have to question whether our elected representative deserves trust and respect.

The new District 3 commissioner must garner respect in the following ways: by steering clear of appearances of impropriety and nepotism; by being ethical, transparent and accountable; by not selling out constituents; by being accessible and responsive to the residents; by addressing the needs of the poorest and most dilapidated sections of the district; and by expressing outrage at the lack of opportunity in some communities and channeling that outrage into tangible actions to inspire hope in residents who have become immune to the promise of change.

I pledge to be that commissioner for all of District 3. I am endorsed by residents and community, institutional, and elected leaders who respect me and know that I will serve the district with integrity, transparency, and ethical servant-leadership. These individuals know me, believe in me, and trust me to put the people first and to do the right thing for District 3 residents. I, Gepsie M. Metellus, am the champion District 3 needs and deserves.