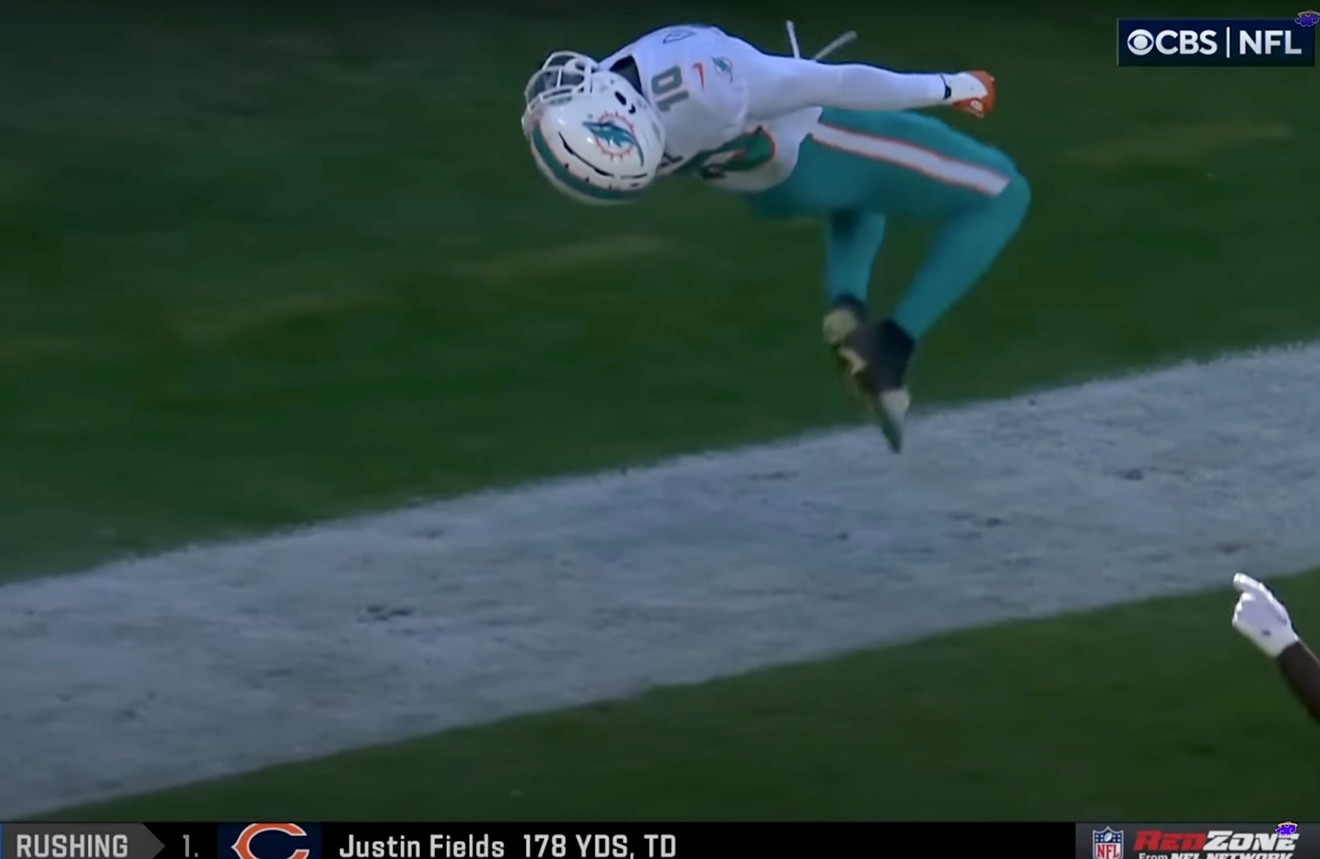 It's flippin' Tyreek! Screenshot via CBS Sports
The Miami Dolphins' 35-32 win over the Chicago Bears on Sunday moved the home team to 6-3 on the season, just a half-game out of first place in the AFC East, and if the season ended today, back in the NFL playoffs for only the second time since 2001.

The thought of cheering on a football team that scores a boatload of points per game actually playing on into the postseason is enough to make Miami fans do backflips — just as Dolphins wide receiver Tyreek Hill did after his touchdown catch in the second quarter of Sunday's win against the Bears.

Hill's performance on Sunday wasn't just about one catch, however. The newly acquired wideout led another Dolphins offensive explosion with seven catches for 143 yards and his backflippin' score. The 143 yards marked the fifth game this season Hill has eclipsed more than 140 receiving yards in a game and puts him at 1,104 total yards on the year, the most in the NFL by far.

Hill's trademark end-zone backflip made for a great GIF, but the celebratory gymnastics also created what has to be the leader in the clubhouse for best photo of the NFL year.

Make it an NFT. Paint it on a wall in Wynwood. Hang it in the Louvre!

If this isn't art, we don't know what is.

The Dolphins didn't walk off the field unscathed. The flip side of a thrilling 35-32 win is the recognition that your defense continues to make life harder than it has to be. Thankfully, Hill and Tua Tagovailoa — who threw another three touchdowns and no interceptions on Sunday — continue to be enough to overcome the Dolphins' weaknesses on the defensive side of the ball.

Up next week for the Dolphins are the Cleveland Browns, as the Fins seek to maintain momentum during rookie head coach Mike McDaniel's first season in Miami.
KEEP MIAMI NEW TIMES FREE... Since we started Miami New Times, it has been defined as the free, independent voice of Miami, and we'd like to keep it that way. With local media under siege, it's more important than ever for us to rally support behind funding our local journalism. You can help by participating in our "I Support" program, allowing us to keep offering readers access to our incisive coverage of local news, food and culture with no paywalls.
Make a one-time donation today for as little as $1.