Three Ways to Make the Rickenbacker Causeway Safer for Cyclists 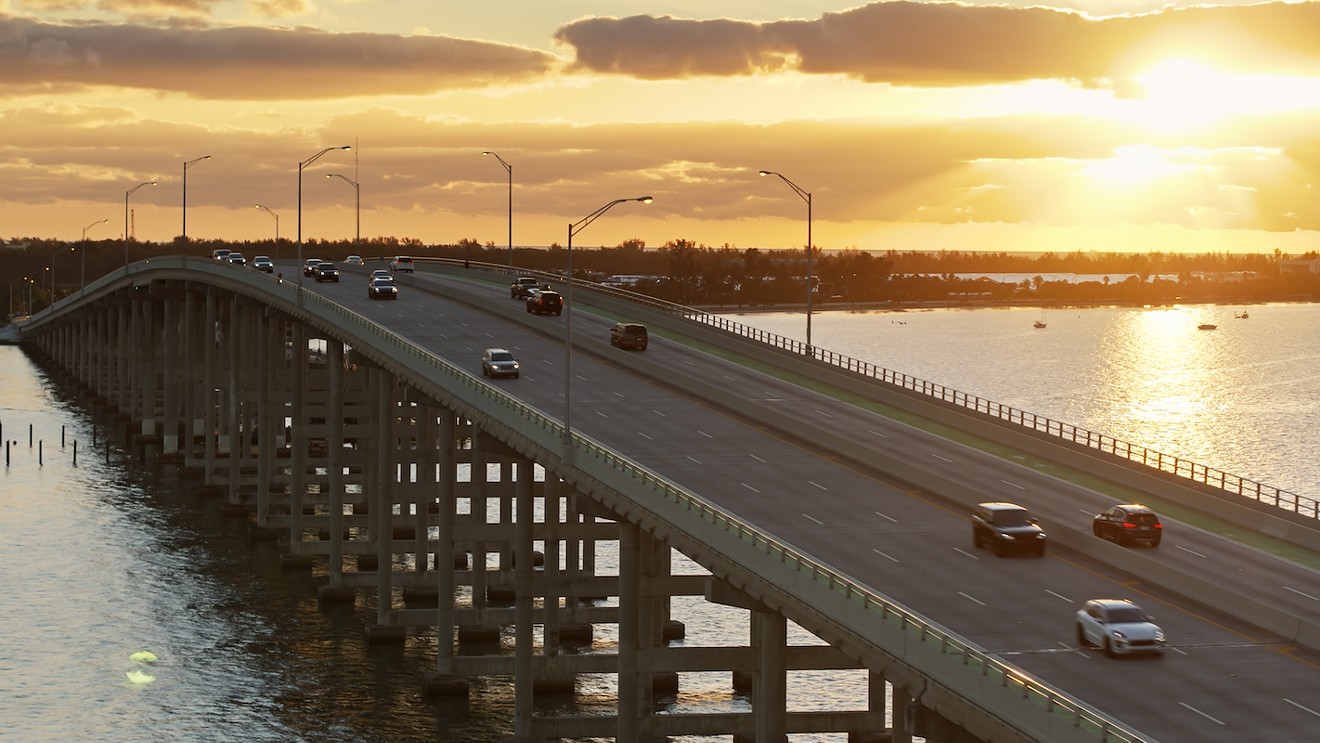 Their deaths add to a grim and growing number of fatal cycling accidents on the five-mile-long, county-run road: At least seven bicyclists, including the two recent victims, have been killed on the Rickenbacker since 2010, according to the Miami Herald.

The driver in the most recent accident wasn't under the influence of alcohol — a fact bike-safety advocates say means flaws in the Rickenbacker Causeway's design are likely to blame. In light of the recent crash, New Times spoke to bike-safety advocate Dr. Mickey Witte, a neuroscientist and adjunct University of Miami professor who shared three suggestions for improvements to make the Rickenbacker safer for cyclists.

THREAD: Many have been rightfully outraged over the latest Rickenbacker tragedy, but not enough has been discussed about the road design where the crash took place.


Get Rid of the "Drop Lane"

Approaching the William M. Powell Bridge en route to Key Biscayne, the Rickenbacker Causeway's rightmost turn-only lane — otherwise known as a "drop lane" — intersects with the green bike-only lane. That's where the most recent fatalities occurred. It's a confusing area: Drivers who intend to cross the bridge may accidentally find themselves in the far-right lane and headed toward the underpass for a mandatory U-turn.

Once drivers realize they're in the wrong lane, Witte explains, they attempt to quickly merge into the lanes heading east toward Key Biscayne. Even if the drivers are going the speed limit (55 mph), the split-second decision to merge left into the center lane can leave them without enough time to properly head-check for pedestrians or cyclists.

"That drop lane is so problematic," she tells New Times. "I mean, anybody with any engineering understanding sees it and goes, 'Well, that's an accident waiting to happen.'"

Plastic "armadillos" have been installed on the Venetian Causeway.
Photo by Michael Majchrowicz

Installing physical barriers in the causeway's most hazardous spots, Witte says, would prevent cyclists and cars from colliding. The barriers would help to ensure that drivers and cyclists stay in their designated lanes, especially if they're distracted or impaired.

"I'm not calling necessarily for continuous separation," Witte says. "But at the very least, we should put the engineers out there to recognize the places where they can have the most immediate impact by way of putting in appropriate separators."

According to a plan made public by Miami-Dade County days after the fatal accident, "vertical barriers" will be installed on stretches of the causeway that have been determined to be the most hazardous.

That said, when "armadillos" were installed on the Venetian Causeway late last year, the plastic bumps were met with resistance from Miami's cycling community. A petition — which has garnered more than 1,600 signatures — was even started to remove them. (Recreational cyclists are less concerned with danger from cars than of what happens when a bike tire happens to come into contact with one of the bumps.)
click to enlarge

After a fatality, small modifications are often implemented. Witte says that while short-term solutions such as installing vertical barriers and removing the drop lane are necessary, so is a comprehensive "master plan" that would address concerns of bike-safety advocates, engineers, cyclists, and officials from Key Biscayne and Miami-Dade County.

Witte believes a long-term plan is key to tackling the Rickenbacker's bike-safety issues. She notes that this idea was echoed by Key Biscayne Mayor Michael Davey during a county commission meeting on May 17, only two days after the accident that killed Reyes and Vera.

"People should not accept that we just have casualties like this," Witte says. "They should actually be driven to investigate what can we do to improve our roadway and minimize the likelihood that someone gets killed out there."
KEEP MIAMI NEW TIMES FREE... Since we started Miami New Times, it has been defined as the free, independent voice of Miami, and we'd like to keep it that way. With local media under siege, it's more important than ever for us to rally support behind funding our local journalism. You can help by participating in our "I Support" program, allowing us to keep offering readers access to our incisive coverage of local news, food and culture with no paywalls.
Make a one-time donation today for as little as $1.