Left: A portrait of L.E. Thomas. Right: Historian Enid Pinkney, who fought to preserve Thomas' legacy. Photo courtesy of the Black Archives History Research Foundation of South Florida, Inc./Photo by Joshua Ceballos
On the southeast side of Overtown, between an empty grass lot and the Metrorail tracks, sits a small, nondescript white building that was nearly forgotten. Graffiti covers its white walls, and tree branches obscure the only evidence of the structure's significance, a name posted on the façade: "Thomas."

"You're saying something when you let it go like this, when the tree is covering the sign so you can't even see his name," 90-year-old Black Miami historian and Overtown native Enid Pinkney tells New Times. "It means that somebody does not care, and they don't respect the history."

Pinkney refers to the fact that this building was once the law office of Lawson E. Thomas, Miami-Dade County's first Black judge and the first Black attorney in Miami to stand before a white judge. In his day, Thomas was a civil-rights activist and a pillar of the community in Overtown, one of Miami's historically Black neighborhoods.

It might be in a sorry state now, but that should soon change: Earlier this month, the City of Miami's Historic and Environmental Preservation Board voted unanimously to designate Thomas' law practice as a historic site, ensuring the preservation of his legacy in the face of gentrification and developer-backed interests in the area.

"We are working overall on more historic designations in Overtown. So much of the historic fabric there has been lost, but there are several remaining buildings that help tell the story of the neighborhood, and this was one of those," says Christine Rupp, executive director of the Dade Heritage Trust, which petitioned for the structure's historic designation. 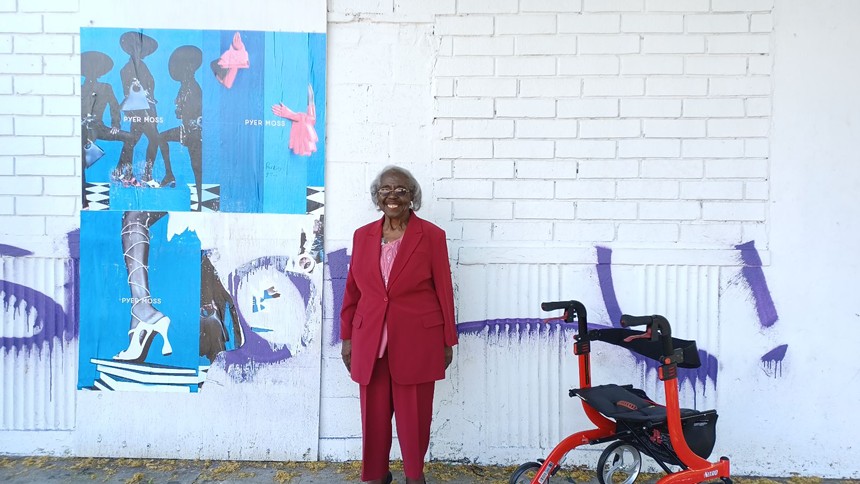 Enid Pinkney
Photo by Joshua Ceballos
Thomas began practicing in 1937, when Miami was still mostly segregated, and a bailiff once threatened to "throw [him] out a sixth-floor window." Thomas worked to advance civil rights with strategic planning. Pinkney says Thomas worked with activist groups like the Congress of Racial Equality to organize sit-ins at segregated lunch counters and strategized ways to protest peacefully.

In the 1940s, publicly owned beaches in Miami-Dade were reserved for white residents. Thomas wanted to change that.

"In Miami, Black people had to go up to Broward County when they wanted to go to the beach," Pinkney says. "[Thomas] felt that that was wrong because Black property owners were paying taxes."

So in May of 1945, Thomas staged what he called a "wade-in" at Haulover Beach. Six Black Miamians walked into the water as Thomas waited in the sand with $500 in his pocket to cover his companions' bail. Though he fully expected they'd be carted off to jail, city leaders got word of the protest and agreed to meet. Within a few months, Virginia Key Beach was designated for Black people.

"The result of that [protest] was giving Black people Virginia Key Beach as a segregated beach. It had a sign in front of it that said "Colored Only," but back then that was an accomplishment," Pinkney explains. "We were happy to have a beach here in Miami that we could go to."

Pinkney met Thomas as a girl when he was her family's attorney and the lawyer for her father's church in Ojus, a now-defunct municipality west of present-day Aventura. Pinkney describes him as a serious and austere man, but one who was warm and cared deeply about Overtown.

As a judge, she says, Thomas presided over cases involving Black defendants in Miami's Black police precinct and always sought to help defendants — not simply to penalize them.

Now that his onetime office has been recognized as a historic site, Pinkney hopes the city will revitalize the building and continue to tell Lawson E. Thomas' story so future generations might appreciate his considerable contribution to South Florida's civil-rights movement.

"I am elated that this building has been given local, historic designation for its preservation because we're losing our history, and we're not passing the history on to future generations," she says. "When I look around and see all of the expressways and high-rises and all of the plans that they have, there's no respect for what was here."
KEEP MIAMI NEW TIMES FREE... Since we started Miami New Times, it has been defined as the free, independent voice of Miami, and we'd like to keep it that way. With local media under siege, it's more important than ever for us to rally support behind funding our local journalism. You can help by participating in our "I Support" program, allowing us to keep offering readers access to our incisive coverage of local news, food and culture with no paywalls.
Make a one-time donation today for as little as $1.