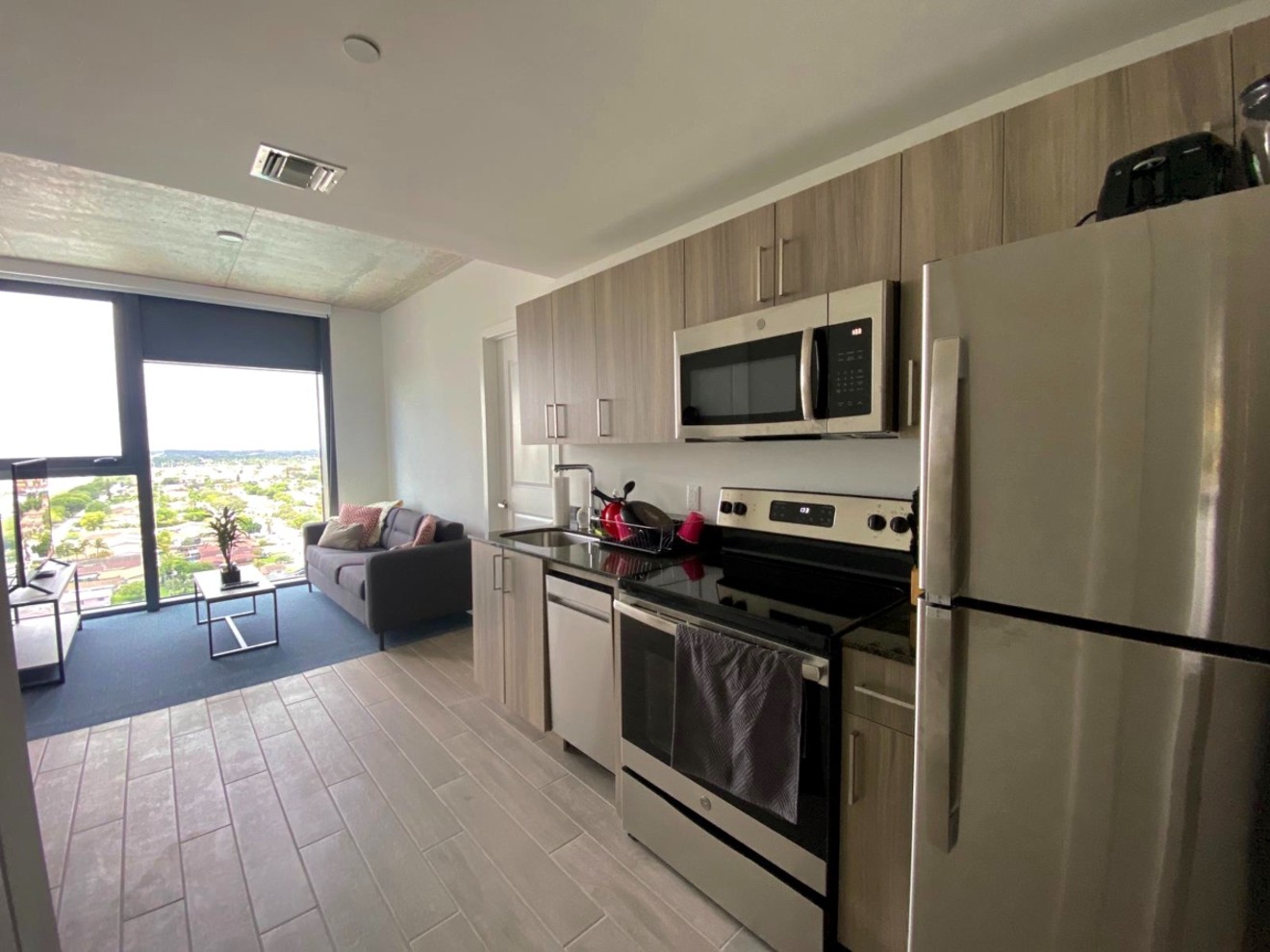 A promotional photo from The One at University City shows a model two-bedroom unit. Photo courtesy of Global City Development
Emma Haynes-Ocana, a psychology student at Florida International University, has spent the past month back at home in Pennsylvania. After a difficult couple of weeks living at the university's newest off-campus housing option, The One at University City, she decided to move home and leave her apartment in Miami behind.

When she walked into her brand-new furnished unit in August, she noticed it was missing a dining table and chairs. The ceiling wasn't painted, and the walls still had markings left from construction. Parts of the bathroom had urine stains. She assumed that workers must have used it during construction and failed to clean it up.

Haynes-Ocana also says she failed an exam because of the building's poor internet connection. (She says the professor gave her a second chance after hearing from multiple students and faculty members that it was a common issue.)

"I was under the impression it was gonna be a nice apartment," Haynes-Ocana tells New Times. "Honestly, I regret moving to The One. It's not as advertised."

Billed as luxury student housing — with rent between $1,000 and $1,300 a month for a room in a shared apartment — the 886-unit building has seen a shaky first few months of occupancy.

Residents arrived with construction still underway on several floors. Many rooms had holes in the ceiling. The elevator was filled with dust, and many hallways and floors bore residue from the ongoing construction.

Some tenants say the rooms were unfinished, while others complain that their doors or windows don't shut properly. Accessories like microwaves and vanity mirrors were not working or were missing entirely. Several Google reviews contain complaints from residents who say their rooms came with garbage left by construction workers, including empty boxes of pizza and food left under the furniture.

Frustrations have mounted as students deal with unstable internet connections and broken air conditioners. But when they have attempted to get in contact with management, they say, they've been met with contempt.

"When people try to contact The One, they don't help. They ignore the comments on Instagram and they don't help when you call them. It's very frustrating," Haynes-Ocana says.

With their phone calls sent to voicemail and their emails unanswered, students have resorted to other methods to share their concerns.

Beginning in August, an anonymous Instagram account called @thetruth_behindtheone began posting images of unfinished ceilings, unpainted walls, and other problems in the building. One post shows a gaping hole in the ceiling of an apartment. Another shows a kitchen with a missing drawer and a laundry closet with a missing door.

"Reminds me of fyre festival," one person commented.

This girl’s door doesn’t work and her door won’t close. This is extremely dangerous what if someone just comes and enters your apartment?

The university has also helped promote the apartments. Last year, The One set up a promotional stand inside FIU's student union, the Graham Center, where students could get more information, interact with representatives, and sign a lease.

Brian Pearl, one of the building's main developers, says the building opened two weeks earlier than anticipated to accommodate students whose leases from other FIU residential properties ended on July 31. As a result, the building was not prepared to be fully operational from the beginning. He says many of the issues were expected and that having so many people moving in at once was anticipated to cause some problems.

But overall, Pearl isn't worried about the state of the building.

"There are always transitioning issues," he tells New Times. "It's been fine and according to our plan."

Pearl says residents need to have patience while the problems get sorted out.

"Wherever you go into a facility that is brand-new and never been used, the plus side is that it is much nicer," he says. "The downside is that things might not be working and need to be fixed."

But residents say they don't have much patience left.

Tenant Caleigh Griffin says that "people are very frustrated paying high rent and losing amenities" like a reliable internet connection and air conditioning. In addition, she says, she was promised a $1,250 Visa gift card when she signed her lease but has yet to receive it.

Griffin says she had a broken window in her apartment for a month and a half, and it was only fixed when she threatened to sue the building and withhold her rent. When workers did arrive to fix it, she says, they knocked and entered without any notice.

That has been a common complaint among residents, who say workers have come into their rooms without notice, sometimes catching them not fully dressed.

Pearl says the management team at The One is committed to addressing the issues and improving service, but that students will not be able to get out of their leases.

"I'm not minimizing any frustrations that people may feel. Inevitably, there are going to be some issues," he says. "What we need to do is make sure to improve everyday customer service and that people feel like they are being heard."

He believes any outstanding issues will be quickly and completely resolved.

Haynes-Ocana says she'll be getting in touch with a lawyer. She does not plan on returning anytime soon.

"The situation at The One is so bad that, even though I have to pay rent, I had to move because the quality is so poor," she says.
KEEP MIAMI NEW TIMES FREE... Since we started Miami New Times, it has been defined as the free, independent voice of Miami, and we'd like to keep it that way. With local media under siege, it's more important than ever for us to rally support behind funding our local journalism. You can help by participating in our "I Support" program, allowing us to keep offering readers access to our incisive coverage of local news, food and culture with no paywalls.
Make a one-time donation today for as little as $1.