Developers and Preservationists Square Off Over Capone Mansion 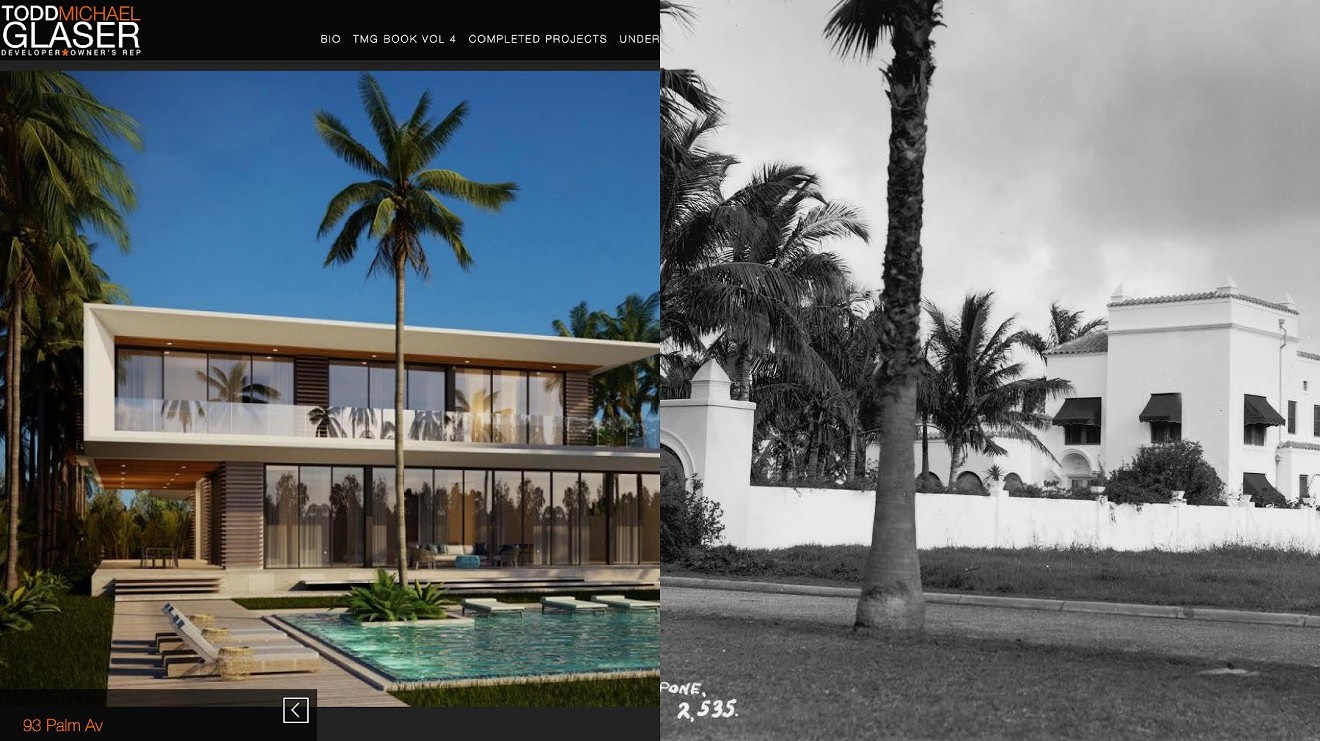 93 Palm Ave.: future renderings, and in 1938 Screenshot via ToddMichaelGlaser.com, Photo by Fox Photos/Getty

One of Miami Beach's most notorious properties is slated for demolition, and historic preservationists are racing to save 93 Palm Ave. from a bulldozer.

The $15 million, 30,000-square-foot property, which includes a guest house, pool house, and nine-bedroom, six-plus bathroom mansion was once the oceanside estate of Chicago mob boss Al Capone, the FBI's first-ever Public Enemy No. 1. But last week the Miami Herald reported that developer Todd Michael Glaser wants to raze the property to make room for an even statelier manse worth three times more.

Now the stage is set for a potentially drawn-out showdown between local preservationists who want to designate the home as a historical landmark and leave it be and a developer who wants to do away with it.

An online petition circulating to preserve the property had accumulated 450 signatures as of Thursday morning.

"Miami Beach risks losing an important part of not just our local history, but of U.S. history if this demolition is allowed to proceed," the petition states. "The loss of this landmark structure and its replacement with a new oversized home will have a long-term negative impact on the community."

"These demolitions need to STOP," a woman named Julie Isaacson commented on the petition. "Not only do they destroy our history and the character of our neighborhoods, they are terrible for our very fragile environment."

Al Capone's Palm Island home in 1938
Photo by Fox Photos/Getty
Daniel Ciraldo, executive director of the Miami Design Preservation League, says the group is mounting an argument ahead of the Miami Beach Historic Preservation Board's next monthly meeting, scheduled for September 13, at which the property’s future will be discussed.

"It’s not just the Al Capone story this island is telling. It’s telling of the pioneering spirit of the early developers and the citizens of this town,” Ciraldo tells New Times. "So I think the big question now for the community is: Do we just want this story to just be in a book on a shelf, or do we want to preserve this living, breathing structure that connects us to so many parts of our history?"

Developer Todd Michael Glaser tells New Times he doesn’t buy that area residents are clamoring for the mansion to be saved and that the process would be more trouble than it’s worth, citing conversations he says he’s had with neighboring property owners.

"Neighbors are all freaking out it’s going to turn into a tourist attraction,” he says. “How could [the city] even think about giving any kind of recognition to a place like this when they’re trying to dig themselves out of a hole?" he added, pointing to the recent spate of gun violence that jolted the city of Miami Beach this summer.

Renderings for 93 Palm Ave.
Screenshot via ToddMichaelGlaser.com, Photo by Fox Photos/Getty Images
The Palm Island property was built in 1922 by architect W.F. Brown for realtor Clarence M. Busch, who helped develop the manmade Palm and Hibiscus islands off the Macarthur Causeway. In 1928, Al Capone purchased the property in his wife's name for $40,000 because it "reminded him of the sunny shores of Italy."

Capone was incarcerated between 1931 and 1939 after his conviction on tax-evasion charges. He commissioned the construction of a gatehouse, which is set over one of the entrances and the garage. In 1947, Capone died of a heart attack at the residence, which is believed to have stemmed from complications of a years-long syphilis infection.

The property boasts a wide veranda, open archways, a 30-by-60-foot swimming pool, a black-and-gold art deco powder room, 1920s ceiling lights, a fireplace, and a pond with a little garden bridge, grotto, lighthouse, and waterfall, all made of red coral.

The poolhouse photographed in 2015
Photo by Joe Raedle/Getty Images
But for Al Capone's granddaughter, Diane Capone, it’s the smell of gardenias that transport her back to South Florida’s most infamous home.

The moment she catches a sweet trace of the flowers, it’s the late 1940s and she’s once again surrounded by the tubs of gardenias her grandmother planted around the estate on Biscayne Bay where she and her sisters splashed in the pool and enjoyed meals on the porch whenever the summer heat allowed.

In an interview with New Times, Diane Capone says she and her family — despite an initial feeling of loss — are at peace with whatever fate has in store for her grandparents’ former home, which their grandmother sold in 1952 and which has since changed hands multiple times. The house has been fully renovated and remodeled.

Regardless of the outcome, Diane Capone says Palm Island will always carry with it the Capone family's history — the good as well as the bad.

"That beautiful place, that paradise, will always be there in my heart," Capone says. "That fragrance of a gardenia transports me instantly back to that setting, and that's not going to go away even if there's a different house there."
KEEP MIAMI NEW TIMES FREE... Since we started Miami New Times, it has been defined as the free, independent voice of Miami, and we'd like to keep it that way. With local media under siege, it's more important than ever for us to rally support behind funding our local journalism. You can help by participating in our "I Support" program, allowing us to keep offering readers access to our incisive coverage of local news, food and culture with no paywalls.
Make a one-time donation today for as little as $1.