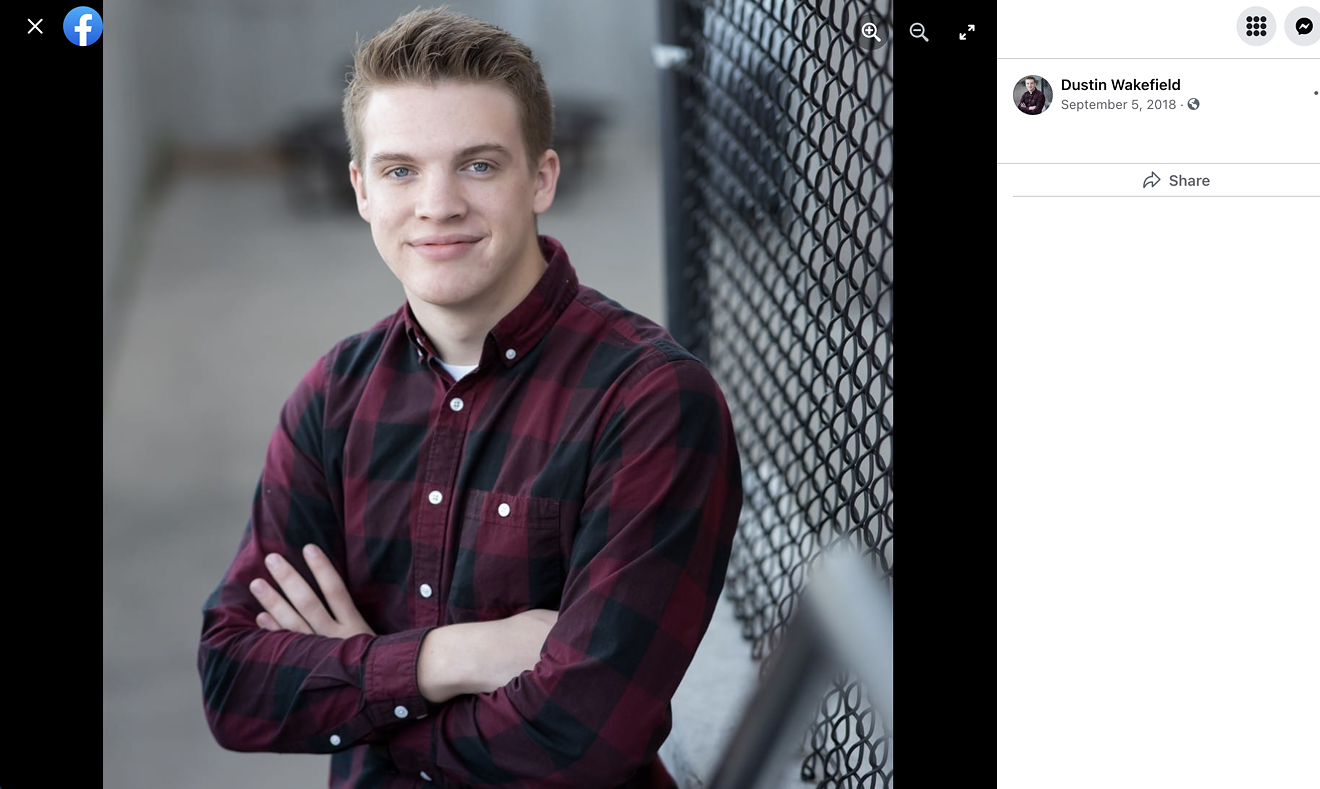 The Facebook profile belonging to Dustin Wakefield, the 21-year-old Colorado man who was killed in a random attack on Ocean Drive Tuesday night. Screenshot via Facebook
Miami Beach leaders and residents are renewing calls to crack down on violent crime in the area after a 21-year-old tourist from Colorado was shot and killed in a random, broad-daylight attack on Ocean Drive.

It's the latest in a series of senseless murders in South Beach over the past year — including 24-year-old Christine Englehardt and 27-year-old Suwaye Amadou — that has rattled residents and business owners alike.

According to an MBPD arrest report, Dustin Wakefield was dining with his infant son and family on the outdoor patio of La Cerveceria de Barrio restaurant Tuesday evening when 22-year-old Tamarius Davis, from Georgia, randomly walked up and shot him dead. Davis later confessed to gunning down the young father while he was high on mushrooms that "made him feel empowered."

A video posted on Twitter by WSVN reporter Sheldon Fox shows Davis appearing to dance outside the Ocean Drive restaurant following the shooting. Loud screaming can be heard in the background.


Chilling: This shows an armed man dancing just after the murder victim was shot at La Ceveceria restaurant on Ocean Dr. @wsvn pic.twitter.com/w4fuEMr46F

During spring break, Miami Beach police and residents are used to more traffic and an uptick in drunken debauchery there — but not random murders like this year: On March 8, 27-year-old resident Suwaye Amadou was shot near Sixth Street and Collins Avenue and later found dead from an apparent gunshot wound less than a mile away on Pine Tree Drive. A week later, a 24-year-old tourist from Pennsylvania, Christine Englehardt, was drugged and raped by two men before being left to die in a South Beach hotel.

Following those deaths, Miami Beach Police Chief Richard Clements promised to ramp up police presence in the area to quell violent crime. WSVN reported that in the days following the murders, officers seized 78 firearms and made more than 900 arrests, a third of them for felonies, and that half of those arrested were from out of town.

But Miami Beach resident Nick D'Annunzio couldn't shake the feeling that it wasn't enough. Fearing that another tragic incident would take place, the founding partner of the public relations firm Tara Ink had organized a vigil for Englehardt back in March, hoping her tragic story would spur change on Miami Beach's famed strip.

“It’s another needless loss in our city," D'Annunzio says of Wakefield's murder. "And it goes back to what's been going on in the Art Deco District of late and its need for reform."

As D'Annunzio sees it, the problem stems in part from the overwhelming number of bars and restaurants in the area. He believes the city should pull back several cabaret licenses so the crowds on Ocean Drive don't overflow into the streets.

He says the violent incidents are causing tourists and visitors from the Greater Miami area to stay away.

"No one is going right now because of the lawlessness," D'Annunzio says. "People just don't even come into it anymore. And that's really disturbing."

For the past few years, city officials have brainstormed ways to reimagine the mixed-use district. In late March, after the spring break murders, Mayor Dan Gelber announced a 12-point plan to transform the Entertainment District into something called the Art Deco Cultural District. The plan included banning alcohol sales past 2 a.m. and stricter noise ordinances. The city commission approved the plan in May, but the initiative was overturned after attorneys representing the Clevelander nightclub filed suit and Miami-Dade Circuit Court Judge Beatrice Butchko ruled that the city commission's ordinance was improperly enacted.

After Wakefield's murder, Gelber echoed sentiments similar to D'Annunzio's to Local10, adding that the killing was another sign that South Beach's Entertainment District needs to be "dismantled."

Gelber said he doesn't believe the problem will be solved by policing.

"Our city can no longer sustain an entertainment district," Gelber told the news station. "It just attracts too many people, too many looking to act out, to fight, or buy drugs."

D'Annunzio has no immediate plans for another vigil. But he has resolved to work with city commissioners, as well as and commission candidates like Kristen Rosen Gonzalez and Fabian Basabe, to raise awareness and find a way to support Wakefield's family in the coming days and weeks.

Basabe, who is vying to replace Micky Steinberg in the Group 1 commission race in November, believes that Miami Beach – and the entertainment district in particular – has slowly been succumbing to criminal beahvior since the early 2000s.

He says he's shocked about the latest shooting, but not entirely surprised.

"Anyone that takes a turn against a child is batshit crazy," Basabe said in a statement to New Times, referring to reports that Wakefield died protecting his year-old son. "Drugs can clearly amplify this, not simply cause it."

Basabe says his campaign platform calls for aggressively supporting new mental-health programs and overhauling the current zoning regulations. He says it makes sense for local businesses to have a "quality versus quantity" clientele.

"Anyone who dares politicize my statement, I gladly invite them to come with me to Colorado so that together we can face Dustin [Wakefield]'s family and explain to them how their delicate sensibility and poorly based electoral judgment has made this most unspeakable act possible," Basabe said.

"We need to act on the ground, and we need to act quickly and with the full power of our police force," added Basabe, a registered Republican. (The commission seat is nonpartisan.)

While the murders are generating national headlines, according to data from MBPD, the homicide rate in Miami Beach has not seen a significant rise: There were six homicides in 2019, five in 2020, and four so far this year.
KEEP MIAMI NEW TIMES FREE... Since we started Miami New Times, it has been defined as the free, independent voice of Miami, and we'd like to keep it that way. With local media under siege, it's more important than ever for us to rally support behind funding our local journalism. You can help by participating in our "I Support" program, allowing us to keep offering readers access to our incisive coverage of local news, food and culture with no paywalls.
Make a one-time donation today for as little as $1.