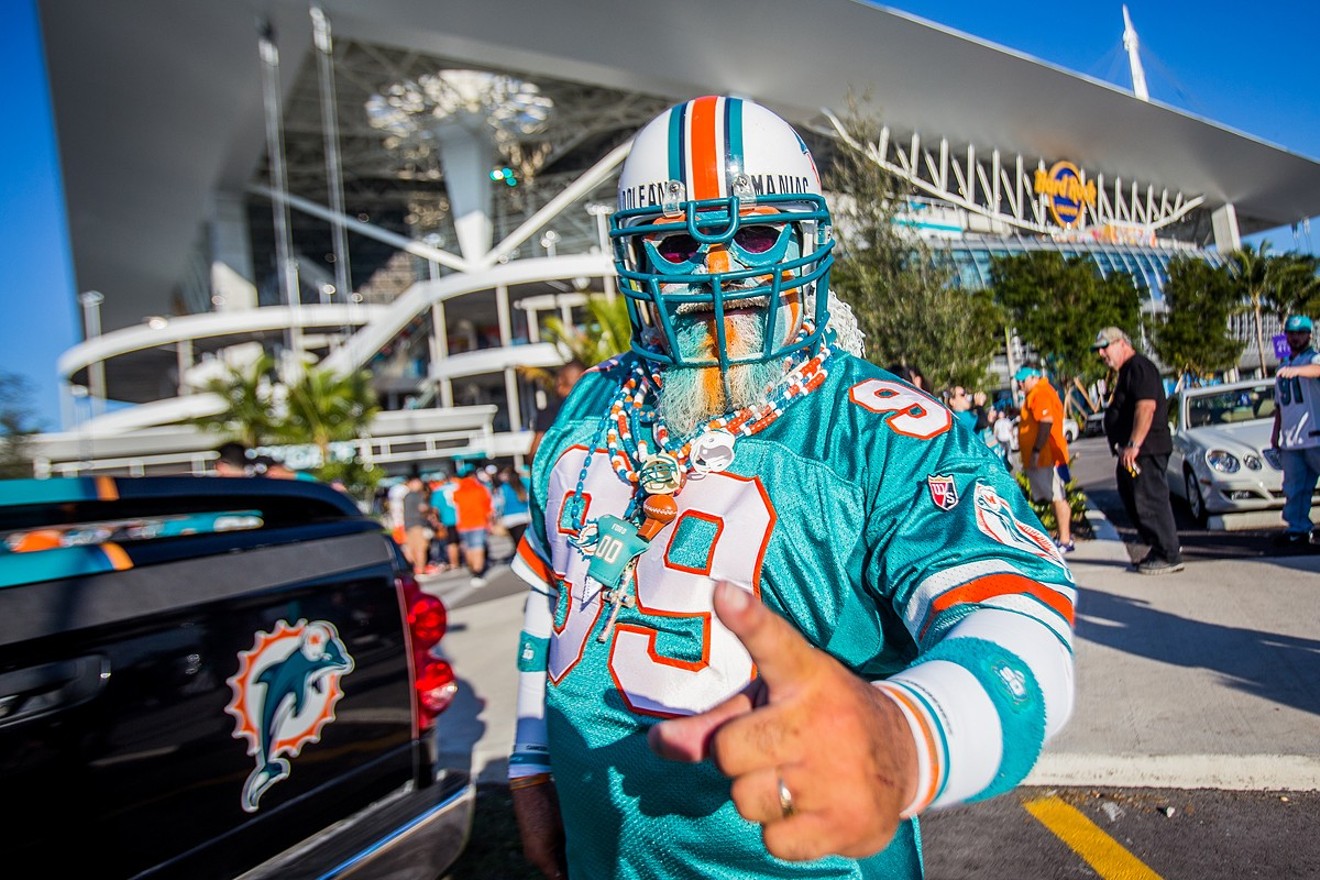 Are you a member of the Fitzmagic Fan Club? Photo by Ian Witlen
For sports fans, the past year will forever be remembered as being extremely online. It's been one full year since the U.S. recorded its first case of COVID-19. The resulting lockdowns and precautions have made social distancing a thing, which by nature, have made crowded sporting events not a thing.

Because so few of us have been able to attend games together and in person lately, more than ever Miami sports fans have flocked to places like Twitter to experience their teams together, while apart.

Everyone is online now, and the market is flooded with sports takes.

The result of Miami fans watching games online together has been predictably chaotic. You get a bit of everything.

Here are ten Miami sports fans you'll find on Twitter these days. You know them all, and you're probably a mixture of many.

That guy who tweets about international soccer. For most of us, getting to know Inter Miami and what MLS is all about fills our soccer room to the ceiling. For others, tweeting about soccer at odd times, like 6 a.m. on a Saturday, is the level they're on. It's like thinking you can hold your liquor and then seeing a guy on TikTok taking ten shots before snorting wasabi.

There are some Miami soccer fans who root their hardest for men we've never heard of, wearing kits we've never seen. It's not a bad thing — it's just impressive they have that much room in their brain for sports.


I WOULD DIE FOR TUA TAGOVAILOA. THANK YOU FOR COMING TO MY TUA TALK.


I’m sorry but Tua should not start over Fitzpatrick at all. Fitzpatrick had more passing yards on less completions in 1 quarter than Tua had in 3...

The Fitzmagic Fan Club. Just as there are Tua bros, there are Fitzmagic fans who have been brainwashed into believing that Ryan Fitzpatrick, a 38-year-old quarterback who has never led a team to a playoff win in his career, is somehow a better investment of time than letting Tua play and grow on the field.

It's maddening, really. It's like losing someone to Q.


The biggest underdogs.
From a team that barely should've made it to the Playoffs at the beginning of the season to making the finals.
Swept Pacers. Took out the league best team, Bucks in 5. Beat Celtics in 6. Took Lakers to 6 in the Finals.#HEATCulture #HeatNation #NBAFinals https://t.co/im3vWRMbor

Card-carrying members of #HeatCulture Twitter. The Miami Heat gave its fans the greatest gift during the peak of COVID quarantine: an incredible run to the NBA Finals. If you weren't a believer in Miami Heat culture before last season, you've been radicalized online since. If going from the worst odds to win an NBA title before the season to pushing LeBron James and the Lakers to six games in the NBA Finals didn't prove that Heat culture is a thing to you, nothing will.

#HeatTwitter is proud, loud, obnoxious, and, most of all, hilarious. These Miami fans exist all over, everywhere. Probably even on Gab or whatever other weird app you're not on.


MHB pregame show is going live in 8 minutes with @gnavas103 and @AlexMusibay taking you into tonight's Heat-Raptors game! Come celebrate Tyler's birthday (even though he is out tonight) #DripDrop https://t.co/mVXlfRNV4R

The podcast fan. Not that there's anything wrong with it, but it seems as if the pandemic and being locked indoors more often has naturally led to a saturation of the Miami sports and blog market. Miami Heat Beat and Five Reasons Sports lead the way when it comes to the Miami Heat podcast scene, but there's a podcast for every finger on both hands for every team in Miami these days.

The "grinding the film" Miami fan. Back in the day, before DVR and the internet, few fans gave a shit about breaking down the film as a scout or coach might do before a big game. These days, and especially during a pandemic, more and more fans want to know what they're watching and why the thing they're watching is happening. At a time when it seems like everyone has grown dumber as the years pass, it's actually a welcome revelation.

Miami Heat coach Erik Spoelstra started with the team in the film room 30 years ago. He needed multiple VCRs back then. Now, thanks to the internet, it's much easier to watch that stuff, and more Miami sports fans are taking advantage of it.

Everyone wants people fired. Manny Diaz, his staff, Sebastian the Ibis — everyone. Until, that is, recruiting starts up again. Then the hope comes back around. This leads us to our next extremely online Miami fan.


Everyday this off-season, Miami has been making me proud. Next year then Hurricanes are gonna be scaryyyyy pic.twitter.com/AeudwCs2ao

Every year, it's the same cycle. One day it will make sense.

Florida Panthers Twitter. Much like the Miami sports fans who tweet about Turkish soccer in the middle of the night, Florida Panthers fans are a rare breed we respect but haven't quite dedicated ourselves to becoming, as of yet.

Much of it could be a big inside joke on us. It may as well all be in German because we have no idea what it means. We'll take their word for it.
KEEP MIAMI NEW TIMES FREE... Since we started Miami New Times, it has been defined as the free, independent voice of Miami, and we'd like to keep it that way. With local media under siege, it's more important than ever for us to rally support behind funding our local journalism. You can help by participating in our "I Support" program, allowing us to keep offering readers access to our incisive coverage of local news, food and culture with no paywalls.
Make a one-time donation today for as little as $1.