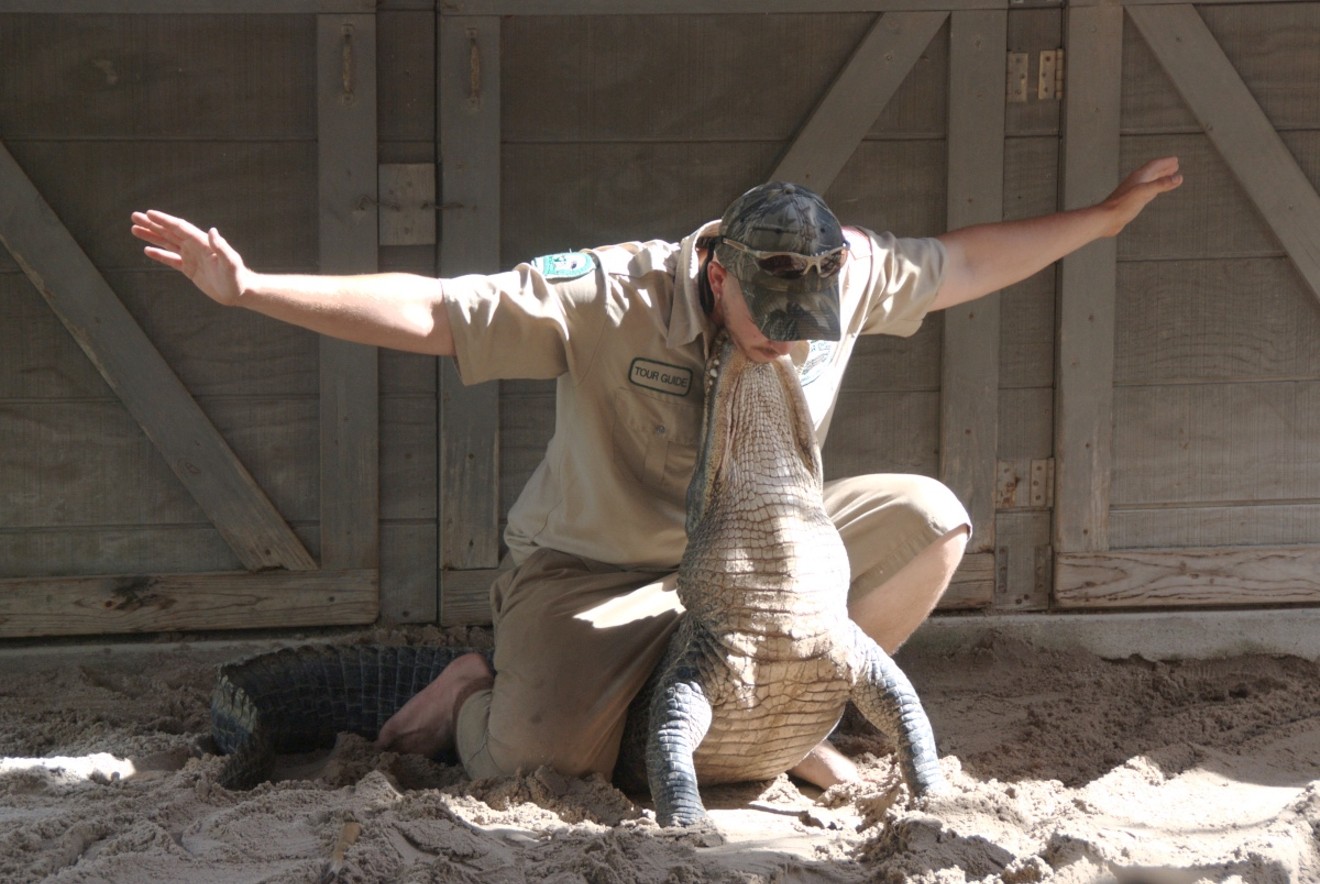 An alligator wrestler does a so-called "bulldogging" trick, pinning the gator's mouth with his chin. Photo by Kacka a Ondra/Flickr
Alligator wrestling has been a part of life in Florida for generations. Members of the Seminole Tribe have long hunted gators for their meat and hides, and starting in the early 1900s, some visitors even paid to watch tribal members capture the reptiles.

But today's commercialized version of alligator wrestling bears little resemblance to the native practice. In a new study published this month in the open-access journal PLOS ONE, researchers at New York University argue that the kind of sideshow alligator wrestling seen at tourist venues across Florida promotes the idea that humans are superior to animals, while actively causing stress and harm to the gators.

"By glorifying the subjugation of alligators, these venues propagate traditional notions of humankind's dominion over the environment and our right to interfere with the lives of wild animals who live in our surroundings, regardless of the threats we pose to individual animals and the environment in the process," the researchers write.

To conduct the study, the authors — Casey Riordan, Jennifer Jacquet, and Becca Franks — reviewed 94 YouTube videos of alligator wrestling at Florida venues, including Everglades Holiday Park in Fort Lauderdale, the Everglades Alligator Farm in Homestead, and Gatorland in Orlando. The research team took note of a variety of behaviors by both the alligators and the wrestlers.

While some of the stunts were the type of thing you might expect from an alligator-wrestling show — for example, 30 percent of the wrestlers stuck their hand in the gator's mouth, and 5 percent put their head in — some performances included moves that seem downright cruel. Some wrestlers dragged the alligators with nooses, poked them in the eye, or taped the gators' mouths shut. And the vast majority of the performances reviewed — 96 percent — showed the alligators being physically restrained by their human handlers.

According to the authors, that's important because previous studies have found that physically restraining an alligator causes more stress to the animal than using a stun gun would. When gators are physically restrained for two to fifteen minutes, their blood stress levels can stay elevated for up to eight hours.

Another part of the study focused on the fact that many venues that stage alligator-wrestling shows bill themselves as conservation nonprofits while appearing to do little to promote the conservation of alligators. While the researchers note that about half of the videos referenced environmental conservation and awareness, they "question whether the act of wrestling animals in itself is the most effective way to promote positive and humane relationships between people and the environment." The authors point out that one popular Florida tourist attraction, the St. Augustine Alligator Farm, promotes conservation efforts without offering alligator wrestling performances.

The NYU researchers say further study is needed — they claim just two prior studies focused on the modern alligator-wrestling industry — but their review suggests Florida might be better off without the wrestling shows.

"In this study, we found that alligator wrestling attractions may be causing systemic welfare harms to the alligators involved with few, if any, environmental conservation payoffs," they conclude.
KEEP MIAMI NEW TIMES FREE... Since we started Miami New Times, it has been defined as the free, independent voice of Miami, and we'd like to keep it that way. With local media under siege, it's more important than ever for us to rally support behind funding our local journalism. You can help by participating in our "I Support" program, allowing us to keep offering readers access to our incisive coverage of local news, food and culture with no paywalls.
Make a one-time donation today for as little as $1.