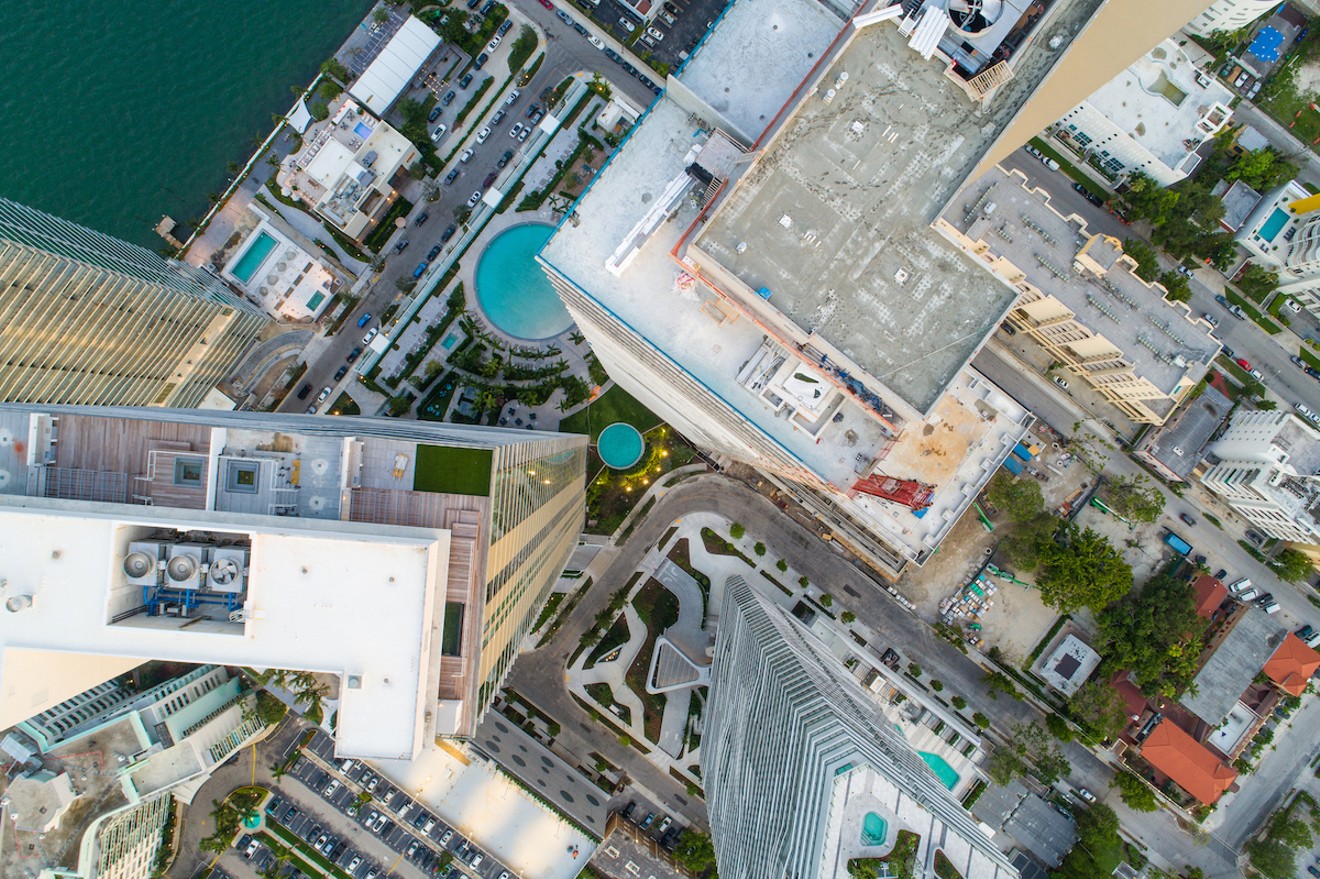 Miami doesn't need more multimillion-dollar condos. Photo by felixmizioznikov / iStock.com
The City of Miami last week tentatively approved rules that would force real-estate developers in a sliver of downtown to carve out portions of any new buildings for affordable or workforce-specific apartments and condos. That's a big deal. Housing-rights activists have been fighting for stricter affordable-housing laws in Miami for years — a similar, countywide plan in 2016 was killed after scores of developers spoke out against it.

But Miami Commissioner Ken Russell has (for now, at least) persuaded his colleagues to force developers in the small, downtown region zoned T6-24B (near the Adrienne Arsht Center, club district, and Overtown) to designate some units in every new building as either workforce housing (for people making up to 140 percent of the area's median income) or affordable housing for low-income tenants. In exchange, developers get to build larger projects than previously allowed. The project will likely pave the way for similar rules citywide. Here's a primer on the data that suggests Miami needs more regulations like this one:

1. Miamians pay the highest share of their incomes toward rent:

Miamians adore Moonlight, the Barry Jenkins-directed paean to growing up poor, black, and gay in the Liberty City projects, because it truly gets Miami. Take a scene near the end, when the main character, Chiron, drives his long-lost love interest, Kevin, down Biscayne Boulevard and Kevin mentions he doesn't have a car. Chiron is aghast — life without a car in Miami must be hell, he opines.

It's clear to any Miamian why he can't afford a ride, though: Kevin works at a diner, has a kid, and pays rent. Of course money is tight.

New data from the U.S. Census Bureau back that feeling. The recently released figures show that Miamians spend a larger percentage of their income on rent than residents of any other U.S. city. That list includes famously expensive cities such as New York, Seattle, Los Angeles, and San Francisco.

On Saturday, the Census Bureau and U.S. Department of Housing and Urban Development released their regular American Housing Survey, which tracked housing affordability trends in the nation's 25 largest metropolitan areas. According to that data, Miamians spend 27 percent of their income on rent, a percentage that tops every other major metro in the United States.

The data show that Miami, more than any city in the nation, is suffering from a one-two punch: Rents keep on rising, but jobs that pay living wages have remained scarce.

For example: It costs more to live in San Francisco than it does Miami. But San Franciscans are, on average, less rent-burdened than Miamians. They're spending only 24 percent of their income on rent despite living in an objectively more expensive city.


2. Miami is regularly rated the worst city in America to rent an apartment:

Affordability is the most pressing political issue in Miami. City and county officials continue approving luxury-rental complexes in the Magic City despite a leviathan of data telling them to stop because they're actively contributing to a housing crisis.

Now, yet another study confirms every 99-percenter's experience with Miami's apartment-rental market: It sucks eggs. Today, Forbes released its comprehensive rankings on which cities are the best for renters — and Miami came in dead last.

According to Forbes (and roughly a million smaller studies that have been released elsewhere in recent years), rent is rising while vacancies have become extremely scarce — which means renters who want to move are trapped, looking at a handful of apartments they increasingly can't afford.

Making the crisis worse, Forbes found that Miami's median income ($45,738, according to the magazine) was the lowest of any city surveyed. In fact, no other major metro area on Forbes' 46-city list had a median income below $50,000.

Thus, Forbes has ceremoniously named Miami the "Worst City for Renters in 2017." Even the magazine seemed incredulous — Forbes even mentioned in its headline that Miami surprisingly topped Manhattan and San Francisco in terms of rental accessibility. But such is the state in which Miami finds itself.

A Miami Herald series earlier this year showed that Miami Beach's luxury hotels — built for real-estate magnates, international billionaires, pro athletes, and reality stars — are staffed by low-earning housekeepers who can't afford rent on the Beach and are forced to spend hours riding buses every day. The state minimum wage, capped at $8.15 per hour, has not kept up with the city's luxury-level rents, and living a humane distance from work is virtually impossible.

In 2011, Miami Beach passed a comprehensive plan that set targets to build housing for the poor by 2020. The city was supposed to build a whopping 16,000 affordable-housing units on the barrier island in nine years. But given how expensive land in Miami Beach has become and that the deadline is now less than three years away, it's clear the city won't meet that goal. In the six years since passing the plan, the city has not come close to hitting its benchmarks. Rents have instead ballooned.

So in response, the city will vote today on whether to kick the can down the road another ten years and aim to build fewer units in that timeframe: only 6,800 by 2030. City documents don't say how many of the originally targeted 16,000 apartments have been built. But in exchange for taking an extra ten years to complete a watered-down version of its affordable-housing plan, the city wants to pass extra zoning incentives to try to entice developers to build apartment complexes for low- and middle-income people.

"Due to limitations in floor area and the high cost of land, the city feels that the 6,800 number can be achieved with the proposed modifications to the Comprehensive Plan and Land Development Regulations," reads the proposed ordinance, sponsored by Commissioner John Elizabeth Alemán.

But given how those same incentives have worked in other cities, lower- and middle-class Beach residents likely won't feel much optimism. The Miami Herald noted in March that the Florida Legislature has squandered $1.3 billion in state housing funds on small, unrelated purchases since the Great Recession, a figure that ought to give everyone who pays rent in Miami a migraine.


4. Even renters with roommates struggle in Miami:

There are lots of reasons to tread carefully when finding a roommate in Miami. If you're not in a relationship, your choices basically boil down to a high-school friend you will grow to hate, a coworker you already see way too much of, some predatory old dude essentially looking for a live-in college-age prostitute, or an uptight neat freak who will flip out if you don't use a coaster on her very expensive West Elm coffee table. Worst case, you end up with a creepy rando from Craigslist who actually tries to murder you.

After all of that trauma, it turns out that roommate still won't even make your rent affordable. New data from real-estate site Trulia show Miami is the only major American city where renters with roommates still get squeezed.

In each of the other 24 rental markets examined by Trulia, including New York and San Francisco, residents who shack up with roommates can get their rent down to an affordable level of less than 30 percent of their income. Miami is the sole exception: In the 305, even those who share a two-bedroom apartment end up spending about 32 percent of their income to put a roof overhead.

Think you can come out ahead by moving into a three-bedroom with two roommates? Haha, good one! That'll save you only 72 bucks a month, and you'll still be sending 30 percent of your paycheck to your landlord every month.

5. In the meantime, Miami (as of March) had a ridiculous backlog of million-dollar-plus condos for sale:

By nearly every metric, Miami-Dade County is one of the most difficult places to live if you don't make a ton of money. The county's median income is a staggeringly low $44,000, compared to the $80,000 median income in a comparably expensive city such as Seattle. That means Miamians wind up spending a higher percentage of their incomes on rent than residents of any other city in America.

What have Miami-area officials done to help the working poor? They've encouraged developers to overbuild so many luxury condos for millionaires that it will now take years to sell them all, according to new research from local real-estate analyst Peter Zalewski.

Zalewski's CraneSpotters.com reported at the end of February that it will take 49 months (just over four years) to sell all the luxury condos developers have built across town. As of February 27, there were 2,767 luxury-grade condos up for sale across the county — despite the fact that ultrawealthy buyers bought only 684 of those units (57 per month) in 2017. A luxury condo in this instance costs a minimum of $1 million. (There were, in total, 14,452 condo units for sale across the county as of a month ago — an oversupply of about 16 months.)

The problem is especially bad in some of Miami-Dade's fanciest zip codes. Earlier this month, Zalewski noted that Miami Beach, Bal Harbour, and Sunny Isles Beach each have a four-year backlog. Downtown Miami has a whopping 6.5-year backlog.

The analyst notes that those numbers will likely seem low in a few years because there are still a gigantic number of condo towers still under construction across Miami-Dade.

"It is worth noting this report only tracks those South Florida condos that are formally listed for sale," Zalewski wrote two days ago. "The report does not factor in the nearly 47,450 new condo units currently in the development pipeline east of Interstate 95 in the tri-county South Florida region."