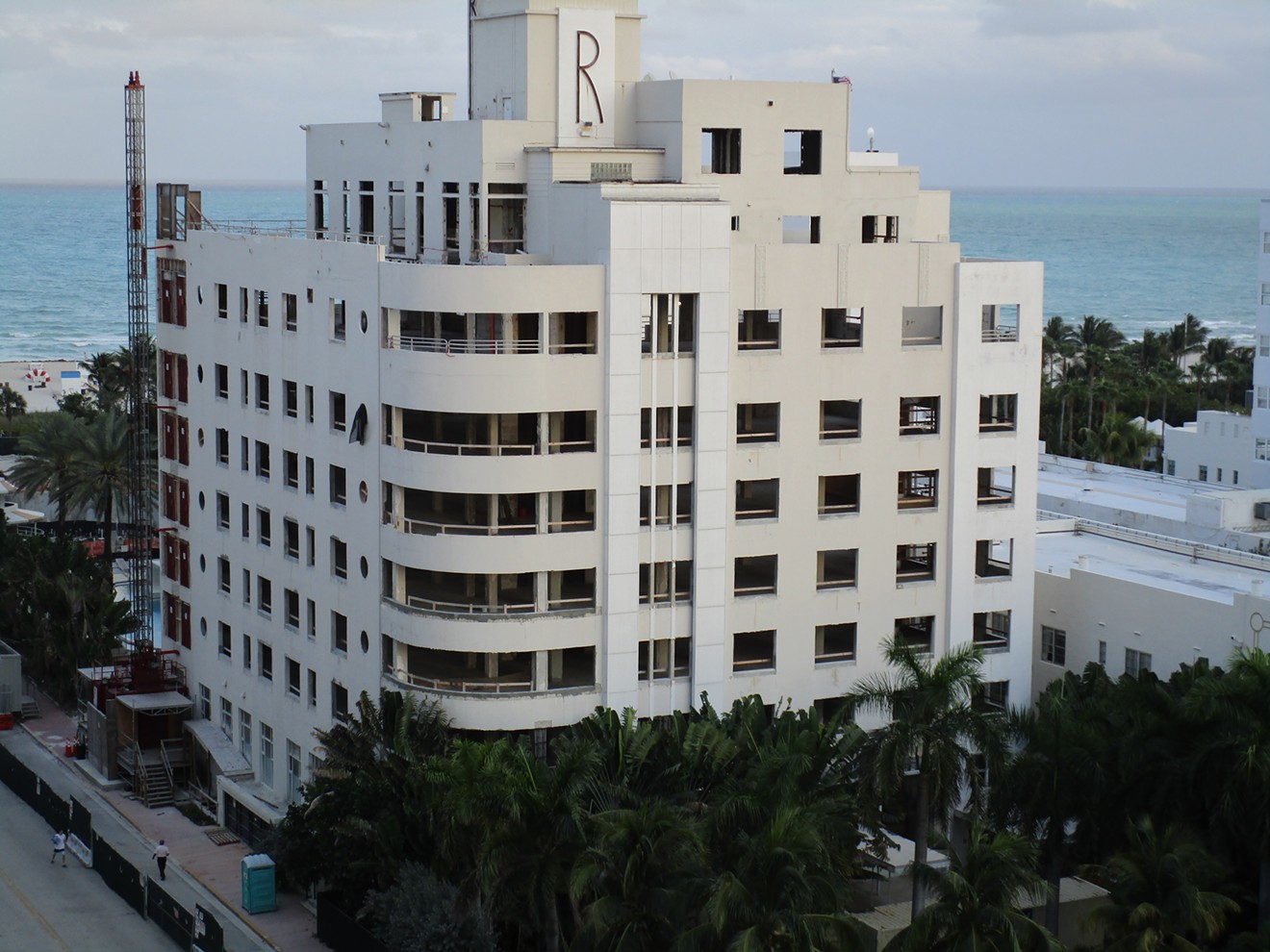 The Raleigh Reader-submitted photo
The Raleigh Hotel has a storied history in Miami Beach. Designed and built by architect L. Murray Dixon in the early 1940s, it has long been a hot spot for Hollywood celebrities and the fashion industry — the pool was made famous by movie star and professional swimmer Esther Williams. In more recent years, models like Miranda Kerr and Marissa Miller have stayed at the art deco hotel, adding to its glamorous mystique.

Since Hurricane Irma hit Florida in September 2017, the property has been closed for a massive renovation. But with the windows and doors ripped out during construction, neighbors tell New Times they're concerned rain and humidity could damage the building. Daniel Ciraldo, executive director of the Miami Design Preservation League, also expressed worry over the property's condition.

"Obviously, it’s concerning any time we see a historic building that is left open to the elements, especially something on the beachfront and a landmark as iconic as the Raleigh Hotel," he says. "Our hope is that as they continue [with the renovations], the building will get better protected, because right now it is kind of exposed." As part of a massive renovation, all windows have been torn out of the Raleigh.
Reader-submitted photo
Construction stalled in recent months after a new owner acquired the hotel. Back in 2014, a group led by designer Tommy Hilfiger bought the property and announced plans to renovate it the following year. Then, while the remodeling work was underway this past February, Hilfiger sold the Raleigh to Michael Shvo. The designer said the New York real-estate developer made "an offer we just could not refuse."

Since then, Miami Beach's building department has been back and forth with the new owners over proper permits for the construction. A notice of violation was issued May 3 because the new contractor had yet to obtain a permit and final inspections, according to building director Ana Salgueiro. Nick D’Annunzio, a spokesman for Shvo's group, tells New Times the new owners met with building officials earlier this week to resolve the issue.

Now, Shvo and his partners say they want to build the Raleigh into a larger hotel complex. Shortly after acquiring the property, the group purchased the neighboring Richmond and South Seas hotels. Shvo has since asked the city for an amendment to its development regulations that would allow him to build a 200-foot-tall residential tower at the rear of the Richmond and South Seas properties. He envisions all three properties unified as a single luxury hotel and residential complex.

According to D'Annunzio, crews resumed concrete work on the Raleigh last week and the project is still on target to reopen in 2021.
KEEP MIAMI NEW TIMES FREE... Since we started Miami New Times, it has been defined as the free, independent voice of Miami, and we'd like to keep it that way. With local media under siege, it's more important than ever for us to rally support behind funding our local journalism. You can help by participating in our "I Support" program, allowing us to keep offering readers access to our incisive coverage of local news, food and culture with no paywalls.
Make a one-time donation today for as little as $1.