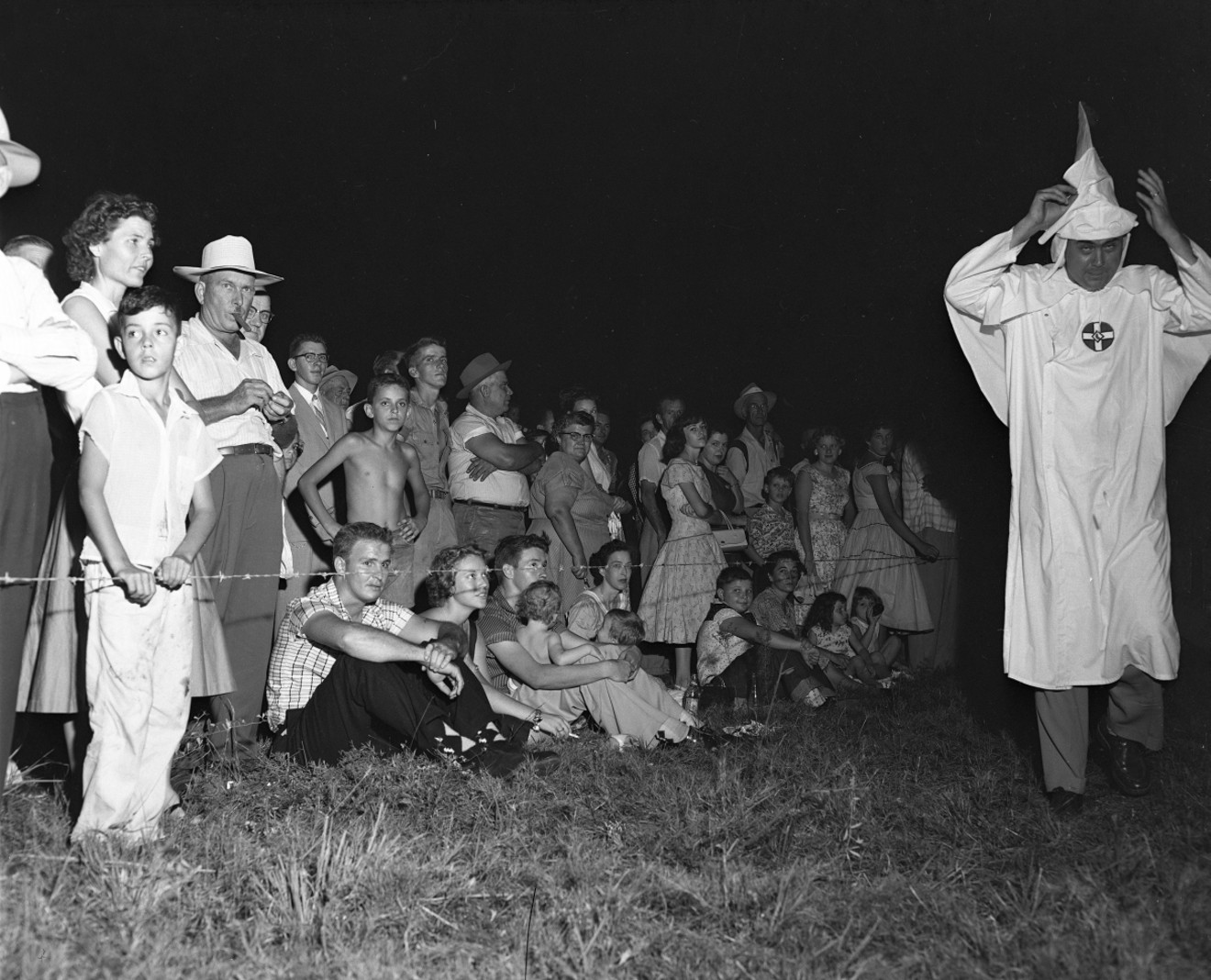 A Ku Klux Klan rally in Florida in 1956. See more photos of Florida's black history here. Photo by Red (Benjamin L.) Kerce / State Archives of Florida
This week, Florida Gov. Ron DeSantis signed a state budget bill that includes a scholarship program for descendants of the victims of one of Florida's bloodiest incidents of racial violence.

The scholarship is a rare instance of reparations for wrongs committed against African-Americans in the U.S. The Randolph Bracy Ocoee Scholarship Program — named for the item's sponsor, state Sen. Randolph Bracy — will award 50 college scholarships of up to $6,100 for students whose ancestors were victims of the 1920 Ocoee Massacre, an Election Day bloodbath that targeted Black voters in the Central Florida city.

The bill DeSantis signed makes no explicit mention of the term reparations — an intentional omission on the part of its sponsor to help it pass through the Florida Legislature.

Other Black students in Ocoee will also be eligible for the funds. The scholarship will be a $305,000 recurring appropriation from the state's general fund and will be available "indefinitely," according to Bracy.

In the days leading up to November 2, 1920, Ku Klux Klan members marched through Black neighborhoods in Ocoee, threatening Black residents not to vote. In defiance of the threats, Mose Norman, a Black Ocoee resident, made multiple attempts to reach the ballot box, but each time he was turned away by white poll workers.

After the polls closed, a mob of deputized white men carrying guns came in search of Norman, who was thought to have taken refuge in the home of his friend, Julius "July" Perry. Norman wasn't there, but Perry fought back, engaging in a gunfight with members of the mob. Perry was captured and taken to an Orange County jail, where he was later kidnapped, lynched, and left bullet-ridden and hanging outside the home of a federal judge who had advised him on voting rights.

After the gunfight with Perry, the mob turned its attention to the rest of the community, burning down Black-owned homes and churches. Many Black residents fled, and Ocoee became a "sundown town," a place where African-Americans were warned to leave by nightfall for their own safety. The total number of Black residents who died in the rampage is unknown, but the death toll is estimated to be between 30 and 60 people.

A historical mapping project from the Orange County Regional History Center shows that in the months and years following the 1920 massacre, land owned by Black residents was sold to white residents at a fraction of its value, including 25 acres of land owned by Perry before his death.

An investigation by WFTV revealed that Perry's land was wrongfully taken from his family and that the land deed was amended years after his death to prohibit it from being sold to another Black person.

For Bracy, the Ocoee scholarship is a first step at righting past wrongs perpetrated against the Black population in Ocoee by white residents and sanctioned by the local government that deputized them and allowed the land theft.

A previous bill introduced by Bracy in 2019 sought to award descendants of the massacre victims reparation payments of up to $150,000 each. But that bill did not move forward, and Bracy decided to morph the effort into a scholarship provision in the state's budget appropriation bill and avoid using the word "reparations" to get it passed, though he says that's what the scholarship is.

The concept of reparations for African-Americans is often politically contentious, and Bracy says he had to be creative in order to get any semblance of compensation for the residents of Ocoee.

"People find reparations controversial. That goes for people in the public and members of the legislature," Bracy tells New Times. "They do not want to vote on that bill that includes reparations, so I thought it was the smoothest way to get it done."

Reparations have been a hot-button topic for years, most recently during the 2020 presidential campaign, but the definition of the term often differs depending on who you ask.

In the U.S., many consider reparations to be some form of monetary benefit for the Black descendants of slaves as a means of compensation for the injustices done to their ancestors.

Others take a broader view of reparations, extending the concept to include all people of color harmed by the lasting effects of slavery and systemic racism, including Jim Crow policies and housing inequality caused by segregation and redlining by the U.S. government, in which the Federal Housing Administration refused to insure mortgages near African-American neighborhoods.

The National Coalition of Blacks for Reparations in America (N'COBRA) defines reparations as "a process of repairing, healing and restoring a people injured because of their group identity and in violation of their fundamental human rights by governments, corporations, institutions and families." N'COBRA names cash payments, land, economic development, scholarships, and community development as examples of reparations.

Bracy takes a similarly broad view of reparations, defining them as compensation for past wrongs, particularly with regard to injustices against people of color perpetrated by or sanctioned by government institutions.

"I think particularly when you're talking about government involvement or the government turning a blind eye when they're supposed to be there to serve the people — when you have instances of violence where people are not protected by the government, that is a situation where reparations is owed," Bracy says.

While the notion of reparations has gained some support in recent years, people on both sides of the political aisle oppose reparations for various reasons. Some believe no amount of money can repay the wrongdoings done to African-Americans throughout the nation's history, while others believe present-day citizens shouldn't have to pay for the sins of their ancestors.

Those in support of reparations see them as a means of leveling a playing field that has long disadvantaged African-Americans in the U.S. Others see them as a way of coming to grips with the nation's sordid racial history in order to move forward.

In his 2014 essay "The Case for Reparations," author and journalist Ta-Nehisi Coates wrote, "What is needed is an airing of family secrets, a settling with old ghosts. What is needed is a healing of the American psyche and the banishment of white guilt.... What I'm talking about is a national reckoning that would lead to spiritual renewal."

Bracy also sees reparations like the Ocoee scholarship as a step toward national healing through the acknowledgment of a history that many find uncomfortable. He says the same about a measure he sponsored last year directing Florida public schools to teach students about the Ocoee Massacre.

"I think it's important for unity. When you're talking about something that happened that's swept under the rug, and you have generations of people who were affected by it, you can't have true reconciliation until it's acknowledged," he says.

Though hotly debated, instances of reparations are not unheard of in the U.S. In two separate legislative programs, Congress paid restitution to survivors of Japanese internment camps run by the U.S. government during World War II. And the government reached settlement agreements in 1974 that included monetary reparations for the victims of the Tuskegee experiment, in which hundreds of Black men with syphilis were left untreated while researchers studied the disease as it progressed in their bodies.

Florida itself has served as a model for reparations, after the state legislature passed a compensation package for surviving victims of a 1923 race riot in the town of Rosewood on Florida's Gulf Coast. The Rosewood Massacre saw a group of angry white aggressors descend on the predominantly Black Rosewood from the neighboring town of Sumner after a white woman alleged that she had been attacked by an unidentified Black man. At least six Black residents were killed, and the town was destroyed.

For the descendants of the Ocoee massacre victims, Bracy says, this week's approval of the scholarship is a welcome step, though it does not approach the level of suffering their families endured.

"They're appreciative that it's been recognized. They know how difficult it is pushing this in the legislature, but they do feel like it's not enough," Bracy says.

Bracy says he will continue to champion the cause of reparations in Florida and potentially at the federal level, as he recently announced a bid for a seat in the U.S. House of Representatives.

"The conversation's been started, and I will continue to fight for it wherever I am," he says.
KEEP MIAMI NEW TIMES FREE... Since we started Miami New Times, it has been defined as the free, independent voice of Miami, and we'd like to keep it that way. With local media under siege, it's more important than ever for us to rally support behind funding our local journalism. You can help by participating in our "I Support" program, allowing us to keep offering readers access to our incisive coverage of local news, food and culture with no paywalls.
Make a one-time donation today for as little as $1.