Miami Beach Must Decide If Ocean Drive Will Reopen to Cars 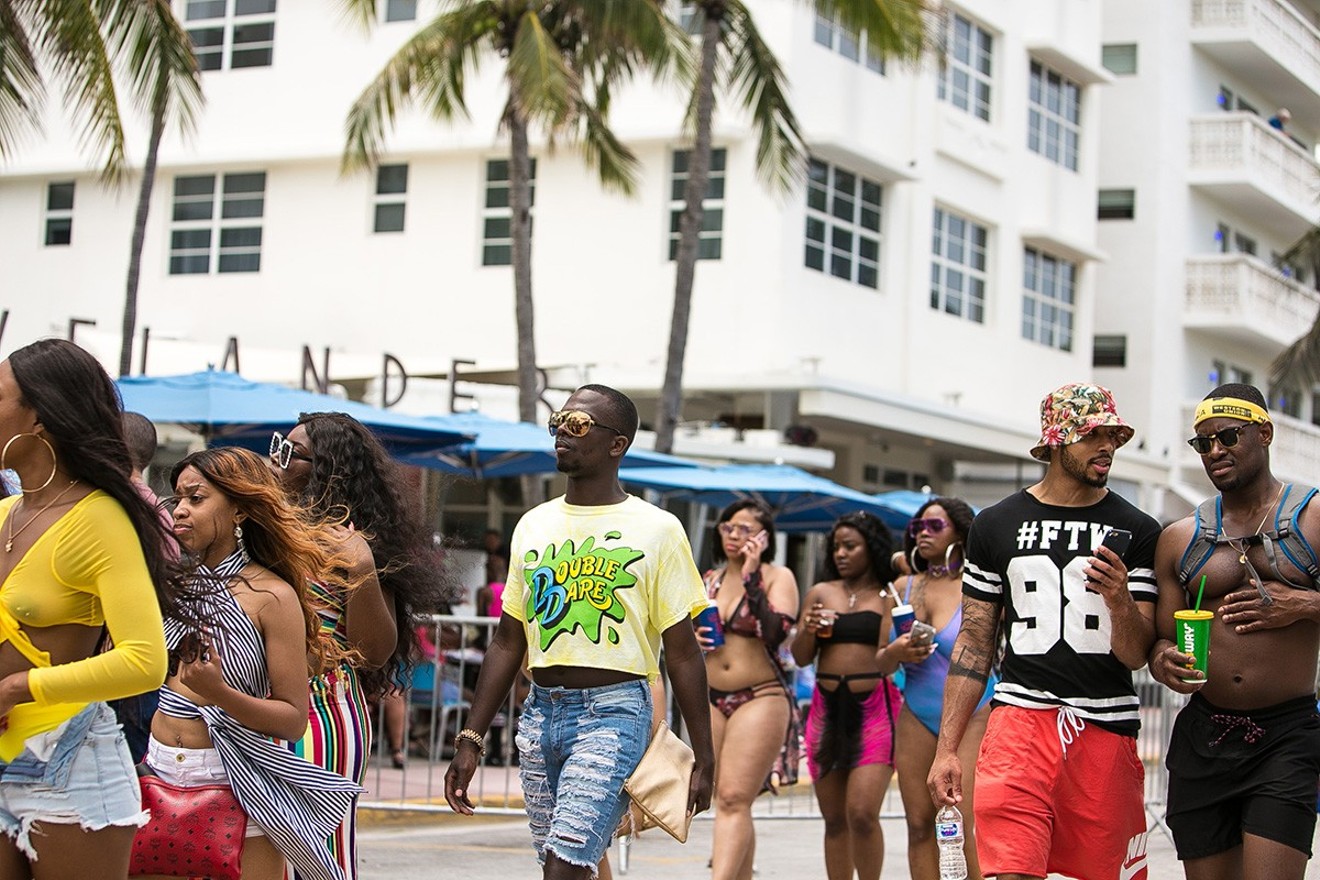 Ocean Drive Photo by George Martinez
From the windows of their Ocean Drive apartment, Don Worth and Nina Weber Worth have looked out and watched the famous Miami Beach boulevard evolve for almost three decades.

Over the past year, the Worths have been able to open their windows and watch as pedestrians and bicyclists travel along what was once a congested cruising destination for cars.

In May of last year, during a wave of COVID-19 emergency orders, the City of Miami Beach closed Ocean Drive to vehicular traffic from Fifth Street to 15th Street, giving more space for cafés to open outdoor seating and for pedestrians to spend time outside. The move was met with support from residents who relished the opportunity to use the street for walking and exercise, but also with pushback from hotel and business owners who lamented the lack of vehicular access to their locations.

Concerns also arose about emergency access, as fire-rescue and police vehicles now have limited entry points, where they must manually open gates.

Since the initial closure, the city commissioned an urban planning study on Ocean Drive and nearby Washington and Collins Avenues to re-envision what the Art Deco Cultural District should look like and whether Ocean Drive should stay pedestrian-only. 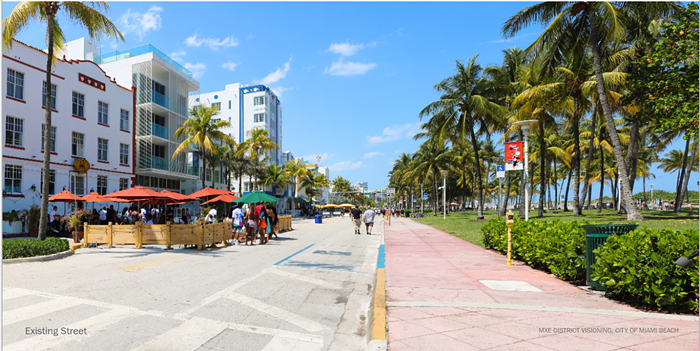 Ocean Drive as it is today, fully pedestrian with an extended sidewalk area for café tables.
Photo courtesy of City of Miami Beach
At an upcoming meeting June 23, the Miami Beach City Commission will discuss a temporary reconfiguration of Ocean Drive until the study is complete and the road can be permanently redesigned.

A commission agenda item brought forward by City Manager Alina T. Hudak offers five temporary options for a pedestrianized Ocean Drive, three of which would keep cars completely off the roadway and two others that would reduce traffic to a single lane.

The first option keeps Ocean Drive as it is now, with café tables on the sidewalk and a shared space for pedestrians and bicyclists on the street. Option two also keeps the configuration the same but introduces a Freebee shuttle service that would drive tourists to their hotels on Ocean Drive rather than leaving them to walk in from a side street. The Freebee would also provide more accessibility for guests with disabilities.

In the past year, several guests have complained about needing to walk several blocks to their hotels because their Ubers or taxis can't drop them off directly on Ocean Drive, says Salem Mounayyer, an owner representative of Nakash Holdings, which owns five properties on Ocean Drive, including Hotel Victor and Hotel Ocean.

"Most of the hotels have these issues. Guests complain about this situation, that they need to drag their feet from blocks away, especially now during hurricane season," Mounayyer tells New Times.

The third option includes the Freebee service but would move café tables to the east side of the street and away from the buildings to give ample space on the sidewalk for pedestrians. The plan also calls for the construction of automatic gate arms at entry points so emergency vehicles can get onto Ocean Drive more easily. 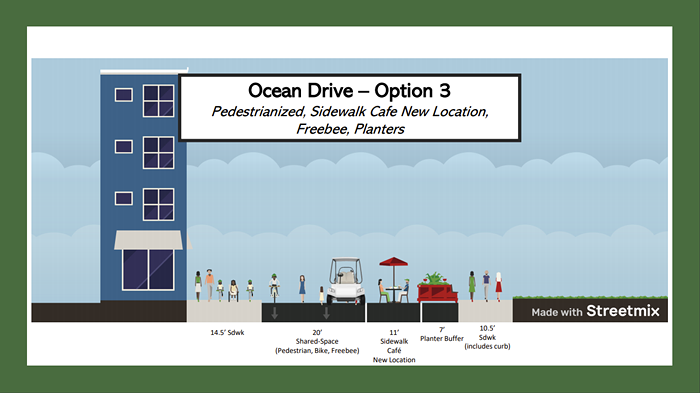 A proposal by the Miami Beach city administration for an interim configuration of Ocean Drive without cars until the city can permanently redesign the road.
Photo courtesy of City of Miami Beach
Options four and five propose bringing cars back to Ocean Drive in one lane of traffic, with either one or two dedicated bike lanes on either side of the traffic.

According to Hudak's office, option three is the administration's favorite, and city officials are recommending that commissioners go with a fully pedestrian street while relocating café tables and providing shuttle services to hotels.

Commissioners will also hear from Bernard Zyscovich, the architect and urban planner hired by the city to study and re-envision the Art Deco Cultural District. At the June 23 meeting, Zyscovich will present the preliminary findings of his study, which will include his own concepts for a reimagined Ocean Drive.

At a May 21 meeting of the Art Deco Cultural District Panel, Zyscovich offered several visions for a new Ocean Drive, which he imagines as an extension of the adjacent Lummus Park rather than a separate area.

Zyscovich does not recommend keeping cars off the road but also said Ocean Drive shouldn't return to the way it was before the pandemic. His recommendation includes expanded sidewalks, a single lane of traffic with drop-off zones for hotels, and a "congestion charge" to reduce traffic. Some cities, such as London, have congestion zones where drivers are charged via a toll-by-plate system for driving in high-traffic areas. Zyscovich suggested at the panel meeting that a congestion charge might help keep Ocean Drive mostly pedestrian by pushing a majority of drivers away.

If the city wants to keep the road closed to vehicular traffic after June 30, it will have to apply for a "block party" permit from Miami-Dade County. According to the upcoming agenda, the city administration plans to apply for the permit.

While the city waits to make a decision, some local leaders have tried to see how people on the ground actually feel about a walkable Ocean Drive.

Daniel Ciraldo, director of the Miami Design Preservation League and a member of the Art Deco Cultural District Panel, spent a recent Sunday alongside Matthew Gultanoff of Better Streets Miami Beach polling pedestrians on whether cars should return to Ocean Drive.


We spent an hour in front of @MDPL1976 on Ocean Drive this morning along with @BikeWalkMB . Here are the results of our first survey re Cars on Ocean Drive. 77% said No - 23% said Yes. @MiamiBeachNews pic.twitter.com/Kt6AYtkAN4

Out of 60 people informally polled, Ciraldo says 46 opposed bringing cars back, while 14 supported vehicular traffic. Ciraldo says he plans to do another poll, preferably of drivers on nearby Miami Beach streets, so he can share the results before the June 23 commission meeting.

"The more we can study this and look at pros and cons and hear from the people spending their time there, the more we can develop a more cohesive vision for future of the street," he says.

The Worths, who have lived on Ocean Drive since 1993 and are now in their 70s, hope the street can stay as it is — free of traffic and loud cars.

"Pedestrianization is something my wife and I have always wanted to see since we got here. We've looked out on the street on weekends and seen the same cars circling around and around cruising for 28 years, and it always occurred to us that it was such a waste," Don Worth tells New Times. "It's quieter now. We can keep our windows open."
KEEP MIAMI NEW TIMES FREE... Since we started Miami New Times, it has been defined as the free, independent voice of Miami, and we'd like to keep it that way. With local media under siege, it's more important than ever for us to rally support behind funding our local journalism. You can help by participating in our "I Support" program, allowing us to keep offering readers access to our incisive coverage of local news, food and culture with no paywalls.
Make a one-time donation today for as little as $1.