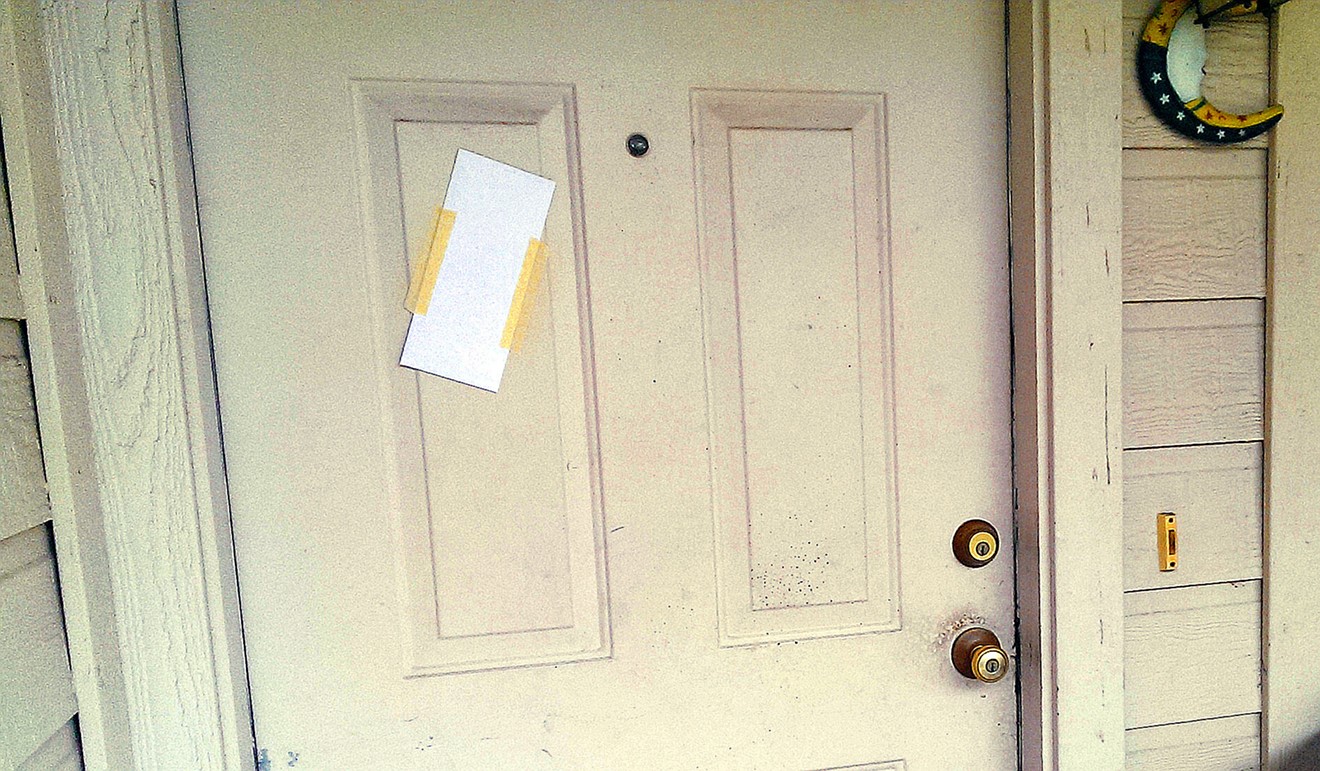 For Miami-Dade residents facing the threat of eviction, organizing with their neighbors gives them a source of collective pride and power. Photo by Rental Realities/Flickr
When Hurricane Irma was churning in the Atlantic in September 2017, Vivian Smith asked her landlord for extra time to pay the rent because she needed to buy her daughters' school uniforms. She was a Black single mom who worked two jobs, one as an Instacart shopper and the other as a grocery-shelf restocker. Still, she made a meager salary and regularly had to choose between paying rent, utilities, the car loan, or other necessities in Miami, one of the nations's most expensive cities.

Her landlord told her it wouldn't be a problem if she paid the rent by the end of the month. But, Smith says, the landlord went back on his word and evicted her three days before Hurricane Irma made landfall in South Florida.

"He said he didn't want to deal with a tenant who was a problem," Smith says.

After three months spent living in her car, Smith found an apartment near Liberty City for herself and her daughters. They were so happy to have a home again, they slept with blankets on the cold tile the first night.

But three years later, in the midst of the COVID-19 pandemic, Smith was threatened with eviction again. Though the Centers for Disease Control and Prevention had placed a moratorium on evictions, in January Smith says her landlord told her he wanted her out of the apartment because she fell behind on rent.

"It was difficult," she says. "I asked God why he gave me these children for them to live like this."

Under Florida law, tenants have certain rights. They're entitled to living privately and peacefully. They're entitled to a home that is fit to be lived in — meaning landlords are required to provide a structurally sound place with working plumbing, hot water, and smoke detectors, as well as doors and windows that lock. Tenants are not required to pay for their own repairs. Tenants can even withhold rent with some notice if the landlord fails to provide a safe and habitable home.

But those rights aren't enough when it comes to protecting tenants against discrimination, retaliation, poor living conditions, and abuse from landlords, according to organizers from the Miami Workers Center, a nonprofit focused on securing housing and building power among poor and working-class Miamians. Now tenant leaders and nonprofit organizers are advocating for an expansion of renters' rights and they've initiated a campaign to hold landlords accountable by bringing a tenant bill of rights to Miami-Dade.

"One of the greatest difficulties we came across was that when tenants feel as if their rights, health, and safety are being violated by a landlord, no resources and no recourse are available to you," says Zaina Alsous, an organizer with the Miami Workers Center. "There is no central municipal enforcement of existing tenant protections.“

The Miami Workers Center estimates that one in 20 renters living in Black neighborhoods have faced the threat of eviction during the COVID-19 pandemic despite the CDC’s eviction moratorium. Alsous says the organization has found that single mothers and tenants of color are disproportionately affected by the threat of eviction. Data from the Center on Budget and Policy Priorities, a nonprofit think tank based in Washington, D.C., back that up: Renters of color and families with children reported higher rates of rent hardship in 2020 and 2021. The nonprofit also estimates that one in five renter households are behind on rent.

Smith was on her own during her 2017 eviction. But this time, she had support from Miami Workers Center. Organizers regularly ask the clerk of courts' office to provide the names of all Miami-Dade residents facing eviction. They came across Smith's name and called her in February to refer her to rental assistance and other resources.

Smith’s case was ultimately dismissed, and she and her kids were able to remain in their apartment.

"I remember my first call with Vivian," says Alsous. "I was really struck by the level of faith and grace she was exhibiting at such a difficult time. It was very clear she knows what she deserves and moves in the world with a lot of dignity and self-respect. I talk to a lot of tenants who feel very disempowered. It means a lot to be connected with leaders in our community who are fired up and ready to defend themselves and others."

The nonprofit invited her to tenant-organizing meetings to share her experiences with other people facing eviction. She immediately became a leader among the group. Her experience with housing insecurity has turned her into an advocate for people like her: women taking care of children, earning measly incomes, struggling to pay the bills, and praying for help.

A tenant bill of rights would offer protection to Miami's most vulnerable renters. The Miami Workers Center is advocating for the creation of an Office of the Tenant Advocate, a municipal government agency that would uphold existing tenant protections and address concerns of illegal evictions, sexual harassment, discrimination, retaliation, and poor living conditions.

"The story that is told to us over and over again is that tenants don't feel protected," Alsous says. "That landlords had full control to decide if their family had a roof over their heads or not. We heard countless stories of various forms of abuse — rents doubling during a pandemic when people lost work, tenants with disabilities not having their needs addressed, sexual harassment from landlords, tenants living in mold and vermin infestation. At the center of all these issues is a fundamental lack of accountability for landlords in Miami."

The tenant bill of rights would also require landlords to inform tenants of their rights and disclose issues with the property (such as mold, infestations, or structural problems), prohibit discrimination against tenants based on previous evictions, require Miami-Dade County to enforce current tenant protections that shield tenants from being retaliated against for organizing with their neighbors, allow tenants to conduct necessary repairs on their own and deduct the cost from their rental payment, and guarantee a tenant's right to legal representation.

“We're working to create increased infrastructure for tenant protections and pass policies informed by the experiences of tenants in Miami,” Alsous says. “We're working to shift the terrain and ensure that every single person who lives in Miami can live with dignity and feel protected even as a renter."

Being evicted is traumatic, Smith explains. Back in 2017, she weathered Hurricane Irma at her eldest daughter's house. But after the hurricane came and went, she had nowhere to go. She and her two younger daughters slept in her car until they found their next apartment. The girls continued going to school, and Smith continued working her two jobs. They ate cheap fast food until they got tired of it. They urinated in the bushes of dark shopping centers and washed up with baby wipes — sometimes right in the car, other times in hotel lobby restrooms. When Smith could scrape together enough cash, they stayed in hotels on weekends. They enjoyed the cold of the air conditioning and the comfort of sleeping in and watching television.

"I'm faithful to this campaign for a tenant bill of rights," Smith tells New Times. "We need people to know that we have rights, that we are somebody, that we're not just poor people. We deserve to live in a good and healthy environment for our kids."

Tayana Gibbs believes a tenant bill of rights would give Black single mothers like her a voice. She says she always felt racially profiled and targeted by her former leasing officer, especially after she began organizing tenants in her West Little River apartment complex.

Days after Gibbs' landlord initiated eviction proceedings against her in March, an organizer with the Miami Workers Center knocked on her door and referred her to rental assistance and an eviction-defense attorney. Gibbs introduced the Miami Workers Center organizer to several of her neighbors and asked them about their experiences living in the complex. Gibbs says she learned that other Black single mothers felt the way she did — discriminated against, looked down upon, and forced out of the complex. Gibbs says when she first moved into her apartment three years ago, she saw about ten Black women move themselves and their kids out of the complex.

"I realized that this was bigger than me," Gibbs says. "Something was going on here."

In court records, Gibbs' landlord alleges that she walked into the leasing manager's office and berated the staff over a notice to vacate. The property manager said Gibbs needed to leave because she had an unauthorized tenant living in her apartment. Gibbs says she was in a relationship with a man who used to visit her and help her young son with his virtual schooling. She disputes ever berating anyone in the leasing manager's office. She believes her former leasing officer doubled down on the effort to evict her in retaliation for organizing.

A licensed massage therapist, Gibbs says she aspires to start her own business but that it's difficult to focus on her goals, her son, and her livelihood when she's staring down the threat of eviction for something she says she didn't do.

"A tenant bill of rights would give us more security," she says. "It would feel like the law is on our side. As a tenant, you just feel like there's nothing you can really do, but you hope and pray that the situation works out the best for you. This would definitely make you feel like you have some type of voice or some type of power because at this point, we don't."

The bill of rights proposal is the result of hours of housing organizers knocking on thousands of doors across Miami-Dade and making calls to connect with tenants facing eviction, learn about their living situation, and address their needs.

Alsous says the Miami Workers Center hopes to present the tenant bill of rights to Miami-Dade commissioners after the August recess and before the CDC’s moratorium on eviction in areas experiencing “high levels of community transmission” (which includes Miami) expires on October 3.
KEEP MIAMI NEW TIMES FREE... Since we started Miami New Times, it has been defined as the free, independent voice of Miami, and we'd like to keep it that way. With local media under siege, it's more important than ever for us to rally support behind funding our local journalism. You can help by participating in our "I Support" program, allowing us to keep offering readers access to our incisive coverage of local news, food and culture with no paywalls.
Make a one-time donation today for as little as $1.