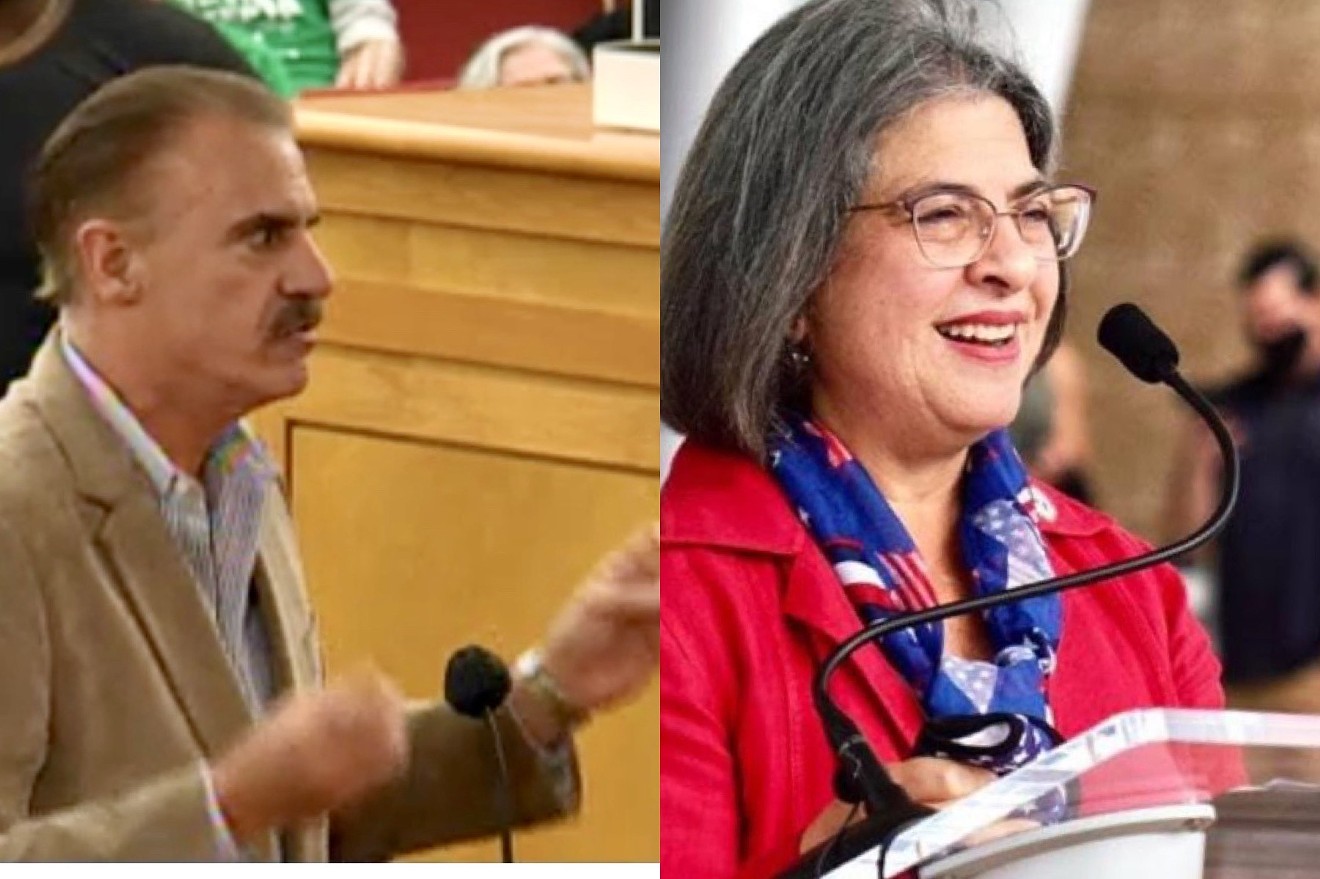 West Kendall residents, including ZooMiami spokesperson Ron Magill (left), are urging Miami-Dade County Mayor Danielle Levine Cava to veto the county commission's vote allowing development on one of the area's last remaining green spaces. Screenshot via miamidade.gov/Photo courtesy of Daniella Levine Cava
To be another West Kendall gated community, or not to be: That was the question Miami-Dade County commissioners took up at their November 17 zoning hearing to determine the fate of one of the last remaining green spaces in a suburb already facing overcrowding and traffic.

But after commissioners voted 10-2 to approve the 550-home plan on the shuttered 168-acre Calusa Country Club golf course, scores of residents who opposed the development and attended the hearing in matching green "Save Calusa" T-shirts are not acting defeated. They're aggressively pushing one last-ditch effort to save the wild, overgrown land from construction: an email campaign urging Mayor Daniella Levine Cava to veto the commission's vote.

The most high-profile Kendall resident in opposition of the development is longtime ZooMiami spokesperson and outspoken wildlife conservationist Ron Magill, a West Kendall resident who requested time off from work to attend last Wednesday's hearing as a private citizen and defend the Calusa rookery, home to the endangered bonneted bat and threatened tri-colored herons.

During public comment, residents were allocated one minute apiece to speak. "We need to make room for more people, but where does it stop? Big developers can afford lawyers and consultants. Get wildlife experts in there, not paid consultants," Magill pleaded from the podium, pointing his finger at the dais.

When commissioners cut him off at the 60-second mark, he was outraged. "You can buy consultants, but you can't buy wildlife once it's dead," he said as he was being escorted away.

"It's not over!" Magill tells New Times, alluding to the mayoral-veto campaign. "People have just succumbed to the idea that ‘It is what it is' — and we’ve got to stop that, we need to change that. Maybe I'm being naive and putting myself on the line and burning a lot of quote-unquote bridges with powerful people — and I don't really care. You have to have some kind of moral ethics on what's being done."

The Calusa rookery
Photo by David Horn
The fate of those 168 acres in West Kendall has hung in the balance for more than a decade. In 2003, Facundo Bacardí, chairman of one of the largest family-owned liquor brands in the world, bought the Calusa Country Club for $2.7 million — a bargain-basement deal, largely thanks to a 99-year covenant that prevented any development on the property until 2067.

The golf course and its clubhouse had been damaged during Hurricanes Katrina and Wilma in 2005. It was never repaired, and the facility was shuttered six years later.

And there was a loophole in the covenant: It could be nullified if 75 percent of the 146 homeowners whose properties ring the golf course agreed to waive it.

In 2011, Bacardí offered to pay the homeowners $50,000 apiece to nullify the covenant. When he failed to persuade 75 percent of them, he sued in court and lost. He then arranged individual settlements of upward of $300,000 with 123 homeowners — roughly 84 percent — creating a deep divide in the community between homeowners on the ring (all of whom signed nondisclosure agreements in exchange for the payments) and their neighbors who wanted to keep developers out.

In October 2020, commissioners voted to release the 99-year covenant. In February, Bacardí sold the property to homebuilder GL Homes for $32 million, retaining a 35 percent interest in any development. Bacardí and GL Homes now plan to build 550 homes on the land.

Dismissing residents' assertions that the Florida Fish and Wildlife Conservation Commission should undertake further environmental surveys to protect endangered wildlife like the bats and herons, commissioners voted to change the site's current zoning from parks and recreation to high-density residential.

"It's super simple: Everyone in favor of this is making money off it," says attorney David Winker, a City of Miami resident who is representing the Save Calusa crowd pro bono. "Everyone who is opposed — including me — we're not being paid." Residents opposed to the development attended Wednesday's zoning hearing in a sea of matching "Save Calusa" green shirts.
Photo courtesy of Amanda Prieto
Though Miami-Dade County's Department of Environmental Resource Management approved the project, Magill says he wouldn't let his position as a county employee at ZooMiami keep him from speaking out against the project, which he considers directly opposed to his lifelong mission of wildlife conservation. For years, Magill says, he has watched flocks of herons and other Florida wading birds come in to roost at the Calusa rookery on his daily walks.

"I was surprised that the [county] supported this, but I'm not going to be a hypocrite," Magill says. "I'm not going to let anyone tell me how I'm supposed to think when it comes to wildlife, or to toe the county line. We need to stand up to this kind of stuff. I don't want to look at my grandchildren and say, 'There used to be tri-colored herons here.'"

At last Wednesday's vote, District 7 Commissioner Raquel Regalado voted in favor of bringing the development to her district. Commissioners Joe Martinez and Sally Heyman were the only votes cast in opposition. Martinez, who represents a nearby district, expressed concern that the development would bring unwanted traffic and overcrowding. Commissioner Rebecca Sosa, who had voted against breaking the covenant last October, didn't attend the meeting.

When Levine Cava served as commissioner in District 8, she too voted against breaking the covenant. Though most commissioners defer their vote to the home commissioner, a mayoral veto would require a two-thirds majority to overturn and might sway a few commissioners, including Sosa and Danielle Cohen Higgins, who was appointed to replace Levine Cava last November.

"It's easy to say you're pro-environment if you're Daniella [Levine Cava]," Winker says. "It's hard to tell developers no when they're waving money in your face. It's hard to stand up for those principles."

Mayoral spokesperson Natalia Jaramillo tells New Times that, according to the so-called Jennings rule and "in exercise of the veto," Levine Cava is not permitted to "read or participate in written or other communications" about the zoning hearing with media, residents, or the applicant.

"The mayor is committed to making the best possible decision about this application," Jarmillo writes in an emailed statement, "and will be carefully considering all evidence shared during the public hearing process, within the parameters of the law."

Meanwhile, Winker tells New Times he's filing a complaint with the Miami-Dade County Commission on Ethics and Public Trust, alleging that Wednesday's meeting violated a county ordinance that requires notices of public hearings to appear in a newspaper advertisement with the "date, time, and place of the hearing." Though a notice appeared in the Miami Herald informing residents of the hearing on October 20, Winker says no notice was published about Wednesday's meeting.

The county code states that "failure to provide required notice...renders voidable any hearing held on the application."

If all else fails, Save Calusa leader Amanda Prieto, an education researcher and mother, notes, "On the day that the bulldozers come, let's just say there's only one way in."
KEEP MIAMI NEW TIMES FREE... Since we started Miami New Times, it has been defined as the free, independent voice of Miami, and we'd like to keep it that way. With local media under siege, it's more important than ever for us to rally support behind funding our local journalism. You can help by participating in our "I Support" program, allowing us to keep offering readers access to our incisive coverage of local news, food and culture with no paywalls.
Make a one-time donation today for as little as $1.