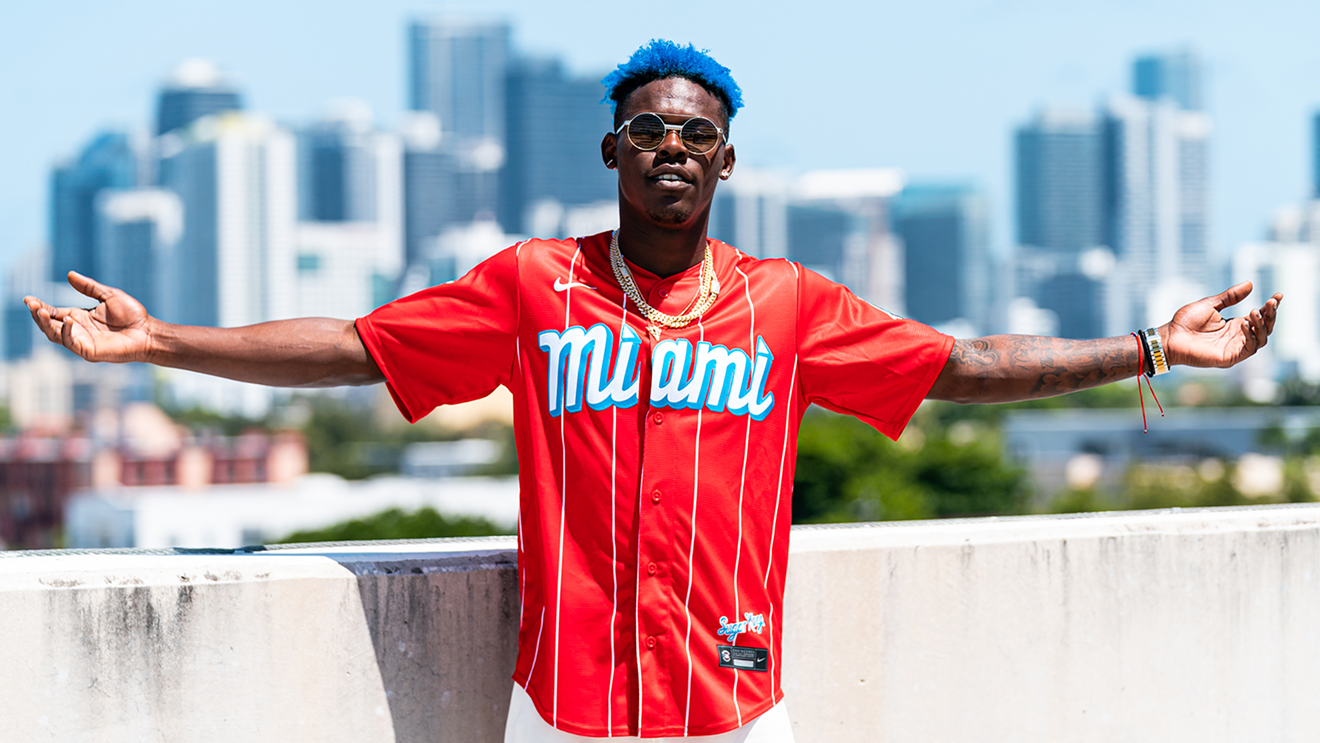 The new uniform embodies the swagger, vibrance, and vibe of Miami. Photo courtesy of the Miami Marlins
From playing their home games in Little Havana to celebrating Latin culture, the Miami Marlins have always been at the forefront of ensuring Latin Americans are part of the team's identity.

Now, with an assist from Nike, the Marlins are bringing that relationship closer to the diamond as the team unveils a sleek new look meant to honor its biggest fans.

Developed and designed in collaboration with Nike and MLB, the Marlins' "City Connect" jerseys are a new signature design that the team says speaks to the legacy, culture, passion, and pride for baseball in South Florida. The distinctive look is a homage to the Cuban Sugar Kings, a Cuban minor-league team that played from 1946 to 1960, a tribute to that franchise's legacy and influence on baseball across Latin America.

The new red uniform is meant to capture the energetic vibe Latin America has always contributed to the game of baseball. The Marlins plan to debut the new look this weekend, May 21-23, following Cuban Independence Day on May 20 and including the celebration of Cuban Heritage Night at LoanDepot Park on May 22.
click to enlarge Photo courtesy of the Miami Marlins
"Our new City Connect uniform seeks to blend sports and lifestyle fashion, remixing the Sugar Kings' stylish uniform that embodies the unique sense of energy, passion, and swagger from our community," Michael Shaw, the Marlins' vice president of experience and innovation said in a team press release. "Thanks to the collaborative efforts with Nike, we developed a refresh of the legendary uniform with a modernized look that embodies the legacy and heritage of past generations and embraces the future of our city."

Prior to the Marlins' design reveal, the Boston Red Sox debuted a yellow and sky-blue uniform inspired by the traditional colors of the Boston Marathon, which is usually held on the city's annual Patriots' Day. For the Miami edition, Nike says the idea was to bring the feel of Miami directly to the players' chests.

"The Marlins' jersey captures the essence of the Latin American influence on Miami and creates a new expression that's uniquely authentic to the city and its people," Wil Green, senior creative director at Nike said through a press release. "We wanted this jersey to be the one new fans pick to represent their city, from Marlins games to their favorite festivals."
click to enlarge The new uniform embodies the swagger, vibrance, and vibe of Miami.
Photos courtesy of the Miami Marlins
Green says the Miami lettering on the chest is inspired by the handpainted signs that Little Havana is known for, while the patch on the right sleeve is symbolic of the Marlins taking up the Sugar Kings' crown and ushering in the next generation of Latin American baseball talent.

Fans can purchase the Marlins' City Connect gear starting today at the New Era Team Store at the stadium, as well as via marlins.com/shop, nike.com, and select retail locations.
KEEP MIAMI NEW TIMES FREE... Since we started Miami New Times, it has been defined as the free, independent voice of Miami, and we'd like to keep it that way. With local media under siege, it's more important than ever for us to rally support behind funding our local journalism. You can help by participating in our "I Support" program, allowing us to keep offering readers access to our incisive coverage of local news, food and culture with no paywalls.
Make a one-time donation today for as little as $1.