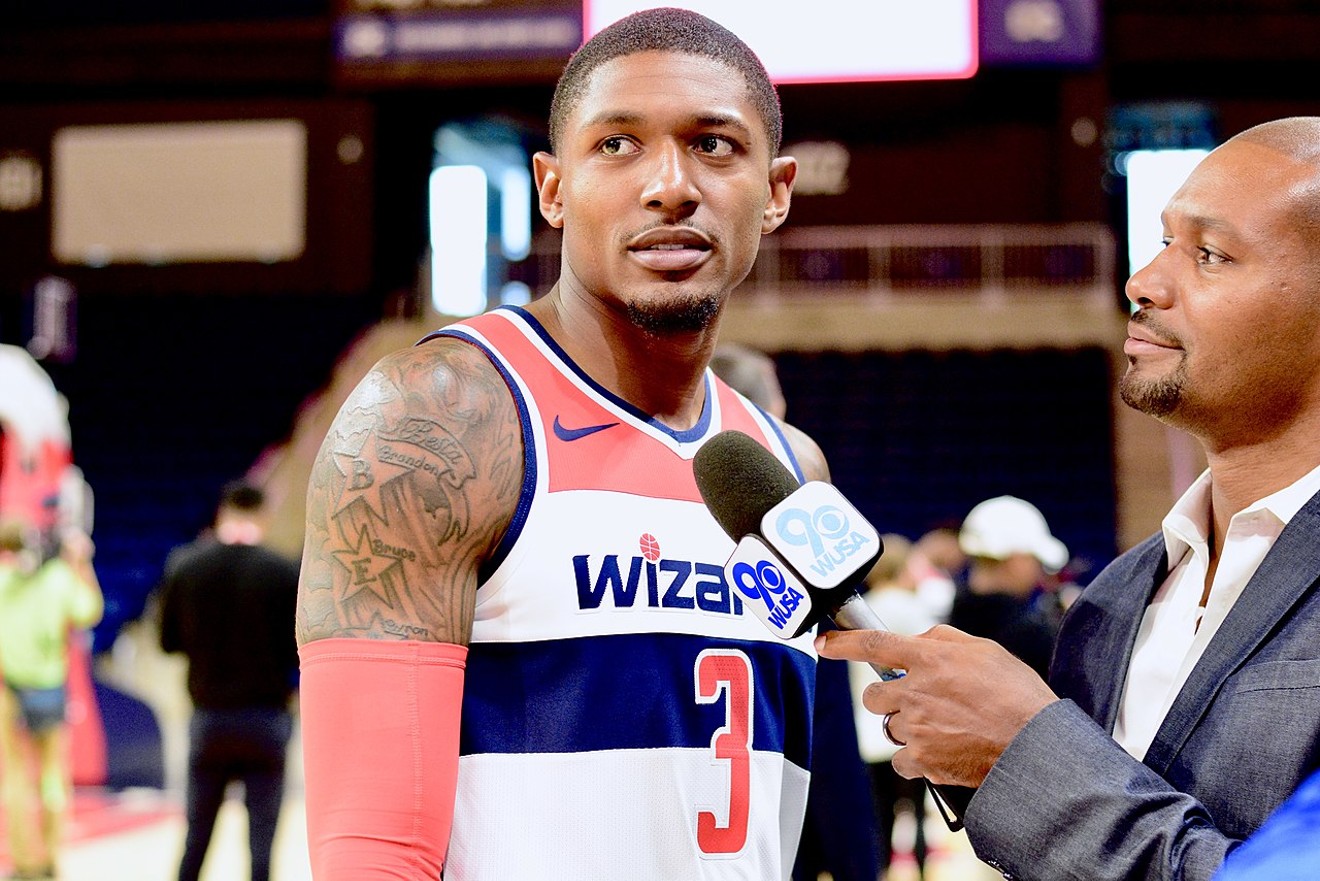 It's long been rumored that the Heat would jump at the chance to acquire Bradley Beal. Photo by All-Pro Reels/Wikimedia Commons
With the NBA trade deadline one week away, time is running out for the Miami Heat to make any major changes to its roster. There are buyers and sellers at every trade deadline, and as usual, the Miami Heat comes to the table looking to get better, not to strip the team for parts.

One year ago, the Heat added Jae Crowder and Andre Iguodala in a trade that undoubtedly helped propel Miami to an appearance in the NBA Finals. Who could that missing piece be this season? Here are ten players who make sense for the Heat to kick the tires on before the trade market closes.
Kevin Love. There will be a theme in this article: The Miami Heat is looking for a power forward who can grab some rebounds next to Bam Adebayo. As of now, the Heat is one of the worst rebounding teams in the NBA. Kevin Love would change that.

Love's rebounding is much needed, but his three-point shooting would also stretch the floor, opening up the paint for Jimmy Butler and others to drive. Love is also a perfect "Heat culture" fit. His contract with the Cleveland Cavaliers only runs two more seasons, which matches up perfectly with the Heat's current team and the window they'd have to stay together, contracts-wise.
Kyle Lowry. Kyle Lowry would be expensive to bring to Miami. If Lowry came to the Heat, it would likely mean either Goran Dragic or Tyler Herro would have to depart. That would be a tough pill to swallow, but the Heat would undoubtedly be a better team with a Big 3 of Jimmy, Bam, and Lowry.

Lowry is only under contract with the Toronto Raptors for this season, which, depending on who you ask, is a positive or a negative. On one hand, it would leave the Heat with options this summer. On the other, the team would risk being left with nothing to show for trading away Dragic or Herro.
John Collins. If the Heat is looking for a piece to add to its present and future, John Collins is a good fit. The Atlanta Hawks forward is 6-foot-9 and does a little bit of everything the Heat needs on the court next to Bam. The only issue is that Collins will require a new contract this summer that nears the max level.

But if the Heat wants a 23-year-old forward who can knock down three-pointers, he's the guy.
Marvin Bagley III. If the Sacramento Kings are actually interested in giving up on the player they selected with the second-overall pick in the 2018 draft, then the Miami Heat should be looking into acquiring Marvin Bagley. Bagley has played horrific defense thus far in his short career, but he's only 22 and has a lot of room to grow as a player.

The Miami Heat has a reputation of turning guys nobody's ever heard of into NBA players, so what do you think it could do with a 6-foot-11 22-year-old with the potential of a young Kevin Durant? The Heat would likely need to part with Duncan Robinson and/or Kendrick Nunn to make this happen. It may even need to throw in a first-round pick. It would be worth the gamble just to see what kind of player the team could turn Bagley into.
Victor Oladipo. This man desperately wants to play for the Miami Heat. Victor Oladipo has done everything but take out an ad in New Times to express his desire to come to Miami. So why would the Heat trade for a player they can likely have this offseason without needing to give up anything in return? Because they'd have him this season, duh!

The rubber is about to meet the road on a player like Duncan Robinson. If the Heat doesn't want to break the bank to pay him, why not go ahead and trade him to the Houston Rockets for a borderline All-Star so Miami can start the Bam-Jimmy-Oladipo project a year early? It could make sense, depending on the Heat's master plan. It might not even cost that much to make it happen.
Larry Nance. The Miami Heat is in need of a power forward who can rebound and do the dirty work. Larry Nance Jr. is basically just that. While Nance does have a decent offensive game, his true value to the Heat would be rebounding and defense. Bam Adebayo would be instantly free to do much more on both ends of the court if Nance was acquired.

Nance is another guy who would fit right in with the Heat and what the franchise is about. The biggest hurdle with acquiring him would be the price relative to what he brings to the table. It just might not make enough sense or involve enough upside.
LaMarcus Aldridge. Once again, we have a player appearing on this list who would be acquired with the specific intent of making Bam Adebayo's life easier. The Heat has reportedly made an offer to the San Antonio Spurs, but rumors are that the Spurs are more likely to cut LaMarcus Aldridge and let him sign where he pleases.

It's very possible the Heat can sign Aldridge after he's bought out by the Spurs. It's less likely they'll trade for him. Either way, there's a chance Heat fans see him on the floor this season. He would be the closest thing to Chris Bosh fans have seen at the power-forward spot.
Nikola Vucevic. The Heat should trade for this man if only because it will stop him from absolutely torching the team as an opponent. Nikola Vucevic was an All-Star this year, and if the Heat just signed him in free agency, he would instantly make Miami an extraordinarily better team. The problem is, he isn't a free agent, and it would cost the Heat half of its roster to acquire him.

Vucevic is a pipe dream. That feels weird to say, but it's true. The Heat will have to focus on players at a lower level than the Orlando Magic star.
Bradley Beal. Not going to happen, but maybe we can write it into existence here. It's long been rumored that the Heat would jump at the chance to acquire Bradley Beal, the likely scoring leader of the NBA when this season ends. The cost would be enormous — likely all of Miami's young players and a pair of first-round picks. But the chance to form a Big 3 with Bam, Jimmy, and Beal is just too tempting to pass up if it presented itself at the deadline.

In the end, nothing is about just this season. It's about the Heat giving itself the best chance at winning a title in the next three seasons. Adding one of the brightest young stars in the game would catapult Miami into a perennial favorite in the East alongside the Brooklyn Nets. If you can get it done, you do it.
KEEP MIAMI NEW TIMES FREE... Since we started Miami New Times, it has been defined as the free, independent voice of Miami, and we'd like to keep it that way. With local media under siege, it's more important than ever for us to rally support behind funding our local journalism. You can help by participating in our "I Support" program, allowing us to keep offering readers access to our incisive coverage of local news, food and culture with no paywalls.
Make a one-time donation today for as little as $1.