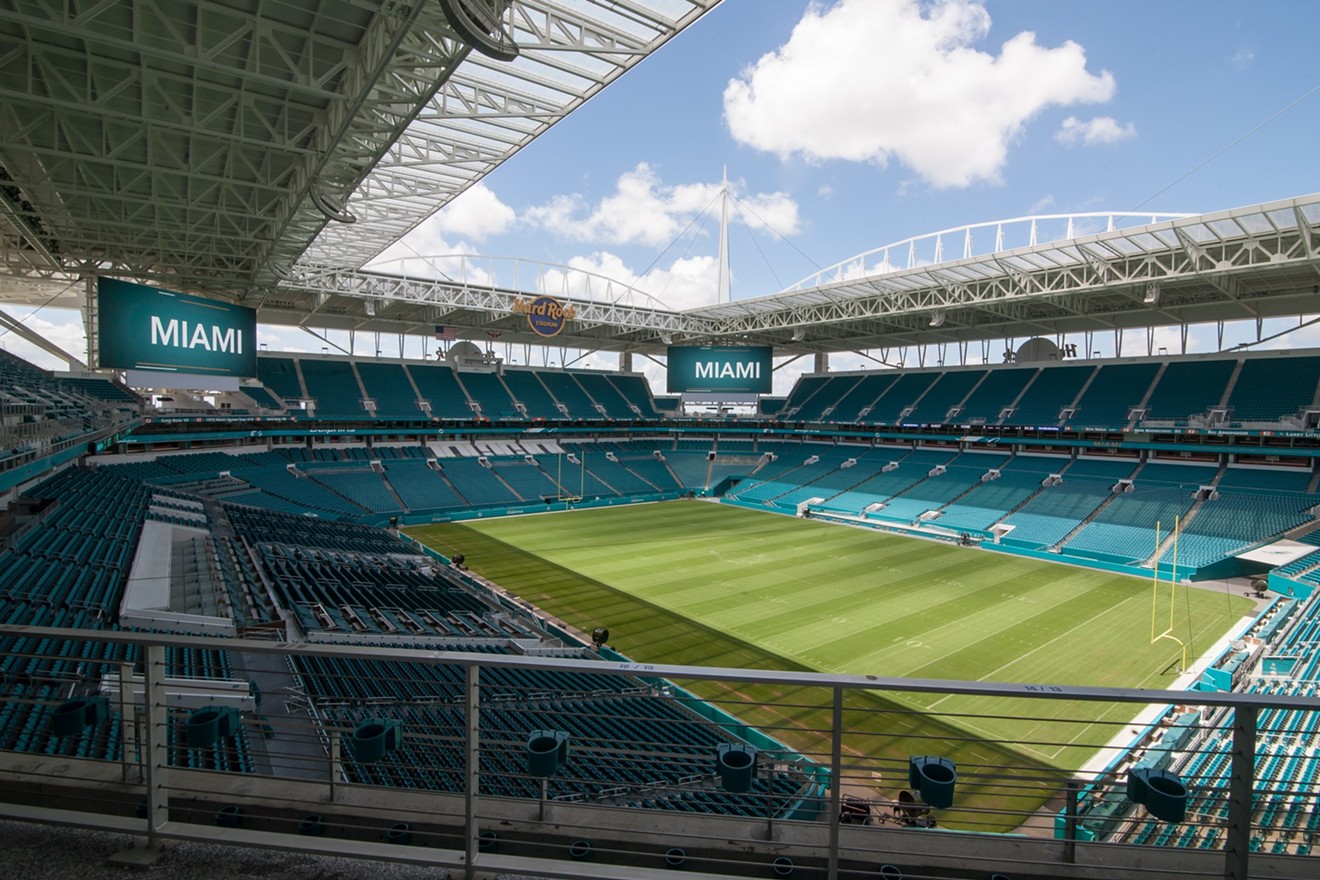 The Curse of the Tequesta will forever haunt Miami's football teams. Photo by Monica McGivern
Dolphins fans have to be asking themselves where this franchise went wrong. Not so much why the team is 0-7 this season — because it's rather obvious that was the plan — but more so, how it's come to this.

On this Halloween Eve, we're reminded that the decades of heartbreak, misery, bad luck, and pain the Dolphins franchise has endured since the early '80s was also the plan — just not their plan.

A little more than five years ago, this writer uncovered some startling news: The Miami Dolphins are cursed. More specific, the land on which Hard Rock Stadium is built was once an Indian burial site. Consequently, the "Curse of the Tequesta" is a real thing that is obviously the sole reason football in Miami has been an unmitigated disaster for any team that plays on that field.

At the time, the suggestion that the Dolphins and University of Miami Hurricanes were working against a paranormal opponent each time they took the field was scoffed at — even mocked.

Since then, however, more fans have come to believe something supernatural is indeed at play. Even T-shirts have been made. Pretty much everyone is beginning to come around to what we tried to tell you in 2014: The Curse of the Tequesta will forever haunt our football teams no matter the caliber of coach they hire or money they spend on talent.

If you still don't believe in the Curse of the Tequesta after all this time, we don't know what to tell you. Actually, we have five things to tell you. Let's hope they'll make you a believer.
5. Only days after construction workers found Native American remains, the Dolphins' bad luck began. In 1984, Dan Marino became a thing — tremendously awesome thing. He broke just about every passing record on his way to leading the Dolphins to the Super Bowl that year. Everyone thought Marino and the Dolphins would be back many more times, if not the next season.

Then the Curse of the Tequesta struck. It goes like this:

That's where it all changed for the worse. The Dolphins have never been back to the Super Bowl since that 1984 season. That's 27 years ago, for those counting at home. We could detail all the things that have happened in those 27 years, but we think you know.
4. The Hurricanes are 89-60 since leaving the Orange Bowl in 2008. Ever since the Canes moved from the Orange Bowl, they have been a nobody. These are just the sad facts. If any other school went 89-60 over a decade-plus stretch, they'd be considered a blip on the schedule, but Miami has that "U" on the helmet, so the respect is there.

Coincidence? Probably. Spooky? Definitely.
3. Neither the Dolphins nor the Hurricanes have had a big win since moving to Hard Rock Stadium. Part of being cursed isn't so much about never having success — it's that both teams have been close to doing great things at times but then lose in devastating fashion. It's almost as if, you know, something was working against them.

Here are the facts: The Dolphins have exactly one playoff win since 2000 and multiple heartbreak playoff losses before that. The Hurricanes have one bowl win — um, the Emerald Bowl — since moving to Hard Rock Stadium. Neither team has a signature win at home in decades.

Beating a nothing Notre Dame in the middle of the regular season doesn't count. Beating the New England Patriots in a game that means nothing doesn't count. Neither team has pulled out a big win since moving from the Orange Bowl. We're talking historical Super Bowl/Orange Bowl stuff.
2. The Fins and Canes have tried every way possible to circumvent the curse, and it's all failed miserably. The two Miami football teams have had a combined 19 head coaches since their moves to Hard Rock Stadium. There have been rebuilds of rebuilds and refurbishes galore. The Dolphins have had the top pick in a draft and screwed it up. Now they're losing every game on purpose to grab a single player they hope can fix it all.

None of it has worked or will work. Everything and everyone has failed, yet at the Orange Bowl, everything and everyone seemed to fall into success. Sometimes it didn't even make sense how good both teams were back in the day. Since changing stadiums, both are more often laughingstocks.
1. The Miami Marlins are one big Curse of the Tequesta troll job. One of the most common things disbelievers will say is "How could the Curse of the Tequesta be real if the Marlins won two World Series titles at that stadium?" Well, it's obvious to those who are woke: One of the worst parts about the Curse of the Tequesta is the Miami Marlins. Let's explain.

The Marlins won titles in 1997 and 2003 at what is now Hard Rock Stadium and years later moved to Marlins Park after robbing Miamians of billions of dollars so the team could — wait for it — tear down the stadium where the Dolphins and Hurricanes reaped all of their success. Now the Marlins suck on the ground the Hurricanes and Dolphins never should have left, and Miamians will be paying for the ballpark on that land for decades.

Checkmate, Tequesta Indians. A terrible baseball team stomps on the grave of the greatest stadium ever built in Miami, and the Dolphins and Hurricanes play on an Indian burial ground.
KEEP MIAMI NEW TIMES FREE... Since we started Miami New Times, it has been defined as the free, independent voice of Miami, and we'd like to keep it that way. With local media under siege, it's more important than ever for us to rally support behind funding our local journalism. You can help by participating in our "I Support" program, allowing us to keep offering readers access to our incisive coverage of local news, food and culture with no paywalls.
Make a one-time donation today for as little as $1.