Members of Florida Task Force 1 rescue stranded residents from barrier islands on Florida's west coast on September 29, 2022, after the region was decimated by Hurricane Ian's storm surge. Photo by Miami-Dade Fire Rescue
On their first round of Hurricane Ian rescue missions, Miami-Dade Fire Rescue's elite Urban Search and Rescue team walked for miles, door-to-door, through the remnants of towns on Florida's Gulf Coast, making their way through busted concrete and 10-foot-high piles of splintered wood framing.

Military helicopters had dropped off the team, known as Florida Task Force 1, onto Sanibel and Captiva, island communities inundated a day earlier by what Florida Governor Ron DeSantis called a "biblical storm surge." Rescue videos provided by Miami-Dade County show the task force surrounded by leveled homes, boats split in half, and debris as far as the eye could see.

The residents whom the rescuers encountered looked exhausted from riding out the storm. Some were injured and dehydrated, according to Miami-Dade Fire Chief Ray Jadallah. They were escorted to rendezvous points to be airlifted inland.

One elderly couple walked slowly towards a Chinook-style helicopter as members of Task Force 1 held them by their arms. A slender, tanned woman on another rescue flight stared down with a sullen expression as she clutched a white garment, flanked by a bearded man whose eyes were glazed over in the sunlight coming from the helicopter window.

Sanibel Island was one of the first priorities in the rescue effort, Chief Jadallah said in a recorded statement. The bridge to the island had collapsed from storm damage, cutting stranded people off from the mainland. Rescues by air and sea were the only option.

Florida Task Force 1 was among eight Urban Search & Rescue teams working with the U.S. Coast Guard and National Guard to complete rescue missions the day after Hurricane Ian made landfall September 28. The storm came ashore as a Category 4 hurricane with 150 mph winds. It generated a storm surge that swallowed coastal cities in Lee, Collier, and Charlotte counties before the storm moved across the state and caused historic flooding from central to northeast Florida.

Mandatory evacuations had been in place on those counties' barrier islands before the massive storm hit, but some residents stayed behind.

By the evening of September 29, more than 700 people had been rescued from Florida's Gulf Coast, according to Gov. DeSantis. Miami-Dade Fire Lieutenant Alex Acosta said Task Force 1 rescued more than 40 people, extracting them by helicopter.

"Ultimately we're hoping not to find any kind of casualties ... but we know that's probably not going to be the case. So we know that we're ready to help out in any way we can," Florida Task Force 1 member Eduardo Alarcon said before deployment.

President Joe Biden hinted at the possibility of a dire death toll from Hurricane Ian.

"The numbers are still unclear but we are hearing early reports of what may be substantial loss of life," Biden said at a September 29 press conference held at Federal Emergency Management Agency (FEMA) headquarters. 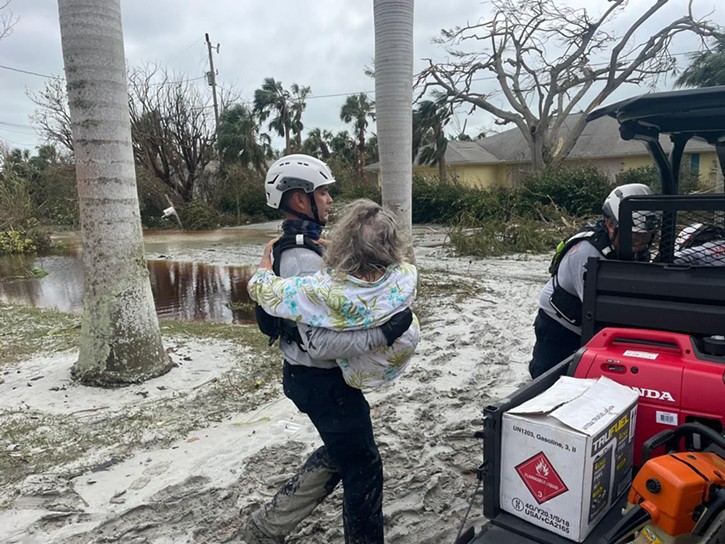 As the days go on, Florida Task Force 1 members will be sleeping on cots in ready-built barracks. The crew, along with other Urban Search & Rescue teams, bring their own food and supplies "to avoid being a burden to the community" in post-disaster settings, Chief Jadallah said.

Task Force 1 is no stranger to navigating disaster zones. Many of its members spent weeks covered in dust while searching for survivors in the rubble of the Champlain Towers South building collapse in Surfside last year.

In years past, the task force has provided aid in disaster zones across the globe. It helped out in the recovery efforts following the 2010 earthquake in Haiti, Hurricane Katrina in New Orleans in 2005, the September 11, 2001 terrorist attack on the World Trade Center, and dozens of other catastrophes.

The crew is part of a nationwide network of Urban Search & Rescue (US&R) teams that work with FEMA to provide disaster aid. US&R teams provide a wide range of services in addition to search and rescue: structural assessments, emergency medical care, engineering, and logistics planning, to name a few.

Jadallah said that 96 members of Florida Task Force 1 are in the field. High-water vehicles, rescue boats and a convoy of tractor trailers were brought to the Gulf Coast to support the rescue mission. The City of Miami Fire Department's US&R team, Florida Task Force 2, is working in conjunction with the Miami-Dade Fire Rescue contingent on the mission.

"I told them they're the very best of Miami-Dade, how extremely proud I am. I had the honor of working with them during Surfside, and I'm not surprised how brave, how selfless they are," Ramirez said after meeting with the crew.

Miami-Dade County Mayor Daniella Levine Cava, who also spent time with Task Force 1 in the aftermath of the Surfside tragedy, called them "one of the finest search and rescue teams in the world."

"Just like Miami-Dade received a world of support after Hurricane Andrew hit us 30 years ago, it's our turn to support our fellow Floridians. We are praying for all those who have lost their homes or their livelihoods, and want them to know they are not alone," Levine Cava said in a statement.

She told the team as they prepared to go to Sanibel, "I know you will not rest until you've done everything in your power to help everyone in your path." 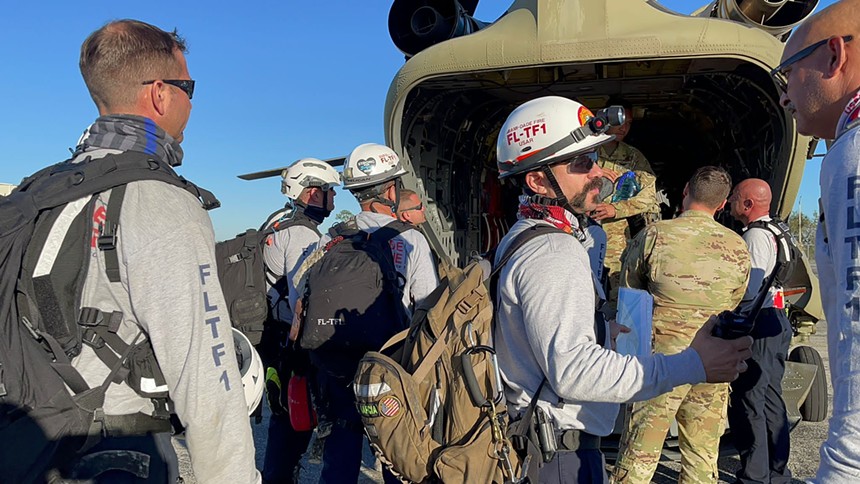 Miami-Dade Fire Rescue's Florida Task Force 1 rushed in to provide aid in the aftermath of Hurricane Ian on September 30.
Photo by Miami-Dade Fire Rescue
KEEP MIAMI NEW TIMES FREE... Since we started Miami New Times, it has been defined as the free, independent voice of Miami, and we'd like to keep it that way. With local media under siege, it's more important than ever for us to rally support behind funding our local journalism. You can help by participating in our "I Support" program, allowing us to keep offering readers access to our incisive coverage of local news, food and culture with no paywalls.
Make a one-time donation today for as little as $1.
Izzy Kapnick is a freelance writer for Miami New Times, covering environmental law, white-collar crime, and the healthcare industry. He has worked as a legal news reporter in South Florida since 2008.
Contact: Izzy Kapnick