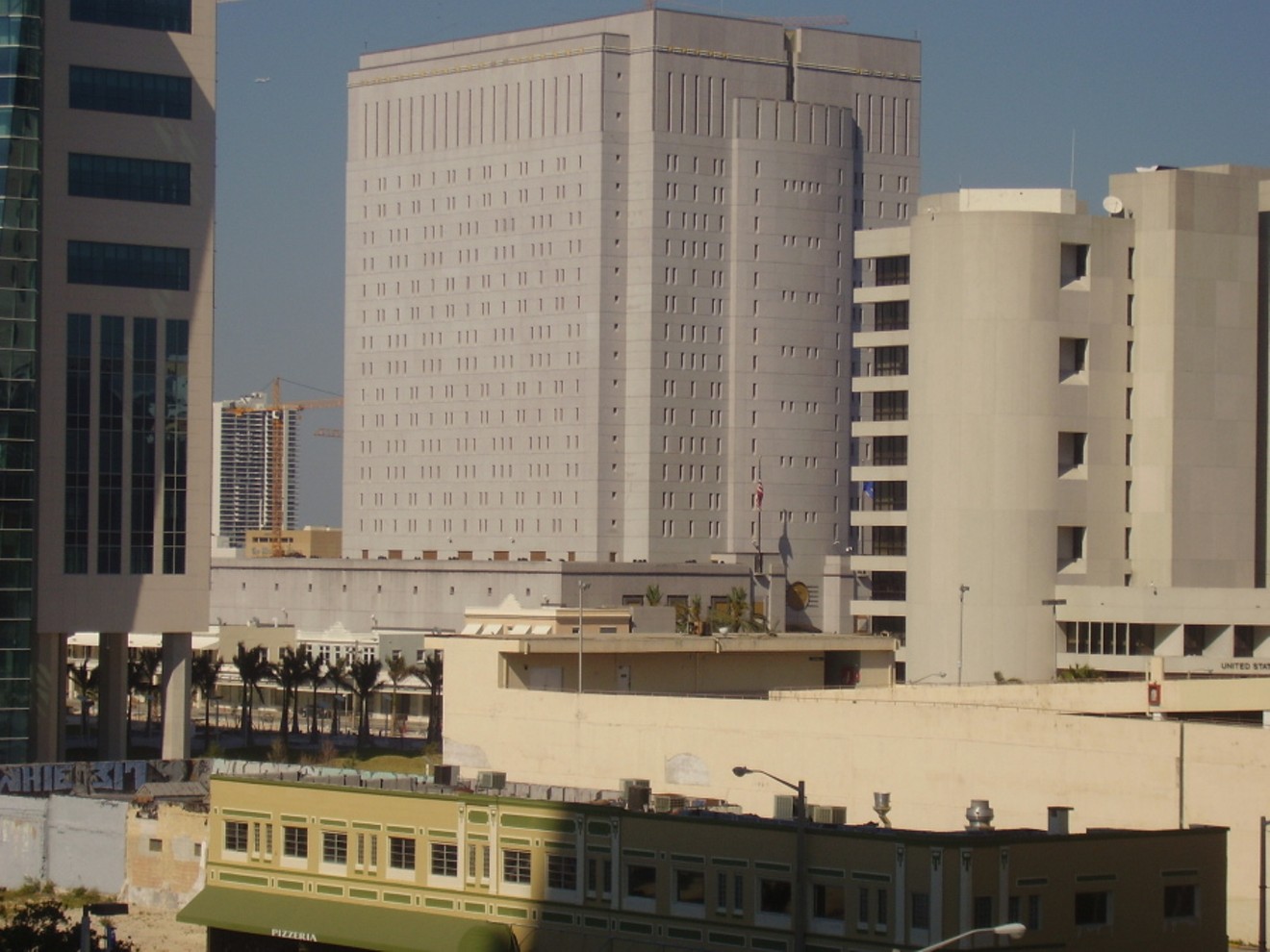 Miami-Dade County Jail Wikimedia Commons
Miami-Dade's jail system has been a mess for years. The downtown Pretrial Detention Center is now almost 60 years old. In recent years, the Department of Justice has blasted the county for operating leaky, roach-infested jails with overflowing urinals. And just last week, a correctional supervisor sued Miami-Dade for employment violations because the mold inside the detention center is so bad she can't breathe.

That's one reason Commissioner Esteban Bovo wants the county to consider partnering with a private investor to build a new jail.

Bovo has suggested financing a new jail through a "P3," a public-private partnership where a private investor fronts the money to build a project for a government entity, which returns an annual payment in exchange. At a Thursday meeting of the county's Chairman's Policy Council, Bovo, the chairman, brought in a representative from Barclays, an investment bank that jumped into the growing industry of public-private partnerships about a decade ago.

"You're transferring 35 years of cost and operating risk to the private sector, so it’s their problem, not yours," Jeff Mathews, Barclays' vice president of infrastructure and project finance, said while pitching that option.

P3 is common in other countries, but the model has gained traction in the States only over the past couple of decades. While public-private partnerships are becoming more ubiquitous for funding highways and transit projects, for-profit prison corporations such as the Boca Raton-based Geo Group have been leading the push for local governments to build facilities though P3.

Though the private-prison industry has grown exponentially in recent years thanks to harsh new immigration policies and support from conservative governors such as Rick Scott, the use of for-profit correctional facilities remains a contentious political issue. Critics of the prison-industrial complex say corporations such as Geo Group and CoreCivic squeeze extra profits out by reducing inmate services and wages for correctional officers, which can place both guards and inmates at risk. A 2016 analysis by the Office of the Inspector General showed that private prisons had twice as many inmate-on-staff assaults, 17 percent more use-of-force incidents, and 28 percent more inmate-on-inmate assaults than prisons run by the federal government.

At Thursday's meeting, Bovo insisted the financing model was "not privatization." But in a phone interview with New Times later that afternoon, he conceded that "it comes right up to the edge" of privatization, or what the general public would consider privatization. Bovo says the county does not have enough money to independently fund all of the infrastructure projects on its wish list.

"Our budget is only gonna get tighter," he says. "We're going to have to become more creative in how we fund these capital projects."

Funding a new jail through a private partnership could affect employment for the 3,000 people who work in Miami-Dade's corrections department. If the county agrees to let a private company operate the jail, it should ask for a contract that allows those employees to be retained, Bovo says.

"It's not good to turn around and enter into some sort of agreement and then wave away employees who have basically been the backbone of the system — in this case, a prison system — for a long time," he says. "As people retire, the question is then, how does that P3 hire new hires, and are those new hires a different class of employees who are paid less or have different benefits? Those are things that need to be addressed."

The Dade County Police Benevolent Association, which represents the county's correctional officers, did not respond to New Times' request for comment on the proposal.

The county has been eyeing partnerships with the private sector since at least 2015. At a conference that year about the P3 model, Miami-Dade Mayor Carlos Gimenez spoke aggressively in favor of outsourcing government operations to private corporations.

"It used to be Miami-Dade County wanted to operate everything," he said, according to the Miami Herald. "I don’t want to operate anything."

But critics say partnering with for-profit corporations can be risky for local governments. The contracts often include "compensation event" clauses that force government entities to pay out if something happens that reduces expected revenues. The City of Chicago, for example, had to pay its parking meter contractor $61 million after closing several roads for construction and festivals.

Donald Cohen, executive director of the San Diego-based think tank In the Public Interest, says P3 proponents often argue that the agreements aren't technically privatization because the government still owns the facility — a position he says misses the point.

"The issue is not who owns it. It’s how are their interests embedded in this long-term lease, and what kind of control does that give them?" he says.

When it comes to jails, public-private partnerships give corporations an incentive to fill the beds with inmates, Cohen says.

"No matter what happens to the populations, they will write things in that contract... to make sure they've got a baseline of revenue to keep them making money," he says. "Bed guarantees are the equivalent of the parking-meter deal, and they have them in all the contracts."

The discussion Thursday was strictly informational and did not involve a vote. Bovo says he views P3 as simply "a tool."

"If we want to be serious about addressing some of these crucial items in our county," he says, "we need to understand that funds are limited and this is only a tool — not the end-all, but a tool — we could possibly use to get some of these programs up and off the ground."
KEEP MIAMI NEW TIMES FREE... Since we started Miami New Times, it has been defined as the free, independent voice of Miami, and we'd like to keep it that way. With local media under siege, it's more important than ever for us to rally support behind funding our local journalism. You can help by participating in our "I Support" program, allowing us to keep offering readers access to our incisive coverage of local news, food and culture with no paywalls.
Make a one-time donation today for as little as $1.