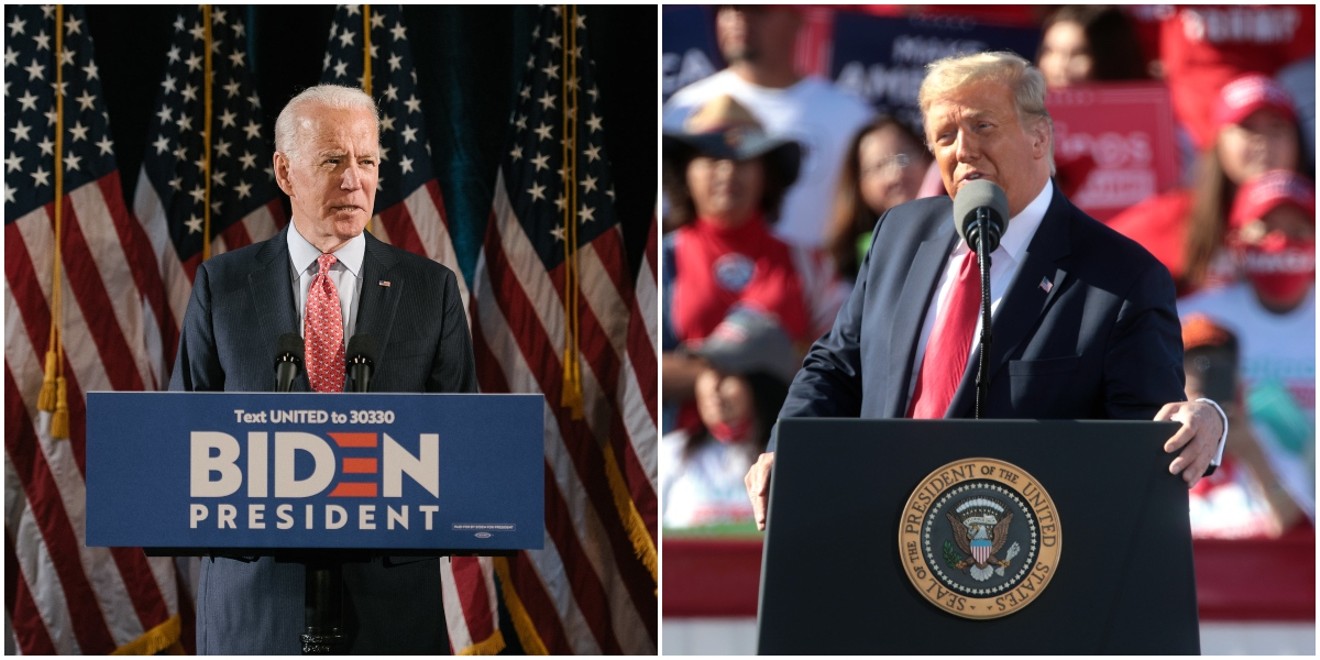 Will Florida go for Joe or stay on the Trump Train? Photos by Photo News, Gage Skidmore/Flickr
Happy (?) Election Day, Miami! If you've already stress-eaten every last bit of your leftover Halloween candy, we're right there with you. It's been a helluva day in a helluva election season in a helluva year. And it's already shaping up to be one long night.

This year was free of any last-minute, pre-election bombshells, à la the Access Hollywood tape. But the presidential race is still expected to be a nail-biter. According to Nate Silver's FiveThirtyEight, Democratic nominee Joe Biden has an eight-point lead over Republican President Donald Trump, but — as we all learned in 2016 — that doesn't mean Trump won't declare victory.

Once again, Florida will play a major role in determining the outcome: Pollsters pretty much agree that whoever wins the Sunshine State and its 29 electoral college votes has a much clearer path to the White House.

This year's ballot is a loooooong one in Miami-Dade County. While Trump vs. Biden is obviously the big story tonight, there are lots of down-ballot races and issues that could have a major impact on the lives of Miami-Dade residents.

Four of South Florida's congressional Democrats are fighting to hold on to their seats. Miami-Dade County commissioners Esteban "Steve" Bovo and Daniella Levine Cava — a Trump-supporting conservative and a progressive liberal — are vying to become the next county mayor. And Florida voters will decide whether or not to increase the state's minimum wage, which currently stands at $8.56 an hour.

Tonight, New Times is here to deliver coverage of those races and more. For live updates, scroll down to the bottom of this post. In the meantime, you can track the results below as the ballots are tallied starting at 7 p.m.

Amendment 3
All voters vote in primary elections for state legislature, governor, and cabinet
Yes/No (measure failed because it garnered less than 60 percent of the vote)

10:35 p.m.: Sen. Marco Rubio, who apparently is very invested in Trump winning Florida, is frantically tweeting about why "the networks" haven't called the election for the president yet.


If they don’t call #Florida at 10pm ET please put on the air the genius who can explain how Biden makes up over 300000 votes.

Rubio made the news recently for going "full Trump," as CNN put it, during the president's Sunday rally at the Miami/Opa-locka Executive Airport. Trump praised supporters who swarmed a Biden campaign bus in Texas and tried to run it off the road. Trump called his supporters "patriots" who "did nothing wrong." Rubio also voiced support for Trump supporters attempting violence against Biden supporters.

"I saw yesterday a video of these people in Texas," Rubio told the crowd before the president arrived at the airport. "Did you see it? All the cars on the road, we love what they did, but here's the thing they don't know. We do that in Florida every day."

In local election news, former City of Miami commissioner Keon Hardemon has nearly 67 percent of the vote for the District 3 Miami-Dade County Commission seat, which was vacated by outgoing commissioner Audrey Edmonson. District 3 covers communities like Little Haiti, Liberty City, Overtown, and Edgewater. His opponent, Gepsie Metellus, told the Miami Herald that although she likely won't win, she refuses to concede.

Cindy Lerner, the former mayor of Pinecrest, and Raquel Regalado, a former Miami-Dade School Board member, are neck-and-neck in the race for District 7 of the Miami-Dade commission. Lerner has 49.38 percent of the vote to Regalado's 50.62 percent. Whoever wins will represent parts of Key Biscayne, Brickell, and Coconut Grove.

Florida state Rep. Kionne McGhee is leading the race for the District 9 county commission seat, which covers parts of Homestead, Florida City, Perrine, and Goulds. McGhee has about 54 percent of the vote. His opponent, former Homestead City Council member Elvis Maldonado, has 46 percent of the vote.

Giménez ran as a conservative closely allied with Trump, and he enjoyed an endorsement from the president in his congressional bid. Despite widespread disdain for Giménez’s coronavirus lockdown policies, including an ongoing curfew that has hampered local businesses, he came out on top with a three-point lead ahead of Mucarsel-Powell, with most precincts reporting.

Giménez, a former fireman who served two full terms as the mayor of Miami-Dade County, has already declared victory at a press conference outside his home, where he derided "socialism" and "extremism," promising to fight for the “foundations of the United States."

But Mucarsel-Powell has not yet conceded.

"This election has seen historic levels of turnout in Florida and across the nation, and we are still waiting for all the votes to be counted," her campaign said in an email. "What we are seeing now is our democratic process at work. I look forward to a final result when the votes have been counted and everyone’s voice has been heard."

Cava will be Miami-Dade's first female mayor in the county's nearly 200-year history. She is also the first non-Hispanic mayor in decades. Cava ran as a progressive who openly supported Joe Biden in the nonpartisan race. Her opponent, Bovo, ran a staunchly conservative campaign with Republican hallmarks like Trump allyship, a pro-police agenda, and, uh, Goya beans.

Cava celebrated her victory on Twitter by shouting out low-income families, frontline workers, and small-business owners struggling in the current economy.

8:33 p.m.: Versailles' ventanita is where politicians go to court Cuban-American voters and pretend they can handle a shot of cafecito. Bill Clinton, Mitt Romney, John McCain, and even President Donald Trump have campaigned at the Little Havana restaurant and bakery. It's where Miami goes to bang pots and pans when the Miami Heat wins championships, and where we protest — or celebrate — significant policy changes and events.

True to form, the restaurant has become the official party headquarters for Cuban-American Trump supporters in Miami.

In what seems to be a blowout so far, Keon Hardemon is blasting ahead of opponent Gepsie Metellus by 31 points in the race for Miami-Dade County Commission District 3. Hardemon is beating Metellus in every regard so far, including vote-by-mail, early voting, and Election Day results.

Hardemon seems all but assured to make the jump from the Miami City Commission to the Miami-Dade County Commission after tonight.

Further north in Palm Beach County, it seems we can safely breathe a sigh of relief that not all of Florida is batshit crazy — the AP has called the race for Florida Rep. Lois Frankel, the incumbent Democrat running against far-right activist and provocateur Laura Loomer.

Loomer, famous for being "the most-banned woman" on the internet after her racist and inflammatory comments have gotten her kicked off of multiple social media platforms, caused an upset when she won the Republican primary in Palm Beach County. Luckily, Palm Beachers got their heads on straight and realized a woman who makes a living out of trespassing onto politicians' lawns and proposing an anti-Muslim rideshare service might not do so hot with any real political power.

8:05 p.m.: Florida is the state everyone loves to hate. The Sunshine State has literally been ranked as the worst in the nation based on just about every metric. Florida is also the battleground state of all battleground states come election season, and the New York Times is already saying it's 95 percent likely that Trump will win it. Put all those things together on perhaps the most divisive Election Day ever, and you'll get a host of angry people shitting on Florida for being the worst... again.


How Florida pulling up to the election pic.twitter.com/3hzsI8Bf37

I've been in a psychologically abusive relationship with Florida every single election night since 2000.

florida be making me more stressed than my social anxiety fuck this shit #ElectionNight pic.twitter.com/Lotv8GmQc0

A nail-biting 14 minutes after the polls closed, Miami-Dade has reported all early votes and some vote-by-mail ballots. Joe Biden is in the lead in the presidential race... for now.

6 p.m.: One hour until the polls close in (most of) Florida!

In the meantime, try to decide which one of these tweets is more Miami.


I just spoke with 28yr-old Miamian Alex Garcia. He said he woke up today thinking he was going to vote for Trump BUT he changed his mind at the voting booth. He ended up picking Biden to “go back to normal.”

“I just want my Instagram to be about me again, and how good I look”