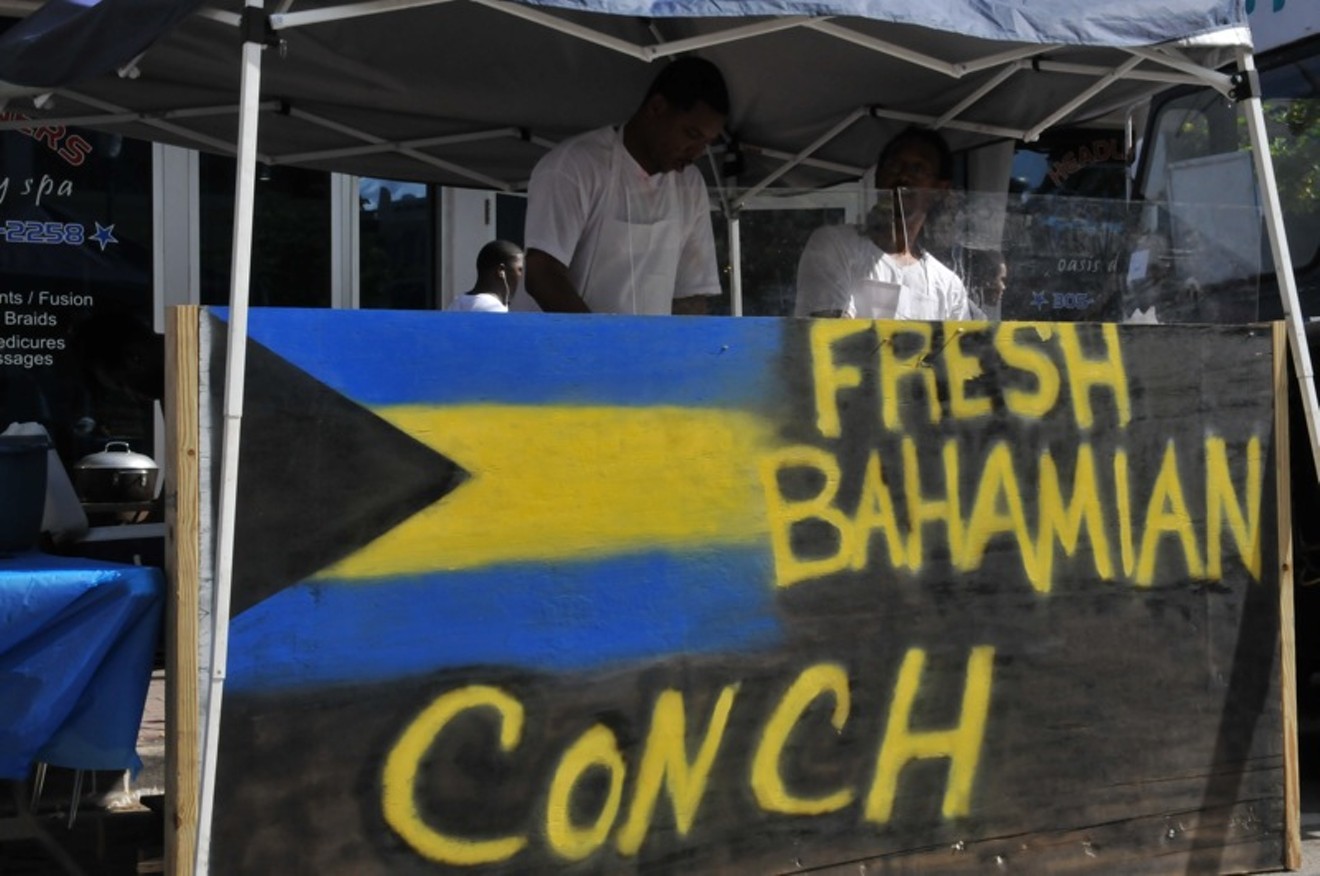 A scene from the 2011 Coconut Grove Goombay Festival Photo by Yesenia Hernandez
Miami has no shortage of cultural enclaves with "Little" in the name: Little Havana for the Cuban community, Little Haiti for the Haitians.

After this week, a new Little neighborhood might join the Little family.

As soon as today's (June 9) Miami City Commission meeting, city officials may hear a resolution sponsored by Commissioner Ken Russell to name the western portion of the city's Coconut Grove neighborhood "Little Bahamas of Coconut Grove," in honor of Miami's history of Bahamian settlement, if lack of community consensus doesn't delay the item.

"The time is right to do this now. When my generation who knows the value of our Bahamian culture is gone, there will be no remembrance of us," says Freddie Lee Young, education chair for the South Dade branch of the NAACP and a supporter of the name change. "People don’t know the history of the Bahamians and their involvement in building Miami and Coral Gables."

Before there was a City of Miami, some of the first settlers in what is now known as Coconut Grove were white and Black Bahamians who put down roots around the land now known as The Barnacle Historic State Park, south of Dinner Key. In the late 1800s and early 1900s, more Bahamians came to the Grove and built homes and worked as artisans and laborers on many of the now-popular landmarks of modern Miami like Villa Vizcaya and the city of Coral Gables.

As more white residents came to Coconut Grove and took over the eastern portion of the neighborhood, the west part came to be known as the "Black Grove" — a mostly Black enclave with a history of civil rights activism and political clout. But over time, gentrification and economic forces have pushed out much of Coconut Grove's Black and Bahamian population and the West Grove has declined as once-thriving businesses closed down. Longtime West Grove residents have been working to bring affordable housing and economic opportunity to the neighborhood in order to preserve the West Grove's history and character.

Now, with backing from the NAACP, the Greater Miami Host Committee, and U.S. Rep. Frederica Wilson, some advocates look forward to designating the West Grove as the "Little Bahamas of Coconut Grove" as a way of bringing back the culture and economic energy of the historically Bahamian community. The proposed area will include the Village West Island District and the Charles Avenue Neighborhood Conservation District south of U.S. 1 and west of McDonald Street.

The proposed borders of "Little Bahamas of Coconut Grove," including parts of the West Grove historically settled by Bahamians in the late 1800s.
Photo via City of Miami
Though the item is on the commission agenda for today, Commissioner Russell tells New Times it may very well be delayed because there isn't enough support from community groups in West Grove. Two groups that said they would issue letters of support for the item, the Coconut Grove Ministerial Alliance and the Village West Homeowners and Tenants Association (HOATA), have delayed issuing them to Russell's office pending more discussion.

"This could and should be the Bahamian enclave it once was, the question is whether there is the political will to do so. I won't do this without the will of the community," Russell says.

Clarice Cooper, president of HOATA, a group that advocates for tenant and homeowner rights in the West Grove, tells New Times that while she won't oppose calling the neighborhood Little Bahamas, she feels it's a move that's come too late for the community.

"My personal feeling is that I think it's one of those situations where it would’ve been more impactful if it was presented 30 or 40 years ago," Cooper says. "Even if we had a Bahamian proliferation, our business visibility isn't what it used to be. We're almost like a wasteland compared to before."

Cooper explains that while several descendants of Bahamian settlers still live in the West Grove (herself included), many have moved away and there has been a concurrent influx of African Americans who have no ties to the Bahamas and might feel excluded by the renaming. She's also unsure how the existing business infrastructure can support the prospect of becoming a tourist destination.

Whereas Little Havana earned its moniker in the 1960s when Cuban exiles left their homes on the island and settled in the area, and Little Haiti gained its name when the Haitian diaspora poured into Lemon City in the 1980s and 1990s, some feel "Little Bahamas" is about 100 years too late.

Representative Wilson, herself a Bahamian American, shared a letter of support for the renaming resolution on Twitter this week, noting that while Miami is known as a city of immigrants, the Bahamians who helped to build the city are often unacknowledged.

"This is gonna unite the community and bring in more Bahamian culture back to Coconut Grove," Wilson predicts. "This is meant to benefit a community that through the years has been decimated."

As a proud Bahamian American, it’s personally important to highlight the contributions of some of our first Miamians. Recognizing Little Bahamas would be a symbolic step toward inclusion for residents of all backgrounds, especially during #CaribbeanHeritageMonth. pic.twitter.com/js7lRzIYlH

Earlier this year, Wilson announced that she had secured Congressional funding to build a Bahamian museum and cultural center in Coconut Grove, which she says will serve as an anchor for cultural and economic revitalization. She tells New Times that after the name change, she expects to bring in restaurants and a straw market to tie into Bahamian culture.

Young, who was born in Coconut Grove to Bahamian parents, says that while many Bahamians have departed, she hopes the renaming will bring them back — and bring tourism and new Bahamian families and revitalize the area.

"We have Bahamians all over Florida. Some left because of the gentrification but we’re hoping they come back," she says. "We hope that with the efforts to have affordable housing and business, we can bring back the culture and have it as a thriving community like Little Havana."

If today's resolution is delayed, Russell says he will have more community education sessions about the renaming and the item will come up again at the next city commission meeting.
KEEP MIAMI NEW TIMES FREE... Since we started Miami New Times, it has been defined as the free, independent voice of Miami, and we'd like to keep it that way. With local media under siege, it's more important than ever for us to rally support behind funding our local journalism. You can help by participating in our "I Support" program, allowing us to keep offering readers access to our incisive coverage of local news, food and culture with no paywalls.
Make a one-time donation today for as little as $1.